English rugby league grapples at Wembley with the impact of expansion

It was a comment offered by a passerby in the carpark across from Macron Stadium between games at the Challenge Cup semi-final double-header – it was brief but said so much: “we’d better get used to it”.

St Helens had just been stunned by Catalans who marched onto Wembley where they will meet Warrington this Saturday. What, exactly are we “getting used to”?

A clue: the number one thing we’ll all be talking about between now and kick-off at the national stadium on August 25: the attendance figure.

It’s intriguing that even the most progressive, neutral rugby league fans a few weeks back seemed to want a Saints win. When you’re an RL leftie, what’s the worst of two evils: a cherished expansion team missing out on the Challenge Cup final or a half-full Wembley?

Clearly, for many, it was the former. We love expansion but we worry more about what outsiders think of us.

St Helens’ Mike Rush, in a recent podcast interview, expressed concern that if Toronto, London and Toulouse all go up next year, they’ll lose out on gate receipts and sales of hot dogs and pies.

What we have to “get used to” is the fact that they might one day be joined by New York, too.

This is an old argument. Super League clubs don’t want to accept that modern professional sport does not live on away fans. It survives on TV money and if you don’t get enough of that, you’re part-time. Do the San Francisco 49ers complain that the Buffalo Bills don’t bring enough fans because it’s a 30-hour drive?

If you’re relying on away fans to exist, you probably don’t deserve to exist. That world is gone, kaput – along with liquid paper, pagers and fax machines.

But what Wembley does is bring this into sharper focus. If you are a serious national club sport with an international dimension, you have to learn to accept some of the teams you allow into the competition might actually make finals.

Not only do clubs have to learn to live without away fans, the game itself has to do so. The game itself, like the clubs, has to learn to fill stadiums with people who actually live in the place where the games are being played.

Desperate times call for desperate measures. One of them was the semi-final double-header, such a success that the RFL and Super League now have a completely new property on their hands to add to Wembley, Magic, the grand final and home internationals. 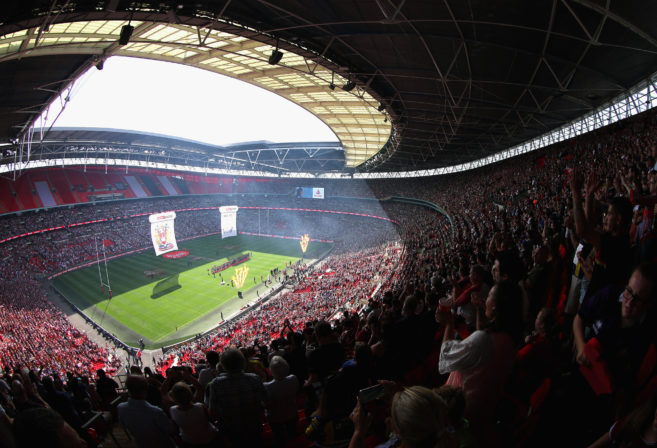 Likewise, the poser caused by Catalans being at Wembley will hopefully help the sport learn to engage with the French community in the UK, to dig deeper into London people who don’t normally go and to value-add to events.

The Toronto Wolfpack engaged the Canadian Embassy and Canadian military when they transferred a home game to London in May; can we do the same with the French government? Let’s make it a day London celebrates the ties between the countries.

What if the recent London Nines was on the same weekend as Wembley and every player got a ticket? The events promote each other. What if a lower division play-off or Super 8s game was played as part of a double header on Challenge Cup day? Hell, team up with other sports!

The same goes for the clubs and regular season games next year. In the NRL, Sydney clubs transfer lower-drawing games to regional venues. If you’re going to go to Dublin or Coventry with a Super League match, perhaps having Toulouse, Toronto and London in the competition will give you the impetus to actually do it.

There is no going backwards. The world has changed. Challenges are just opportunities in disguise.