How the 'Guzzler’ chowed down on the Wallaby lineout at Sydney

It was all so very, very different 40 or 50 years ago. In the good old days, the lineout was a free-for-all.

There were 16 large, hairy forwards crammed into an area about half the size it is now, breathing threats into each others’ faces.

Offers of amateur dental work freely on offer, the lineout was just another platform for ‘the biff’ to kick off.

As soon as the ball was thrown in (typically by the winger in those days), all hell broke loose. Shoulders banged together with juddering force, elbows and arms flailed across the line – masquerading as ‘competition for the ball’ – and toes were crushed underfoot routinely.

Space was for the birds, and you were lucky if you got off the ground to jump for the ball at all. Clean catches were a hopeful mirage in the desert of the inhospitable.

The old Pontypool second row of the 1980s, John Perkins, was one of the smaller men in his position, at only six foot two inches tall and weighing 15 stones dripping wet. But ‘Perk’ was like a block of granite, mentally and physically.

“If my opponent was taller than me, which he invariably was, I’d just let him jump at the first lineout. As he’d go up into the clouds, I’d throw an arm or an elbow across, so that it hit him square in the bollocks. Accidentally, of course.

“That would really discourage him, and he’d get a lot shorter after that.”

As the game entered the professional era, the lineout was sanitised, along with other areas of the game. In 1992, the one-metre gap between the two lines of forwards was introduced, and a few years later lifting was legalised, with the idea of encouraging support players to concentrate on their own receivers rather than causing mayhem, à la Perk, in opposition ranks.

In 2008, pre-gripping on the receivers was permitted, while refereeing around the issue of playing an opponent in the air has become ever more unforgiving.

The lineout has followed the trend in other areas of the forward game like the scrum and breakdown, with small changes in the law always tending to favour the side already in possession of the ball. 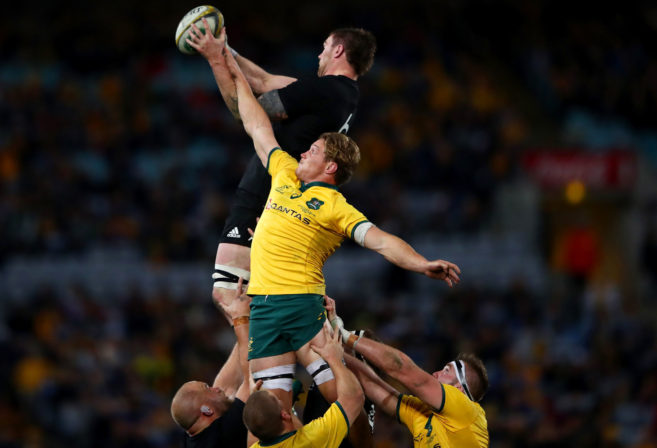 In the professional era, winning 80 per cent of your own lineout throw has become the watermark of an acceptable return. But that is a bare minimum, and 90 per cent is now a reasonable expectation for a well-run unit.

On Saturday evening in Sydney, the Australian lineout experienced one of the most dramatic collapses of recent years in any part of the world. Of the 11 lineouts at which either Tatafu Polota-Nau or Tolu Latu delivered the ball, only three were won cleanly, with a fourth won fortuitously after an initial miss, and seven lost – a meagre 27 per cent clean ball return.

In addition to the four scrum penalties given away, that represented 11 bits of primary possession given up, and no team in the world can win a game of international rugby with those raw stats.

That was the beginning and the end of the story for the Wallabies against the All Blacks at Stadium Australia.

One obvious idea is to dispense with the twin open-side backrow and pick another potential lineout receiver (Caleb Timu or Ned Hanigan) instead of either Michael Hooper or David Pocock to the bench. It would be a Faustian pact: whatever improvement it might yield at lineout would demand big concessions in other areas of the game.

Additionally, it would not address the more fundamental issues of why the Wallaby lineout collapsed so completely in Sydney and failed to find a route to recovery, losing five of its seven throws in the second period.

Since the beginning of the 2017 Rugby Championship, Adam Coleman has led the Aussie lineout in ten games with a respectable retention rate of 88.2 per cent. The lineout reached its optimal peak with Jack Dempsey in the team at number six for three games, when the win rate jumped to a high of 93.8 per cent.

All games featured two small men in the back-row, with Hooper and Sean McMahon a constant presence in the run-on side throughout.

Therefore the Saturday evening collapse in Sydney swam against the tide of recent history, and it is worth making an effort to understand the reasons why.

The early underminings were all engineered by the ‘Guzzler’, big Brodie Retallick. Brodie likes his food but, if anything, his appetite for opposition lineout ball is even more insatiable. It was Retallick’s ability to compete at the front end of the lineout which shook Coleman’s calling to its foundations.

Coleman started by calling the same throw to two short lineouts on the All Black 22 within the first five minutes:

With three of the shrewdest defensive lineout operators in the world on the field in the shape of the Guzzler, Kieran Read and Sam Whitelock, it always represents a risk to repeat the same call in such a short time-frame once you’ve given your opponent a look at it – one look is all they need before reacting effectively: 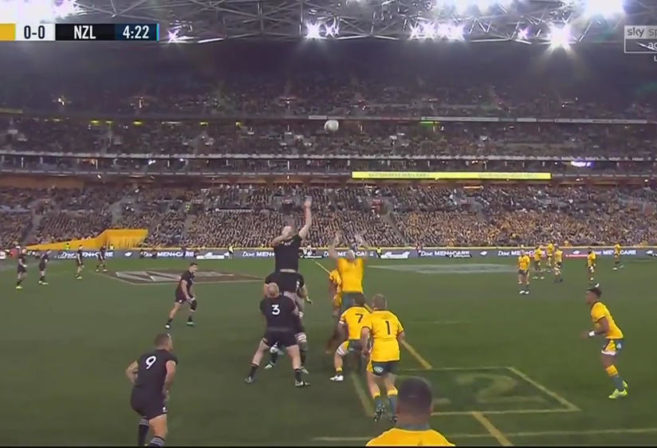 At this fifth-minute lineout, Retallick is looking straight down the line at Tatafu Polota-Nau when he delivers the ball, and is into the air well before Izack Rodda to steal the ball cleanly.

That should not have happened. It was a poor call by Coleman, which had the effect of bringing big Brodie into serious play at the front of the defensive lineout:

Both these examples are excellent illustrations of Retallick’s ability to mirror the receiver and his movements. He starts by facing his opponent across the line, which enables him to match the rhythm of any likely receiver who enters his zone – Izack Rodda in the first instance, Coleman in the second.

Like Tui, both Rodda and Coleman have ‘heavy feet’ and need two steps to get elevation into the air, which gives Retallick all the time he needs in order to react effectively. They are beaten on the ground before they are ever beaten in the air.

Other problems were associated with the Wallabies’ use of formation. When Coleman went to a longer line he called six men rather than a full hand of seven, with Pocock left out in midfield. One of the negatives with a six-man line is that it simplifies lineout defence – the opposition can break easily into two pods of three because of the even numbers: 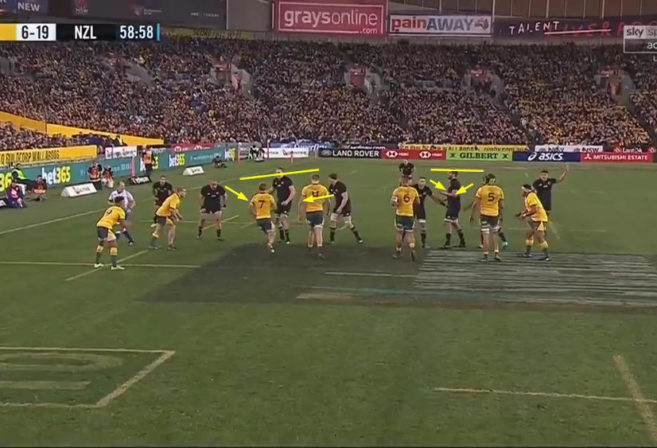 The two Kiwi pods (on Retallick at the front and Whitelock at the back) are already formed and ready for action.

A smart lineout team will vary the spacing between their players – leaving for example a gap in the middle – to break up the cohesion of those defensive pods, but the Wallabies used uniform spacings throughout:

In the first instance, Retallick once again picked the target, Hooper, early and matched rhythm with his movements to effect the steal – there was no attempt made to decoy him away from the ball.

The second example leads into the final element of the lineout catastrophe. Having played Retallick into the game at the front, Coleman was forced to use longer throws to try and ease the pressure in the second period.

All three of the deliveries to that area were underthrown by either Latu or Polota-Nau, and it is never been a strength of Taf’s game:

It was a disastrous domino effect, with one difficulty creating another even more serious problem. The Australian lineout was forced to go to much higher risk calls from the 54th minute onwards in order to alleviate a pressure which could have been avoided in the first place.

Summary
The days of the amateur era lineout are long gone. Pressure comes in the form of excellent reading and anticipation skills and speed into the air, rather than a whack in the crown jewels.

Michael Cheika will inevitably come under a lot of pressure to adopt a radical solution to the lineout disaster in Sydney. He will be invited to drop either Michael Hooper or David Pocock from the run-on side and select another novice back-rower instead.

The knock-on effects of that solution in other areas of the game will probably be ignored, as will Adam Coleman’s generally excellent record in leading the Wallaby lineout over the past couple of seasons – a unit which has always included two small backrowers.

In reality, their lineout problems are mostly fixable without resorting to such drastic measures. Changes in formation, better individual technique and improved calling variations are the order of the day.

Coleman’s positioning at the back of the lineout should also be reviewed. Every other top-tier lineout has the captain at its heart and in the middle of the line, where communication is easier and he can be involved in the majority of throws as either a receiver or a lifter – Coleman was only involved in four of 11 at Sydney.

In the longer term, the return from injury of Jack Dempsey – who is much the quickest Australian receiver off the ground – will help greatly, and I would be surprised if Lukhan Tui sticks at six after Dempsey comes back.

For next week’s match in Auckland however, Cheika may just have to work with the limited material he has at his disposal and make do. If he can start by preventing the Guzzler from eating everything on the plate in front of him, it will be a good beginning.