We’ve all heard about how Collingwood’s makeshift defence might impact their September campaign. But it’s actually the performance of the small forward brigade that the Pies will live or die by in the finals.

Let’s look at their side from all areas on the field.

We have all heard the names to go down this season from the Pies’ back end.

It started with Tyson Goldsack very early, Brayden Maynard missed a few, Taylor Adams went out when playing at half back, Darcy Moore, Ben Reid (no surprise really based on his injury history), Lynden Dunn, Flynn Appleby, Moore again, Matthew Scharenberg, Moore again and even Jeremy Howe now with a seemingly four-week cork.

The Magpies have cobbled together an acceptable makeshift defence with first-year players like Jack Madgen and Nathan Murphy now supporting the established Maynard, Tom Langdon and Jack Crisp. Howe should return this week.

For Darcy Moore, it wasn’t just that he’s missed most of the season with injury, it’s that the season itself was meant to educate him into becoming a key defensive post.

Even if he still returns, he hasn’t had the time to blend with the backline and learn his craft at the highest level that the club had planned for the home-and-away season.

Based on his 2018 record, the club will have to decide if it is worth risking him this year even if passed fit. You don’t want to go one rotation down first quarter in a final. Based on 2018, it is a huge risk to play him even if ruled fit.

One thing is for sure, if he heads to Sydney in the offseason, his hamstring concerns go with him. His manager, Liam Pickering, has without doubt stalled on the Moore contract offer from the Pies in order to wait and see any extra money is available should the Pies, as expected, lose the Lynch chase.

It is a strategy that has backfired. 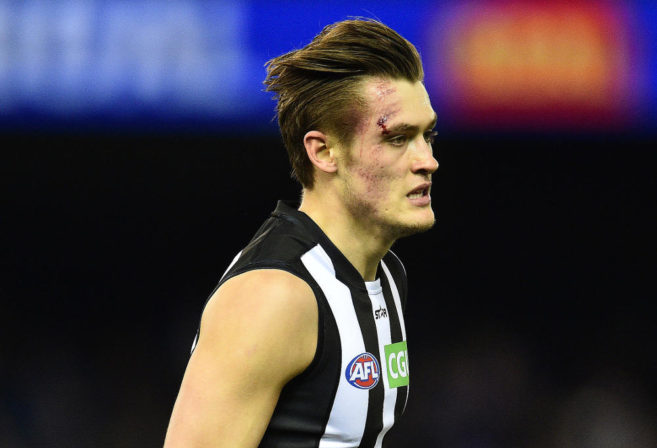 Moore has great potential, but Pickering will be dismayed that Moore’s stock value has actually gone down instead of up this season thanks to recurring injuries. Perhaps the contract offer that was on the table all season might just be rescinded.

The Pies have had a fairly stable midfield in 2018, despite the carnage with injury down back. Steele Sidebottom, Scott Pendlebury, Taylor Adams and Adam Treloar are all elite midfielders and only Treloar has gone down for any significant length this year.

Treloar is back running and kicking, but realistically needs everything to go right for a return in weeks two or three of the finals.

Adams’ inside-mid game has gone to a new level in 2018, and he may well win the Copeland he lost by one vote last year to Sidebottom.

Outside run is supplied by Tom Phillips, Sam Murray, Sidebottom, Crisp and James Aish – who himself is only just back from a long rehab. De Goey and Josh Thomas take midfield rotations when required.

Chris Mayne is fitter than he has ever been and has been a great story in 2018, playing a very team-based defensive wing role.

Brayden Sier has been a big bodied long-term project recruited in a surprise at pick 32 in the 2015 National draft. At six foot three and 90 kilos, he is not blessed with pace but instead relishes inside support work for Adams by bullocking opponents out of the way with his ample shoulders.

Gerard Healy has already compared him to a very raw early version of the Swans’ Josh Kennedy.

With early season injuries and a depleted defence, Maynard has not been able to get back in the midfield where he showed real promise in the final game of 2017 against Melbourne.

He’s still an ace up Nathan Buckley’s sleeve should the mids need an injection of aggression.

Levi Greenwood plays a great tagging role but the club has struggled to settle him in a position when no obvious tagging role has been present. 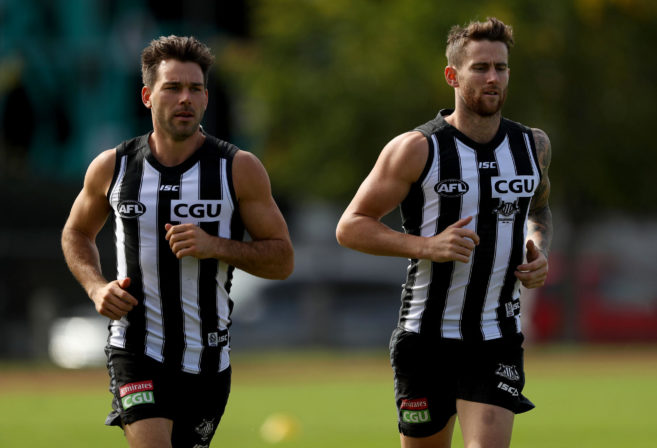 Levi Greenwood and Jeremy Howe have been valuable pickups for the Pies. (Photo: Robert Cianflone/Getty Images)

The biggest and most important player for the ‘Pies as the season has progressed has been Brodie Grundy. Once the ruck work is done, Grundy is simply a huge bodied extra mid.

Buckley has resisted any temptation to start Mason Cox in the square with Grundy acting as your old school ruck-rover but it would have been an interesting experiment against lower sides.

However, a glass half full approach means it has seen Taylor Adams’ game go to a new level, as well as allowing for the emergence of Sier.

Adams’ form culminated in arguably his best game for the club against Port Adelaide on the weekend, as he amassed 16 disposals, four score assists, five contested possessions, and 229 metres gained in a dominant 30-minute burst in the second quarter.

Adams has always been the inside mid the Pies needed but, with the loss of Treloar, Sier has come in as inside mid support. Now, Adams has started to burst clear of packs adding outside run and metres gained, something the Pies haven’t really seen from him before. He has also emerged as the heir apparent to Pendlebury as skipper.

Yes, the club lost Reid and Moore, who can potentially play forward, Tim Broomhead, who was earmarked for small forward, and Jamie Elliott who, unfortunately like Reid, was no surprise to be out injured.

However, there is a key quartet of forwards that have largely played nearly every game, and it is these four who have been the key to moving from a hit-and-miss forward structure of 2017 to a beautifully balanced forward line in 2018.

Jordan de Goey, Will Hoskin-Elliott, Josh Thomas and Jaidym Stephenson are the four mid-sized runners of the Pies new forward line. The tall supporting targets of Cox and Brady Mihocek have been providing the go-to marking target down the line and have kicked the odd couple of goals themselves.

In many ways, the quartet appear to take turns for the actual goals.

Add little cameos from Travis Varcoe and the mids popping up for the odd goal to the combined 39 goals of Mihocek and Cox, and it makes an interesting mix for the Pies that is not dependent on any one player.

It’s difficult to stop. Geelong stopped it the most successfully, keeping the Pies to just five goals by messing up the quality of the supply rather than focusing on the forwards themselves.

Cox or Mihocek are the go-to targets when the quartet aren’t in space. One of these games, the umpires might just have a day where they pay a lot of the holding frees and Cox could kick six.

In the meantime, his job is kept simple. Provide a down the line go to target, clunk a few marks, bring the ball down to feeding Magpies at his feet and kick the odd goal yourself.

Some of Cox’ feed work this year has been sublime and he also provides a break for Grundy in the ruck.

In 2019, Broomhead – and potentially Elliott – will also come into the small forward mix if fit.

Daniel Wells and Reid both have a year left and could also blend into the forward mix but neither can seem to get on the park. Goldsack, if he returns will be set for defence. Alex Fasolo seems destined for Carlton.

Tom Lynch is an interesting pursuit. He isn’t the be all and end all for the Pies, but he would take the Mihocek’s role – perhaps sending him to the backline – and potentially have Collingwood’s forward line-up there with Richmond and West Coast as the most dangerous in the league.

The Pies would be pleased to get him but also move on quickly if, as expected, he joins the Tigers.

With Richmond as the benchmark, let’s compare the Pies and Tigers forwards in 2018.

The Tigers are the most vulnerable, relying on Jack Riewoldt, but he hardly ever misses a game so in many ways it is a moot point.

Dustin Martin is also the other outlier in that he still spends more time in the midfield than pinch hitters De Goey and Thomas. The Pies six forwards above are largely full time forwards.

Riewoldt, Josh Caddy and Martin have combined for 36 goals the past four weeks. Taking out Jack’s bag of 10, it’s still a significant number from four players. Caddy is huge and deserves a strong tag.

Jack dominates here again, showing his importance to the Tigers’ back-to-back quest. He also has taken 42 contested marks this year, with Collingwood’s Cox sitting third in the competition with 46. 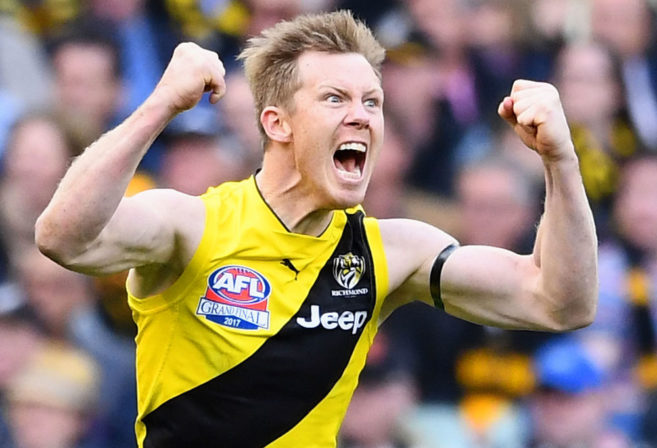 How important is Shane Edwards to the Tigers?

Martin and Riewoldt are the top two in the competition.

So what does that all mean in the context of the respective forward lines?

Richmond have become very Jack-focused in the second half of the year 0 and why not? He has kicked 60 himself and given off another 18.

For the Pies, Hoskin-Elliott is the closest with 39 and 16 assists.

The Tigers have Edwards running amok forward giving goals away, Caddy is a massive key to their fortunes and Dusty, who leads the competition in scoring involvements drifts, forward at his own discretion.

On the scoring ladder, Richmond sit second to Melbourne with 2045 points for, while Collingwood are not far behind in third with 1970.

One can argue the Magpies’ new forward line isn’t far behind Richmond’s in potential and is arguably less predictable.

Collingwood need to be bold and back their impressive midfield to feed their unpredictable forward structure and outscore the opposition rather than focus on a makeshift miserly defence.