If esports are too hard, try a fighting game

Esports can be difficult to get into. If you sit down and watch a game of Dota 2 while knowing nothing about it, you will get very little from the experience. First-person shooters are a bit easier to understand, but the real gateway to this world is through fighting games.

Anybody can have fun playing fighting games at every level. A complete beginner can walk up to the arcade cabinet or console, twirl the stick, mash some buttons and get immediate visual feedback that they can understand. You know that if you hit one button your character punches the other guy, and if you hit another he lashes out with a kick.

Above all, this simplicity makes it thrilling to watch. While spectating you begin to understand that anything can change at a moments notice. A player that might have had the upper hand in the first two games is suddenly shaken by an unexpected character pick or unorthodox strategy employed by his opponent.

Being at a large tournament for any sport is a hype affair, but esports bring a large sense of community to the setting. This is attributed to the arcade environment where these games got their start. To play with the best, you had to be at the arcades where they were.

As technologies evolved and home consoles and online gaming became the norm, this mentality has remained largely the same. Playing Dota online with nine other people you probably will never meet in your life is vastly different than going to a local tournament and sitting next to the person you are beating up in Street Fighter.

Large scale gaming events are notorious for hosting online qualifiers or being invitational tournaments. This makes it hard to really connect with the people you are playing against. With the exception of the end-of-tour competitions (like Capcom Cup, Tekken World Tournament) most fighting game events are open to the general public and these all happen on location.

It is through these interactions that the top personalities of fighting games have emerged. On a team, it is rare that all players will be of equal skill level. There will always be some standouts above the rest, SKT T1’s Faker springs to mind, but they never wholly take the spotlight. As an individual sport, individual personality, whether hero or villain, takes the stage.

Every sport has it’s great rivalries, Rabbitohs and Roosters, Real Madrid and Barcelona, TSM and CLG, but all of these are teams or organisations. It’s very rare for the players to actually buy into the rivalry. This isn’t the case in fighting games, every player represents only themselves.

Great fighting game rivals are built of differing personalities or play-styles, not their fans or location. The best recent example is between Sonicfox (Dominic McLean) and GO1 (Goichi Kishida) in Dragonball FighterZ. 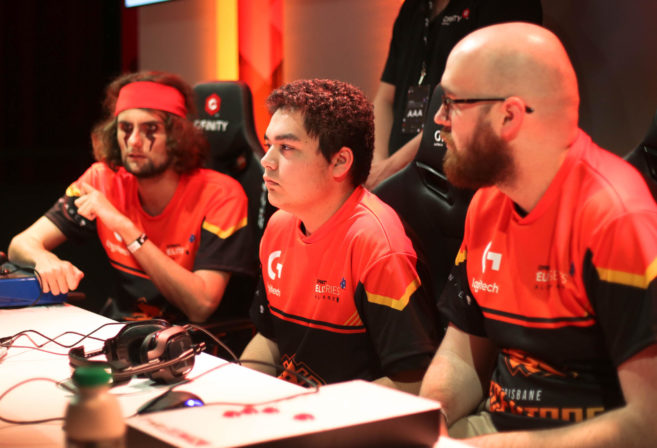 Both are champions of several other games, Sonicfox holds a monopoly over Mortal Kombat and Injustice while GO1 is widely considered the best Melty Blood player of all time. Sonicfox is a loud, outspoken American, while GO1 is the quiet Japanese genius.

The polar opposite personalities add to the fact that they are the undisputed top two.

During several tournaments throughout the year, they have met in the final and traded titles back and forth. GO1 burst out of the gate when the game was released back in February, quickly becoming the best. Things began to change as the year progressed however, with Sonicfox gradually reducing the gap between the two.

This culminated in a wonderful grand final set at EVO USA 2018 where GO1 came from losers to reset the bracket and put the fox to the test. Sonicfox held on after changing his play-style and side of the screen (which prompted accusations of cheating) to take the highly coveted trophy and become number one.

So if you’re bored with the Dota meta, or don’t fully understand how people can enjoy League of Legends, why not check out a fighting game and be drawn into a new world of wonder?