Will the Wallabies feel the need for speed after Eden Park?

Speed kills. It used to be the mantra of an old British television advert, warning drivers about their speeds in urban areas.

For rugby coaches and players, it is speed in the feet and head, or the “top two inches” as Graham Henry used to call it.

The first two trans-Tasman games of this year’s Rugby Championship have proven that abundantly. Speed off the ground and speed-reading of their lineout calls cost the Wallabies dearly in Sydney.

At Eden Park, the All Blacks achieved much the same result without dominating either of the set-pieces.

As expected, the Australian lineout returned to something approaching normal, losing only two of their 12 throws and winning back a couple in return for good measure.

The scrum went even better, with the Wallabies enjoying both the lion’s share of the feed and the penalty rewards on offer from referee Wayne Barnes. Surely this would make all the difference after their issues at the set-piece in Round 1?

No, it made no difference at all.

The number of tries conceded is an unwelcome statistic for defence coach Nathan Grey, after Australia had appeared to get a handle on the problem towards the end of 2017.

One major difference in selection during Australia’s period of peak success in 2017 was in the back-five forwards.

The run of matches at the back end of the 2017 Rugby Championship represented the high watermark of Australia’s form last season.

They drew with South Africa and beat Argentina away from home, then won against New Zealand in the third Bledisloe game.

During this period they were giving up an average of two to three tries per game, and that pattern continued on the end of year tour, at least until Sekope Kepu’s first-half red card against Scotland.

Defensive momentum appeared to resume against Ireland in June after the hiccup at Murrayfield, a series in which the Wallabies conceded a stingy three tries over the three matches.

By the end of that series, young Lukhan Tui had established himself in the key No.6 position after a promising performance in the third Test.

Where Ireland will keep the ball for long periods and attack off their No.9, New Zealand will attack in explosive bursts off second or third receiver from a change of possession.

The requirements for a forward defender are diametrically opposite. The first is an effort of concentration, discipline and power in a short area; the second is a test of the ability to cope with sudden and explosive changes in the speed, width and direction of the game.

The ability to repeat sprints is now a common metric in fluid sports like rugby and soccer. That metric is focused not on a player’s ability to sustain maximum speed over a long distance, but on his capacity to accelerate repeatedly over distances of no more than ten to 30 metres.

Typically, a rugby player will be required to make about 40 such sprints in the course of a game.

It has been calculated that a player may spend no more than five minutes (or 300-500 metres of his seven-kilometre total) sprinting, compared to a more than an hour of walking, jogging or standing still.

But what happens in those five minutes and 400 metres is crucial, particularly when you are playing the Kiwis.

Just as important is the ability to recover from impacts, and ‘reload’ for the next phase of activity. It is the need to repeat sudden changes of pace, or recover from impacts which leads to fatigue – and “fatigue makes cowards of us all” as the great NFL coach Vince Lombardi was fond of saying.

Tui is a fine prospect who may well play for a long time for the Wallabies – but I doubt he will do it at 6.

He is a genuine lineout target, winning three at Eden Park, and he was Australia’s best forward ball-carrier, achieving five dominant collisions in 11 carries and converting three of those into tackle busts.

Defensively, he was attempting to hit targets he could not hope to meet as a blindside. The warning signs were flagged in Sydney.

The Wallabies conceded their first try of the game just before halftime, with Ben Smith skinning Tui in a couple of metres of space to make the critical break. It could be described kindly, as a tight forward’s attempt to make the tackle.

In the 73rd minute, Beauden Barrett’s cross-kick found Waisake Naholo marked by Tui out on the left edge of the field. While Naholo would probably run past every number 6 in the world in those circumstances, you would hope he would not do it quite so easily. It looked like Tui was running through mud on the turn.

Another example occurred around the hour mark, when the ball was turned over in the aftermath of a long Reece Hodge break.

While Tui was defending a big mismatch against Beauden Barrett out wide, his turning circle and inability to accelerate into one of those short, explosive sprints did not get him close enough to matter.

The pattern was repeated during a highly instructive sequence in the match in Auckland, after another change of possession when Ben Smith had reclaimed a high ball.

It is worth examining this sequence in detail. After Smith won the ball back and the turnover ball was moved toward the left sideline, Tui found himself grouped together with six other Australian forwards. 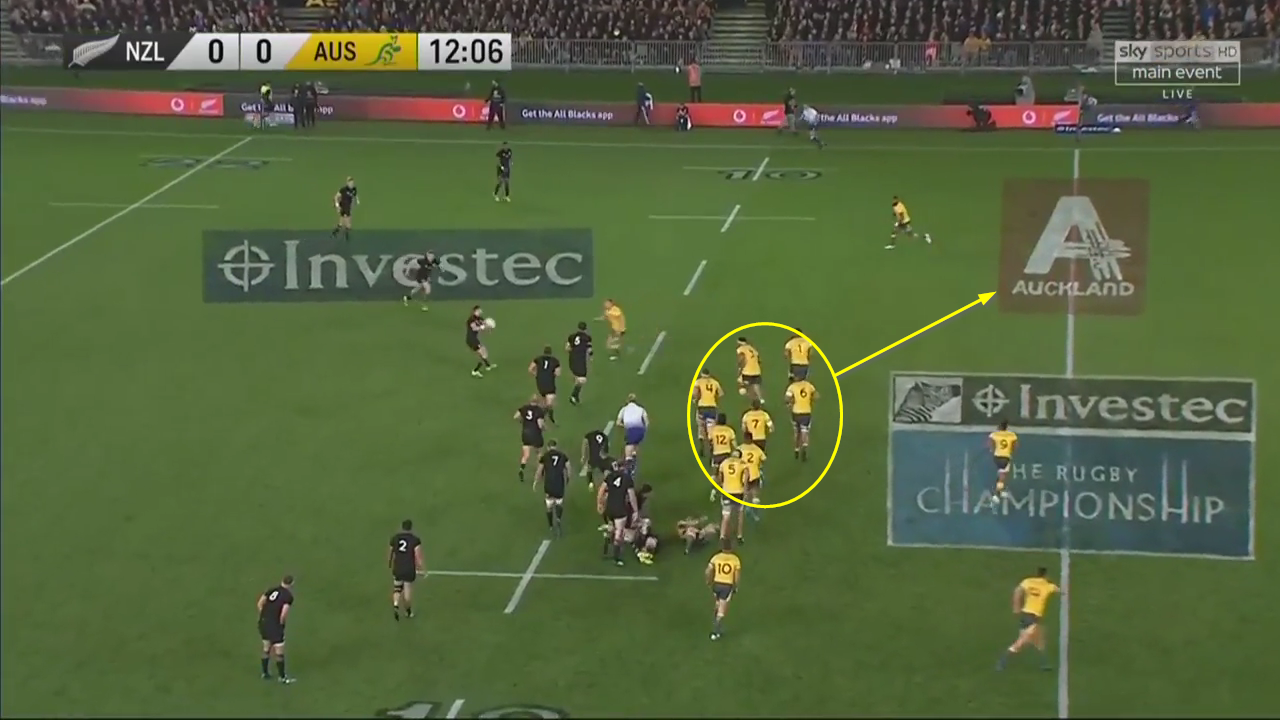 The task of these forwards is to make a sprint, head back towards the goal-line at top speed and snuff out the danger. A few seconds later, the situation looked like this; 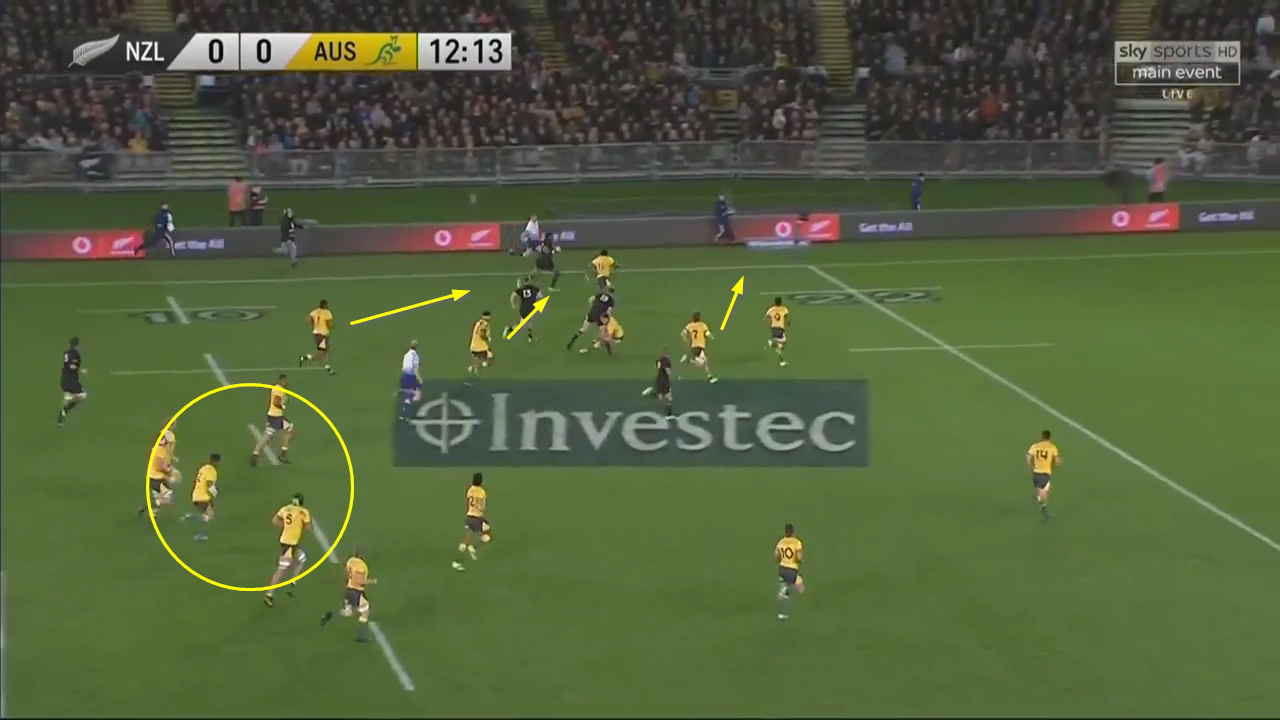 As might be expected, Michael Hooper accelerated and was closest to the ball. What was more surprising was that Allan Alaalatoa and Scott Sio had also put 15 metres between themselves and Tui, who was still running among Tatafu Polota-Nau, Izack Rodda and Adam Coleman.

After Marika Koroibete finally brought Naholo to ground near touch, Tui was a metre or so behind the other defenders on next phase, and he missed Brodie Retallick in the tackle (at 45 seconds on the video). That maintained the All Blacks’ attacking momentum.

Throughout the game, Tui looked uncomfortable when he was asked to defend outside the two spots closest to the breakdown.

Now move play on to the one-minute mark on the video. The Wallabies regrouped and defused the initial threat, and Tui and Reece Hodge combined to make a tackle on Owen Franks. 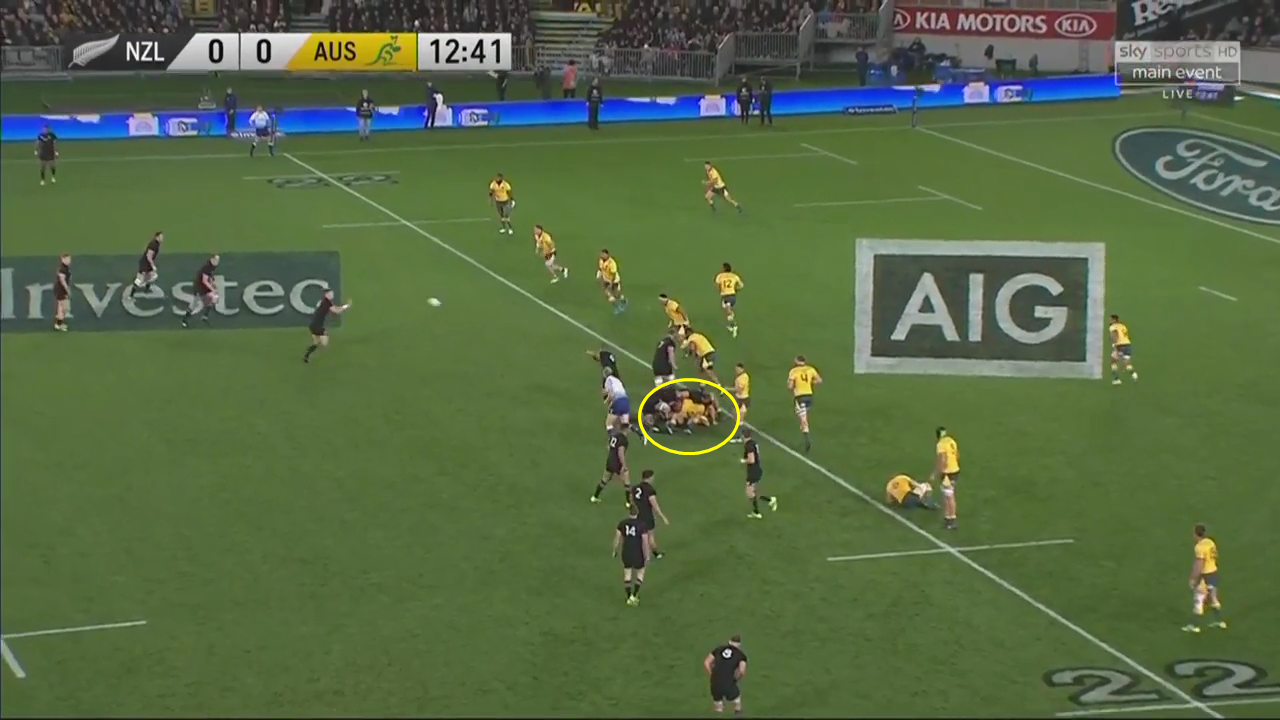 Tui was lying on top of Hodge at the bottom of the ruck. But when play came back to the same spot two phases later (at 1:08 on the reel), he was unable to recover in time to pick up the threat of Barrett and close the space on to Rodda at guard. 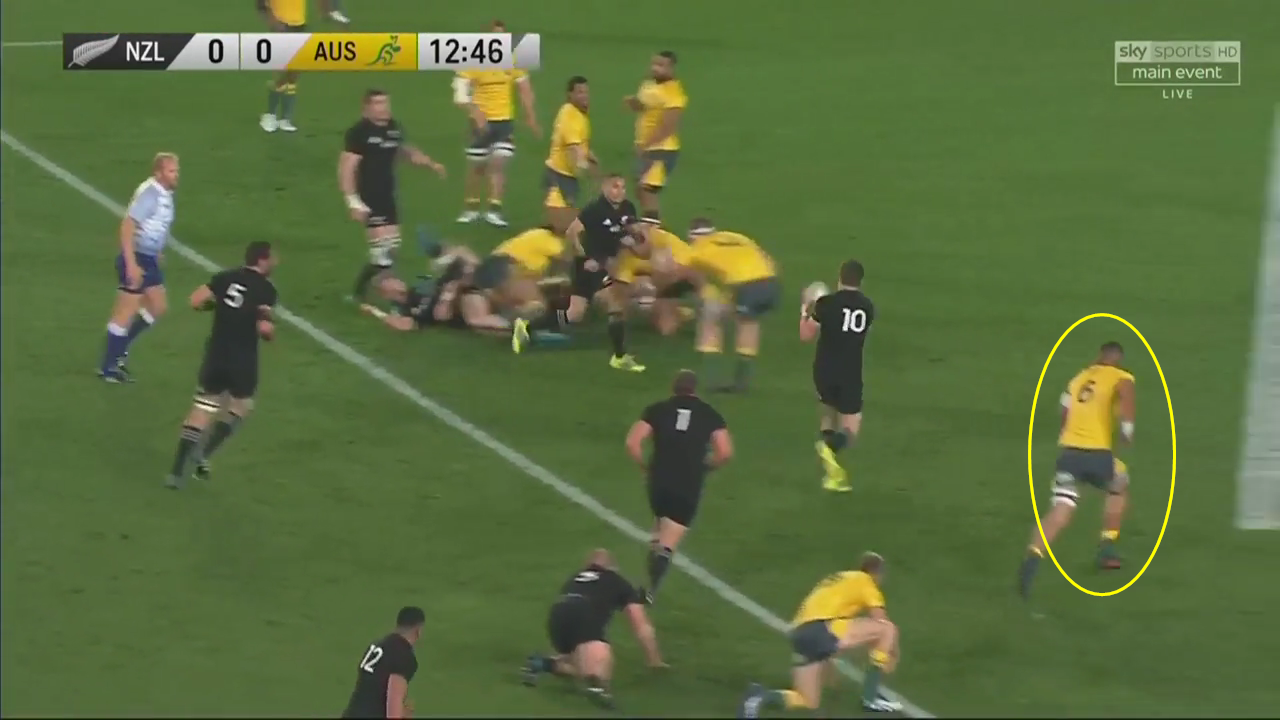 There was a ten-metre gap between the two forwards – and that is far too big in your own red zone. Tui has the sprint and reload responses of a tight forward, not a back-rower, and Barrett scored without a hand being laid upon him.

It is worth running the whole sequence again in isolation.

Another version of the same one-paced response occurred right at the death, with Tui still helping David Pocock up off the ground as TJ Perenara took a tapped penalty and moved the ball away in the other direction. 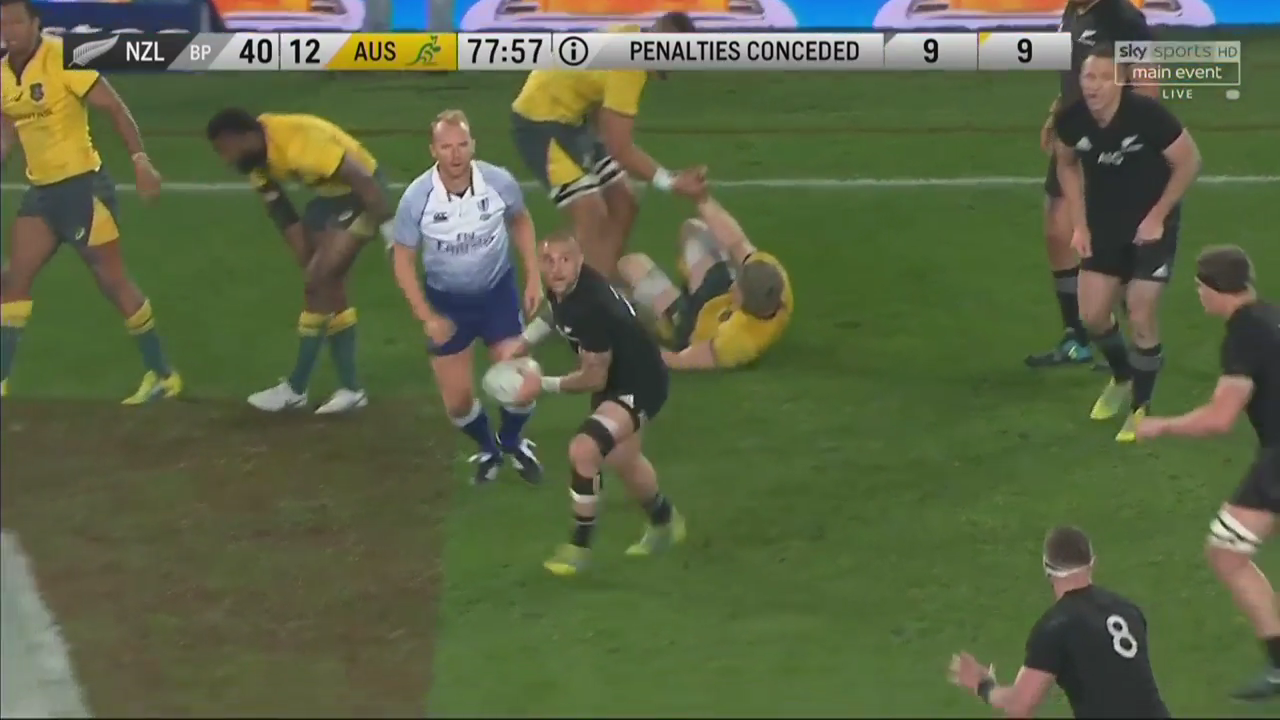 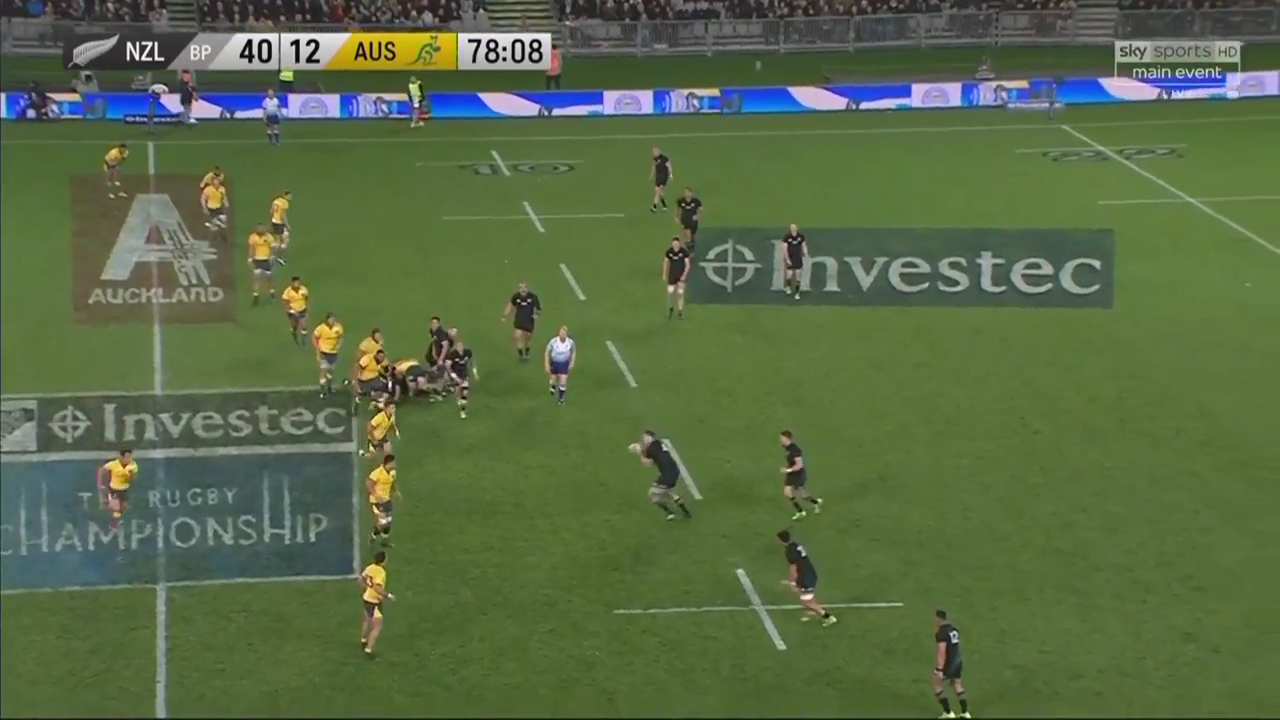 In the second shot, New Zealand already had a five-on-three overlap on their left, with Naholo out of frame and Nick Phipps trying desperately to get up into line. Naholo duly scored a (disallowed) try a couple of phases later.

Summary
The focus on reload times after impacts, and the capacity to initiate and sustain sprints at critical moments when the game changes speed, is becoming sharper with every passing season.

It is certainly an essential part of any formula to beat the All Blacks.

The Wallabies did not impress in this area at Eden Park, and Lukhan Tui’s performance was symptomatic.

If he has an international future with the Wallabies – and I firmly believe that he does – that future must lie either in the second row or as an impact sub.

He has ability at lineout and particularly on the carry, but against opponents who can use the full width of the field and force him to work hard in bursts, he cannot make the defensive recoveries required of a loose forward.

The Ireland series may have lulled the Australian coaching staff into a false sense of security in that respect.

With neither the Springboks nor Pumas able to move the point of attack as wide as the All Blacks, the temptation to keep Tui at 6 will remain for the rest of the Rugby Championship.

I hope the coaches resist it.

Whatever happens, there is a need for speed to plug the holes defensively. With the headsman’s axe already poised and ready to swing, Michael Cheika’s own future as Australian coach may depend on the decision he makes.