If the AFL wants to keep the pre-finals bye, it has to make more of it

The third year of the AFL’s pre-finals bye felt like a real season momentum killer, unlike the two which preceded it. We cannot abide this going forward.

The pre-finals bye is sure to be the early week talking point, given so precious little actual football news is doing the rounds at present. We have moved onto early trade news, with clubs positioning for raids on opposition players and free agents informing their current clubs of their intentions.

That is the reality of football in 2018 and there is no use complaining about it. It’s happening for two reasons: many clubs have made their first list changes prior to players beginning their end-of-season leave, and because there’s no actual football to talk about.

(And before someone points this out to me, yes I am aware Australian rules football is played in competitions that are not the AFL. It’s just not my jam)

Now in its third year, the pre-finals bye has acted as a handbrake on the competition. The first year it was all new and exciting, while the second year it was more a mild inconvenience that hadn’t yet progressed to frustration. And there was more going on too: the AFL Women’s All-Star game filled up the Saturday night slot which this year was completely vacant.

In my day job, some public sector clients talk about this vague concept known as ‘place activation’. It’s a snappy way of saying that once you build something you better do something about getting people to use it. We’re at that point now with the pre-finals bye; the AFL has to do something about filling the 11 days of space between the Sunday of Round 23 and the first final.

The current awards are not enough. There is a decent level of diversity in the league’s current honours structure, but most of them lack any semblance of buzz or excitement. The AFLCA Champion Player of the Year is announced by press release. The All Australian announcement show is a disgrace. The AFLPA MVP gets it mostly right. The Rising Star voting system is a total mess, and is not helped by the fact its major sponsor seems to care more about being able to wine and dine its clients at a lunch than the prestige of the title.

If it were me, I would introduce another set of awards voted on by members of the media, which is how the highest honours are granted in most US sports. Votes are transparent, and the people who make them are genuine in their care to ensure the history of awards are respected. Either that or move the Brownlow Medal ceremony forward – it is, after all, a home-and-away season award.

Still, the awards are not adequate compensation for a football-free weekend. And the EJ Whitten Legends Game is not adequate, period.

Like Channel 9’s The Footy Show, the Legends Game appears a concept that should be put out to pasture. This year’s game was held in Adelaide in front of about 9000 people (according to Austadiums) and had a free-to-air TV audience of 380,000 (around 200,000 less than a typical Friday night game). It was entertaining for reasons that did not relate to the game itself, a sure sign the game has transitioned to the farce stage.

The lack of a Saturday night activity stuck out this year. Cancelling the AFL Women’s All-Star Game was probably the right call given so many players were reaching the pointy end of their respective seasons, but HQ did nothing about filling the gap. This cannot persist next season and beyond.

My suggestion is one I have written extensively on in the past: bring in an NBA-style All-Star Weekend centred on players signed to teams who haven’t made it into the finals series. Have them compete for cash in skills contests, set shot goal kicking, high flying marks; select teams for the All-Star game with a player draft for a bit of extra off season holiday money; get some charities involved if that’s what it takes to get these things off the ground in 2018. 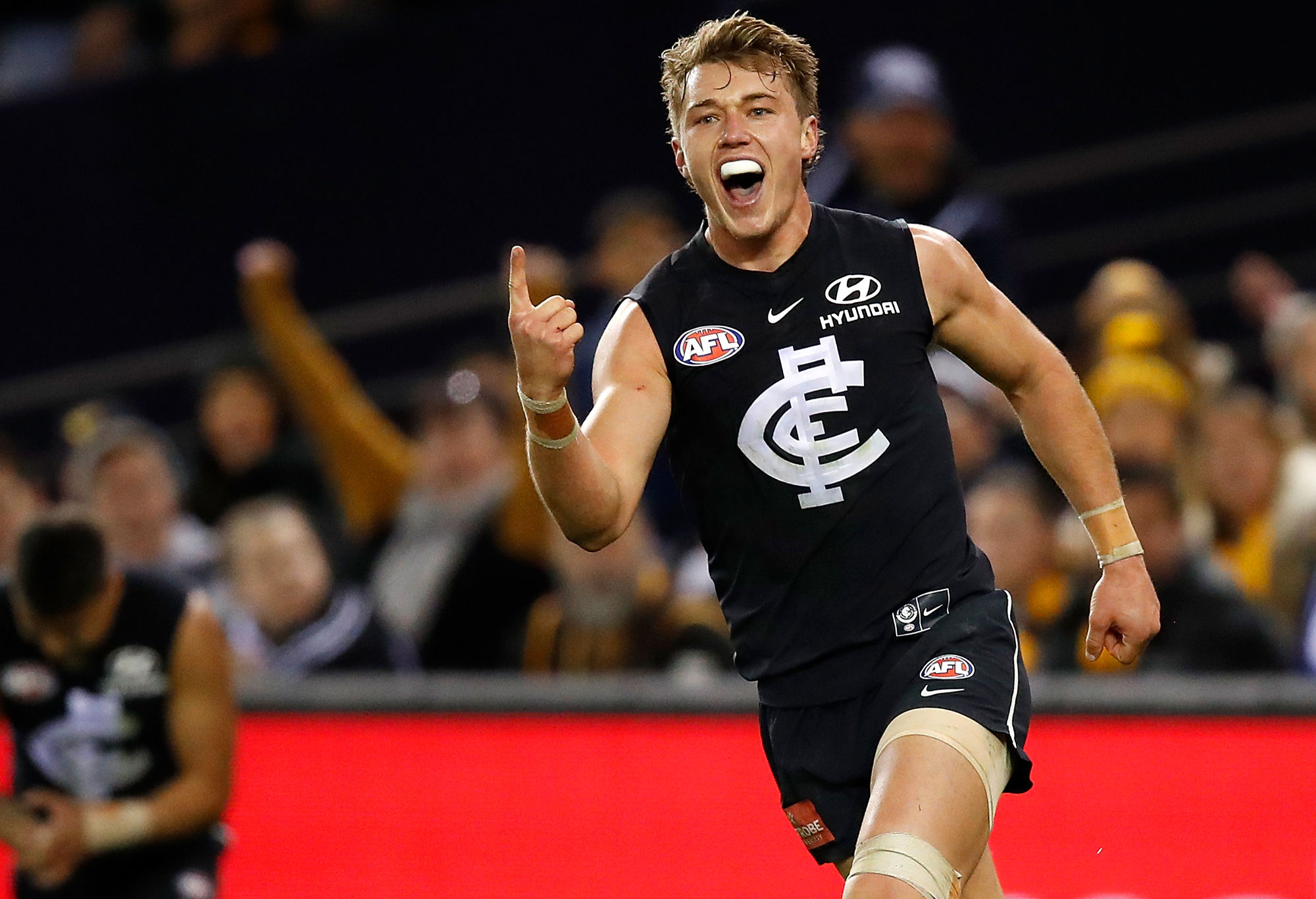 Patrick Cripps would be a shoe-in for any pre-finals All-Star game. (Photo by Adam Trafford/AFL Media/Getty Images)

The League may also consider a prime time under 18s round robin or something similar, to whet everyone’s appetite for the draft. Something. Anything.

The AFL will have to do something, because the pre-finals bye seems here to stay. The League has already confirmed its working assumption is next year’s fixture will have a week off between Round 23 and week one of the finals. So, the place is made, and now it’s time to activate it properly.

Which brings me to the impact of the bye on what ultimately matters: who wins the premiership. There has been a lot of talk about this over the weekend, because there’s nothing else to talk about.

Plenty have claimed it erodes part of the advantage of finishing in the top four, with some of those pointing to the Western Bulldogs’ premiership as proof. These are grand statements indeed to be making on just two years worth of evidence. But even if you were to look at the evidence, the results are mixed.

Of the four qualifying final winners in the pre-finals bye era, two have made it to the grand final and two have not. However, it is worth noting the two who did not were beaten in the first half of the first quarter of their final (Geelong losing to Sydney in 2016) and lost by a goal (GWS losing to the Bulldogs in 2016). No one batted an eyelid when Adelaide and Richmond dispatched the Cats and Giants in last year’s finals series.

This year is unlikely to yield anything material on this front either. The Tigers enter the week of their qualifying final as one of the shortest-priced premiership fancies in living memory. Two teams sitting in the bottom half of the eight (Melbourne and Geelong) hold the second and third best percentages in the competition. The Dees are riding the hottest form streak in the league and are expected to go well this September.

If they win it all, does that mean the pre-finals bye took away too much of the advantage won by Richmond, West Coast, Collingwood and Hawthorn? Or is it because they were the best team in it and they just happened to finish in fifth place? Good luck untangling those Christmas lights.

Fortunately, this talk will fade into the background shortly, because there will be football and all will be right with the world. Let’s hope HQ learns from the mistakes of this year and gives us something worth paying attention to in next year’s pre-finals bye.