Where do Geelong go from here?

So Melbourne are the feelgood story of the AFL right now, and are getting acclaim for the way they dismantled Geelong in the first elimination final.

Truth be told, they should have won by plenty more as their physical pressure and manic approach to the game was something else. But the real story is on the other side of the ledger, where the Cats’ finals record slipped to 3-9 since they won their last flag in 2011.

In those 12 finals, they have won just four first quarters and on four occasions have been more than 30 points down at the first change. In finals, that is a death knell, especially in a sudden death game, of which all four of those were. There are many theories about a team that starts so slowly, on a consistent basis, in big games and coaching is one, but let’s park that one for now.

Geelong’s list is the third-oldest in the AFL in 2018 and the sixth most experienced. That list profile screams of a club that considers themselves in the premiership window, although the Cats have probably not considered themselves outside that window in the last decade.

Some of its oldest players are some of its best, but the list contains more than a few players around who there is a question mark. Either due to injury or lack of performance, the following middle-aged players are no longer deserving of a position on the list: George Horlin-Smith, Lachie Henderson, Aaron Black, Zac Smith, Daniel Menzel and Scott Selwood.

Some of those players have never had a good run of it in terms of their body, but Menzel has seemed checked out for most of the season and the hype far outweighs his performances, especially in big games. Scott Selwood was a solid foot soldier, maybe more but the game has gone well past someone with his limitations although his surname may keep him in a job.

Henderson was never more than a gap-filler and now has become a guy surplus to requirements with the development of Tom Stewart and Mark Blicavs, and the early promise shown by Mark O’Connor.

Move up the age list a little further, and it’s sad to say that Harry Taylor is done; he was a great servant, maybe more than that, but like Henderson, he is no longer worthy of a list spot.

Their ability to grab mature-age recruits has been remarkable – Sam Menegola and Tim Kelly are quality footballers, adding depth to an already stacked midfield. Of the young crew, Brandan Parfitt and Esava Ratugolea demand to be in the first 22 when fit, as do Jack Henry and Jake Kolodjashnij.

In Tom Hawkins they have an old-fashioned full-forward who is peaking at age 29; forget the All-Australian team, which was an absolute shambles – he is elite and as good as any key forward in the game. Joel Selwood and Patrick Dangerfield both turn 30 in the next 20 months; that is an alarming statistic, especially in Selwood’s case as his body has taken an absolute battering.

Dangerfield remains the mouthpiece of the AFL Players Association and is happy to voice his opinion on any subject, but he can’t hide from the fact that his recent finals performances have been, on the whole, sub-par. 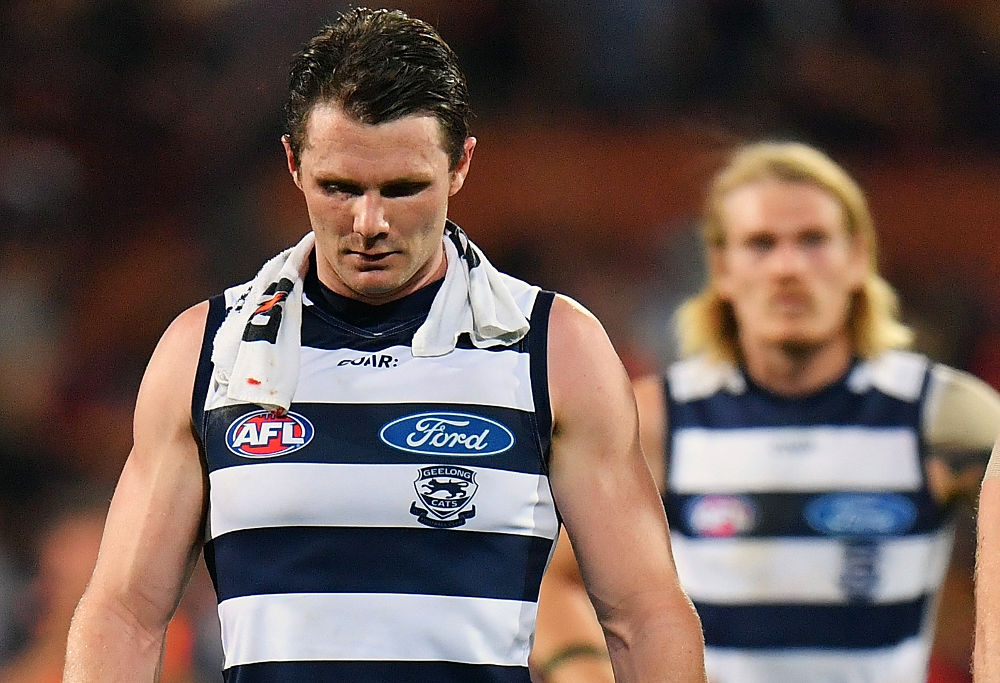 Patrick Dangerfield of the Cats walks from the field. (Photo by Daniel Kalisz/Getty Images)

Now, when I say sub-par it is in the context of what he is – one of the best players of the generation. With that label comes the expectation that you play well when your team needs it. Not saying he has had many poor games, but his impact in finals has been well below what is expected and his field kicking has always been a problem, which becomes magnified in September.

Selwood is a warrior and may actually be underrated as a footballer; to have won three best and fairest awards at such a strong club, and to walk into the 2007 side as a 19-year-old and demand respect immediately is incredible. He has drawn plenty of scrutiny over the years for ducking and trying to milk free kicks, but that’s noise – he is tough, skillful and resilient and it was a shock to see him play so poorly against Melbourne.

His body language and general disgust after the game was a sign of great leadership; it meant the world to him to lose, and you wonder whether he glances around the change-rooms and wonder if it means that much to some of the other players.

The third gun in the midfield might be the best player of our generation and the oldest player on the list. Gary Ablett has given fans the absolute best of footy for well over a decade, and there seems to be plenty ready to pot him.

The way he handled his last season at Gold Coast was questionable at best, grossly unprofessional at worst, but the fact remains that he has set the bar so very high, that anything less than perfection is criticised far too heavily. He has never been a strong tackler, nor paid much respect to opponents when it comes to running and chasing, but quite frankly he has never had to.

The vitriol spewing out of many media mouths this season about him being soft, past it and too slow is rubbish; he has to be the cream on the cake, not the cake itself. The issue with cream is that it has an expiry date, as do footballers…especially when they are 33 years old.

A cursory glance back over the names listed so far tell you one thing – this is a side absolutely stacked with talent and the list profile tells you the club consider themselves well within the premiership window. The fact is, that they are as far from winning a flag as most sides who didn’t even make the eight and while you can only make six to eight list changes a year, limiting their ability to turn over too many players, you can make a change that is far more impactful right now – move on from the coach.

Chris Scott apologists will argue that he is a premiership coach, and that he is. They will also say that sacking the coach is the easy way out, but this list doesn’t need a total overhaul, and only half a dozen list positions can realistically be turned over every season.

To coach the 2011 Geelong team to a flag is in effect having a car on cruise control; there is very little driving skill involved. That side was at the back end of the best five-year period in modern footy history and had as many as half a dozen on-field coaches. That grand final was memorable for a few reasons; Meatloaf managed to butcher every single word that came out of his mouth, and it was the high-point of Scott’s coaching career (obviously) in his first season.

To be sitting here, seven years later, and having the quality of player he has had over the journey, and to have just three finals wins to show for it (with no grand final appearances and three preliminary finals losses by an average of 34 points, including two in which they scored one combined goal) is mediocre at best, and an absolute indictment at worst.

Geelong’s home ground advantage is arguably the best in the league, they have a multitude of quality and yet they finish 2018 in limbo, and as far away from being a flag contender as they have been since 2011. Ablett, Selwood, Dangerfield and Hawkins will all likely be lost to the game in the next three to four years and while the next crop looks strong, the coach hasn’t proven an ability to do anything other than fire off a decent cliché in a press conference. 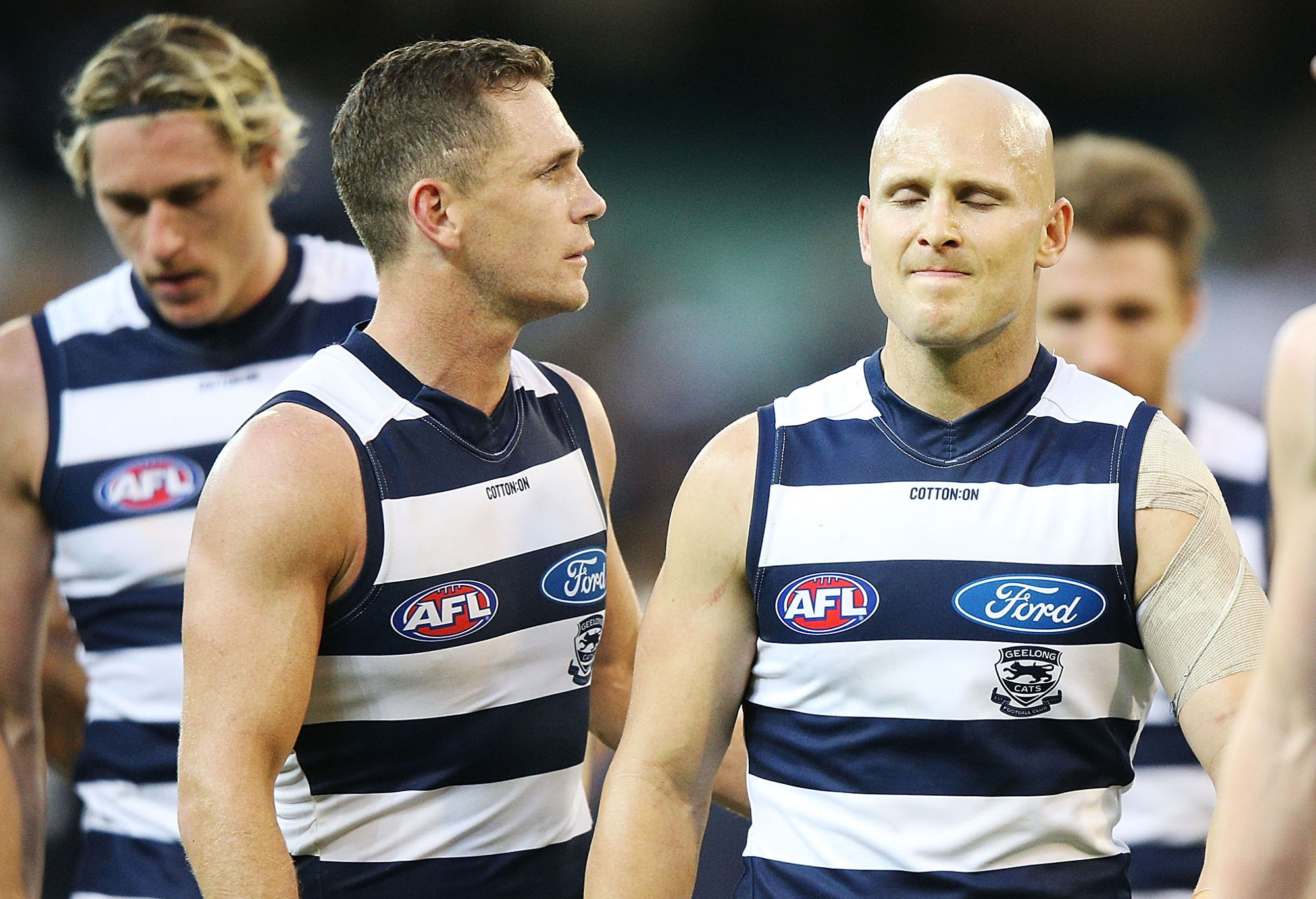 Re-signing Scott until the end of 2022 was one of two things – either blind faith in a coach who led the team to the summit of the mountain once and hasn’t gotten halfway up again since; or acceptance that this side will likely be around the mark as a finals team every year. If it is the former, the club owes their members and fans more.

If it’s the latter, it’s an indictment on a club that, along with Hawthorn, has set the standard for modern excellence and may actually have been ‘the greatest team of all’. As long as Scott remains in charge, Geelong fans can look forward to a whole lot more disappointment. A Great Scott, this is most definitely not.