I don’t know whether it was from elation or from sheer exhaustion. But the tears that flowed so freely down the face of South Africa’s Pieter-Steph du Toit at the end of Saturday’s match in Wellington were a picture worth a thousand words.

They spoke directly from the beating heart of an ancient rugby rivalry which has been passed down from generation to generation, from the likes of Jan Pickard – a notable Springbok second row of the 1950s – to his grandson Francois Louw (or Louis-Francois Pickard Louw, to reveal his true identity); from Piet ‘Spiere’ du Toit to the man in tears at the Cake Tin. That rivalry was alive and well on Saturday evening.

Piet du Toit was the Bokke strongman who played 14 matches in the South Africa front row between 1958 and 1961. He began rugby life as a back-rower, but added mass through a special conditioning regime to earn his nickname ‘Muscles’.

When the legendary Doc Craven saw him as a first-year student at Stellenbosch University, he was in no doubt of his value.

“We have two Springboks here, that prop and his hooker,” he said afterwards. “Those two were Piet du Toit and Abie Malan, and together they went all the way from under-19 to the Springbok team.”

The man who opposed du Toit on his last appearance for South Africa at the Boet Erasmus stadium in Port Elizabeth in August 1961 was Jon White, a no-nonsense forward from the bush around Yeoval and Wellington who had himself converted from second-rower to loosehead prop.

White was a dyed-in-the-wool grazier from the country who was elected to the Australian Rugby Hall of Fame back in 2009, and I had the privilege of spending a couple of hours in his company on the British & Irish Lions tour of Australia in 2001.

He remembered Piet du Toit vividly from their encounters on that 1961 Wallaby tour:

“Piet was a brute, but I was a well-behaved player. I was never sent off. I liked to get to where I wanted to get by good technique rather than by more physical methods.

“I played against him twice in that 1961 series. When I first saw him and his muscles trot out on to the field, I thought ‘I am going to be able to run rings around this bloke’.

“But after a couple of scrums against Piet, I couldn’t run any faster than him. The whole scrum would shake and move sideways when he engaged, and most ended up on the floor. It was bloody hard work.”

Now we live in an era when far more if expected of forwards than set-piece excellence. No more ‘lumberers in among the backs, stuffing it up’, to use Jon White’s words.

If the ghost of ‘Spiere’ was looking down on the exploits of his grandson on Saturday evening, he would have been a proud man. Proud of how much the jersey evidently meant to him, and proud of his distinctively modern performance at number 7.

While the Wallaby back row laboured and lumbered in the painful defeat against the Pumas on the Gold Coast, du Toit put in the understated performance of a lifetime in Wellington.

In defence, he made a colossal 36 tackles out of 39 attempts, more than all of the Australian back row put together. The raw stats look like this:

Du Toit played for every one of the 84 minutes the match lasted, and when the game was on the line he made more tackles in the final quarter (14) than he did in any of the three preceding it.

His monumental effort in defence typified that of forwards around him like Malcolm Marx and Steven Kitshoff. But how did the South African defence concede six tries if the effort was so committed?

The truth is that it was Jekyll and Hyde-esque. Every metre denied to the All Blacks around the ruck was compromised by five or ten given up in the wide channels.

This is the world in which Rassie Erasmus lives as Bokke coach – one in which his left winger, Aphiwe Dyantyi, can score a brace of tries and be outstanding on attack while defending like a swinging door when the other side has the ball.

The early signs on the Springbok left side were alarming:

In this instance, there is no reason for Dyantyi to jam in on Beauden Barrett and leave Ben Smith free on the outside, because the centre inside him (Lukhanyo Am) has already read the play and shifted out on to the All Blacks number 10.

In the 15th minute, New Zealand scored a simple try from a scrum by moving the ball into midfield and coming back to the short-side to find only tight forwards defending the edge:

Dyantyi is defending 25 metres deep as a fullback, leaving poor Kitshoff to handle both Codie Taylor and Ben Smith. The shot of the busted play from behind the posts is even more revealing:

Until he is sure Smith cannot return to the right wing, Dyantyi cannot commit to the opposite side: 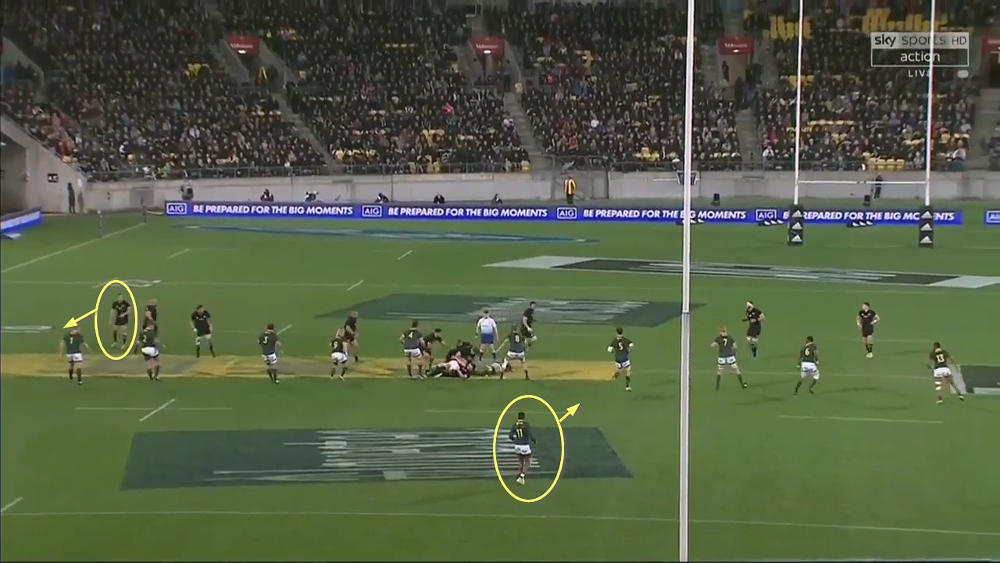 Later in the half, Barrett only just missed his target on the sideline with a cross-kick when Dyantyi was caught defending narrow: 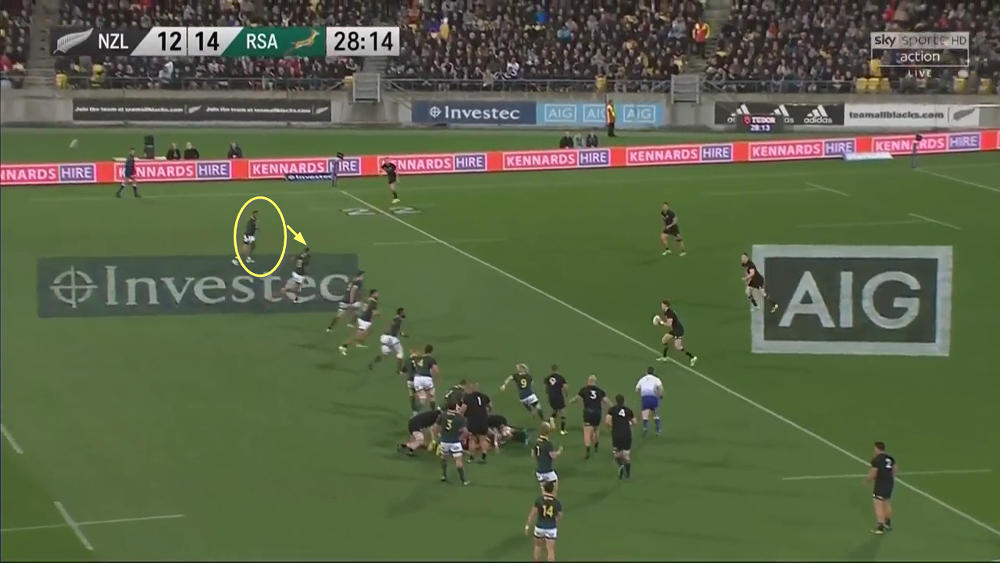 The efforts of Springbok forwards like Du Toit, Marx and Kitshoff were prodigious in trying to cover the gaps that were being created:

This is what recovery in defence really means. After Ben Smith again breaks past Dyantyi on the left, Du Toit has picked himself up off the ground from the previous ruck at least ten metres behind the spot from which Aaron Smith launches the attack.

Compare that with the running of the Wallaby loose forwards in the Pumas’ second try at Robina:

Du Toit runs past everyone to make the tackle on Anton Lienert-Brown at the South African goal-line. Pete Samu gets close enough to Bautista Delguy to influence the play, but he doesn’t make it. The small margins make all the difference.

Towards the end of the half, Du Toit made a pair of tackles on the two Barrett brothers in the backs in the space of eight seconds:

Du Toit was hard and aggressive all night, frequently leading the line up to generate pressure on the All Blacks’ receiver:

Although that might go down as a ‘missed tackle’ in some statistical reports, the Bokke coaching staff would be quite happy that Du Toit’s line-speed has forced Ben Smith back inside and into the teeth of the South African defence.

It was the flanker’s persistence which also had a hand in the Springboks’ key interception try at the beginning of the second half (3:25 on the highlight reel).

Du Toit’s influence on Cheslin Kolbe’s interception is even clearer from the angle behind the posts:

The big Springbok number 7 makes the second effort to move with Anton Lienert-Brown as he circles around Liam Squire, and even though his attempted tackle is another official ‘miss’, it plays a crucial role in delaying the release of the pass, enabling Kolbe to cut into the space between the distributor and receiver and make the interception.

Du Toit was also effective at carrying and offloading the ball on the few occasions that South Africa were able to retain possession:

In the second of the two examples, Du Toit shows himself to be more adept at offloading in contact than any of the Australian back-rowers who were required to play the same role in the wide channels on Saturday evening.

Summary
The effort of the South African forwards in defence at Wellington can only be described as heroic, and no one epitomised that effort better than Pieter-Steph du Toit. They helped covered the deficiencies of their outside backs. Welcome to Rassie’s world. 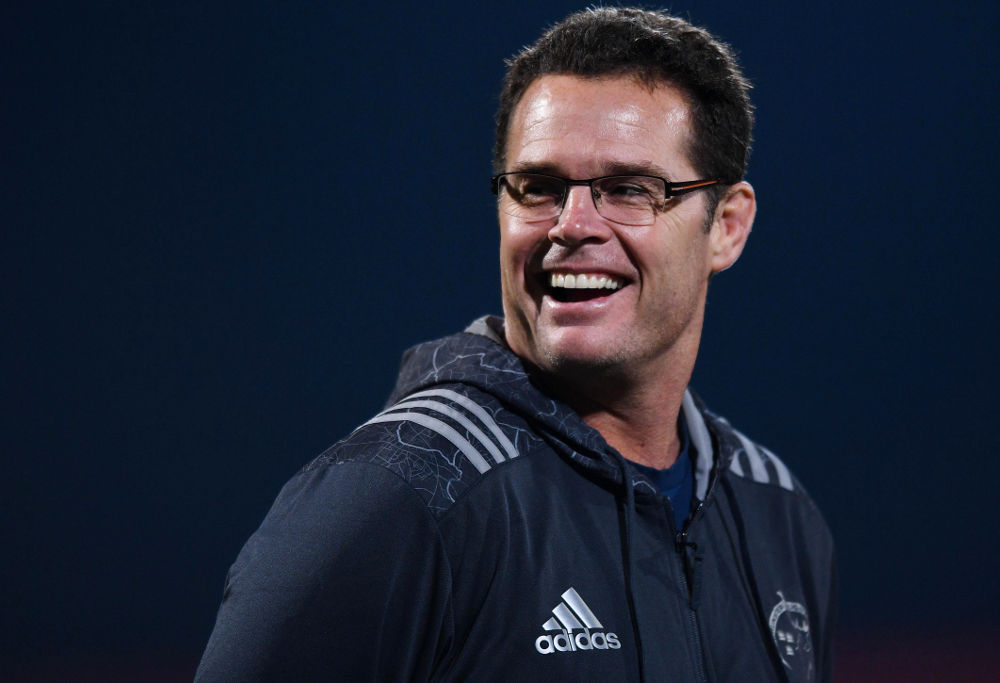 Du Toit is listed at two metres tall and 120 kilos in weight and he has spent a lot of his rugby life in the second row – but he doesn’t behave like a lumberer at all. He can accelerate, he can make sprints, he can generate a second effort or double involvement. He can do it as strongly in the fourth quarter as in the first. He can run and handle effectively with the backs.

Those qualities were critical to South African success at the Cake Tin, but they were lacking in the one-paced Wallaby back-row that played on the Gold Coast. David Pocock was required to bear most of the load himself – but what can you expect, when two of your back-rowers are not deemed good enough to start for their Super Rugby franchises? The step up to Test rugby is a bridge too far.

Du Toit comes from good rugby stock, a family lineage which knows and understands the historical meaning of the rivalry between the All Blacks and the Springboks in its very blood. That showed at the end of the match in his reaction. As a result, the interest of the rugby public in that rivalry has now been rekindled.

Not so long ago, there was a genuine rivalry between Australia and New Zealand, but that evaporated in the first two rounds of the 2018 Rugby Championship.

Now the story is ‘if only’. If only Australia could be consistent, if only they could discover a few more country forwards like Jon White. If only they hadn’t let go the men with big hearts like Scott Fardy and Sean McMahon, who could form part of the back row they really need.

If only. We can only hope that does not become the epitaph on the headstone of Michael Cheika’s career as coach of Australia.