How the Wallabies can rebuild their attack

It was all so simple, and so very deadly back in early 17th century England: you were either a Cavalier or a Roundhead.

You either believed in the cult of personality and the divine right of the king to rule ‘his’ kingdom, or you were a devotee of democracy and a people’s parliament.

There was no middle ground.

You either wore your hair in long, flamboyant ringlets, or you cropped it short and flat and plain.

You were either a devil-may-care pleasure-seeker like Prince Rupert of the Rhine – soldier, artist and pirate of fortune, galloping recklessly into battle with his white hunting poodle ‘Boy’ at his side – or you were Oliver Cromwell, a sober Puritan who rejected perfume and pretension alike.

In 1642, England descended into civil war, and King Charles I was beheaded seven years later. Although the monarchy was subsequently re-established, things were never the same again.

The king became the head of the state in name only, and real political power thereafter rested with parliament.

The civil war never really finished, it just changed shape. It is still there in the agendas of the Tory and Labour parties, honed to a point as exit from the European Union looms.

It is even present in rugby, in the choice of the England number 10 – ‘high living’ Londoner Danny Cipriani on one side, ‘dour’ Northerners George Ford and Owen Farrell on the other. 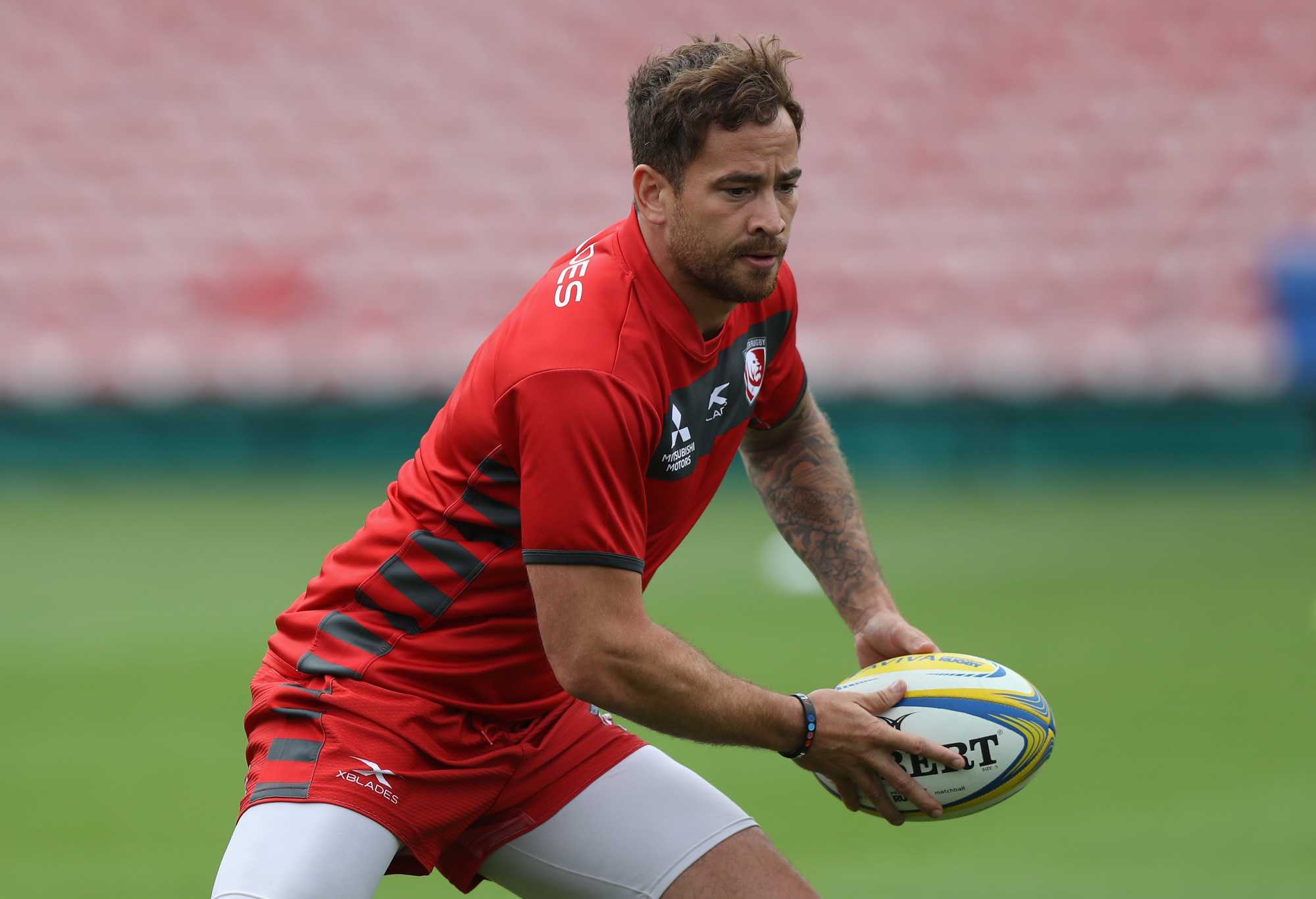 Back in the amateur era, the forwards were the Roundheads who did the bread-and-butter job of winning the ball, then gave it to the Cavaliers in the backs to apply the appropriate flourish and plant the ball over the line.

You could rely on a respectful forward policy of non-interference while the peacocks in the backs strutted their stuff, just as you could depend on a back not to dirty his shorts by getting involved in anything as menial as a ruck. It was part of the unspoken code of conduct in those days.

In the professional era, the division of roles became far more blurred. Gifted roundheads like Neil Jenkins in Wales, Rob Andrew in England, Andrew Mehrtens in New Zealand and Michael Lynagh in Australia began to take over from the Cavaliers in the number 10 position.

Forwards were required to handle and pass the ball more, and exchange some of their roles with the backs. Now it has got to the point where forwards are spread across the field on attack and mixed in with the backline during the great majority of phases.

Occasions when the Cavaliers can be just Cavaliers, and Roundheads simply themselves, are becoming rarer, more vintage, more of a collector’s item. A couple of them occurred during Australia’s last Rugby Championship game, against Argentina on the Gold Coast (at 0:40 and 3:45 on the reel).

In the first instance, forwards like David Pocock and Scott Sio are remembering their age-old inheritance and keeping well out of the way as the backs perform their magic. In the second, the ‘piggies’ are all conveniently clustered together in a maul, leaving the backs to duel with their opposite numbers.

But these moments are not so frequent in 2018.

Recently, the cornerstone of Australian rugby belief – that they will always find a way to score tries and go down fighting – seems to have taken a hit.

Over their seven games thus far in 2018, the Wallabies have only managed to cross the whitewash on 14 occasions, at a meagre average of two tries per game. It is all very unAustralian.

Modern attacking systems require forwards to share the width of the field with backs, and having forwards in these roles who can perform their duties effectively is a key to attacking success. Your roundheads need enough swagger about them to make a difference out wide.

Think Kieran Read with his offloads, or Dane Coles with his passing, or Vaea Fifita with his running power.

Australia failed to reap any reward from these situations in Robina, and it is one of the main reasons why their scoring average is falling away. Their back-rowers (Pocock, Pete Samu and Lukhan Tui in the first half, supplemented by Ned Hanigan in the second) had 13 involvements in the wide channels in the course of the game.

Only five of those interventions had either a positive or neutral impact (three and two respectively), the other eight were negative.

Typically, the Wallabies split one back-rower to either side as an attack develops. 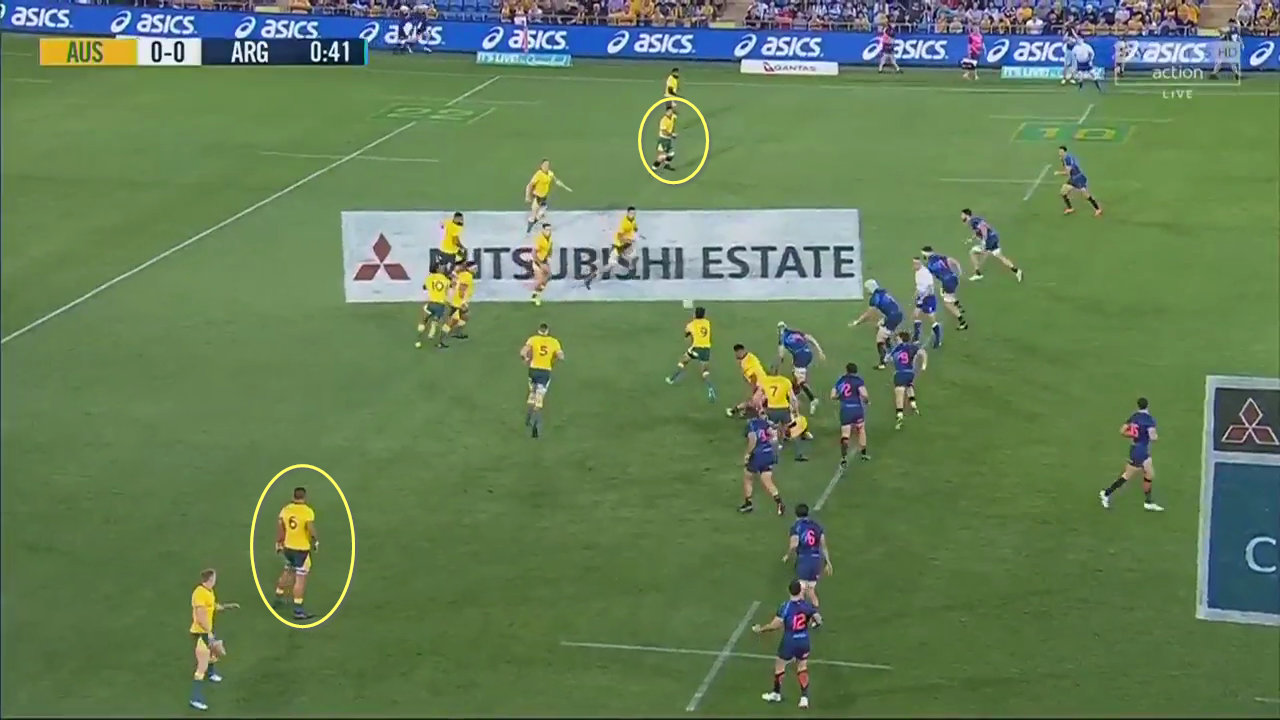 Here, Samu was playing in the far 15-metre corridor, with Tui in the near zone and all of the other six forwards in the middle.

The forwards in this position can help with retention if the ball goes to ground, but primarily they are there to impersonate a back – to keep play fluid via the pass or offload, or run seamlessly with the Cavaliers on the carry or in support.

Of the three starting back-rowers, only Pocock appeared to have learned some of the noble touch on the offload.

Pocock got a nice right-hand offload away out of the side door, but Marika Koroibete was already standing in touch when he received the ball.

Defence is usually thinner on the outside of the field, so the chances of converting an opportunity there are greater. But on three important occasions, the Australian back-rowers chose to take contact instead of keeping the ball alive.

Tui did well to regather the ball in the air initially, but then ploughed ahead rather than slipping the ball to Reece Hodge on his inside shoulder.

In the second half, he had a chance to give Koroibete a run outside him, but again chose to take contact.

The tempo of the attack decreased with every stride Tui took, allowing the Pumas to settle into the comfort of a nice, slow ruck. I’m sure the Wallaby left wing would have enjoyed the opportunity to stretch his legs. 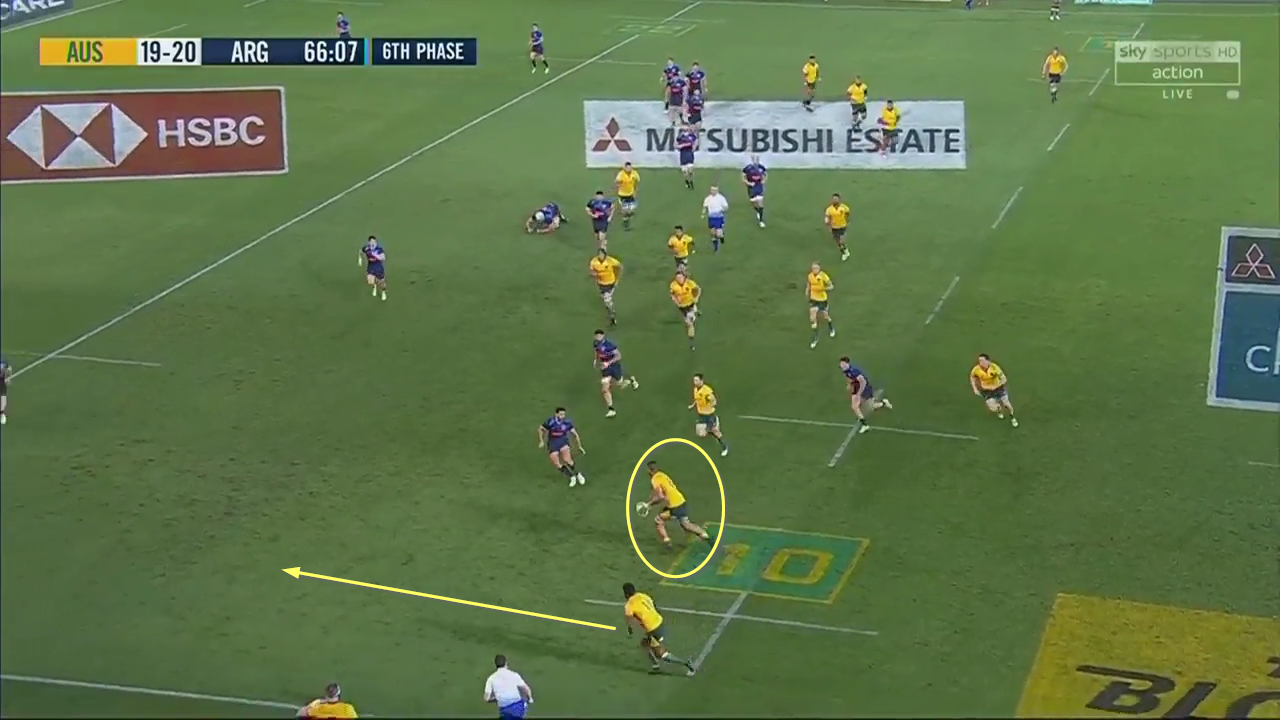 In the first period, Samu had a much clearer opportunity to create a scoring chance for Koroibete.

If Samu passed immediately to Koroibete and stayed alive on his inside shoulder in support, Pumas’ right wing Bautista Delguy had no way back into the game on defence. Instead, Samu keept the ball and Delguy made the tackle.

Unsurprisingly, the lost momentum meant Australia turned the ball over on the very next phase.

With the turbulent events after the game in view, Tui might have been better off sitting the match out. He lacks the instincts and speed to play as a wide forward attacker in any case.

Nick Phipps tried to connect with Israel Folau on the pass and give him a promising shot at Nicolas Sanchez down the sideline, but Tui got in the way and the chance was wasted.

In the outside channels, the ability to support and read the game accurately are also essential and, as a natural tight forward, these are not Tui’s strong suits.

There was some good inter-passing by the Wallabies’ forwards in the middle of the field and a bust by Folau to create space out wide, but at the critical moment, Tui was not available as a support option and had been blocked out by the Argentina cover defender. 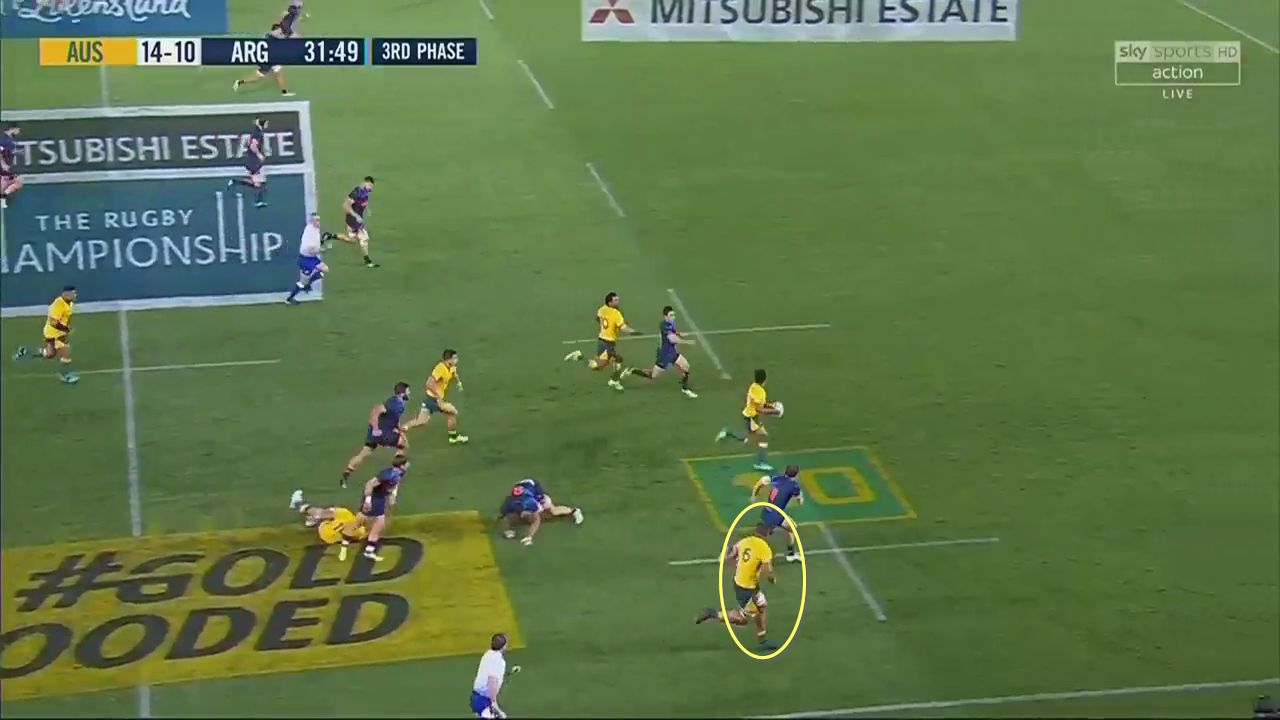 In the following example, Jack Maddocks made a clean break, which left Tui behind on the touchline, so that he did not become part of the cleanout when Maddocks took the tackle.

Incidents like these would make any independent observer question whether the player chosen for a particular role is really suited to it.

Summary
The age-old argument between Cavalier and Roundhead is still in rude health, and not just in England! In professional rugby terms, the opportunities for both to stick to their traditional roles are fewer and further between.

Backs increasingly have to get their shorts dirty, clean out, jackal and even maul with the best of the Roundheads, while forwards will be invited to pass, offload and support with more than a hint of Cavalier swashbuckle.

Their ability to do all of those things effectively is crucial to the success of the attack, especially in the wider channels – and that remains one of New Zealand’s chief advantages over the rest of the rugby world. The All Blacks have forwards like Read and Coles who can make a real difference in that area.

The Wallabies can rebuild their attack by starting from that point. At Robina, they played without the personnel to make that difference, and only David Pocock of the four offered anything like the necessary level of threat needed.

Lukhan Tui is unfortunate to be miscast as a Test back-rower when his undoubted potential will only flourish in the second row.

On the Gold Coast at least, Pete Samu played at the level he currently occupies – as part of their second choice Crusaders’ Super Rugby back-row.

Michael Cheika will welcome back the prospect of a fully fit Michael Hooper for the tour of South Africa and Argentina. Due to Samu’s injury and Tui’s withdrawal, Caleb Timu and Angus Cottrell both have the opportunity to press their more legitimate claims to complement the Hooper-Pocock combination in the back row.

By a roundabout means, it may just be the bit of good fortune Michael Cheika so urgently needs to rebuild his new-model army.