Despite a couple of ruckmen this year being in the running for the Brownlow Medal, yet another count has been dominated by midfielders. When you’re doing your form for next year, pick a midfielder and perhaps look for one who has recently switched clubs. For these are the Brownlow trends that continue to emerge.

It’s hard to write in a questioning way about the ‘modern’ Brownlow without appearing to diminish the worth of the latest winner. So, let’s deal with that first.

Tom Mitchell’s footy this year made him as worthy a recipient of the game’s highest individual award as could have emerged from the 2018 season. He’s been consistent, committed, creative and prolific. Among the year’s outstanding midfield crop, he was the pick. Well done him.

Mitchell had one major slice of luck in late-April when the Match Review Officer assessed his leaping forearm into Todd Goldstein’s head as ‘misconduct’. Misconduct is the modern catch-all for when the MRO, or prior to this season the MRP, knows a player stands condemned by the criteria but doesn’t want to rub him out. Misconduct brings only a fine, not a suspension.

But back to the Midfielders’ Medal. Those on the diversity bandwagon had been speculating that this could just be the year when the stat-accumulator’s stranglehold might finally be broken.

Max Gawn and Brodie Grundy had superb seasons in the ruck and both are highly conspicuous on-field figures. Aside from the footy, Gawn’s uniqueness was such as to have him heavily promoted by the game’s commercial machine. He was now in everyone’s eyeline. Grundy’s star rose as the season wore on and he, too, was hard to miss. 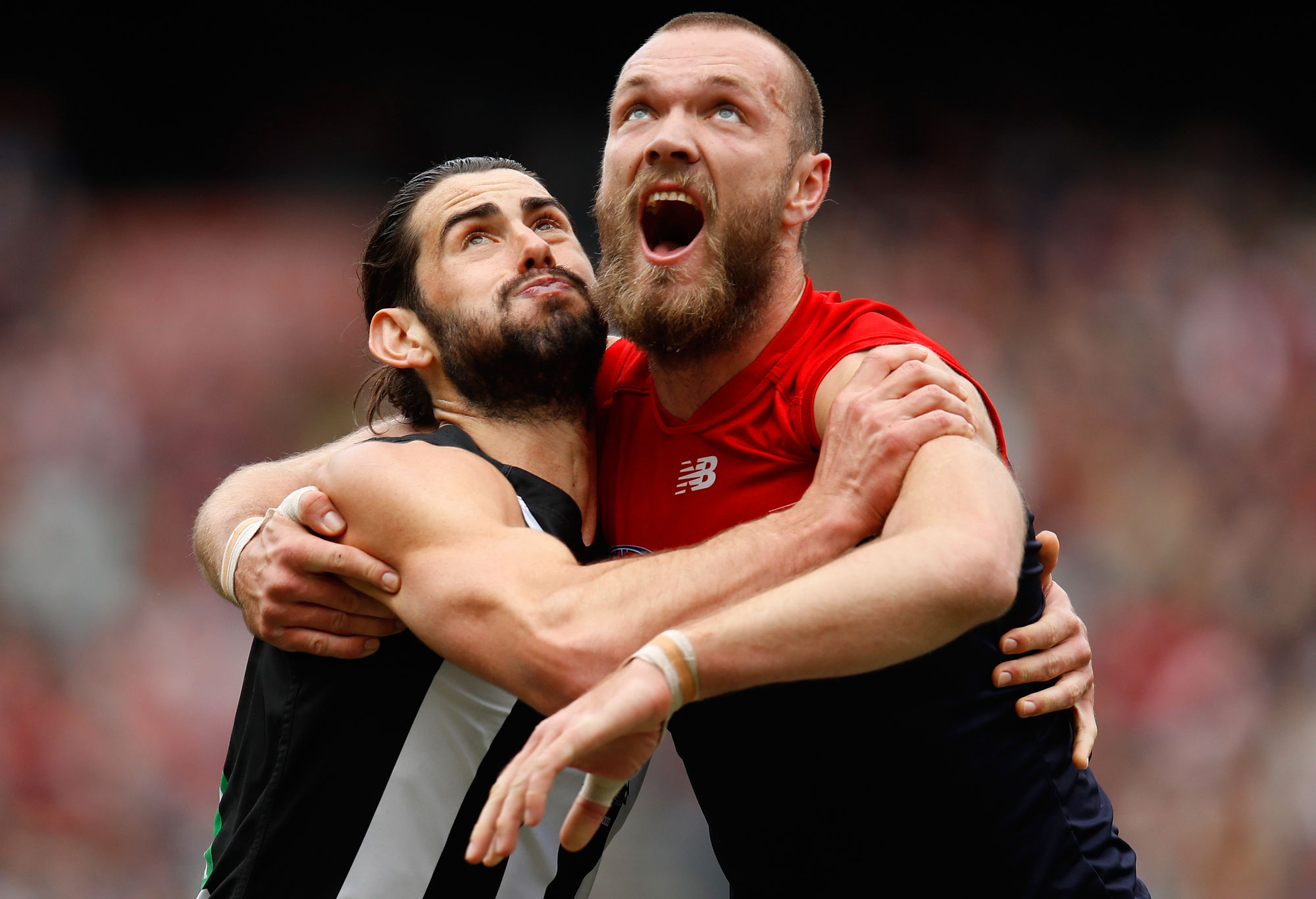 Should a ruckman have claimed Charlie this year? (Photo by Michael Willson/AFL Media/Getty Images)

So, what became of the pair of giants on the night?

Well, it was about as good as the Friends of the Behemoths Society could’ve hoped: Big Maxie eight votes behind the winner in a tie for fourth and Grundy eleven off the pace in equal tenth.

Good recognition of fine seasons, but no cigar. Not even a little cigarillo.

So, if not the ruckmen, what of the stars at either end of the ground?

Well, down the back, the man lately spoken of as the GOAT among key defenders, Alex Rance, failed to trouble the scorer. Brownlow-wise, he currently remains in a tie with his predecessor as GOAT, Matthew Scarlett, on 31 career votes. To be fair to Rance, he’s played only 199 games compared to Scarlett’s final tally of 284.

Take out their finals and that’s about eight and a half seasons for Rance to better Tom Mitchell’s 31 votes, and a dozen seasons for Scarlett to do so. Perhaps there’s a case for defenders being allowed to back-end their entire career votes into one season to give them a chance!

Three others among this year’s All-Australian back six – Shannon Hurn, Jeremy McGovern, and Tom Stewart – polled 16 votes between them.

As for the front-half glamour boys, the ever-conspicuous ‘Buddy’ Franklin – with 16 votes of his own – was the only one to make it halfway to the tally of the ultimate winner. Coleman medallist and All-Australian full forward, Jack Riewoldt, polled ten votes.

Of course, nothing can be done about this. It’s all about the way the modern game is played, and it is played as a game of possession. A midfielders’ game.

The umpires must allocate votes as they see fit and, like most who do likewise in the various media awards, they find it well-nigh impossible to avoid those who have the ball in their hands most frequently.

If a participant in the heat of the action is using the Sherrin thirty or more times per game, the chances are he’ll get a vote or two. Or three.

The pity of it is that it reduces the number of starters with a genuine winning chance.

The other modern trend to emerge from this year’s outcome is that of the club-hopping Brownlow winner. Once upon a time, a player’s footy club was like his religion or his beer. Very few ever switched.

Into the 1970s, though, Ian Stewart and Graeme Teasdale won Brownlow Medals playing at a second club. Others, like Len Thompson and Gary Dempsey won the award playing for their original team but later switched.

Into the 1980s, the trickle became a flow: Bernie Quinlan, Barry Round, Peter Moore, Greg Williams, and Gerard Healy all won Brownlow medals as second-club players. Brian Wilson won his at his third club.

Then, for whatever reason, through another twenty years, that trend largely dried up. But lately it’s been re-lubricated: four of the past ten recipients having won at a club other than where they started their careers.

It’s a trend that mightn’t be as familiar as the one towards midfield domination of the medal. Like the latter, though, I suspect we’re going to see plenty more of it.