To beat the unbackable premiership favourite, it turned out that all you needed to do was play a perfect game of football.

In the end, perfection for the whole game wasn’t even necessary. The Pies touched God for 50 minutes and that was enough.

They blitzed Richmond in the first half and then cleverly let time drip away – beating them to a pulp then taunting the dazed boxer by skirting around the ring, always out of reach, never really in danger.

About that blitz. As a coach you would never plan for everything going right. You wonder, then, what went through Nathan Buckley’s mind as he watched the score build and build, until suddenly it found itself at 64-11 – some absurd, magnificent dream that he couldn’t wake up from because it was real.

Collingwood’s pressure made the expanses of the MCG seem claustrophobic. With ball in hand they had a composure and polish unseen all year. It was infectious – Chris Mayne was out there doing Scott Pendlebury moves.

They rattled Richmond in the first act. The Tigers were spooked and they never entirely regained their composure, or themselves. They were jumping at shadows, turning to run away from Magpies who weren’t there, handballing before they’d properly gripped the ball, blasting kicks that needed to be carefully considered. 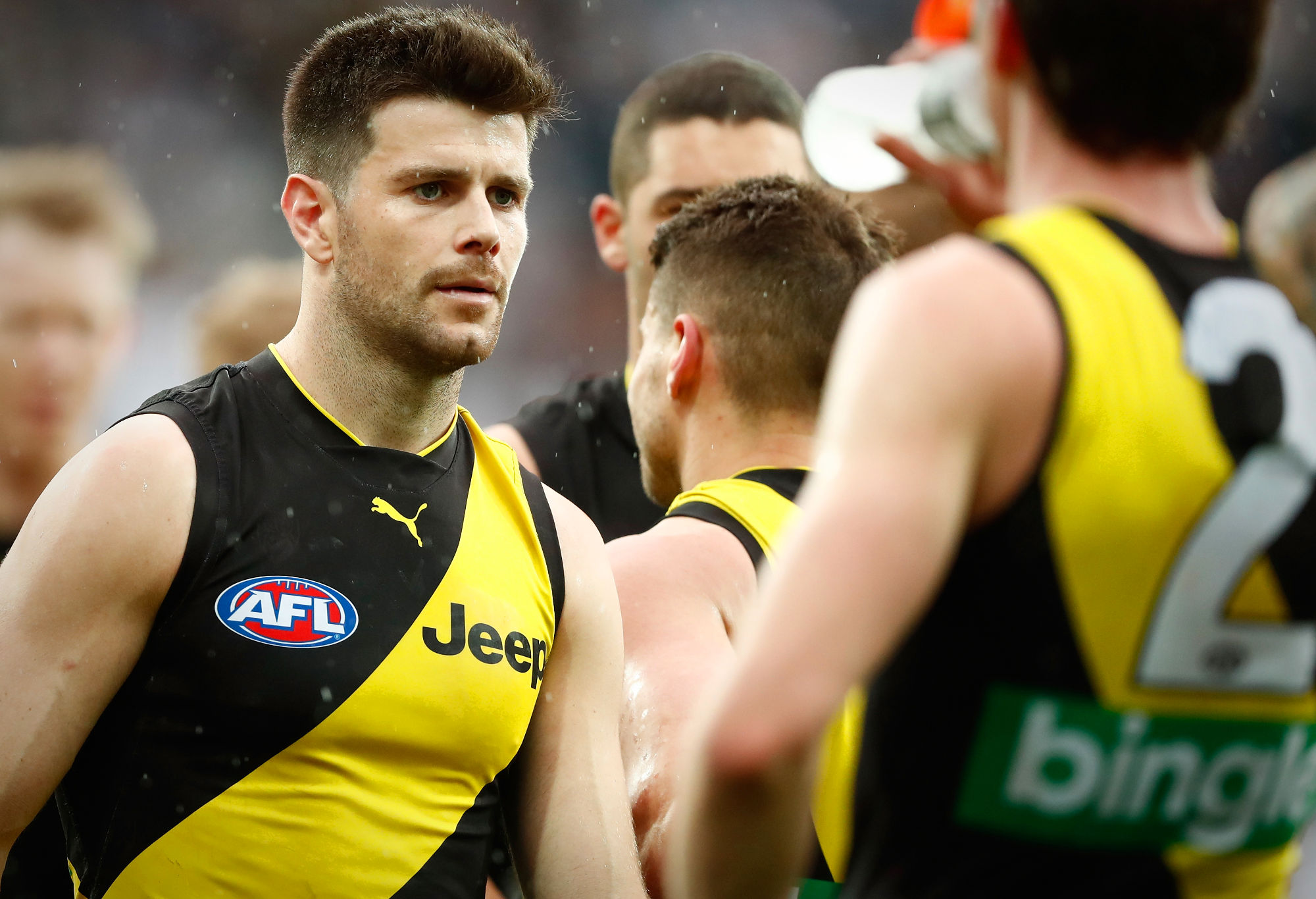 Trent Cotchin of the Tigers looks dejected after a loss. (Photo by Adam Trafford/AFL Media/Getty Images)

There was no escape. The pressure around the ball didn’t relent and whenever the Tigers won possession they had nowhere to go. In the fine details, what was most remarkable about the game was how perfectly the Pies spread their bodies around the ground.

They always had men in the right places. They never let Richmond break free, always outnumbering them in defence, always having Steele Sidebottom and Tom Phillips as outlets on the wings, always finding space to lead inside forward 50. They beat the Tigers because they were everywhere and the Tigers were not.

All year, what has made Collingwood most special is the way they spread with the ball. When they win the ball their players explode in different directions with pace, conviction and a plan. They have a wealth of options going forward, which has mitigated the team’s biggest issue – using the ball by foot.

It’s a lot easier to hit a target if you have most of your forward 50 as margin for error.

Against the Tigers that spread was devastating but so was the spread without the ball. This Richmond team has been magnificent, a 12-month masterpiece that had its crowning achievement at the end of month one, and after watching so much of them you develop certain viewing tendencies, certain expectations of how you expect each play to unfold based on how it began.

On Friday night, time and time again Richmond would break from the contest off half-back or on the wing and your mind would tell you that they were seconds away from booming a kick inside 50 to a running player about to waltz into an open goal. But it didn’t happen.

Over and over again it didn’t happen. The play just stopped. It halted on the wing. The player didn’t play on, he paused, surveyed, then trotted back harmlessly. Eventually, it became clear that this wasn’t going to change – that Richmond weren’t going to suddenly re-emerge as Richmond. 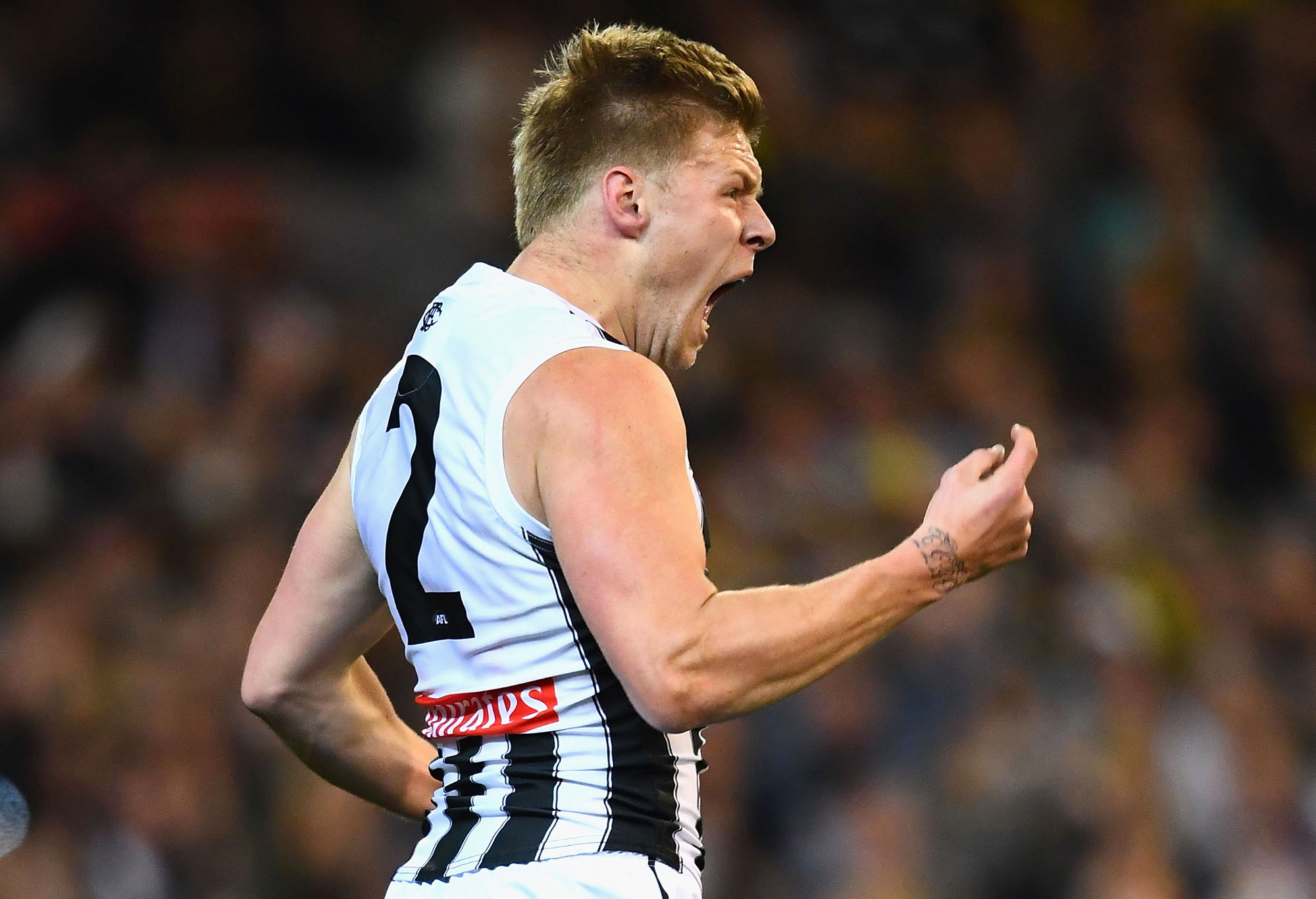 For a second, it looked like they might when they cut the lead back to 21. But even then, the Pies never looked uncomfortable. It felt like they were in control. The Tigers were drowning and their mini-surge was only a desperate reflex – they never looked like actually making it back to shore.

What does Friday night mean for Saturday afternoon? Who knows – who knows anything anymore. We now have The Mason Cox Game and it was a preliminary final.