A million-dollar man flopped and a champion of the game left ANZ Stadium disappointed as the Melbourne Storm collapsed to a 21-6 defeat at the hands of the Sydney Roosters. These are my player ratings for Craig Bellamy’s men from Sunday night’s decider.

1. Billy Slater – 5.5/10
Slater was safe as always at the back. Deserved a better send-off but was given limited opportunities to spark anything in attack playing behind a meek forward pack. Looked more likely in the second half when he was trailing through the middle of the park searching for offloads. Should really be deducting points for that dive after Keary’s field-goal attempt.

2. Suliasi Vunivalu – 4
Was solid enough, but the Melbourne outside backs didn’t provide nearly as much impact bringing the ball back as that of their Roosters’ counterparts. Came up with an error that gifted the tri-colours field position to kick the late field goal.

3. Will Chambers – 3.5
Well, the 190-game representative centre was absolutely dominated by his opposite Latrell Mitchell. Came up with a poor attempt when Mitchell went straight over the top of him for a try in the first half.

4. Curtis Scott – 5.5
Alongside Slater, he was the most threatening of Melbourne’s outside backs but was still unable to cross the line. Ran for 142 metres and busted four tackles.

5. Josh Addo-Carr – 5
A mixed bag from the speedster. Raced away for Melbourne’s only try of the night but came up with a poor error in the lead up to the Mitchell try.

6. Cameron Munster – 3
Reports are that Munster will be re-signed by Melbourne for over $1 million a year. Well, if that’s the case, they’ll be hoping he steps up if the Storm are to make it to the decider next year. Offered Croft very little support in attack, largely went missing and was sin-binned twice. A night to forget. 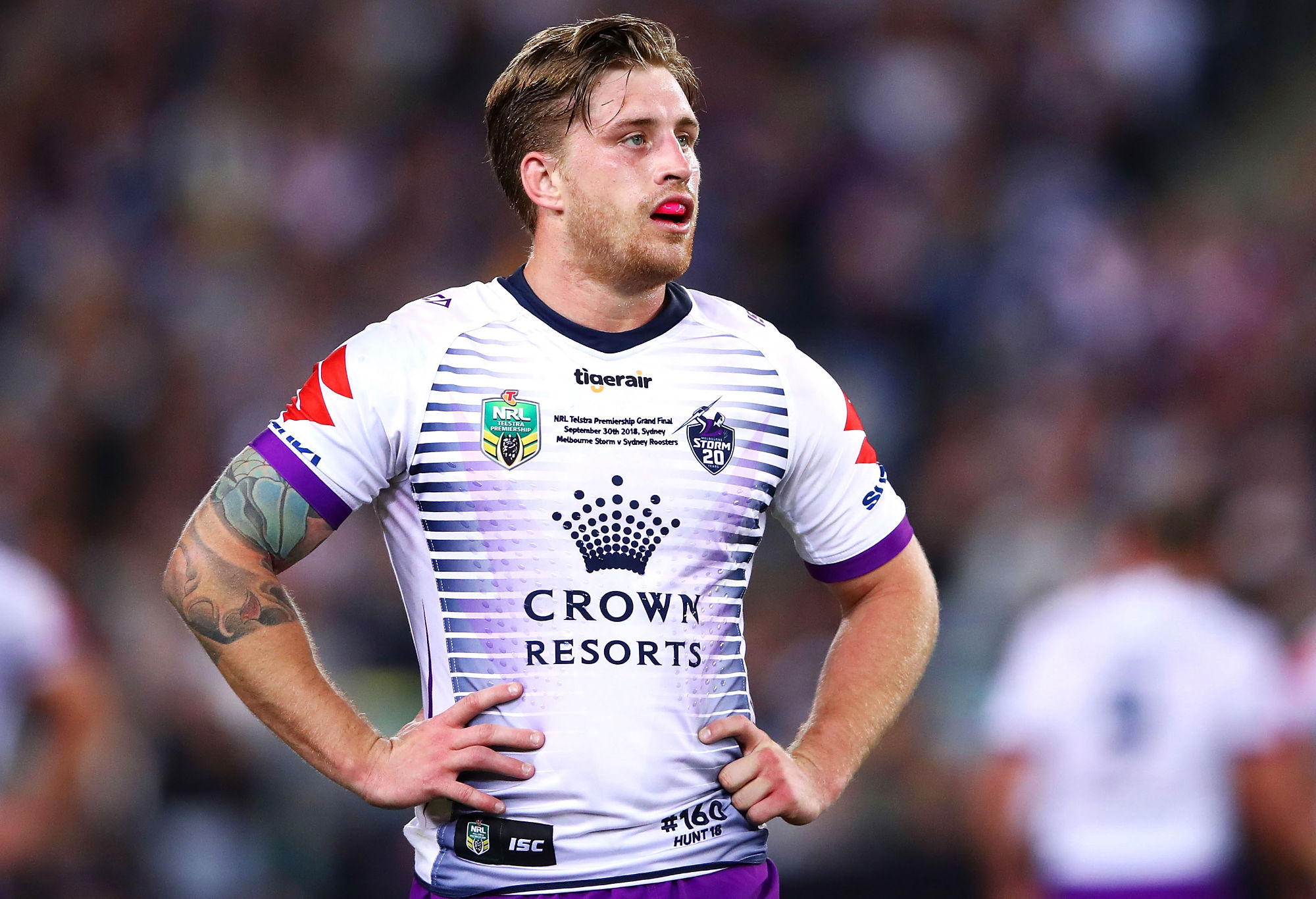 7. Brodie Croft – 5
Croft gave it his all, tasked with most of the kicking duties. His only real blemish in attack was a poor pass to Chambers. Did his best but didn’t offer much in attack. Wasn’t helped by an absent Munster.

8. Jesse Bromwich – 5
A solid effort. Ran for over 70 metres from 41 minutes. Dependable in defence with 29 tackles. Was outgunned by Sydney front rowers Jared Waerea-Hargreaves and Siosiua Taukeiaho.

9. Cameron Smith – 7
Wasn’t given much of a chance to scheme in attack. Was impressive in defence, shoring up Melbourne’s middle with 53 tackles and just one missed.

10. Tim Glasby – 3
Only played for 32 minutes and ran for 18 metres, but was playing primarily during the period where the Roosters were dominating. Managed 23 tackles which was a fair effort.

11. Felise Kaufusi – 5.5
Wasn’t the same threat on the edge and came up with two errors. Like many of the Melbourne forwards, Kaufusi was forced to deal with an increased work rate, making 43 tackles and missing just two.

12. Joe Stimson – 5.5
Similar to Kaufusi, Stimson was solid in defence with 42 tackles but offered very little in terms of breaking through the line. In fact, none of Melbourne’s forwards cracked the century in running metres. Hit hard and was tireless without the ball in hand but Melbourne just needed more variety from their pack. 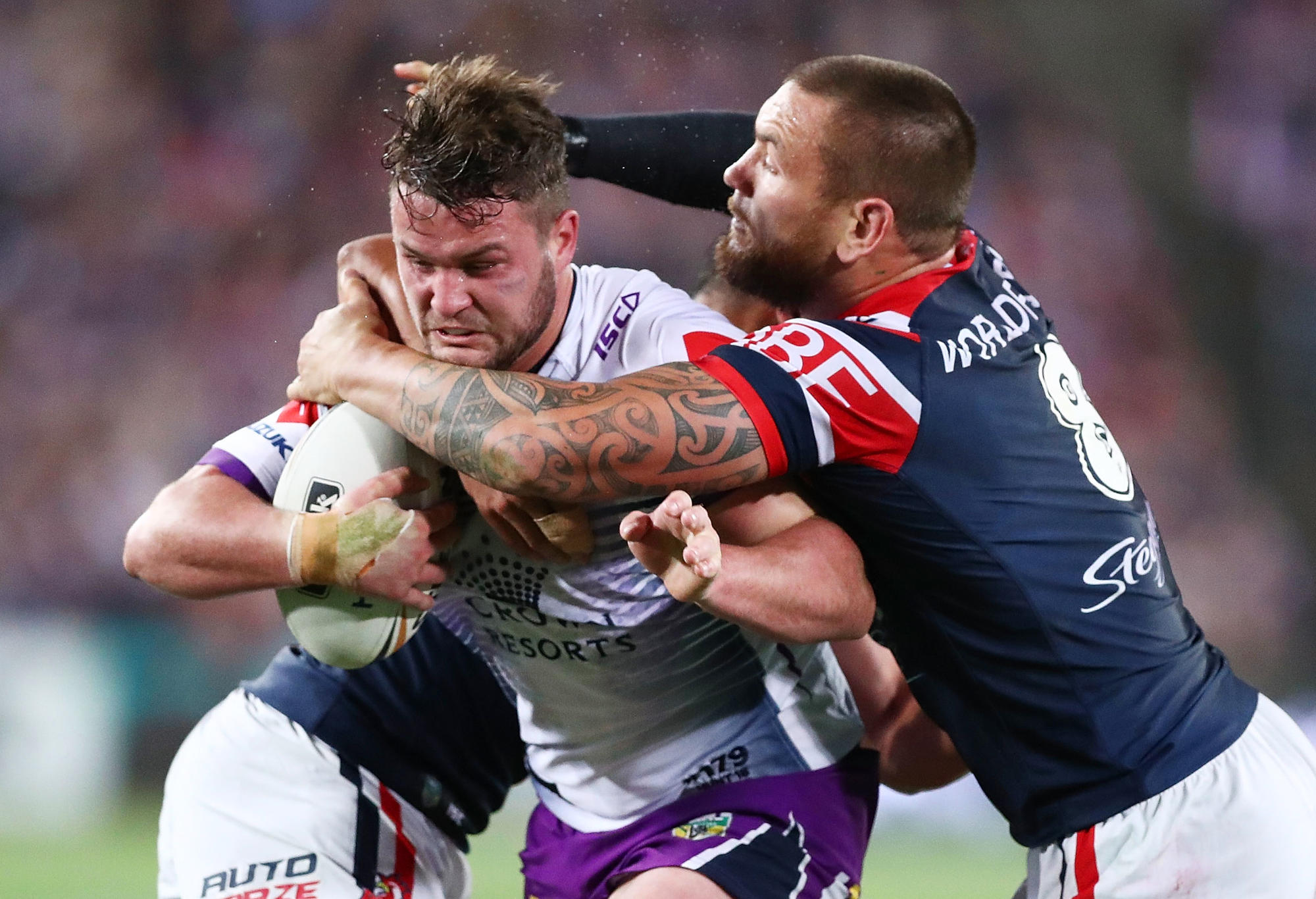 13. Dale Finucane – 7
One of Melbourne’s better forwards. Ran for 99 metres and made 51 tackles. Finucane confirmed his role as the Storm’s most hard-working middle man and should be commended for a determined effort.

14. Kenneath Bromwich – 6
Was threatening in the late stages of the first half and finished up with 90 running metres from 45 minutes on the field. Along with Asofa-Solomona, the 27-year old provided Melbourne with spark off the bench and outplayed the starting forwards when it came to impact.

15. Christian Welch – 4
Just 22 minutes on the field and ran for 33 metres while making 18 tackles. Didn’t do anything too special. Was solid in time he was on but in grand finals, solid is just not good enough in the end.

16. Brandon Smith – 4
Made a couple of slicing runs in the second half and ran for 48 metres from just 16 minutes of play but wasn’t give enough time to make a difference to the result.

17. Nelson Asofa-Solomona – 5
It’s unbelievable that Asofa-Solomona only played for 35 minutes. He was Melbourne’s most explosive player when he was on the park, managing 68 running metres and busting three tackles. Came up with a clean drop in the 30th minute and knocked over Cooper Cronk to give away a penalty for an obstruction but still loomed as Melbourne’s only chance of breaking the game open.