Guerrilla, not gorilla, warfare: Fired tennis analyst who nearly died to have his day in court

“I have nothing to lose, because I lost everything.”

Those are the words of retired pro tennis player turned broadcaster, Doug Adler.

For the best part of 60 years, the American had been dealt a good hand, achieving successful careers both on and off the court.

But in a matter of seconds, his life was torn apart.

Adler was sacked from ESPN, branded a racist, his reputation was destroyed and he went onto suffer a heart attack, as a result of the stress and mental anguish from the fallout of this episode.

And all of this because of a simple ‘misunderstanding’.

This ‘misunderstanding’ took place when Adler was commentating on Venus Williams’ second-round match against Stefanie Voegele at the 2017 Australian Open.

Venus was dominating her Swiss opponent and during Adler’s analysis, he said this.

“Venus is all over her. And you’ll see Venus move in and put the guerrilla effect on, charging.”

Guerrilla warfare, a war fought by small groups of irregular soldiers against typically larger regular forces, has been used for well over 1,000 years.

Guerrilla tennis is a term that has been used in the sport for decades.

In 1995, all-time greats Pete Sampras and Andre Agassi had starred in one of Nike’s most famous TV adverts, where they closed off a section of New York to set up a court, labelled ‘Guerrilla Tennis’.

This is where you utilise an ultra-aggressive strategy, where you rush to the net to make it more difficult for the opponent.

But, in commentary, that distinction was lost on some, including prominent tennis journalist Ben Rothenberg, who, along with the Twitter angry mob, believed Adler had likened Venus to a ‘gorilla’.

Surprisingly, the New York Times contributor had not heard of the term.

In the ensuing uproar over social media, Adler, who was then taken off ESPN’s commentary team for the tournament, was later told by his superiors to apologise on air, so that he could keep his job.

Despite doing just that, ESPN fired him the next day and, ultimately, condemned him as a racist.

Instead of supporting a man who had worked for them for a decade, they acted as judge, jury and executioner – something Alder says would not have happened if it was John McEnroe or Martina Navratilova.

Venus did not come to his aid either. “I pay attention and address situations that are noteworthy,” she said. 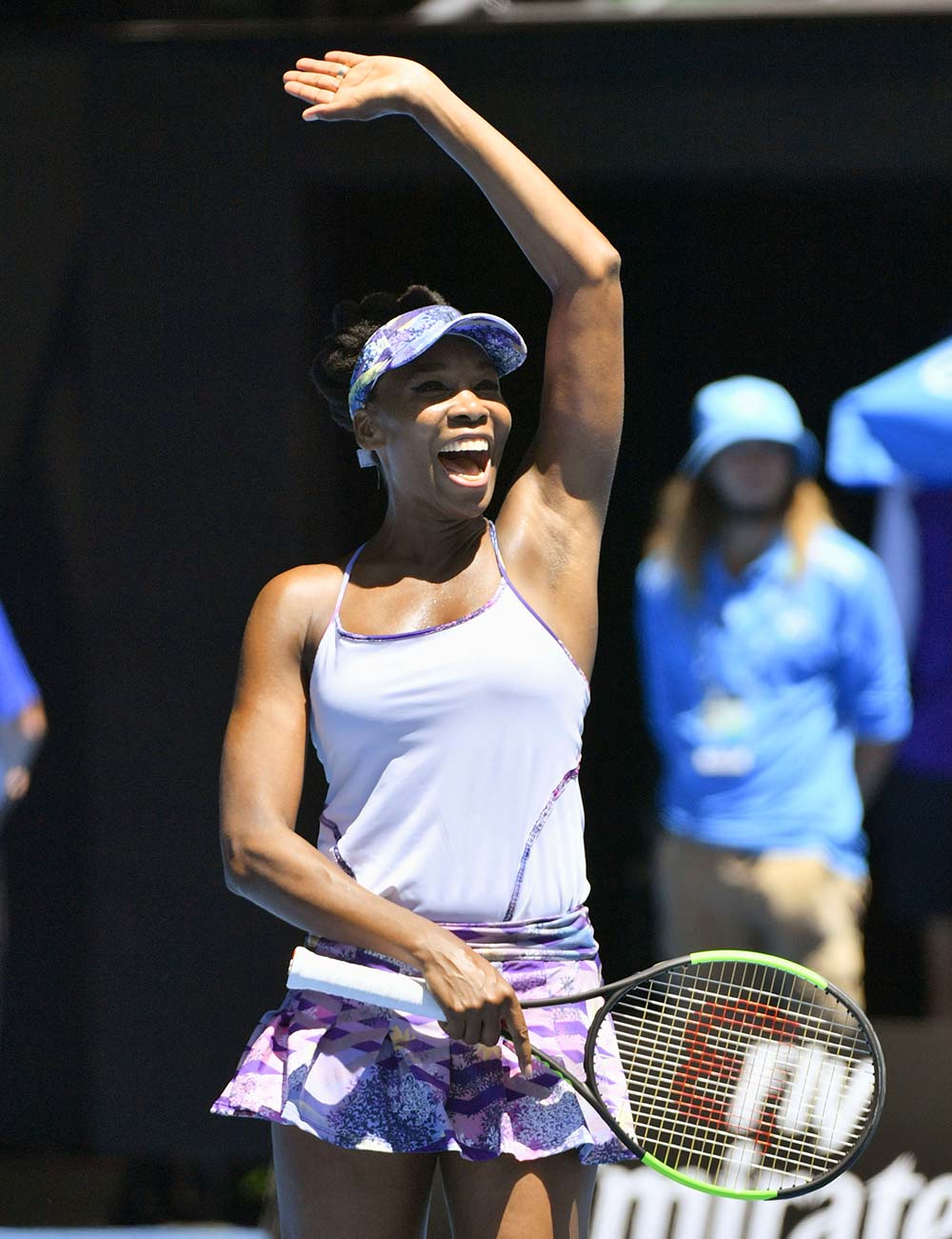 Venus Williams of the United States acknowledges the crowd after defeating Anastasia Pavlyuchenkova of Russia 6-4, 7-6 (3) to advance to the Australian Open semifinals in Melbourne on Jan. 24, 2017. (Kyodo)

In an effort to clear his name, Adler spent 20 hours a day on Twitter to get his name and reputation back.

The monumental stress then caused him to have a heart attack. But Adler is now chasing the justice that he never should have sought. He is suing ESPN for wrongful termination. That case begins in Los Angeles on October 15.

“They didn’t have good cause and I didn’t do anything wrong,” Adler told NBC’s Today show.

“They killed me, they made me unemployable. They ended my career, they killed my reputation, my good name. What else was I supposed to do?”

How did ESPN react to the 60-year-old trying to take them to court? Well, they engaged in a bit of warfare of their own.

She ruled that there are “try-able issues of wrongful termination and negligent infliction of emotional distress in Doug Adler’s lawsuit.”

ESPN has, naturally, denied the allegations.

But, in a startling exhibition that showcases ESPN’s double standards, no action was taken against African-American TV host Steve Harvey when he actually compared basketball team Golden State Warriors to ‘gorillas’.

As sports columnist Clay Travis pointed out, how is it that Harvey can come on ESPN and compare a team, predominantly made up of African-Americans, to gorillas and nobody takes any notice?

Adler has his life turned upside down and Harvey carried on as usual. What does that say about ESPN?

17th-century prose writer Baltasar Gracián, a man later lauded by philosophers Arthur Schopenhauer and Friedrich Nietzsche, once said: “Never contend with a man who has nothing to lose.”

Adler is such a person. Everything was taken away from him. He himself has said he has felt vindicated even making it this far, but many are willing him over this final hurdle.

Moreover, this trial could also have enormous implications on freedom of speech. The persecution of Adler just highlights that political correctness is one of the scourges of our time.

Despite playing against tennis professionals for much of his life, Adler’s greatest match is just around the corner – hopefully, he’ll be the victor.

With world sport on indefinite hiatus, the time is upon us to revisit classic moments. Leo Barry’s Mark. Zab Judah’s noodle-legged dance after Kostya Tszyu zapped him on the chin with a deadly right hand. Patty Mills dropping 17 to clinch the 2014 NBA finals. These moments tell of championships, career-defining victories and fierce rivalries. […]