Another college football weekend is in the books, and it was a season-defining one, with so many ranked teams falling. Let’s take a look at who covered themselves in glory and who didn’t, with Week 7’s heroes and villains.

Heroes
Louisiana State: huge victory against Georgia for their first against a team ranked in the top two since 2011, and, at least in my estimation, that makes the Bayou Bengals the best team in the SEC not named Alabama.

The dominating 36-16 win represents quite a shift in the conference’s pecking order. Big day for head coach Ed Orgeron who is 5-2 against top ten opponents since his disastrous tenure at Ole Miss.

Tennessee: if there’s a coach and a program who desperately needs a win it’s Jeremy Pruitt and Tennessee. They got it Saturday, beating a ranked Auburn 30-24 on the road in Jordan-Hare Stadium.

Sure, the Tigers are going backward in a serious hurry, but that won’t concern the long-suffering Volunteers fans.

Tyler Huntley: the Utah quarterback had a doozy of a night, recording 201 passing yards, 64 rushing yards and also caught a 58-yard pass. He completed the cycle, with a passing, rushing and receiving touchdown.

That’s the most receiving yards for any Buckeye receiver since 2004.

Nate Stanley: six touchdowns for the Iowa quarterback as the Hawkeyes routed Indiana 42-16 to improve their record to a respectable 5-1 with at least a couple of winnable games left. 2018 is just one more season where Kirk Ferentz’ program is flying well under the radar.

Texas Tech: we expected a shoot-out between the Red Raiders and Horned Frogs on Thursday night and instead got a defensive struggle – definitely not something you normally associate with the Big XII conference these days. 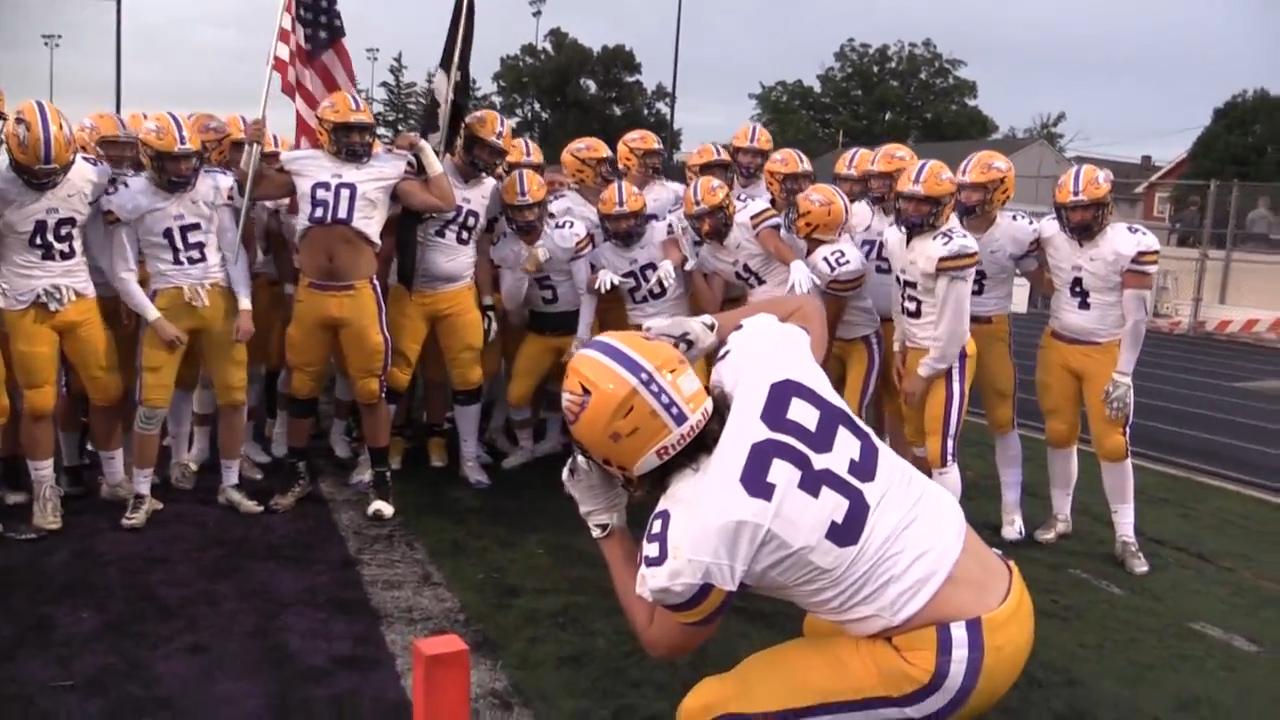 College footballers psych themselves up before game

Michigan: the Wolverines finally won a big game in the Jim Harbaugh era, dominating Wisconsin in the Big House for a 35-13 decision. That defence is on fire and we’re not talking about this team failing when it counts the most. If Texas is back, so is Michigan.

Central Florida: it wasn’t easy and wasn’t pretty, either, but the Knights beat Memphis 31-30 after trailing sixteen points for their nineteenth straight win,

Oregon: the Ducks are back to national prominence after a 30-27 overtime win over Washington. Considering the Huskies have belted the Ducks in their last two meetings scoring 70 and 38 points respectively, this was a huge step forward, and definitely Mario Cristobal’s biggest win in Eugene.

Villains
Nebraska: the Cornhuskers are still winless under Scott Frost. They came close on Saturday in Evanston, going to overtime against Northwestern, but the Big Red couldn’t score any points in the extra frame and fell 34-31. It’s the first time the Huskers have started 0-6 in 129 years.

Alex Hornibrook: the Wisconsin quarterback didn’t have a completion (to a player in a Badger uniform, anyway) from 1:58 to play in the first quarter through 4:48 remaining in the fourth. He completed only six passes all game. Nightmarish stuff.

Miami: just like last year, the Hurricanes suffered a bad loss to an unranked opponent. It was Pitt on Black Friday a season ago and Virginia this year. The Canes lost 16-13 in a largely forgettable game. Unless you’re a Cavalier, of course. 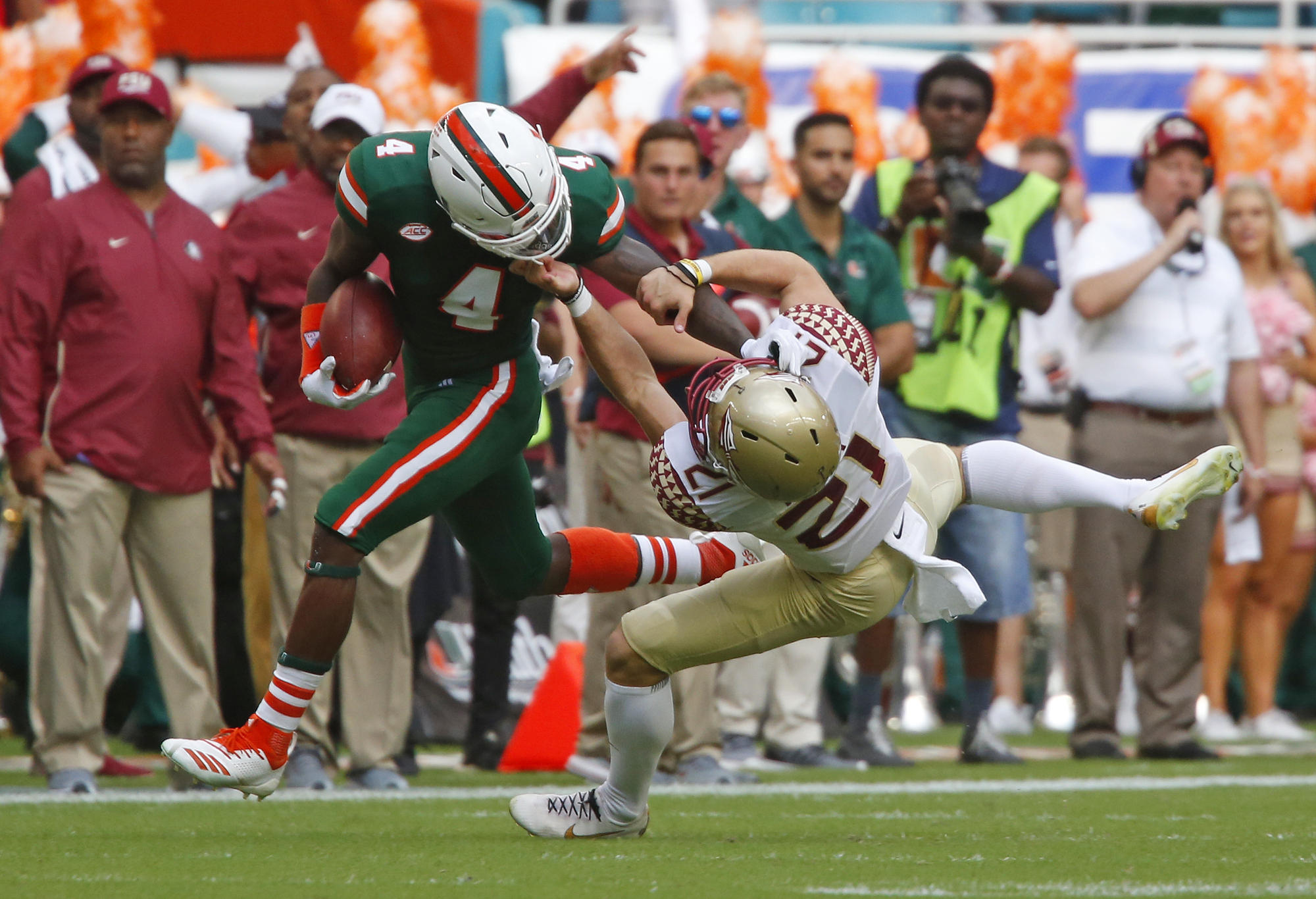 Pac-12 and Big XII Playoff hopes: with Washington falling to Oregon and Colorado to USC on the west coast and West Virginia losing to Iowa State in the Midwest, both conferences are on the outside looking in as far as a spot in the four-team college football playoff goes. And it’ll likely stay that way, too.

Ohio State’s defense: in summary, it’s not great. They’re giving up chunk plays with regularity, and when you’re doing it against good teams that’s one thing, but getting gashed by the likes of Minnesota and Indiana doesn’t bode well for the future, when they’re going to see teams like Michigan, whose offense is more potent than those of the Hoosiers and Gophers. Watch this space.

Will Grier: two brutal games in a row for the West Virginia quarterback and his Heisman stock has plummeted. At least last week the Mountaineers won. The same cannot be said of this week, WVU losing to Iowa State on the road, managing just 152 yards of total offense in the decisive 30-14 defeat.

Peyton Henry: the Washington kicker, after being iced twice, hooked a potential game-winning field goal as regulation time expired at Autzen Stadium. Oregon would go on to win in overtime. College kickers…

Penn State: lost at home to a bad Michigan State, who last week suffered a double-digit loss to Northwestern.

Oklahoma State: lost 31-12 to Kansas State in Manhattan, but the primary reason they appear on the ‘Villains’ list is that their streak of nineteen consecutive wins when leading at halftime – they were narrowly up 6-3 on the Wildcats – comes to an end, as does their streak of thirty-two games with at least one first half touchdown. This team has regressed after looking decent early.