American football moved offshore for the first time this season, with Wembley Stadium in London hosting the match between Seattle Seahawks and the Oakland Raiders.

It was a smart move by the NFL, taking advantage of the FIFA international break to ensure there was no competition from the Premier League. The crowd of 84,992 was an NFL record at the venue.

Seattle ran out easy winners 27-3. Oakland offered little and quarterback Derek Carr was sacked six times. The Seahawks move to 3-3 while the Raiders languish at 1-5 at the bottom of the standings.

Wembley will host a further two matches over the coming weeks.

It didn’t begin well for the Giants, with quarterback Eli Manning throwing an interception in the first drive and the Eagles scoring on the subsequent possession. Manning had a bad night. He was sacked four times and didn’t throw a touchdown pass.

By the second quarter, Giants fans were venting their frustration.

The only bright spot for New York was the spectacular form of rookie running back Saquon Barkley, who made some stellar runs, including a 50-yard touchdown. The 180cm, 104kg recruit from Penn State had a career-high 229 yards. Hailing from the Bronx, Barkley grew up a New York Jets fan but looks to have a great future with the Giants.

At 1-5, New York look cooked. How long will Manning last? Coach Pat Shurmur came out in defence of his beleaguered quarterback, saying, “We believe in Manning.” Fans may not hold the same belief.

In an eagerly anticipated clash at Foxboro, the New England Patriots took on the unbeaten Kansas City Chiefs in a game didn’t just live up to expectations, it smashed them out of the park.

An early interception by Dont’a Hightower set up a Patriots touchdown to Sony Michel. Quarterback Tom Brady hit Julian Edelman with a long pass for the Pats’ second touchdown and they finished the half 24-9 in front.

If the Chiefs were getting schooled in the first half, the second half was a different story. Quarterback Patrick Mahomes found Kareem Hunt on a deep pass for a massive 67-yard touchdown.

A spectacular 97-yard kick-off return by Tremon Smith set up a touchdown to give the visitors the lead in the fourth quarter, only to surrender it to a Brady touchdown.

After the kick-off, Mahomes found Tyreek Hill with a long bomb, who ran in for a touchdown to level the scores at 40-40, before New England kicker Stephen Gostkowski held his nerve to kick the winning field goal as the clock ticked to 0:00 – the Pats getting up 43-40.

It was a cracking match and it wouldn’t surprise if these two fight it out for the AFC Championship. 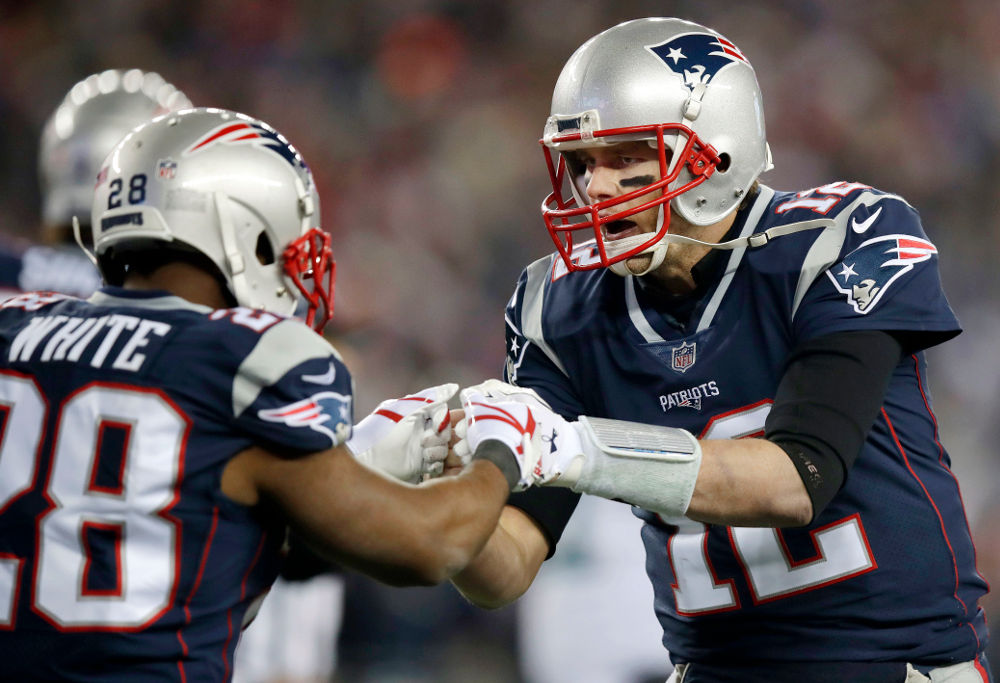 Close games were the order of the day in Week 6.

The Pittsburgh Steelers and Cincinnati Bengals played out a gripping encounter at Paul Brown Stadium.

With 15 seconds to go and trailing 21-20, the Steelers’ Ben Roethlisberger passed to Antonio Brown, who ran 30 yards for the match-winning touchdown, 27-21.

The Tampa Bay Buccaneers almost pulled off a spectacular, rugby-style final play against the Atlanta Falcons.

Bucs quarterback Jameis Winston crossed the line of scrimmage and sent a lateral pass that was lateraled again to DeSean Jackson only a few yards from the end zone. But Jackson couldn’t hold on and the Falcons won 34-29.

The Miami Dolphins returned to the winners circle courtesy of an exciting 31-28 home overtime win against the Chicago Bears.

If the Super Bowl was held tomorrow, it would be the 6-0 Los Angeles Rams against the 5-1 Kansas City Chiefs. It’s early days though, and the Chiefs have a swag of 4-2 teams breathing down their neck.

Brett Gosper, the Australian who’s overseen the global growth of rugby union over the past decade as World Rugby’s chief executive, is leaving to join the National Football League (NFL) as the American sporting giant’s head of Europe and UK.

Kansas City Chiefs star, Tyreek Hill, finishes off a touchdown in style by backflipping into the endzone on what turned out to be a career-best day for the wide receiver. 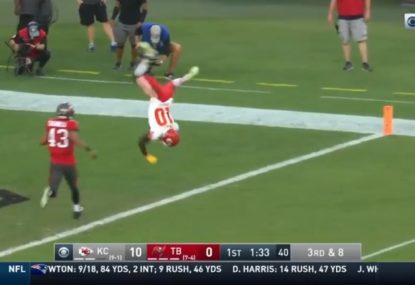