New Western Sydney coach Markus Babbel says the pre-season criticism of his team is funny, and he hopes it won’t be long before the doubters are silenced.

The Wanderers were widely tipped to miss out on the finals this A-League season, and they did little to change that opinion with a horrible first half display against Glory on Sunday.

But the Wanderers shot to life in the second half, and could have secured the win if not for Oriol Riera’s close-range miss in the 75th minute.

Babbel, a former German international, was thrilled with his team’s second-half display against a Glory outfit widely tipped to challenge for the title.

He hopes the 1-1 draw on enemy territory will be the start of something special.

“They can say whatever they want,” Babbel said of the critics.

“For me it’s only funny because I never see someone on my training pitch. They don’t know what we’re doing and what’s going on.

“The club is fantastic. Sometimes it takes a bit of time to go somewhere. I believe the club can go to a different stage. The only thing we can do is show it on the pitch.

“But on the pitch, you’ll see there’s a result there, there’s a performance there, and it’s the only chance you have to make them quiet.”

The Wanderers were hopelessly outclassed in the first half against Glory.

But Babbel wasn’t worried – knowing full well his team were playing way below their potential.

He used his half-time speech to urge his players to take a nothing-to-lose approach.

“I said we are better than this, because I see you every day at training and we can do it much better,” Babbel said.

“No one expects anything from us. So don’t be shy. Don’t be nervous. For what?

“The second half was much better. It was what I wanted to see. We have a lot of work in front of us. But we are happy with the point.”

The Wanderers will face another tough challenge on Saturday when they take on Sydney FC at the SCG. 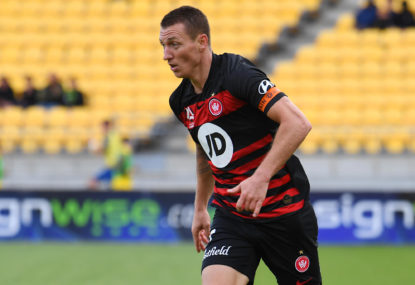