How Melbourne Victory will polish their Keisuke Honda diamond

Lost in the hype around Melbourne Victory’s headline signing of Keisuke Honda was how Kevin Muscat would fit the playmaker into his side.

Having already signed James Troisi to an Australian marquee deal, and both players typically playing as No.10s, it was not entirely clear how the coach would get both into a starting team.

Since replacing Ange Postecoglou, Muscat has always been a 4-2-3-1 man – he had Besart Berisha, a classic, all-round No.9, to lead the line for four years. Either side of Berisha was powerful wide forwards like Leroy George, with a midfield two sitting behind and protecting the back four.

The style of play was energetic pressing, ruthless counter-attacking and efficiency in front of goal. Given their success in that period, there was little argument to change.

The off-season comings and goings, however, made it difficult to see how Muscat would continue with this template. Short of making Jai Ingham a starting player, or shoehorning Honda or Troisi into a wide position, there’s no natural left-winger in the team, especially if Kosta Barbarouses is used on the right.

Both surprisingly and unsurprisingly, therefore, the opening round of the new season saw a very different Melbourne Victory, formation-wise.

It was a 4-3-1-2 formation, with Barbarouses upfront alongside Kenny Athiu, Troisi tucked in behind them and Honda, Raul Baena and Terry Antonis creating a formidable midfield three. It was essentially a midfield diamond, but with some interesting tweaks. 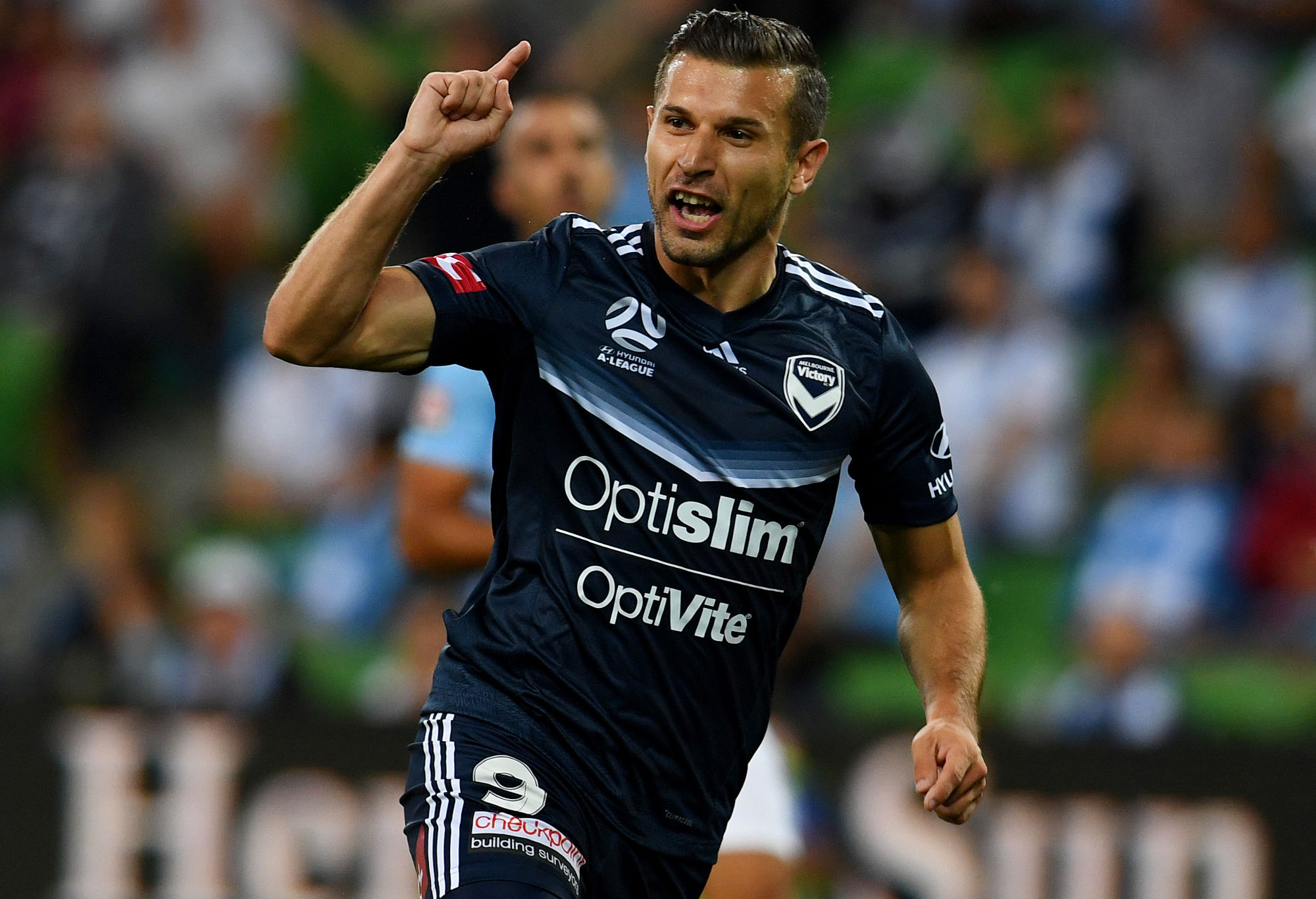 Firstly, the fullbacks, Corey Brown and Storm Roux, stayed deep, positioning themselves in front of the opposition wingers. Normally both push high, getting beyond their direct opponent. Instead, they played closer to the centre-backs, receiving the ball with pressure coming from in front (rather than from the side).

This is something Brisbane have done in the past. It has two effects: when circulating the ball, it draws the opposition wingers and forwards up the pitch, creating space behind them for midfield players, and secondly, it means there is less distance between the fullbacks and the ball to cover if the ball is lost and the opponent counter-attacks.

The flipside is that because the fullbacks are not positioned beyond their opponents, they cannot receive passes to break lines or bypass defenders.

Roux and Brown are both mobile, quick fullbacks who previously played attack-minded roles for Central Coast Mariners and the Roar respectively, but they were more cautious here, helping the back four move the ball patiently from one side to the other.

The second interesting tweak was the movement of the outside central midfielders (the middle 3 in the 4-3-1-2). Baena stayed centrally, connecting the build up from a position in front of the two centre-backs, and always looking to get free while screening the defence. Meanwhile, Antonis and Honda both rotated into wide areas. They either tried to draw their direct opponent out, creating passing lanes through the centre of the pitch, or could receive passes in these wide areas away from their marker.

In this sense, the movement of Honda into right-sided positions was effective, particularly when coupled with the natural inclination of Troisi to drift towards that side. With Roux occasionally overlapping as well, Victory created goal-scoring opportunities from this area of the pitch, including the neat build-up involving Honda that ended with him finishing the move with a cracking header. 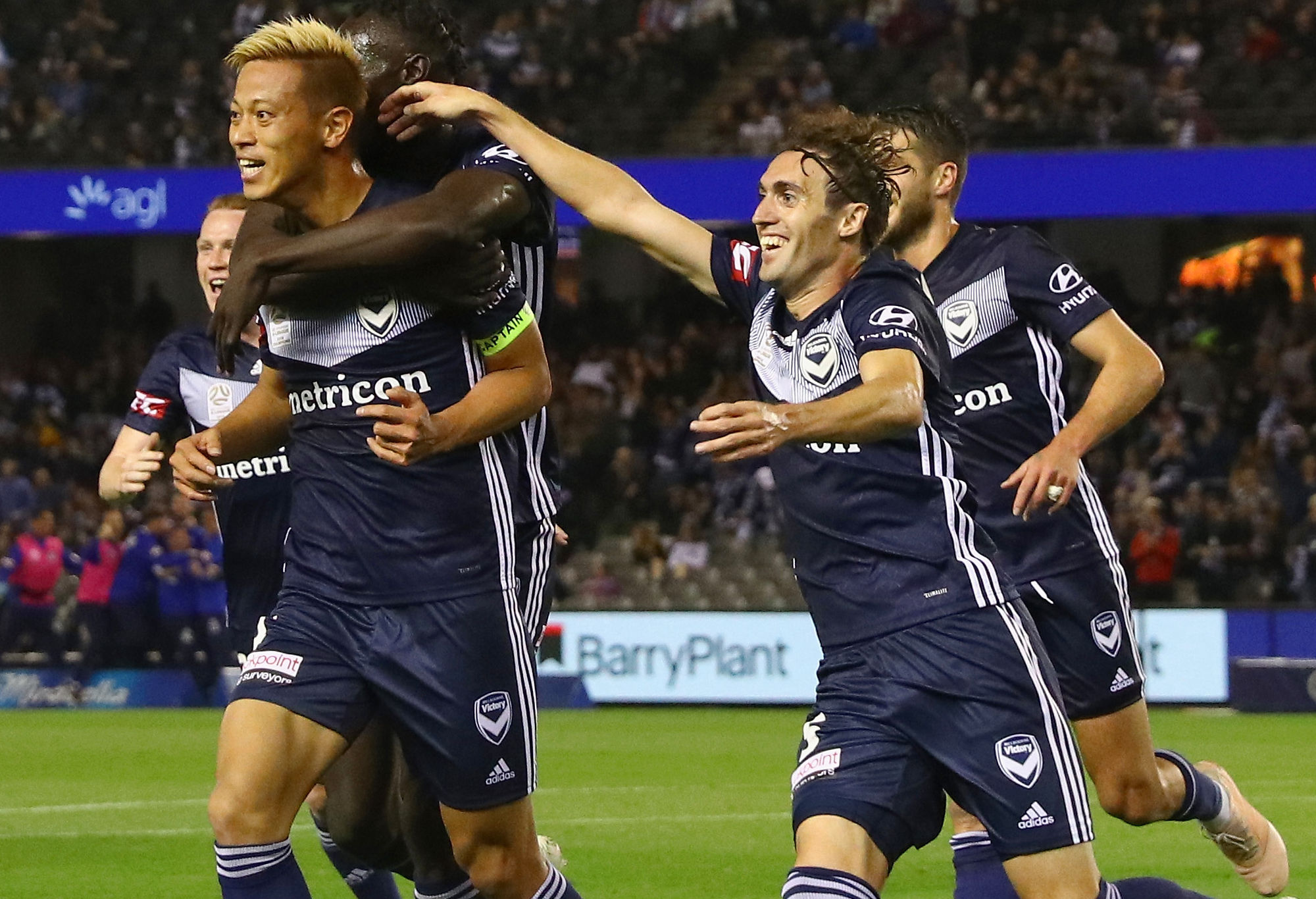 Finally, Muscat used Barbarouses upfront with Athiu, which is a change in position for the Kiwi, who made his name in the league as a wide player.

Presumably, Ola Toivonen will take Athiu’s place once fit again from the injury. Toivonen is a curious forward who normally plays as the deeper of a strike partnership for Sweden, and has also played out wide or in midfield for previous clubs. Therefore, Muscat might be planning to have Barbarouses (and possibly Troisi) running off Toivonen, making darting runs to stretch defences and get in behind, allowing Toivonen to move deeper and link the play.

A recurring pattern in the Melbourne Derby was the fullbacks receiving in their deeper positions, the central midfielders rotating into wide areas, and the front two moving into a passing lane to receive forward passes from the fullbacks. The quality of these moves was not always smooth, but you could see the intent and process in how Victory wanted to get players free in attack.

The key to the diamond, however, is how it gets Honda into his preferred, right-sided attacking midfield position. It does not entirely suit Antonis, better in centre midfield than out wide, Barbarouses, better out wide than upfront, nor the fullbacks, better overlapping constantly.

But it does mean Honda has freedom to drift around the pitch, move towards the ball to get free, and combine with the other creative players.

There are also question marks defensively, most obviously when Riley McGree sprinted past Honda to score the winning goal.

The change to a diamond formation sums up Muscat’s priority this season – build the side around the key player, and hope he can deliver enough to maintain Victory’s recent success.