After 137 years, the Wanderers ‘return’ to the Sydney Cricket Ground

The Western Sydney Wanderers take on Sydney FC this Saturday in the first Sydney derby of the 2018/19 A-League season.

It’s the first time the Sydney derby will be played on the Sydney Cricket Ground (SCG). It will not be the first Wanderers team to play there though.

Way back in 1881, another side called the Wanderers took part in the first game of association football played on the famous old ground.
Before the 1880 football season, rugby (union) held sway and was the only organised football code in Sydney.

Rugby had suffered by not having access to any enclosed grounds where an admission fee could be charged.

In 1880, Rugby’s dominance was challenged when not one but two new organised sports sprang up: Australian rules football and association football (soccer).

With an upsurge of interest in winter sports, the Trustees of the Sydney Cricket Ground (then known as the Association Cricket Ground), took the prudent step of allowing football to be played there for the first time.

The SCG was the only enclosed venue in Sydney. There were benefits for all parties: football could finally earn revenue and the SCG Trustees could collect some much-welcomed winter rent.

Not everyone was happy with the new arrangement. A letter writer to The Sydney Morning Herald going by the non-de-plume, ‘Cricketer’, said he was “thunderstruck at the announcement” and that it was “a great injustice to cricketers.”

With three football codes vying for the use of the venue, the trustees performed a kind of trial, rotating the lease of the ground between all three codes in successive weeks.

For the first time, the ability to draw a gate was crucial. In those early battles for football supremacy, any code that could draw big crowds would gain an advantage.

Rugby was to have first use of the ground. But the weather was unkind and the match was cancelled.

Association football was next up the following week but that match too was rained off.

Finally, on June 18, 1881, the first football game was played: an Australian rules match between East Sydney and Sydney.

The following Saturday, 25 June 1881, the association footballers had their first run on the SCG.

The game was played between a club called Wanderers (no affiliation with the current club) and Redfern.

Wanderers had an experienced team with a good knowledge of the rules of association football, whereas Redfern was a rugby club helping out a fledgling fellow code.

Winning the toss, the Wanderers chose to run with the strong wind at their backs. The play was camped in the Redfern defensive end and by half time, the Wanderers were leading 5-1.

Owing to the unevenness of the contest, it would be fair to speculate that many of the 300 or so spectators were more interested in the footrace during the interval than the game itself.

At half time, Ned Gregory, a test cricketer and the ground’s curator, roped off a 120-yard running track. Two competitors, Morgan and Martin stepped onto the track, Morgan getting a three-yard start in a race for the hefty stake of 50 pounds.

While Gregory was taking his time setting up, “a good deal of wagering was indulged in” according to the Evening News.

As is often the case with sporting half-time entertainment in Australia, there were farcical scenes; this time because the starting pistol could not be fired, and eventually the race was got under way by the rather old fashioned and slightly embarrassing method of dropping a handkerchief.

For the record, Mr Morgan won the race, and after the players had shivered for over half an hour on the sidelines, the second half of the football match began.

Football is no stranger to the SCG and its history pre-dates rugby league’s 1911 debut at the ground by some 30 years.

The ground was used for international matches in 1937. A match between New South Wales and the England FA amateur team at the ground drew a crowd of over 30,000 and in a test match the following week, Australia beat England 5-4 in front of nearly 40,000 fans. 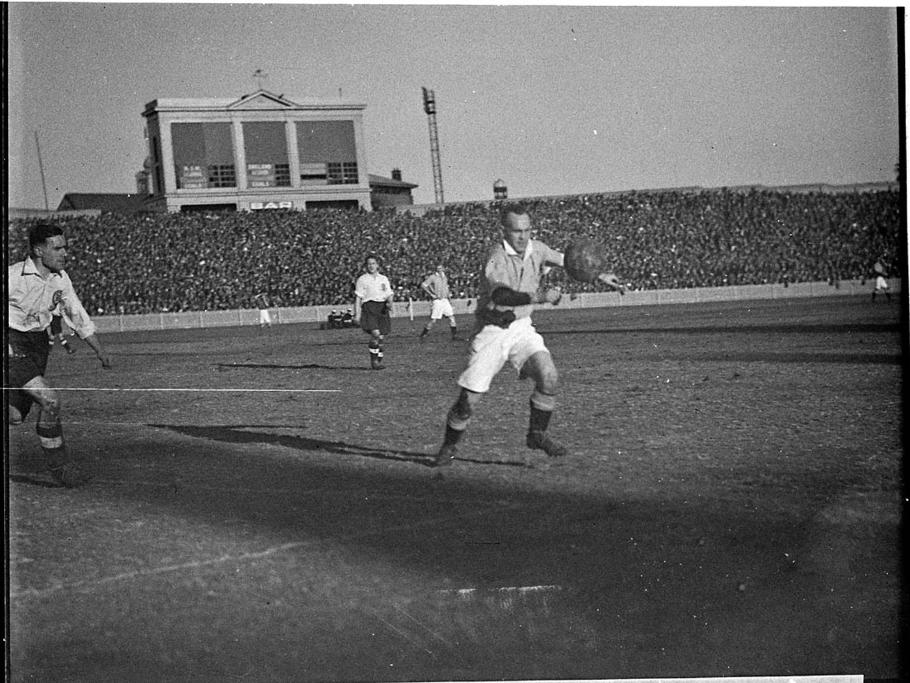 It’s been 137 since the first association football match at the SCG between Wanderers and Redfern in 1881. To authentically relive that occasion we would need to organhalftimetrace at half time. But to grab people’s attention these days would require a world class sprinter and surely there are none on our shores at the moment. On second thoughts, maybe there is one.