Bit of class Wayne, that's all we Novocastrians ask

‘What Wayne did’ is a common topic for conversation here in the Hunter. A more popular chat is ‘the f-cking mess Bennett made’.

In a nutshell, he did such a job on the red and blue that an 11th-place finish in 2018 was good enough for the current coach to be signed to an open-ended contract.

This year, we celebrated missing the eight – by 12 points – like it was ’97 all over again. Because 11th isn’t last, which is the position we finished for the three years following Benny’s departure.

The man who Rabbitohs general manager of football Shane Richardson lauded as “one of the best, if the not the best, rugby league coaches of all time” may have seven premierships on his resume, but his three years in Newcastle are a black mark on his CV.

One finals appearance and a complete disaster of a roster was all the club had by the time Benny decided he wanted to head back to Brisbane (with a year to run on his contract, for what it’s worth).

As for Wayne, well, if the rumours are true (and they rarely are), he walked away $4.5 million richer for the experience.

So the essentials read like this: Wayne got paid seven figures, then left us lying prone in a ditch. I’ve been mugged before, that was pretty much the sum of it (well, except the quivering junkie who smashed me over the back of the head wasn’t a millionaire after his efforts).

Now, before I get any more steamed up over the coach who robbed us, it’s worth remembering that a fish rots from the head, and Benny wasn’t in charge of front office during his tenure at Turton Rd. 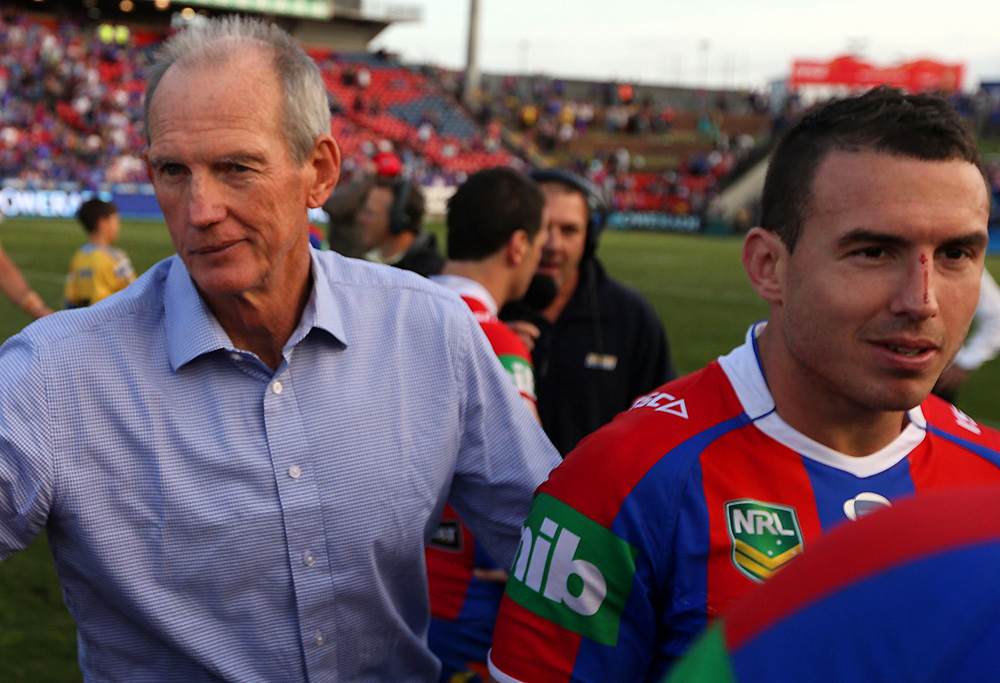 Nathan Tinkler has far more to answer for than Bennett in regards to the disaster the Knights have been until Wests took over last year, which means South Sydney can feel confident that they’re not getting a bloke who’s going to take a paycheque and leave a disaster behind him.

With the benefit of hindsight, the clubs’ respective media releases after landing Bennett are telling.

Here’s what he was quoted as saying as the Rabbitohs announced he would be the gaffer in 2020:

“I’m really grateful for the chance to be part of the club and I’m looking forward to being part of the Rabbitoh way (editorial note: I de-capitalised ‘the’ and ‘way’, because piss off, ‘The Rabbitoh Way’ isn’t a thing).

“I’ve always respected South Sydney and its 30,000 members, I’m really looking forward to being part of the Rabbitohs family, and I can assure the members that I will do my very best for the club.”

Big focus on the club and its members.

By comparison, here are some of the lines Benny signed off on as being from his mouth when Hunter Sports Group signed him in 2011:

“I sat down with Nathan and was struck by his passion and knowledge of rugby league.

“Private ownership appeals to me. I like it. This guy wants to take Newcastle to another level.

“He wants our game to capture the imagination of the Hunter like never before – for the Knights to be the benchmark of rugby league in this country.”

Respect for the Knights and the club’s members? Ha! That was pure piss in the owner’s pocket. Essentially: I’m here for Tinkler. Oh, there’s a team as well?

And as much was made face-slappingly clear when, after Tinkler handed the joint back to the NRL, Benny cited the fact his deal was with the former billionaire, not the club, so he was free and clear to walk away.

Which he did, saying, “I believe it will take a number of years to reach an acceptable position and that is what I am unable to commit to. A longer-term coach is crucial for future success.”

Which, to be fair, is his prerogative. Legally speaking, Bennett did nothing wrong. He was paid for services rendered, then walked away when he decided it wasn’t worth his while anymore. If you haven’t done that before, you need to sort out your work-life priorities. What’s more, his contract had significant bonuses for winning the comp, so the fact he stacked his roster with a bunch of blokes who gave the Knights a premiership window of approximately 15 minutes was sort of to be expected.

All of which is to say, if Wayne Bennett owned the fact he purely came to Newcastle for the money and then left when that particular river ran dry, well, I reckon most of us could cop it.

But he’s been such a dick about his time here ever since leaving.

Nathan Brown attracted headlines with his ‘big head-little head’ comments in April, but earlier that week Bennett had said of Brown’s efforts in Newcastle: “he unbuilt it, so I suppose if you unbuild it, the next thing you’ve got to do is rebuild it.”

Whatever, we’ll move on – to this week.

You see, this wasn’t the first time Benny’s had an offer from Russell Crowe. In 2011, Bennett knocked back a deal with the Cardinal and Myrtle – to join Newcastle.

Speaking to the Daily Telegraph on Thursday, Bennett said, “I always regretted that decision.”

Sorry, you what? You actually said that?

Like, good for you and the respect you’ve always had for your future employers and their members, but how about showing a bit of appreciation for the place that lined your pockets for three years, in return for one faint sniff of a premiership?

And here’s the thing about the Newcastle Knights: on-field success has never been the determining factor for the fans’ love.

I mean, how could it be? My missus is ruthless about the fact my team sucks. And we do. We just plain suck. I mean, I’ve seen teams suck before but we’re the suckiest bunch of sucks that ever sucked (except maybe for Parramatta).

If Andrew Johns had grown up in Carseldine rather than Cessnock, we’d have zero trophies in our cabinet. Fact.

So while Mal Reilly and Mick Hagan are prominent in the club’s history for winning grand finals, there’s also a special place for the likes of David Waite, Warren Ryan and Rick Stone.

Hell, inaugural coach Allan McMahon led the club to precisely zero finals campaigns, yet he’s held in such esteem that he was one of the first five men inducted into the club’s Hall of Fame – on a list with the likes of Joey and Paul Harragon.

As for Benny? The man doesn’t say much, but he’s talked enough trash about the Knights in the years since his departure that I doubt he’d be welcome at Old Boys Day.

And I’m sure he doesn’t care – why would he? The bloke’s a legend at the Broncos and St George Illawarra and will go down in history as perhaps the greatest coach of all time.

But he’s not one of us. He’s just some bloke who hung around the Knights for a few years.

Let’s just be clear though: the fact he didn’t win a premiership in Newcastle isn’t the blot on his copybook. It’s the complete lack of class, grace or gratitude he’s shown our proud club since his departure.

I hope things work out for you, Bunnies supporters. As I mentioned above, the fact he’s coming to a club with strong off-field leadership bodes well.

But when it comes to Wayne Bennett, three years in Newcastle have earned the supercoach a ‘buyer beware’ reputation.