Three reasons why free agency is good for the AFL

The concept of free agency is relatively new to the AFL.

Those living in Melbourne in particular have witnessed endless hang-wringing and navel-gazing during the recently closed trade window. They could be forgiven for thinking that its introduction has fundamentally changed the fabric of the game.

They would be wrong, for three reasons.

1) Movement has always occurred in the AFL, albeit on smaller scale;
2) Other sports have long used a similar model with no obvious long-term detrimental effects to the game – e.g. footbal and NRL;
3) It actually adds to the narrative of the sport, especially in the off-season.

No.1 – “Nothing New Here!”
Casual observers or those new to the game would be forgiven for thinking that prior to the last few years, all VFL/AFL were staunch one-club men who plied their trade through thick and thin for the club that deigned to sign them originally (not that they had any choice, because the club they signed for as a teenage was pre-determined by the zone they live in).

It’s also worth noting here that during these halcyon days, the sport was basically amateur, and the players barely paid for their loyalty.

Scrape the surface of the past though and remove the rose-tinted spectacles to reveal a truth that is far from the lore of misty-eyed revisionists.

Luminaries such as Ron Barassi, Ian Stewart and John Pitura who boast a host of VFL Premiership, Brownlow and All-Australian honours between them as players and coaches, switched teams in the VFL area.

Sure, the moves were controversial, ate up much column space, and no doubt riled fans, but the moves did take place, and the sport not only endured, but has prospered over the years into the era of professionalism.

In the ‘modern’ AFL era, legends such as Tony Lockett, Wayne Carey and Chris Judd have all also swapped clubs for different reasons.

No clubs fell over, memberships did not decrease and TV viewership did not fall.

On the contrary, under Andrew Demetriou’s stewardship, the AFL recently presided over the most spectacular increase in revenue and commercial interest in its history. Clubs have never been better off, or better supported.

It would seem that movement has always occurred then, albeit on a lesser level, and that today’s version is just a new variation on an old tale.

The variation is that something that vaguely resembles a move towards equalisation of rights between the league and players has taken place, in line with contemporary attitudes towards workers rights. 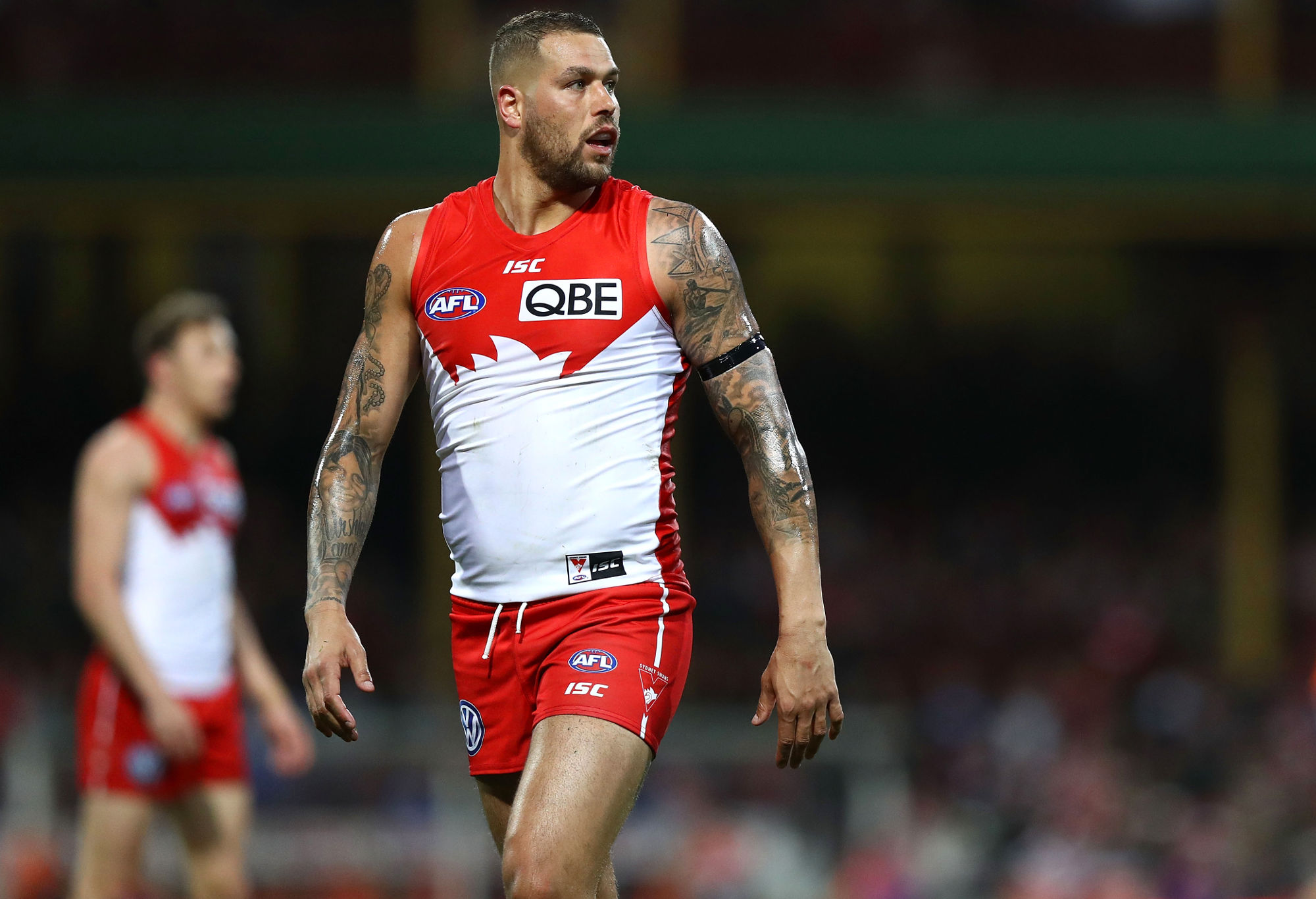 Lance Franklin of the Swans is one of the more high profile AFL free agents. (Photo by Ryan Pierse/Getty Images)

No.2 – “What’s so special about the AFL?”
Players, fans and officials from other major football codes in Australia, particularly rugby league and football, are often bemused by the furore caused by mid-season speculation about the future destination of currently contracted players on an AFL roster.

Such speculation is par for the course in these sports, and does not seem to cause an undue amount of disruption inside their respective camps.

Of course, some people will always be unhappy when certain players leave, but when done properly, isn’t it also a fantastic opportunity to celebrate a player’s contribution to the club?

A prime example of this was Wests Tigers fullback James Tedesco who got a guard of honour for his last game with the club before joining the Sydney Roosters. 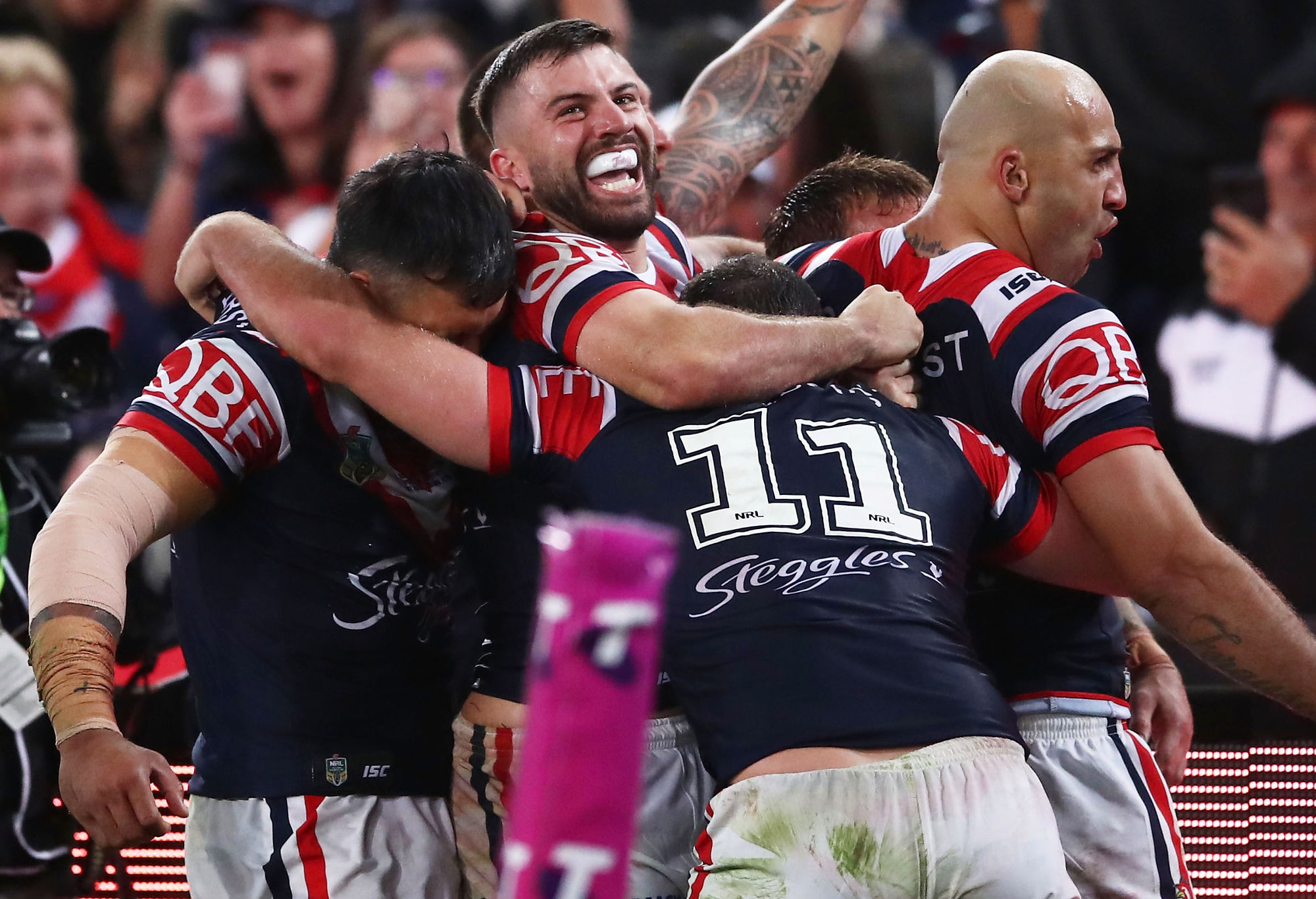 Surely that is only fair, given that the alternative would seem to be not allowing that player to look at other opportunities, and therefore potentially expose himself and his gamily to the very real possibility that his current employers will not offer him a new deal, and the will therefore find himself unemployed with no time left to secure alternative employment.

No.3 – “Year-Round Relevance, and Never-Ending Coverage”
All sports want to maximise the time during the year that eyeballs are on them. Whether on-screen, in print media, on the radio or online, administrators and club officials want to be front and centre. More exposure equates to more sponsorship dollars and bigger media deals.

A cursory look at timelines around when rival codes publish their ‘participation’ figures shows how previous and protective they are towards their own codes.

It is alleged that AFL buried media coverage of what was a landmark deal between the FFA and Foxtel by holding back the announcement of its own mega rights deal which dwarfed soccer’s deal with a view to depriving soccer of it’s day in the sun.

Who would’ve thought the timing would be that close. What a coincidence!

No sport has the moral high ground when it comes to updating the others with optimistic participation statistics – not when there is a rival code to try and bury. 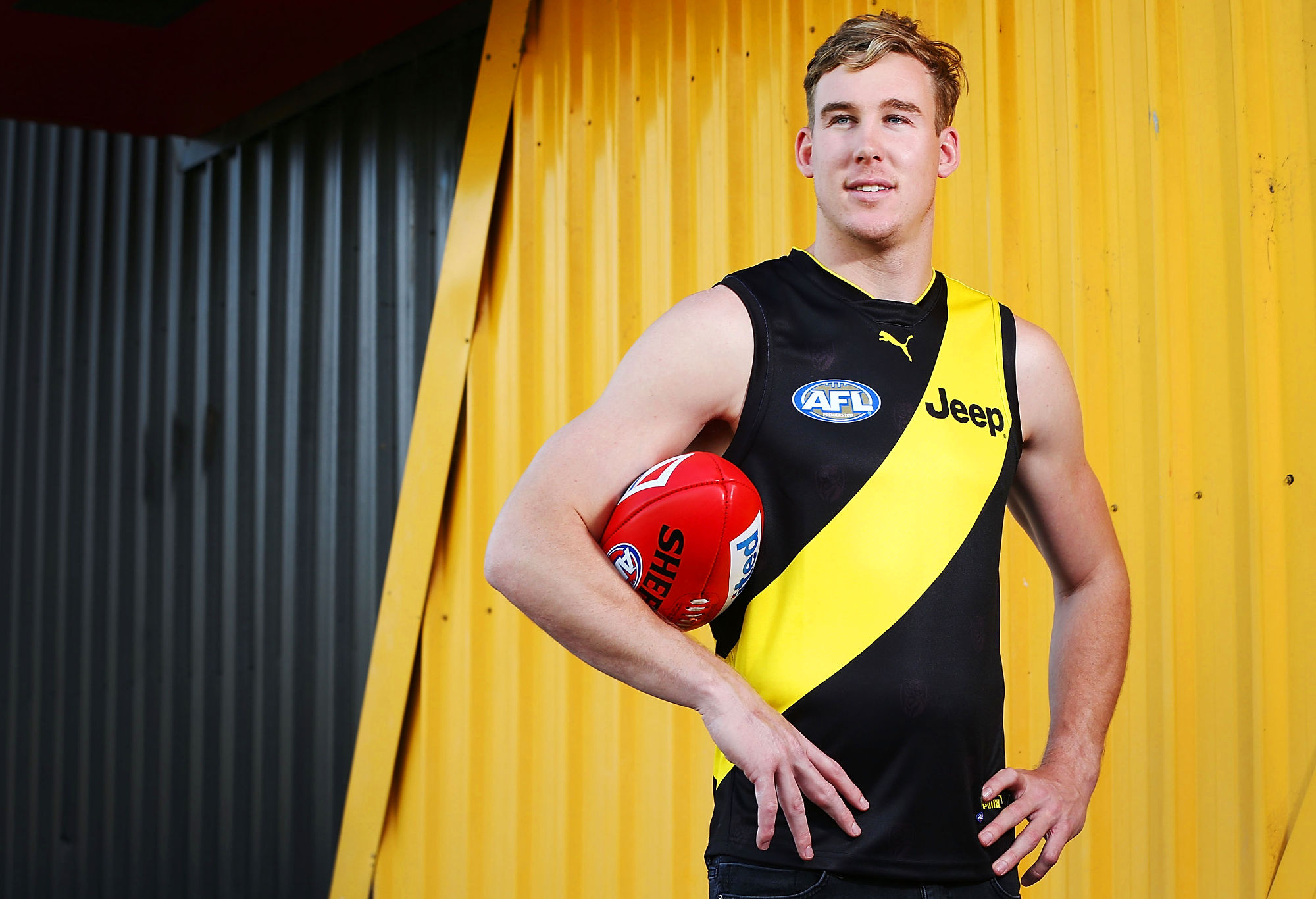 Rather than engage in what many see as low-level and disingenuous tit-for-tat media release exchanges, isn’t it more engaging to the fans and of genuine interest to the average punter to read about and debate the latest trade rumours and moves?

Instead of viewing it as the death knell for their sport, league officials and fans alike should view the trade period as manna from heaven in their quest to disrupt the limits imposed by the traditional sporting calendar.

For example, spring and summer trade moves could potentially wrest some of he attention away from the traditional sports of cricket and tennis which operate at this time, as well as that pesky round-ball game that refuses to die and continues to dominate grass-roots junior numbers.

The wash-up
In summary, I’d like to refer to a quote from a piece written by leading sports journalist, Rohan Connolly, on this matter.

He eloquently summarises why free agency is needed as he examined the juxtaposition the AFL finds itself in:

“Because you can’t on the one hand bang on about how elite is your competition on the one hand, while on the other treating those most responsible for putting on that show more as glorified serfs than salaried employees with rights to negotiate their labour.”

Although confronting to some traditionalists, increased free agency and movement of players is a healthy and normal part of any sporting code.

It is not new, and perhaps more importantly, provides a welcome solution to players seeking more game time, and to clubs seeking to refresh their playing lists.

The prohibition of a pure transfer system in AFL (and in the A-League between domestic top flight clubs) in order to preserve the integrity of the salary cap system needs to be supplemented by a complementary mechanism which allows players to have at least some way of shaping their own careers, rather than allowing club administrators to dictate their futures. 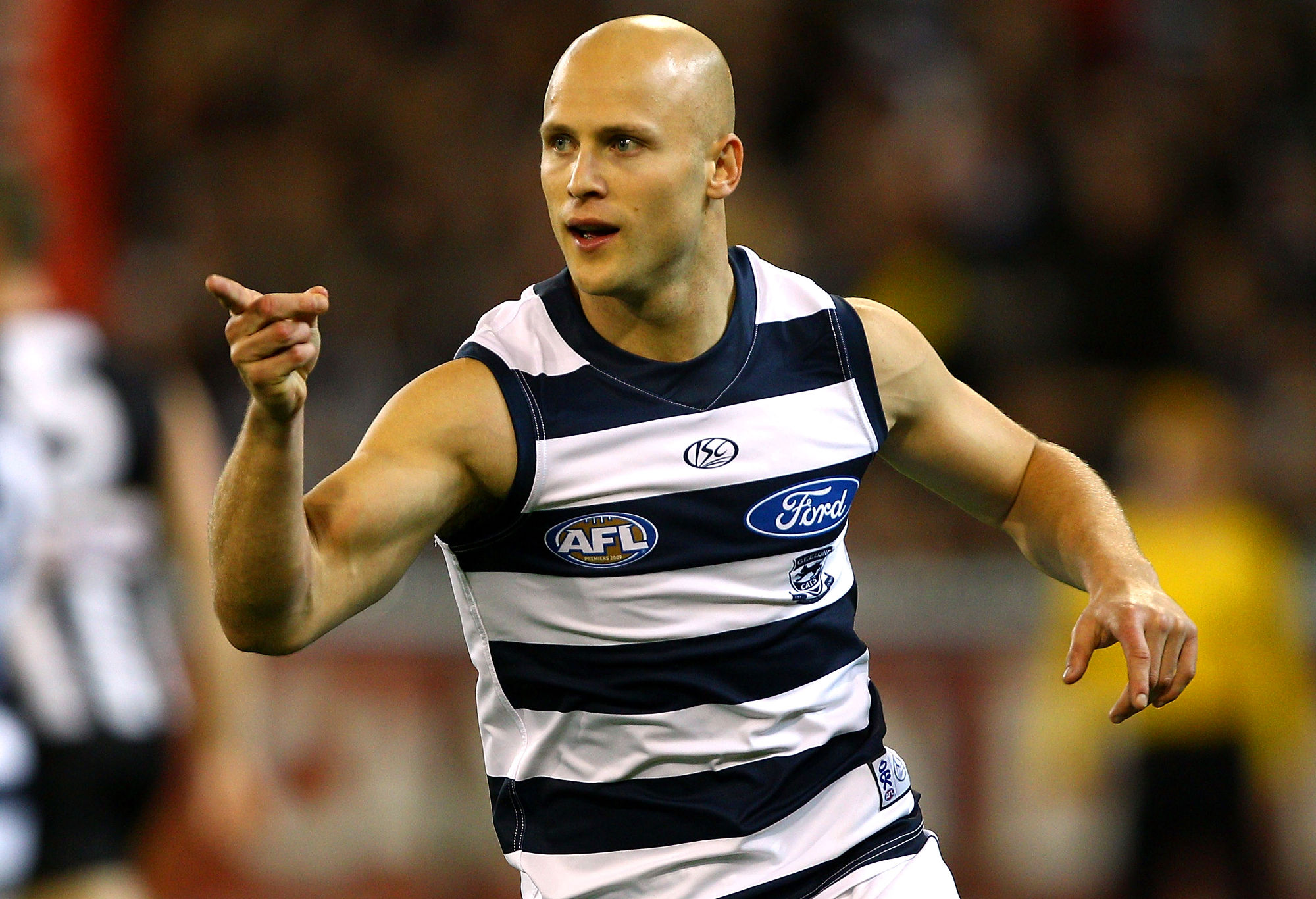 Gary Ablett moved back to the Cattery. (Photo by Mark Dadswell/Getty Images)

Perhaps it is the necessary evil we need in this country to convince all parties, especially players, agents and player unions, to agree to continue to publicly maintain their suspension of disbelief around the legality of preventing player movements amidst the threat of related restraint of trade arguments?

This is an issue which the AFL surely does not want to have its day in court – that is one elephant which it would like to remain firmly tied down, unable to move around freely and quite deliberately, kept in a darkened corner of the room with no prospect of a trade of any sort!

Geelong and the Western Bulldogs can play in front of a small AFL crowd after the Victorian government announced plans to ease COVID-19 restrictions. 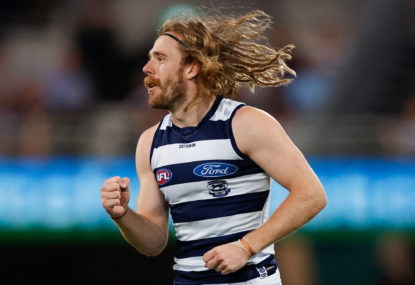 The stars align for the Cats in 2021: A premiership is coming

Between 1983 and 1991, Hawthorn played in eight grand finals, winning five.

The stars align for the Cats in 2021: A premiership is coming

The six most annoying things on a footy field

When you’re trying to teach a small child to do the right thing, it’s important not to encourage them to do the wrong thing – if you want kids to eat well, don’t give them junk food.

The six most annoying things on a footy field

Hawthorn have not had a lot to celebrate on the field so far this year as they appear to be in a rebuilding stage.

The AFL acted expeditiously against Gold Coast Suns utility Nick Holman for his chase down tackle from behind on Geelong’s Mitch Duncan as he was running down the wing attempting to send the ball long into the Cats’ forward line. 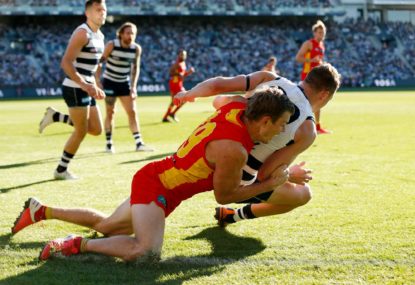