Do the Wallabies have reason to be cheerful from Bledisloe 3?

The legendary coach of the ‘Crimson Tide’ in Alabama, Paul ‘Bear’ Bryant, once memorably announced that “Offence sells tickets. Defence wins championships”. Since then, that phrase has become a cliché among supporters of nearly every sport on the planet.

The truth of the maxim is a bone of contention, especially for American sports fans who generally have more access to detailed statistical information than their counterparts from much younger professional sports in other parts of the globe.

Back in 2016, a data-based survey by Jon Wertheim and Sam Sommers suggested the difference between teams with better defences and better offences winning the important end-of-season games in the NFL, NBA and NHL was, at best, marginal.

This is probably no accident, as the great majority of rule changes in the congested jostle of the American sports market are designed to open up the game and increase scoring potential.

The story is similar in the top European football leagues, where attacking colossi like Barcelona and Real Madrid bestride the game on and off the field. The amount of defensive physical contact allowed in American sports, and in soccer, is in a constant state of recession.

NFL defenders cannot now ‘pop’ the receiver or running back without wrapping the arms; heaven help you if you take too many steps towards the quarterback after he’s released the ball. Breathe too hard on a professional footballer and he will hit the ground writhing in agony.

Rugby is going the same way, with the latest round of amendments to tackle height and interference at the breakdown all favouring the attacking side. More and more concessions are being made to the insatiable appetite of the TV broadcasting market. Maybe the true giants of sport like ‘Bear’ Bryant were living in a mythical era after all.

Serie A in Italy is thankfully restoring some sanity to a warped world. Probably the best club team in Europe right now is Juventus, who have won the Italian league title for the past seven years in a row. They have grizzled veterans like Giorgio Chiellini and Leonardo Bonucci in their back four, boasting a combined total of 182 Italian caps between them. One way or another, nothing gets past those two. 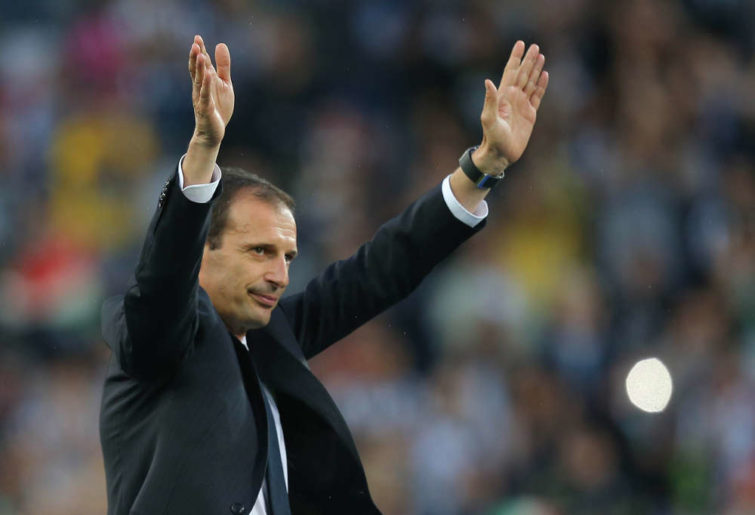 Last week, they beat Manchester United 1-0 away from home in the UEFA Champions League with some classical touches of ‘Catenaccio’ – a defence-first approach. Juventus have conceded only seven goals in ten Serie A games so far this season, and none at all in their three Champions League matches – despite two of those games being played away from home.

In Serie A, 14 league winners in the past 20 years have been the proud owners of the best defence, while only six have had the best attack. The stats show that preventing your opponent from scoring doesn’t just help ‘not losing’, it enables you to win more often – and in Italian football, the frequency of a win is, on average, 24 per cent higher than its expected probability when you don’t concede a goal.

In games in which teams did allow their opponents to score, the likelihood of a loss increased out of proportion – over 16 per cent more than the expected probability. That is a huge difference.

Defence is a litmus test of collective effort – concentration, discipline, the ability to exclude or survive errors. It sets the tone psychologically and reveals the mindset of a team in any sport. In a very concrete way, it establishes the pre-conditions of overall performance – “If they don’t score, you can’t lose,” as England defence coach Phil Larder used to say.

Australia could do with a touch of Catenaccio right now, after conceding 17 tries over their three matches against New Zealand in 2018. Last week’s article showed why it was becoming difficult for the Wallabies to find that collective focus and discipline, with players moving in and out of different positions continually.

In Yokohama, Australia conceded five tries and three of those came directly from scrums. It was not all bad, but was still much too inconsistent to worry the All Blacks.

On the positive side of the slate, some of the obvious issues are being addressed. Marika Koroibete got to stay on his own side of the field more often when chasing kicks: 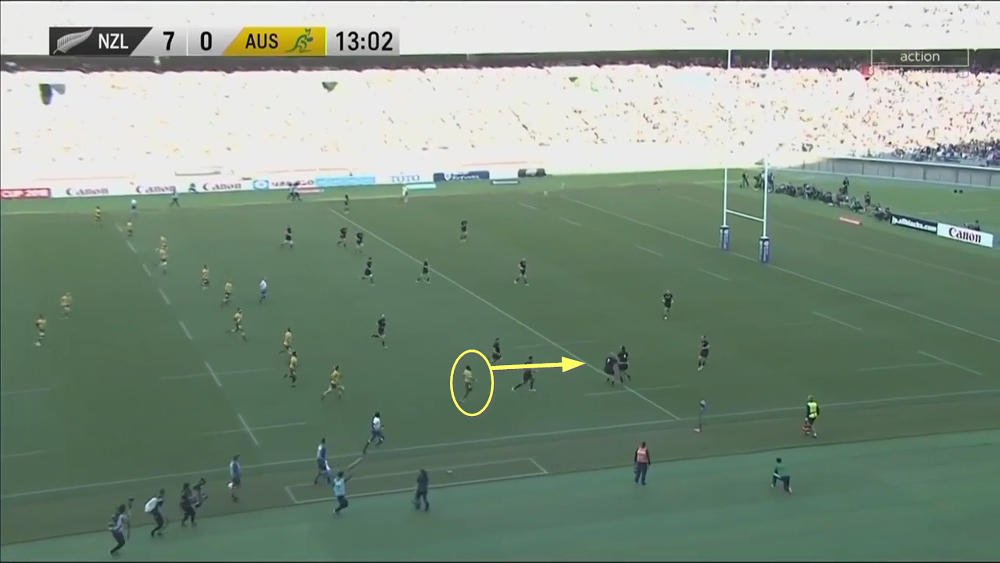 Throughout the game, Sefa Naivalu chased restarts down the right wing, with Koroibete chasing on the left. This helped reduce Koroibete’s workload and the imbalance caused in defensive or countering situations thereafter.

The principle of ‘musical chairs’ held good elsewhere. The selection of Israel Folau in the number 13 jersey suggested that he might be defending in that channel from set-piece. In the event, he remained in his usual role in the backfield, with Naivalu pushed inside to defend in tandem with Kurtley Beale: 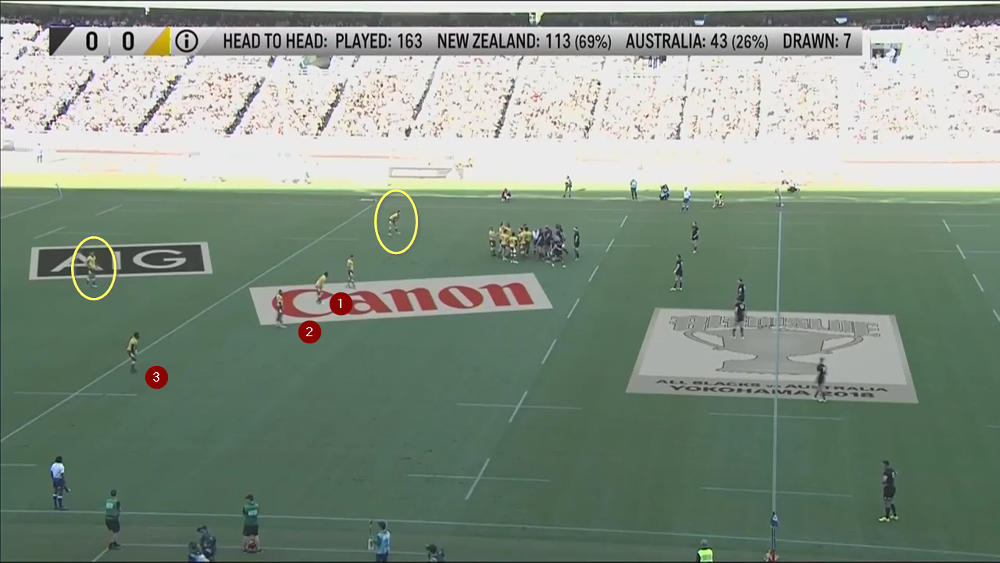 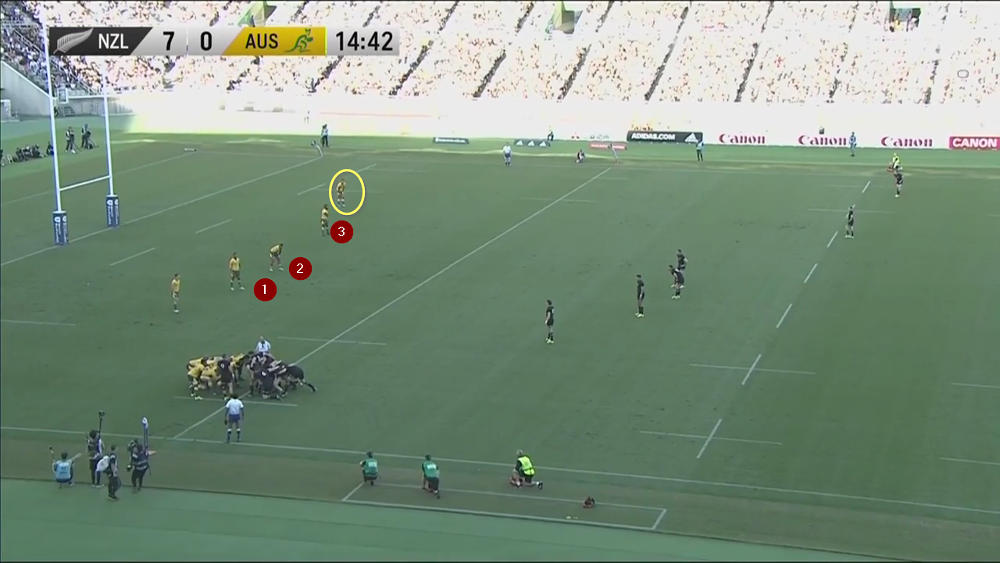 In the first example on the Wallaby left, Koroibete has shifted over to the right wing (‘3’) with Naivalu (‘2’) and Beale (‘1’) inside him. Folau is at fullback and Dane Haylett-Petty is on the blindside wing (both circled). On the other side of the field, Koroibete is again the openside wing, Folau is again playing fullback with Haylett-Petty out of shot directly behind the scrum.

The most glaring example of positional interchange occurred in the 72nd minute, with Tolu Latu on a yellow card: 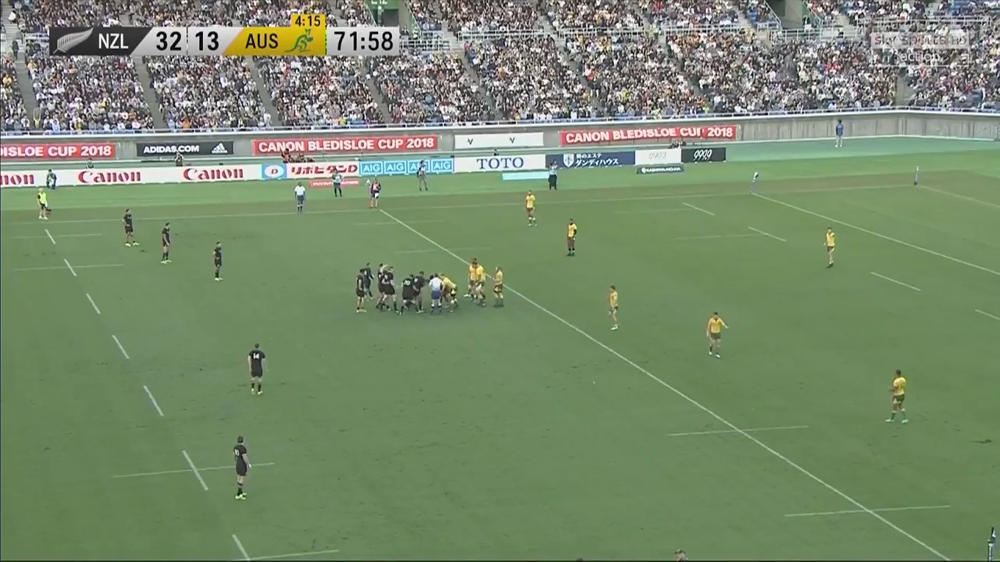 With one player off the field and two new replacements entering the fray just before, the Wallabies were looking understandably confused about who should go where. In the end, they lined up with Michael Hooper, Bernard Foley and Kurtley Beale out to their left, and Samu Kerevi and Folau on the right. Tom Banks was at fullback.

Despite the merry-go-round in backline defence, Australia showed they were capable of defending well from set-pieces on occasion:

With the All Blacks trying to make play off their second receiver, the Wallabies fire Beale out at Sonny Bill Williams on the first phase, and Hooper and David Pocock have closed all the gaps close to the ruck when they go back to Williams on the second.

In the second instance, Kerevi initially makes a solid tackle on Anton Lienert-Brown, and Williams is again under intense pressure from Beale when he goes to kick through on the second phase.

Even when Australia gave up the first try of the game to Liam Squire, they were in decent shape in terms of structure:

Koroibete and Haylett-Petty are on the left edge, with Naivalu, Beale and Folau protecting the right. The structure is sound, but it is compromised by Beale taking one mis-step upfield which means Squire can fade outside him into space. This was an individual error rather than a system breakdown.

Another individual error allowed New Zealand to score their second try from a close-range scrum (at 1:00 on the reel). Beauden Barrett is a constant threat ghosting to the blindside in these situations – remember this try he scored against Ireland in Dublin?

Barrett (coming into shot at 1:04) has to be taken by the defensive 9 (Will Genia) and the flanker on that side (Ned Hanigan) has to be responsible for the number 8 pick-up.

It is here the All Blacks inserted the kind of detail at which they are so expert. Hanigan would like to come forward on to Kieran Read, but his path is obstructed by TJ Perenara, who has not retired to the base of the scrum: 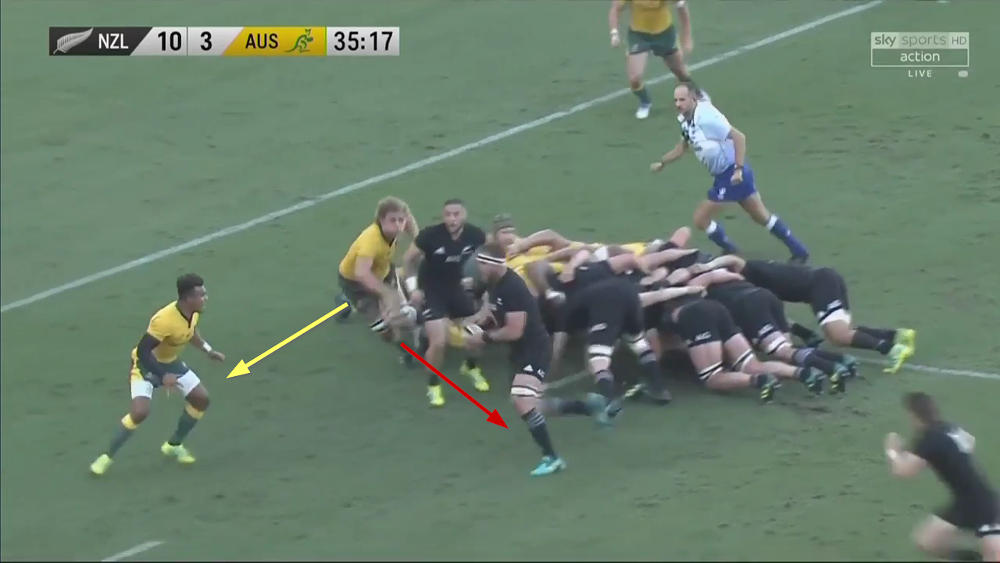 Hanigan’s first movement has to be upfield rather than sideways so close to his own goal-line. He has to fire up straight through Perenara and make the obstruction obvious to the referee, but he accepts the passive drifting line instead. That was never going to be enough to prevent Read from scoring.

The third All Black try was a well-rehearsed exploitation of another tendency noticed in last week’s article. Under pressure, the Australian back three all tend to run towards the openside, and that is exactly what they do at 2:40 on the reel.

New Zealand faked a move out in that direction before Barrett shifted the ball back to the blindside, and that gave Rieko Ioane all the room he needed to work past Genia and a recovering Folau. This was a great bit of tactical planning by the Kiwi coaching staff to make the most of a known weakness.

The final score (at 4:45) again highlighted the problems created by the constant shifting of positions on defence. Koroibete has again moved over to the right wing, with Folau defending on the blindside when Richie Mo’unga makes the initial tackle bust and offload. Folau missed Ben Smith one-on-one and that was the final nail in the coffin.

Summary
Although it might not seem like it, there were some reasons to cheerful in defeat for Wallaby supporters in Yokohama.

Samu Kerevi and Jack Dempsey both made impressive returns to the Test match arena after injury, and both will surely have much larger roles to play on the forthcoming trip to Europe. They will add starch in crucial positions. 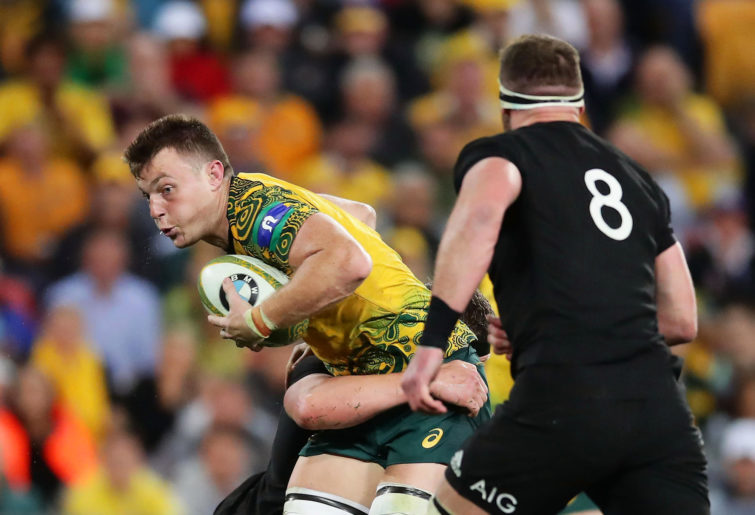 Jack Dempsey is a welcome addition for the Wallabies. (Photo: Matt King/Getty Images)

Some aspects of the Australian defence (like the kick-chase) were adjusted to advantage, and it will be interesting to see whether Sefa Naivalu is given more opportunities at outside centre for the Melbourne Rebels in 2019. He looks to have some potential in that spot.

But the ironclad collective will to refuse scoring opportunities for the opponent, which so epitomizes the play of Italian football teams over the years, is still lacking.

Both individual and system errors are still far too common, and it is impossible not to feel that many of those can be traced back to a lack of familiarity with position.

Michael Cheika should make finding ways to stop the opposition from scoring his main aim on tour. If they can’t score, your chances of winning rise well above the curve of expected probability.

Despite the best efforts of the marketing men and broadcasters to create a ‘more attractive spectacle’ via law changes, it is defence – more than anything else – that still wins championships.