The Adelaide winger added quality, but the real value in this match came from the atmosphere and intensity generated by both sides.

External factors like attendance are often ignored in tactical analysis, but the contribution of the packed, fervent Hindmarsh crowd shouldn’t be ignored – it made the game energetic and urgent, right from the start.

There were two tactical reasons for the chaotic nature of the game. Firstly, both teams focused on playing quick, early balls in behind the opposition defence, which was particularly obvious in the first half.

United have started this season with new signing Ben Halloran upfront. Not a natural 9, Halloran’s quality is his speed. He makes runs into the channels, constantly looking to get in behind.

In the first half, particularly, the home side looked to play killer passes for Halloran to receive behind Sydney’s back four. Halloran has not always been on the same wavelength as his teammates, who have made killer passes in an opposite direction to, or after, his runs, and there are question marks about his long-term suitability to that position – but he did add an obvious attacking outlet.

Steve Corica’s side were similarly keen to release their strikers in behind.

Adam le Fondre plays high, up against the opposition centre-backs, and tries to slip into space in behind. Early on, Alex Wilkinson attempted a few long diagonals over the top towards Le Fondre. Additionally, Alex Brosque played higher than usual in this game, so the Sky Blues basically attacked with a front two. 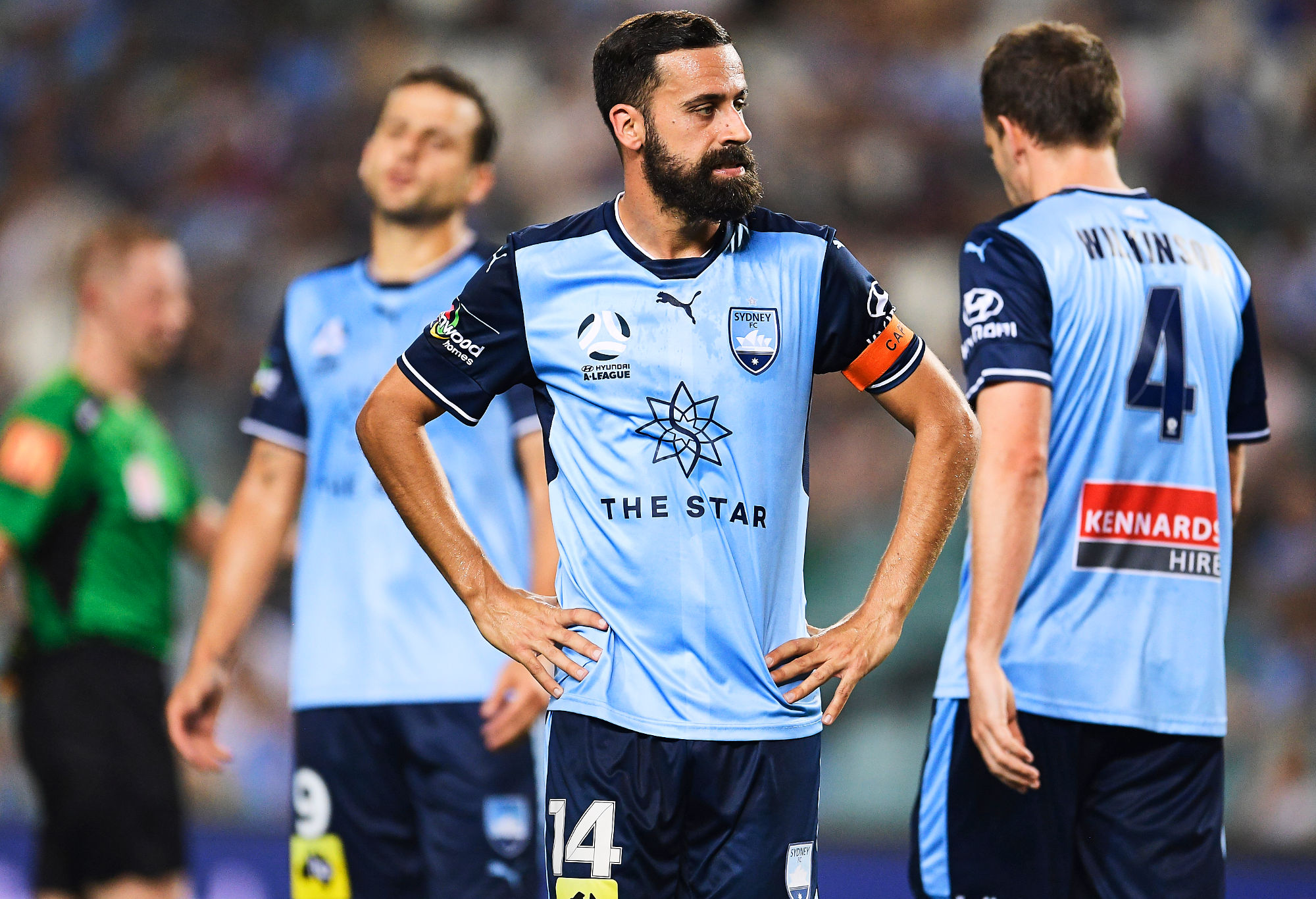 In doing so, they were able to pin back Adelaide’s back four, and open space for Rhyan Grant and Michael Zullo to get forward in wide areas. With Paolo Retre also making runs in behind from his right-wing position, there was lots of pace, forward runs and slightly overhit passes to make the game feel pleasingly open.

The other tactical reason for this was the pressing from either side. Both teams had a similar starting shape when defending high up the pitch – a 4-4-2.

The first task of the front two for both teams was to block passes into the opposition’s No.6s. When the ball was circulated from one side to the other, however, the nearest player in the first line of defence (the front two) would step forward and apply pressure to the centre-back in possession.

If, when they stepped forward to press, they were able to block off nearby forward passing lanes, this was a cue for the rest of the team to step forward and close the spaces in between the lines.

There were slight modifications in either team’s structure, but the overall intent of their pressing was similar.

The two tactical features discussed sometimes went hand-in-hand – the defending team would press high, and because they both wanted to play early balls in behind, the attacking team would be happy to play a longer pass forward. This, in fact, partly explains Sydney’s equaliser: they pressed high, forced Adelaide into a long ball, which is immediately returned forward, and Brosque ran from his high starting position to catch Jordan Elsey out and nip the ball away from Paul Izzo to win the penalty.

Where the game became particularly frenetic, though, was forward passes into midfield. In this zone, both teams had physical, mobile players who closed down their direct opponents ruthlessly.

These two tactical features contributed to the scrappy but enjoyable flow of the final. There was a large number of fouls as a result, and a lot of the game was also characterised by set pieces. Marco Kurz’s side showed interesting variation in their corner and free-kick delivery, causing Sydney problems at times, while Sydney posed their own threat – coming close to a second equaliser with a header off the post in extra time.

Overall, the match was actually quite even, and a ‘draw’ would have been a fair result.

Goodwin’s outstanding finishes were obviously the difference, and added the gloss to the game, but it was the no-holds-barred, high-tempo match that made this final memorable.