1993 was a big year for this kid from a speck-on-the-map town in the middle of New South Wales.

Fresh out of boarding school and a couple of months past my 18th birthday, I was enjoying life on university campus and living in the big smoke: Wagga Wagga.

As winter started to take hold, the magnificent discovery of a fully televised Ashes Tour to England was made: from the outset my mates and I resolved to watch every ball.

Of course, Wagga circa-1993 was in an Ashes Tour frenzy. Not content with just one Australian opener in Mark Taylor, the town was basically tripping over itself with excitement when new favourite son Michael Slater was named in the touring party.

Anything and everything Slater-related was newsworthy; the classic example being the front-page Daily Advertiser story of how then-girlfriend (and now ex-wife) Stephanie Blackett was going to be staying up all night watching the cricket just like we were going to. Though I don’t recall any mention of beer in Stephanie’s plans.

Stephanie worked at the local Grace Bros department store, and despite Wagga in 1993 already having a population well north of 50,000 people, everyone claimed to know her. Twelve months later I found myself working at the store alongside her brother; so my Kevin Bacon ranking was right up there.

When Slater got the nod ahead of Matthew Hayden – who’d just come off a million-run Sheffield Shield season for Queensland – for the first Test at Old Trafford, the town was buzzing. Then when he made that whirlwind 58 in his debut innings, Wagga was practically inhaling itself with its own hyperventilation.

Slater-mania was alive and well, and after he made that memorable helmet-kissing maiden century at Lord’s a fortnight later, the impact on cricket in town was such that you could buy any bat you wanted, as long as it was a Gray-Nicolls Powerspot.

Day 1 of the first Test was wonderful, with Taylor and Slater opening with a century stand. Taylor would go onto make 124, which by our recollection made him the first Australian batsman to make a ton using a Stuart Surridge bat in well over a decade. Was Kim Hughes the last? We were happy to go deep into the analysis, and this was the days before the internet took hold, meaning we were going old school… you know, actually having to remember it ourselves.

Australia finished the day 5-242, and we were as content with our decision to watch every ball of the tour as Graham Gooch must have already been regretting his decision to send the tourists in.

Day 2 was a Friday night, and when Australia lost 5-29 to be all out 289 by drinks, our commitment to the tour suffered its first blow. England started batting and Gooch and Michael Atherton went past the half-century opening stand without too much trouble. There was bigger trouble brewing in our block common room, though; we’d gone too hard on Day 1 and were rapidly running out of the amber fluid.

As Atherton departed and the last drop was found, we resolved to move down to the campus bar. Despite being in the depths of football season, Wagga was a cricket town this winter and we were confident the bar would have the Test on. Besides that, even if it didn’t, our mate Mick worked behind the bar and he’d look after us.

Mike Gatting had come to the wicket and hadn’t really got going, but it was clear that Allan Border needed to make a change in the attack. Merv Hughes had got Atherton, but Craig McDermott and Brendan Julian didn’t seem to be troubling the current and former England captains.

As the commentators started pondering the idea of spin and the cameras took their cue and started focusing on the now-slimmer, stepped-haircut and zinced-nose figure of young Victorian leggie Shane Warne, we figured it was time to adjourn to the bar.

At that point, Warne wasn’t really standing out as someone who would go on to add another 677 wickets to the 31 he’d taken in 11 Tests. His first real headline-grabbing haul was the 7-52 he took against the West Indies in Melbourne the Boxing Day Test before, though he took two four-fors touring New Zealand later that same summer. He had shed a few kegs, though, so we applauded his commitment to at least looking like a Test cricketer.

To the bar, then. Maybe Warne will have got his couple of looseners out of the way by the time we got there and got comfortable.

Now, the distance from our block to the bar wasn’t great. Probably not even four hundred metres, and pretty much a direct route, save for avoiding the old clotheslines, which were tough to see in full sunlight, never mind in the dark of night. Halfway en route, we could hear wild cheering from the bar. 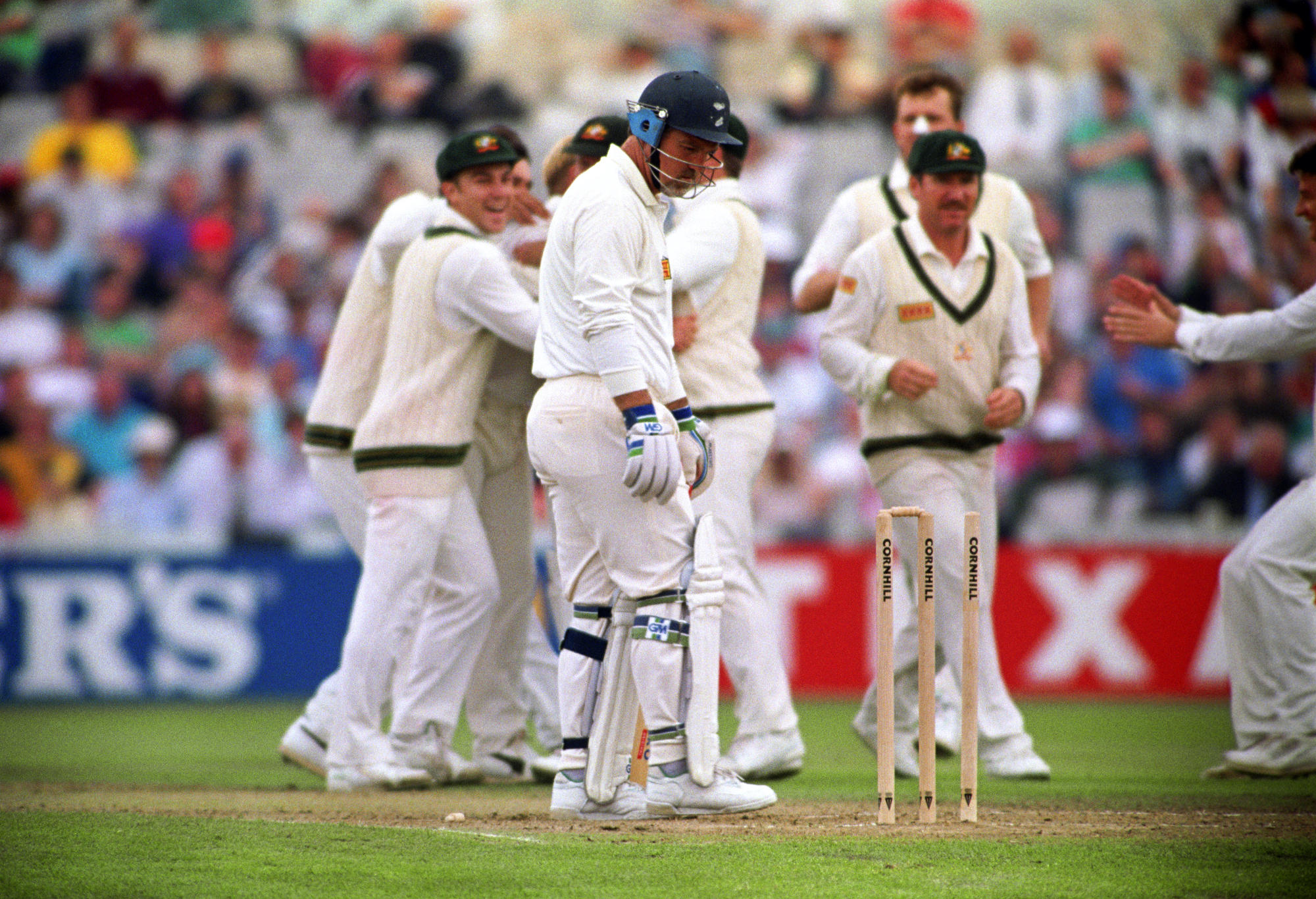 “How good was that?” Mick asks us as we walk in and give him the three fingers for some frothies.

“How good was what?

“Warne’s just bowled Gatting first ball. It must have turned two feet from outside leg!” he followed, unusually excitedly for a fast bowler was describing a spinner’s wicket.

“Yeah, good one mate,” we said, as we turned right into the face of a barrage of replays.

And then we saw it.

He did bowl Gatting first ball. It did turn back from two feet outside leg.

Blank looks were exchanged. ‘What on earth have we just missed?’ we screamed to each other without actually saying a word. The awkward silence around that moment took over and hasn’t really disappeared in the 25 years since it happened.

What we had just missed, of course, is now known as the Ball of the Century. It was labelled the Gatting Ball initially for several years henceforth, but a combination of hyperbole and nothing else topping it in the seven years that followed ensured the higher nomenclature was enshrined into folklore.

We missed it, though, and we’ve never spoken of it since.

Later in that same Test, Gooch would be given out handled the ball; only the fifth batsmen to dismissed by this method in Test Cricket history at the time, and only joined by Steve Waugh and Michael Vaughan since – coincidently within nine months of each other in 2001.

We called for it immediately and quite loudly in our common room, and we still remember it vividly to this day.

But that’s more of a cover for the fact that we know we missed the ‘other’ memorable moment from that incredible Test.

Foxtel are giving away a 12-month Platinum HD subscription so you won’t have to miss out on any cricket this summer. To enter the competition, simply leave a comment telling us what great Australian cricket moment you missed and why. Terms and conditions can be found here.