The AFL has today revealed the 2019 fixture, with Melbourne and Essendon rewarded for their encouraging offseasons in the form of plenty of primetime matches.

The Bombers are set to feature in the marquee timeslot at least five times in 2019, while the Demons will play three Friday night clashes and five Saturday night games.

But it’s Collingwood who’ll rule the prime time roost in 2019, with the reigning runners-up set to feature in 11 matches of that variety next season.

Of controversy, however, will be the presence of nine Thursday night clashes – including one to begin the first five rounds of the season. Thursday night fixtures have traditionally provided strong TV ratings, but have proved unpopular with fans wishing to physically attend matches.

Fans will be treated to a grand final rematch in Round 3, when Collingwood hosts West Coast on a Saturday night, with the second fixture taking place in Perth on the Friday night of Ronud 17.

The Eagles travel to Brisbane to play their first match as reigning premiers, but will get to raise the flag a week later against the Giants.

After the fixture release was delayed by one day after clubs were reportedly unhappy with a number of elements, it appears many got their wishes with today’s release.

The Lions will find themselves on national television at least four times in 2019, with most of those matches at home, whereas Carlton will still feature in at least seven free-to-air matches in what’s sure to raise contention.

Geelong fans will be happy they’ve been granted nine home games at GMHBA Stadium again, with MCG ‘home’ games against Essendon and Hawthorn the only aberrations.

Sydney, however, have had their request for more day home games largely rejected, with the Swans pencilled in for only two afternoon matches and one twilight game at the SCG. 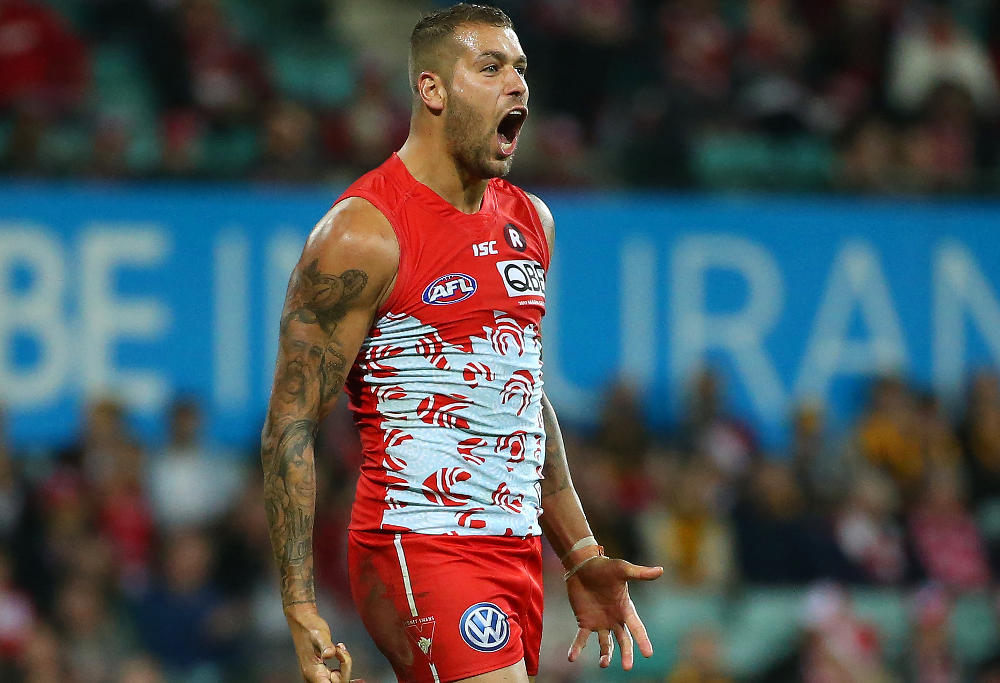 It will be more night games for Lance Franklin and the Swans this year. (AAP Image/David Moir)

The Western Bulldogs will take two games to Ballarat this season, facing off against the Lions in Round 8 and the Crows in Round 23, while St Kilda’s one-game move to Shanghai has been locked in for Round 11.

There’ll be plenty of football in Tasmania this season too, with the good news being no team will play two away matches in the island state. North Melbourne will host the Swans, Giants, Saints and Demons at Hobart’s Blundstone Arena, while the Hawks will play the Blues, Power, Dockers and Lions in their Launceston matches.

Adelaide, who were hoping they wouldn’t be punished too heavily for a poor 2018, will still feature heavily in primetime, playing ten matches across Thursday, Friday and Saturday nights – although a Friday night Southern Showdown won’t be happening.

Their crosstown rivals, Port Adelaide, will be looking forward to Round 10, where they’ll get to meet-up with ex-superstar Chad Wingard in Launceston. Wingard, however, won’t have to deal with a return trip to the Adelaide Oval this year.

Other intriguing reunions include Dayne Beams’ return to The Gabba on Thursday night in Round 5, Lachie Neale returning to Optus Stadium on Sunday afternoon in Round 10 and Dan Hannebery finally venturing back to the SCG in Round 23.

Crows fans will have to wait until Round 19 to have a crack at Mitch McGovern, however, and they’ll have to do so at Marvel Stadium, with the Blues only playing the Power in South Australia next year.

The Suns will meet up with both of their ex-captains at home this year, with Steven May’s Demons venturing up to Metricon in Round 8, and Tom Lynch bringing the Tigers to town in Round 16. Over at Spotless, the reunion tour kicks off in Round 1 when Dylan Shiel comes back with the Bombers, and they’ll see Rory Lobb in purple for the first time in Round 5.