The Wrap: The Wallabies and other rugby matters explained in vinyl

While readers (mostly) resisted the temptation to align this to Michael Cheika and the Wallabies, it was enough to send me scurrying off into my own vinyl collection to examine possibilities.

Not only was this a good excuse to give some great old records a spin – many of which hadn’t seen daylight in years – it soon became clear that there was a tale to be told through these albums.

So with apologies to those readers born too late to recognise all of the artists, and the rider that I was restricted to my vinyl collection only (no CDs, cassettes or digital music), here’s a look at how the music world of the 70s and 80s intersects with today’s rugby world.

Firstly, to the low hanging fruit. This is a tough time to be an Australian rugby supporter. The 2018 Wallabies ledger stands at 3-7, Super Rugby wins remain few and far between and internal politicking dominates the domestic landscape.

Wallabies fans might thus turn to Tom Petty and the Heartbreakers’ 1987 album, ‘Let Me Up I’ve Had Enough’, Pete Townshend’s solo foray, ‘Empty Glass’, Jackson Browne’s ‘Running On Empty’, or The Saints’ ‘All Fools Day’.

Or perhaps BB King’s, ‘There Must Be A Better World Somewhere’, says it all?

What about Steely Dan’s 1972 recording, ‘Can’t Buy A Thrill’, which remains in my all-time top ten albums, and which features a rare and remarkable electric sitar solo by Denny Dias, on the single, ‘Do It Again’?

Dias’ hands are so nimble and dexterous they provide a stark contrast to Isaac Rodda fumbling efforts in last week’s Bledisloe Cup match in Yokohama. If only Rodda had ‘Sticky Fingers’ – for my money the best of many great Rolling Stones albums. 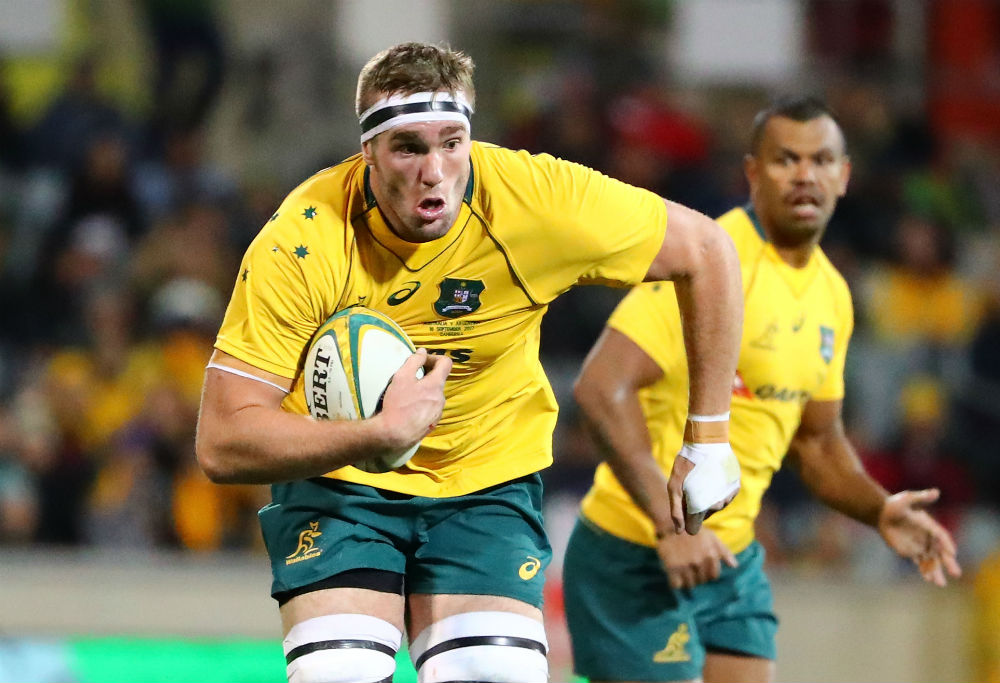 Izack Rodda of the Wallabies runs with the ball during The Rugby Championship. (Photo by Scott Barbour/Getty Images)

What about The Cure’s ‘Seventeen Seconds’? That was about as long as it took for Aphiwa Dyantyi to put the Wallabies to the sword in Bloemfontein.

In more ways than one, 70s progressive super-group Yes were well ahead of time, their albums ‘Fragile’ and ‘Close To The Edge’ nailing the psyche of Wallabies’ fans. If the music sounds a little dated today, one never tires of the gate-fold cover art by Roger Dean.

Plenty of criticism has been directed at Wallabies assistant coach, Nathan Grey’s overly convoluted defensive system. Whilst I suspect The Bangles’, ‘All Over The Place’, was purchased more for the band member pictures than the music, it nevertheless seems apt.

A mental picture of Grey explaining the mechanics of his system to befuddled players recalls Marianne Faithfull’s, ‘Broken English’, Marvin Gaye’s classic, ‘What’s Goin’ On?’, and Talking Heads’ ‘Speaking In Tongues’. This 1983 album also contained the single, ‘Burning Down The House’, a catch-cry for many disaffected West Australian rugby fans.

At least under-fire Rugby Australia chairman, Cameron Clyne, can look to his departing counterpart at Cricket Australia, David Peever, and slip him a copy of Supertramp’s ‘Crisis? What Crisis?’

Fans frustrated at the Wallabies’ inability to learn from past mistakes will relate to The Doobie Brothers’ 1974 album, ‘What Were Once Vices Are Now Habits’. Which, from an opponent’s perspective, translates into ‘The Gift’, from The Jam. 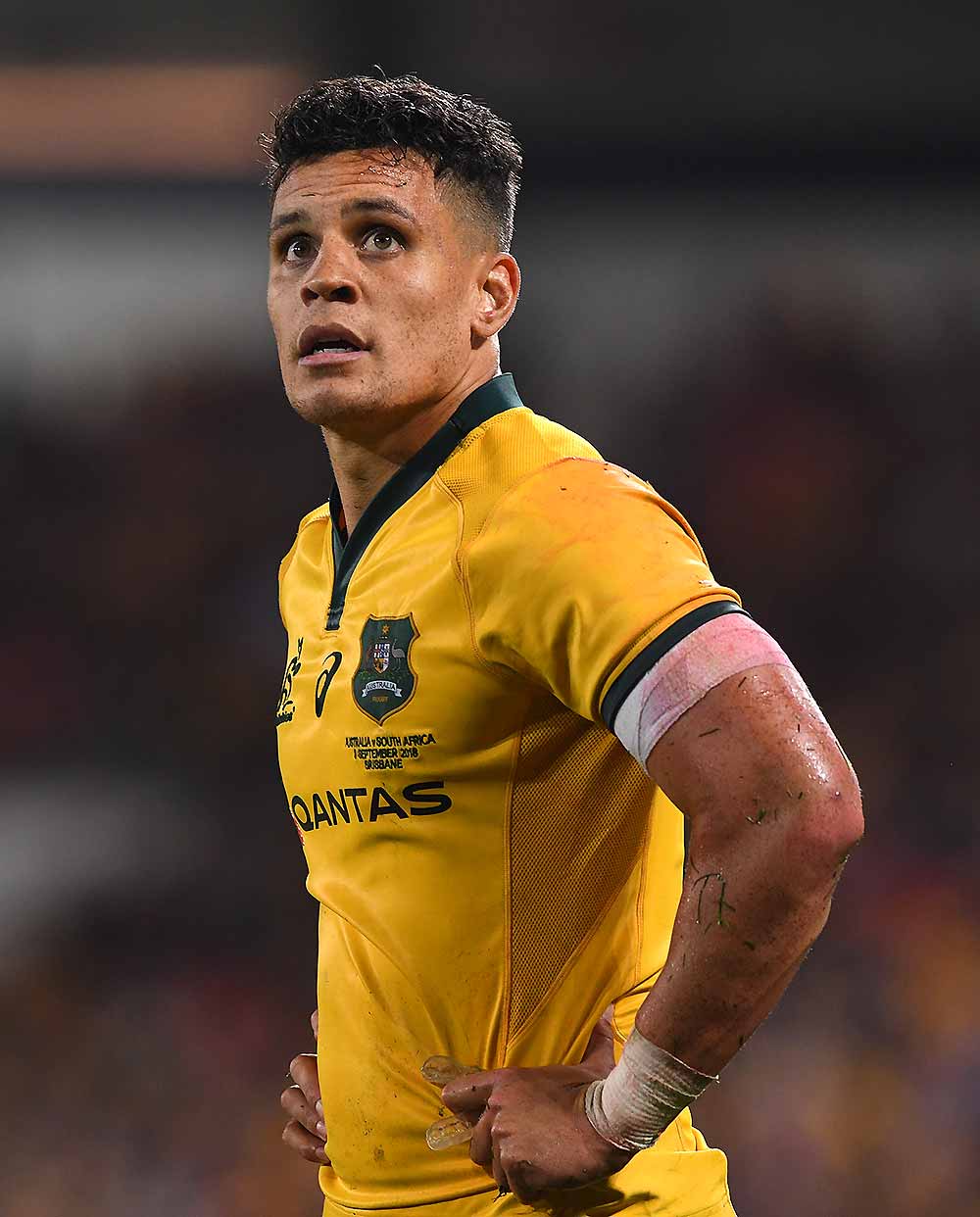 In an exhaustive back-catalogue studded with gems, Bob Dylan’s 1989 offering ‘Oh Mercy’ reads like it was written for the Wallabies, containing tracks like ‘Everything Is Broken’, ‘Where Teardrops Fall’, ‘What Good Am I?’ and ‘Disease Of Conceit’. It also raises the spectre of All Blacks’ coach Steve Hansen surveying the on-field warm-ups in, ‘Man In The Long Black Coat’.

Dylan closes the album by offering exasperated fans a glimmer of hope with, ‘Shooting Star’. And with Hansen offering public support to Michael Cheika last week, the hand of kinship is extended further by Dave Dobbyn, the only real challenger to Neil Finn as New Zealand’s premier songwriter who, in the guise of DD Smash, offers up ‘The Optimist’.

As for Cheika himself, with things looking terminal at 31-7 down at half-time against Argentina, and an appointment with Rugby Australia’s leadership locked in for his return, Little Feat’s, ‘Feats Don’t Fail Me Now’, throws up the chaotic track, ‘Wait ‘Til The Shit Hits The Fan’.

As it happened, the Wallabies found their mojo and breezed through the second half, allowing Cheika to remind CEO Raelene Castle of Graham Parker And The Rumour’s, ‘Stick To Me’, and Elvis Costello’s underrated 1981 album, ‘Trust’.

For 40 minutes at least, in the course of a remarkable 38-point comeback, Cheika was Elton John’s ‘Captain Fantastic’ and Michael Hooper his ‘Brown Dirt Cowboy’. 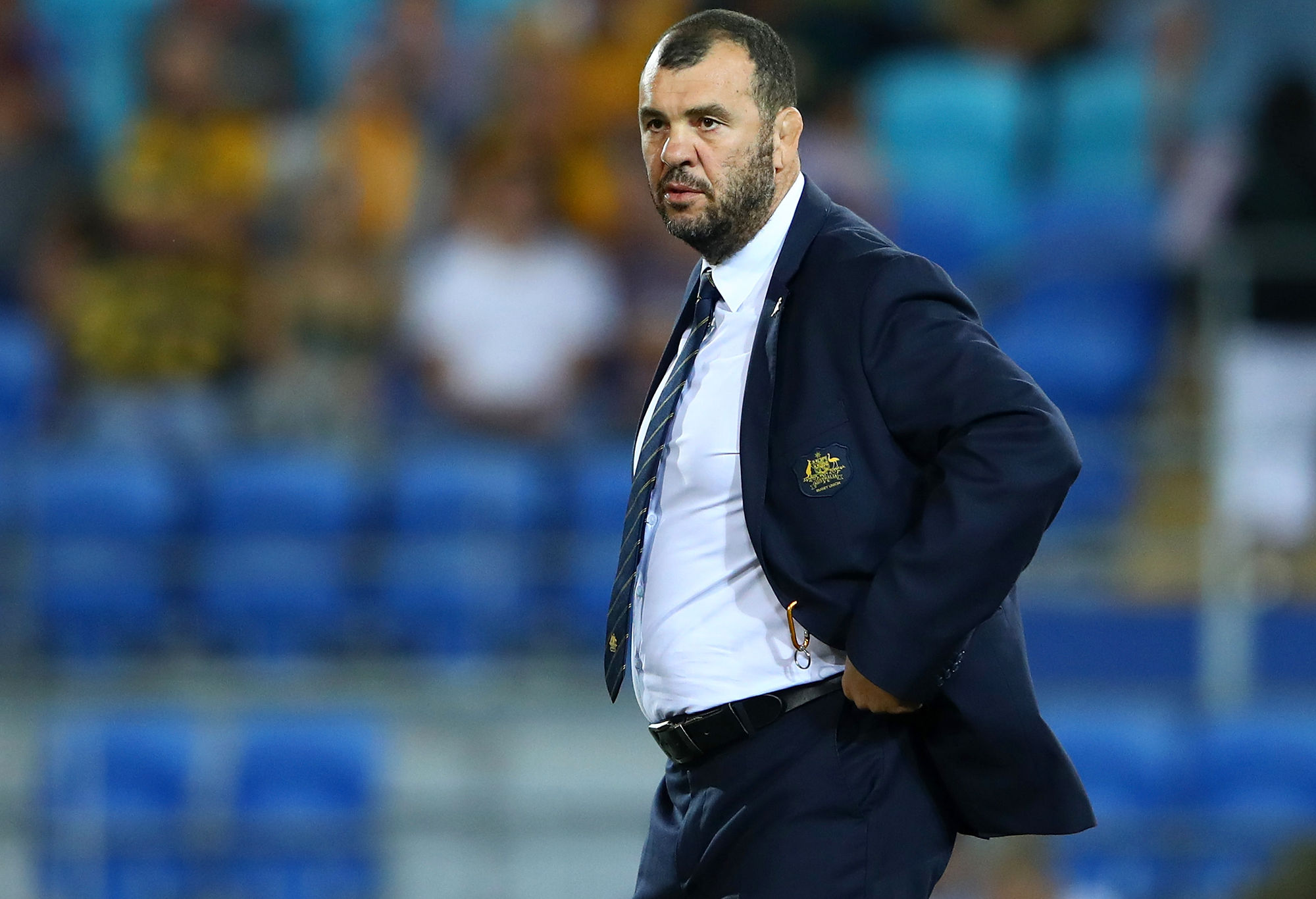 Linda Rondstat’s early 1980’s dalliance with the Nelson Riddle Orchestra produced a couple of albums, ‘Lush Life’ and ‘What’s New’. The latter’s opening track on side two (remember when you had to get up and turn the record over?) is ‘I Don’t Stand A Ghost Of A Chance With You’, Quade Cooper’s lament to Reds’ coach Brad Thorn.

Having arranged new digs in Melbourne, Cooper hails originally from Tokoroa, only a short drive from Te Awamutu, birthplace of the aforementioned Finn. Crowded House’s self-titled album suggests that the gathering of large numbers of present and past Wallabies will result in some intense training sessions and much competitive jockeying for a spot in the Rebels’ starting line-up next year.

It isn’t all about the Wallabies of course. Were Scott Barrett and Sonny-Bill Williams singing Creedence Clearwater Revival’s ‘Looking out My Back Door’, from the album Cosmo’s Factory, as their slick second-man play sent Liam Squire past Kurtley Beale for last weeks’ opening try?

Boz Scaggs’ ‘Silk Degrees’ not only formed an important part of the soundtrack to my early University years, but the album title beautifully describes the manner in which Beauden Barrett and Rieko Ioane glided down the left-hand blind-side in Yokohama.

And while revered songwriter John Hiatt continues to pump out great albums, it is his 1982 recording ‘All Of A Sudden’ that tells the story of ‘Big Karl’ Tu’inukuafe’s meteoric rise from non-Super Rugby contracted bouncer, to first-choice All Black front rower.

One of 2018’s major talking points came during Ireland’s visit to Australia in June. Echo And The Bunnymen’s, ‘Heaven Up Here’ and The Pogues’, ‘If I Should Fall From Grace With God’ perfectly depicts the aerial coming together of Peter O’Mahoney and Israel Folau during the deciding third Test.

Steve Winwood’s classic, ‘Arc of A Diver’ might, in previous years, have applied to the Puma’s Nicolas Sanchez. But having played wonderfully this season, Sanchez is a reformed man, Bob Marley’s ‘Redemption Song’, off the album ‘Uprising’, his new theme song.

The 1970’s was the heyday of the double live album, Deep Purple’s ‘Made In Japan’ a prime example. With the ‘Brave Blossoms’ thrilling a large crowd by scoring five tries against New Zealand, portents are good ahead of next years’ World Cup.

Scoring ten tries themselves, a number of young All Blacks hinted at productive Test careers ahead of them, none better than winger George Bridge, channeling both of Joe Jackson’s 1979 albums, ‘Look Sharp’ and, ‘I’m The Man’.

It was The Clash’s, ‘London Calling’ as the November Test window opened with a thriller at Twickenham. Another loss might have had critics accusing Eddie Jones of ‘Selling England By The Pound’ (Genesis, 1973), but with South Africa kicking too much ball away in the attacking half, and Malcom Marx misplacing his lineout jumpers, it came up Joni Mitchell’s gem, ‘For The Roses’, 12-11 for the home side.

The game ended in controversy; Owen Farrell’s right shoulder providing referee Angus Gardner with a ‘Borderline’ (Ry Cooder, 1980) decision as to whether or not to provide Handre Pollard with a chance to steal the win. Most pundits saw it differently, but Gardner gave the tackle Bonnie Raitt’s, ‘Green Light’, and with it, an opportunity for fans who have been bemoaning rugby going ‘soft’ to argue the opposite.

Like all sports in a rapidly changing world, rugby faces an uncertain future. Player welfare is paid lip service while clubs and national unions are pitched in battle for commercial and political control of the game. 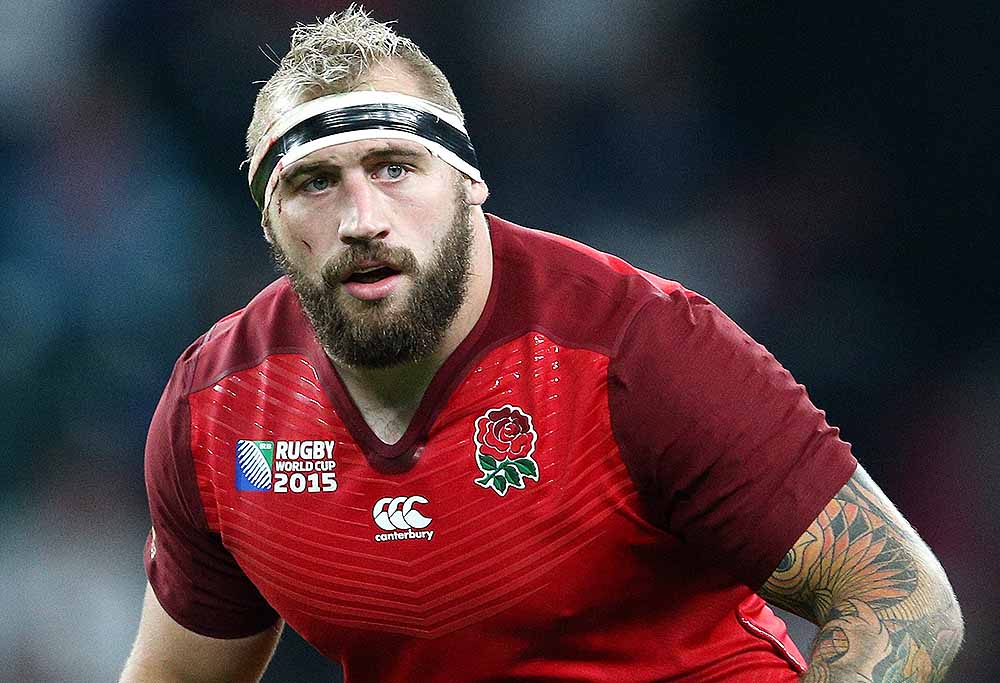 But week on week, the game offers up enormous enjoyment for participants and fans at all points of the globe. Despite the imperfections and frustrations, our love for the game keeps us coming back for more.

As such, Bruce Springsteen built a whole album around his divorce from his first wife, Julianne Phillips, but he could just as easily have been referring to rugby when he sang on the title track of his brilliant 1987 recording, ‘Tunnel of Love’.

It ought to be easy, ought to be simple enough
Man meets woman and they fall in love
But the house is haunted and the ride gets rough
And you’ve got to learn to live with what you can’t rise above
If you want to ride on down in through this tunnel of love