2018 was a year of disappointment for Cowboys fans, but the season began with much anticipation and excitement.

The team had just contested a grand final. Co-captains Matt Scott and Johnathan Thurston were returning from extended injuries. The talismanic Thurston would partner Michael Morgan in the halves to form a Kangaroos combination.

Recruit Jordan MacLean was joining a formidable pack including Tongan test star Jason Taumalolo and Origin backrowers Gavin Cooper and Coen Hess. Every league expert and journalist predicted the team to finish in the top four and once again, battle for the premiership trophy on the last day of September.

Yet, things did not pan out this way. By the middle of the season, the Cowboy’s finals hopes were dashed. It took a drubbing of the Parramatta Eels in the penultimate round of the season, in Thurston’s final home game, to stave off the undesirable honour of ‘winning’ the wooden spoon.

Things started off well. Kyle Feldt grabbed a hat-trick, including a try on the buzzer, to down the Melbourne Storm in the pre-season testimonial match at Suncorp stadium. In Round 1 the Cowboys defeated the Sharks in an expectedly rusty performance.

Then the famous ‘goal post’ try-saving tackle occurred in Brisbane during Round 2. Several members of the club, including Morgan and head coach Paul Green, have cheekily referred to this moment as the point their campaign was derailed.

The team went on to lose four more games in succession. I remember watching the Panthers match played at 1300 Smiles stadium on Holy Thursday. The chocolate soldiers got out to a 16-0 lead on the back of hard running, poor defence and some brilliance from James Maloney.

It was then I thought we would be in for a long season. This was because, in previous seasons, I would back the boys to run down such a deficit. But I turned the television off at half time.

When I ventured onto the patio, swatting away moths and cracking a XXXX, one of my friends asked me:

“Why did you stop watching?”

I replied that the team wasn’t playing well enough to claw back such a lead. The Panthers went on to win the game 33-14.

Lots of people, including myself, wondered what the cause of the Cowboys’ fall from grace was. Some pointed to the lack of speed in the outside backs. Forwards getting injured at unfortunate times.

A loss of form to key players. Thurston had gone on a year too long. To be honest, it was probably a contribution of all these factors.

A few critics noted Paul Green’s inability, or unwillingness, to alter the structure of the team. The line “they’re running the same plays from 2015” got thrown around a lot. 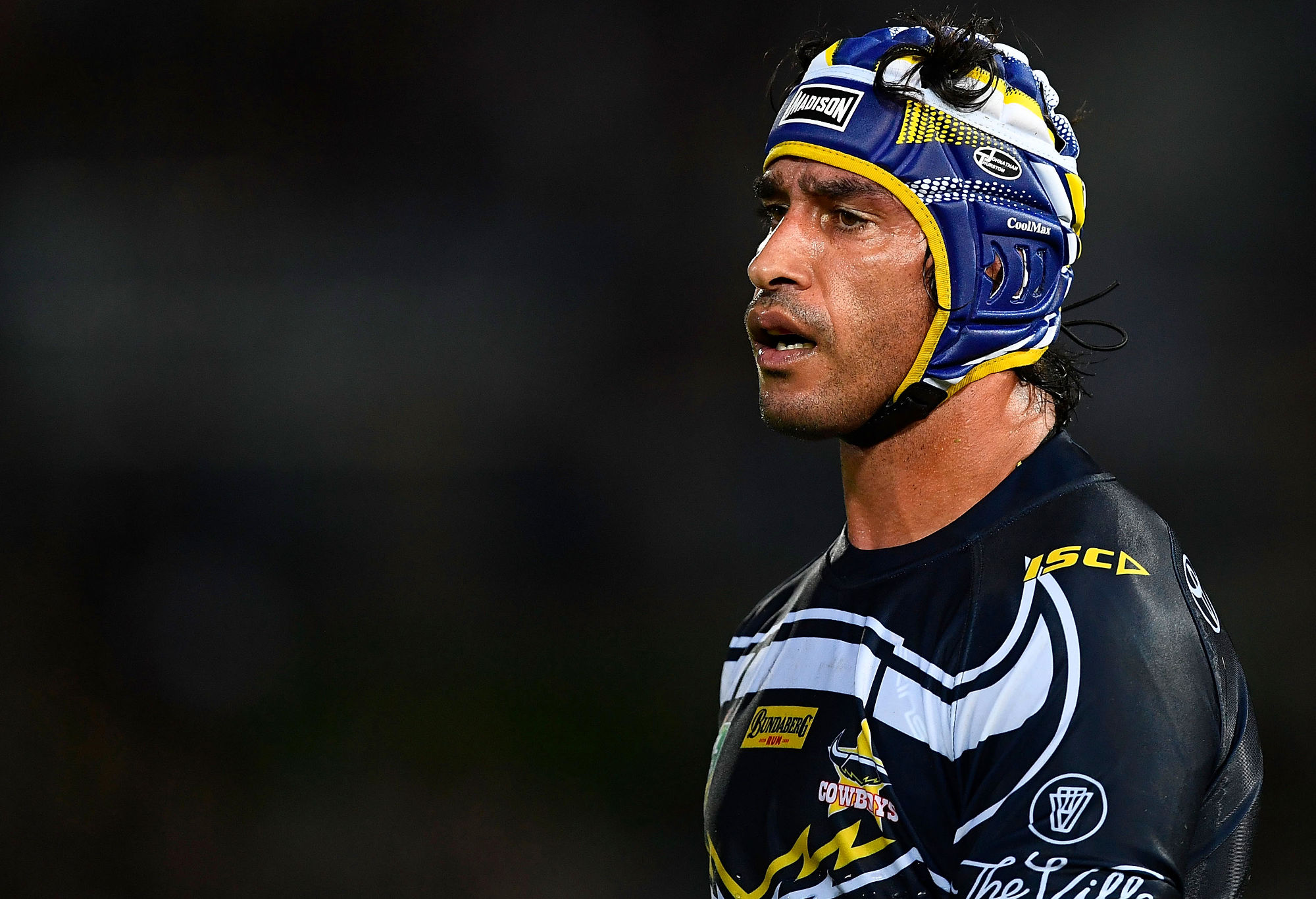 The Cowboys had a terrible 2018. (Photo by Ian Hitchcock/Getty Images)

Melbourne use the same plays, year in year out. And they still yield points. Opposition teams know what to expect when they suit up against Cameron Smith and Billy Slater. Yet, most of the time opposition teams are unable to stop them.

This is because the Storm execute their plays with speed and precision. Speed creates doubt in opposition defensive lines, and you only need one person to make a mistake for an opportunity to pop up somewhere.

During 2018, the problem wasn’t that the Cowboys were running the same plays, but they were running them slowly. It’s no coincidence that during the final few rounds of the season, when the Cowboys started shifting the ball quickly, that they looked so much more threatening.

Speedsters Ben Hampton and Gideon Gela-Mosby came in looking for opportunities and capitalised on a few.

In the Round 13 game the Cowboys ran the same plays, but slowly. Thing looked clunky, passes were mistimed.

Perhaps the team lacked energy. Either way, it’s not the coach who instructs the players to execute the plays slowly.

So this begs the question, how does the team return to executing them quickly with regularity? The answer is: bust out the chequebook.

The Cowboys board and management must be commended on many tough decisions they have made over the past several years. At the end of 2010, the club ordered a cleanout, saying goodbye to loyal servants Steve Southern and Carl Webb, amongst others.

Brought in were the likes of Tariq and Ashton Sims, Brent Tate, Dallas Johnson, Gavin Cooper, Glenn Hall and Antonio Winterstein. Club hero Matthew Bowen was sadly not re-signed 2013 to make way for Lachlan Coote. A few of these players won a premiership with the club in 2015. All of them succeeded in changing the culture of the team. 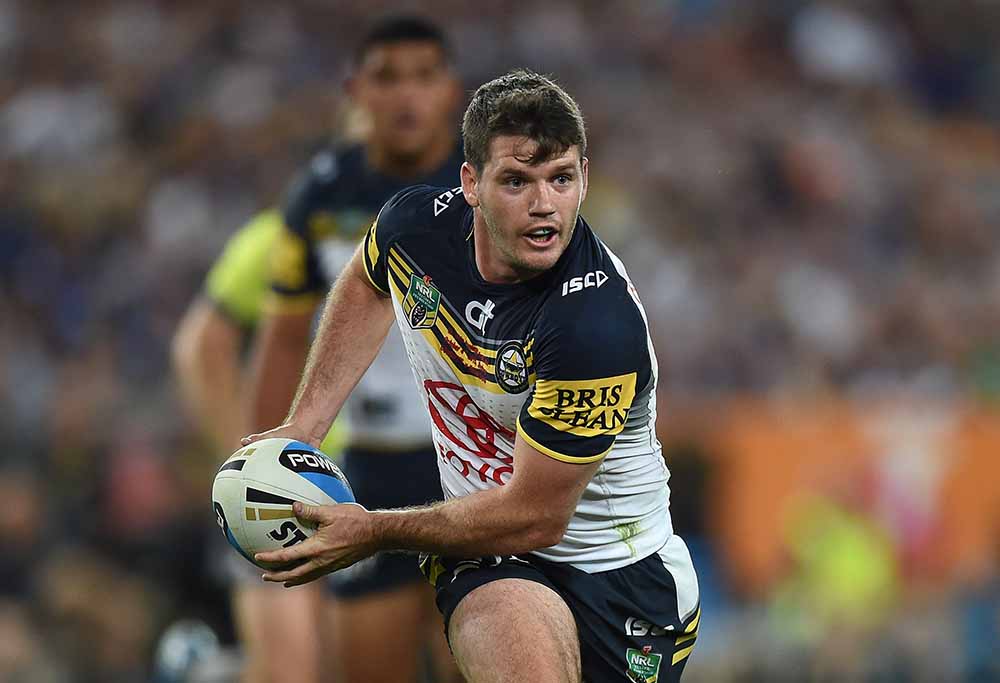 Lachlan Coote during his time with the Cowboys. (AAP Image/Paul Miller)

The Cowboys transformed from battlers to finals regulars in the space of a few seasons, culminating in the grand final victory. The point being, in recent times the management have made tough, but correct decisions necessary to keep the team successful on and off the field. The same is occurring over this off-season.

Several players have been released from the squad. Tom Opacic, Nene MacDonald, Dan Russell, Kurt Baptiste and Ben Barba have signed up. All these men, especially MacDonald and Barba, are crucial additions to the roster.

The Cowboys now possess genuine strike and attacking weapons on both flanks. MacDonald is like Corey Oates, except he’s about $400,000 less expensive. He and Feldt will get their sets off to a good start.

Playing like extra forwards, they’ll truck the pill into the line, make some yardage post contact, get to the grass and produce a quick play the ball. This will generate some ruck speed for the next set.

Granville can then either scoot or throw a short ball to Matt Scott. Once Scott has a run, MacLean goes in. Then Taumalolo. Then Hess.

At this point Granville will have one of three players to find the best option to finish the set (Morgan, Clifford or Barba). Any one of them would be more than capable of putting the cherry on the last tackle option. I can see it now.

Providing the starting props have more luck with injuries next season, as depth isn’t great in this department, making territory shouldn’t be as much of an issue. With younger players in the backline and an electric Ben Barba chiming in, there is cause to be optimistic about 2019.

While the team will be inconsistent with several new faces in the spine, when things gel, the Cowboys will be a potent attacking threat. I am eagerly awaiting the beginning of 2019.