Given that the festive season is almost upon us, which happens to coincide with the middle of the AFL off-season, I thought I would take the opportunity to review a couple of footy books over the next week or so.

Book: Footballistics: How the Data Analytics Revolution Is Uncovering Footy’s Hidden Truths
Author: James Coventry (and a team of Footy’s sharpest thinkers)
What: Canvasses the rise and rise of data analytics, number crunching and statistics in footy.

Of particular interest to Roarers is the involvement of our very own Ryan Buckland, which I only discovered upon commencing the book review in earnest.

The sleeve describes Australian football as “the most data-rich sport on Earth”. Whether that is true or not, we’ve come a long way from the early 1980s, which was the Melbourne papers first foray into publishing statistics.

I remember well these early days. It started with the kicks, handballs, marks and goals of each player on each team for each match.

From there, bit by bit, we saw the growth in the stats provided:

Footballistics covers much of this development, but also attempts to answer a series of eternal questions, always relying on the stats. These endeavours are enjoyable to read, even if, at times, the answer is not clear-cut, and/or it becomes smothered in statistics which, shall we say, are not necessarily bedtime reading.

That aside, there were some areas of statistical analysis which I found fascinating. Often these related to the sorts of discussions we have all been involved in, such as the age profile of successful teams, and/or their match experience. Some of my favourite moments in the book follow.

A Model for Shot Difficulty
Goal-kicking accuracy over the ages is one of those questions which comes up frequently. A whole range of statistics are provided on this, season by season, club by club, ground by ground, and even those players who are the most accurate.

Over the long run, there is no era that stands out more than others in terms of goal kicking accuracy (except for the earliest years of footy), although there are some general observations we can make, for example:
– Hawthorn’s more successful eras had a higher degree of accuracy than their less successful eras; and
– as far as grounds go in the modern era, as expected, Docklands has the highest rate of accuracy of all grounds.

Quite rightly, the authors talk at length at the complexity in analysing the accuracy of players because as we know, not all shots at goal are equivalent. We need to assess distance, angle, ground conditions, player fatigue and injury, etc. That’s as far as set shots go, on top of that we have to factor in shots on the run, under pressure, snaps, soccers off the ground, and on it goes.

The authors have developed a model which takes into account all of these factors. A set shot from 30 metres, slightly off centre, has an average success rate of 79 per cent. A snap from just inside the boundary, just inside 50m, has an 18 per cent success rate.

We then are able to compare the expected goals (the Xg) of any particular player, with the goals he actually scored, to know whether he is below or above par.

This idea can be extended to cover whole teams, so that for any given season, one can calculate whether teams lost games for not making their collective Xg, or whether teams over-achieved by surpassing their Xg. 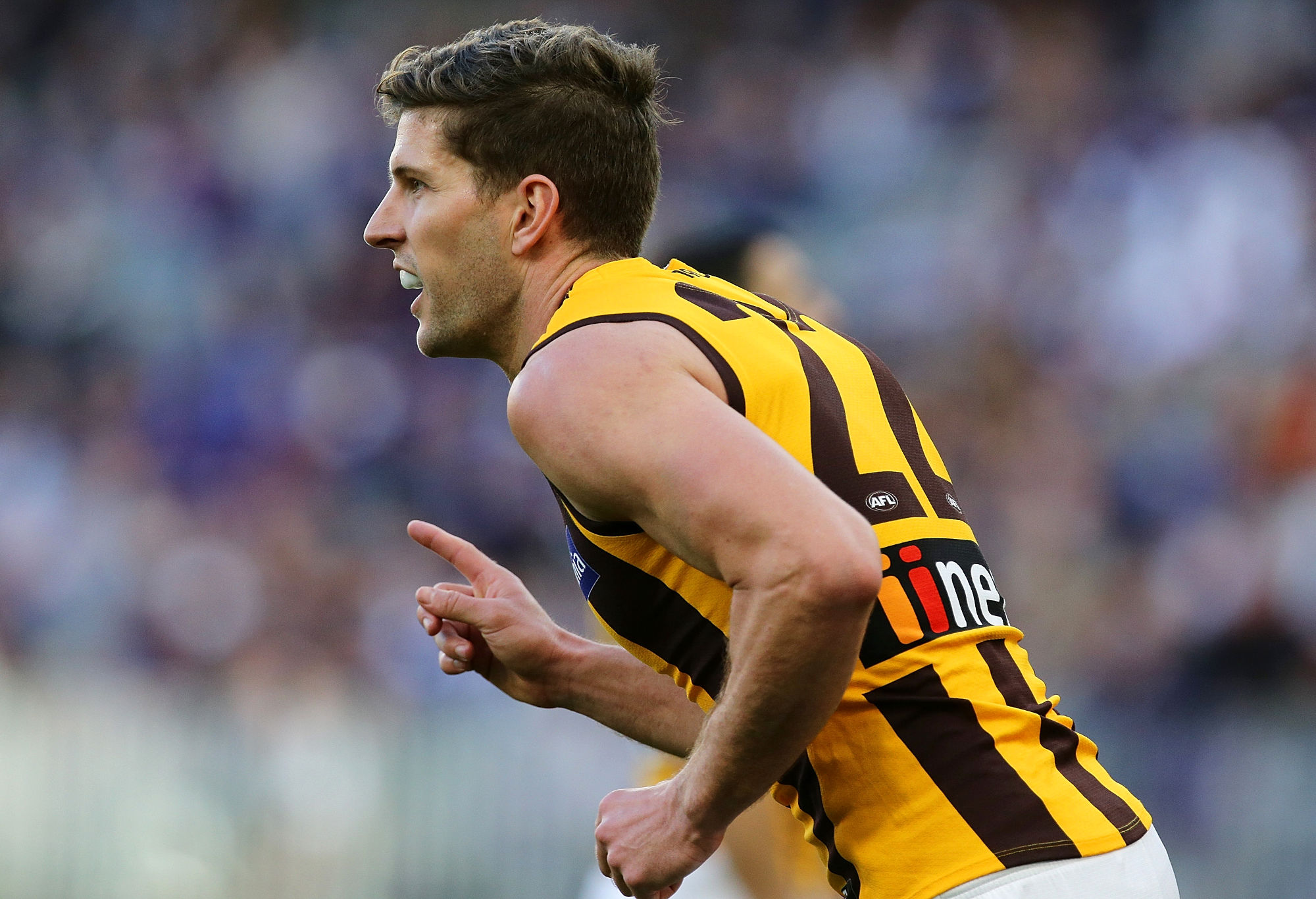 Luke Breust of the Hawks. (Photo by Will Russell/AFL Media/Getty Images)

Score Involvements
This section of the book looks at one of the new areas of statistical analysis, and comes up with a way of summarising a club’s game plan, for example:

The centrepiece forward – used in 2017 by Sydney, West Coast and Gold Coast. Probably the closest thing we have to traditional footy with the ball being directed to a key forward (or two). In the case of the Swans, Buddy Franklin was involved in 36 per cent of the Swans’ scores.

The false forward line – used in 2017 by the Bulldogs, Fremantle and Collingwood. In this case, a lower percentage of the score is channelled through those who ostensibly are playing forward. In the case of Bulldogs, more goals came from their midfield than their forwards.

The midfield monster – used by Richmond, Geelong and Brisbane (to a lesser extent Fremantle and Gold Coast). This differentiates between scoring involvements and score ‘links’, with the latter, we are talking about players having multiple involvements in any score. In Richmond’s case, the 2017 premier, no player typified this more than Dustin Martin.

The launching backmen – used by Carlton, Brisbane, Adelaide and West Coast. In each case, teams had at least two defenders involved in over 18% of scores. Note that the 2018 premier is found here, a reminder of how their grand final winning goal was set up!

Player Approximate Value (PAV)
Yes, the name of this system is meant to remind you of former Fremantle great, Matthew Pavlich. This idea is influenced by baseball, but the twist is that it’s not a valuation of the individual player himself, but rather a valuation of his worth to the team.

The interesting aspect about this measure is that it allows comparisons across seasons. In 2016, Patrick Dangerfield scored a PAV of 32.0, compared to Jimmy Stynes’ score from his 1991 season of 31.4.

Across a complete career, Robert Harvey has the highest PAV of 352.9.

From there, we can use this measurement to assess drafts. For example, the Bulldogs had a famed draft in 1999 which yielded Robert Murphy, Daniel Giansiracusa and Ryan Hargraves, amongst others. The club ended up with an actual PAV of 772.4 compared to the expected PAV of 263.3.

Geelong’s draft of 2001 holds top position, and you’d think most of this class were involved in a premiership or two later in the decade.

Shared Experience
I found this chapter to be the most interesting because it’s a subject which comes up regularly: is there a precise formula for predicting grand final success (average age, average games, average finals played, etc?

The authors have come up with a means of measuring team cohesion, which basically comprises the number of games any combination of players has played together. 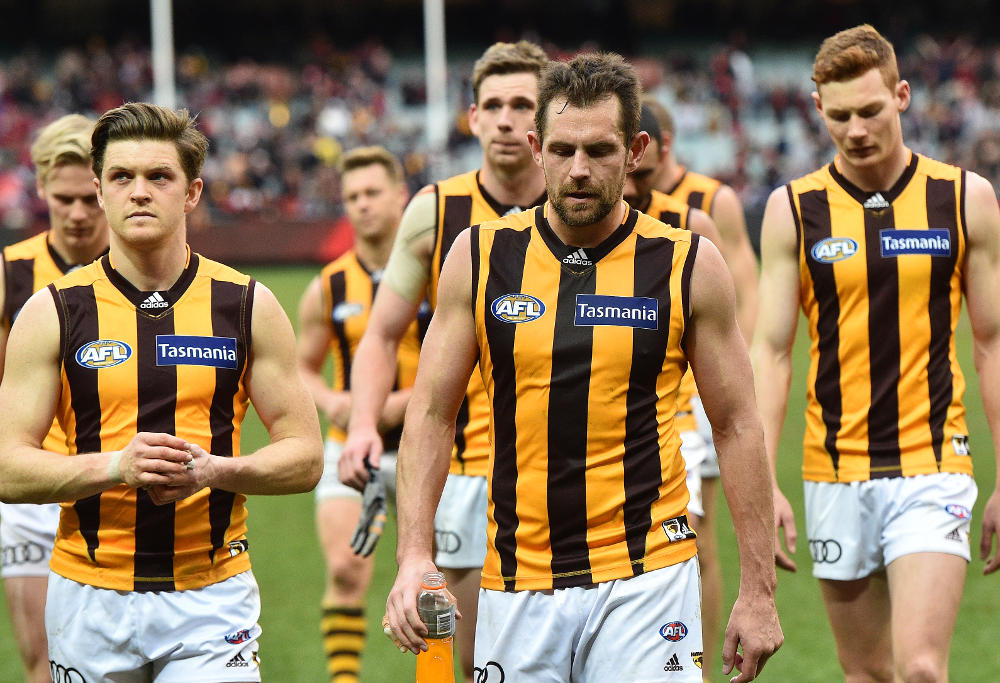 A simple enough concept, although for any one of us to measure the shared experience of 22 players at any given moment is no easy matter.

Fortunately, the authors have done the hard work. The team with the greatest shared experience in the modern era is the Geelong team of 2010 with 22,667 shared matches, they are also in second place for the 2009 team. Brisbane’s 2004 team is in third spot.

Interesting that two of the top three actually lost their grand finals. It just goes to show that you can only ever have so much of a good thing, and that the law of diminishing returns means that at some point, it catches up with you.

A team of 28 year olds is good, four years on, and despite the increase in shared experience, most probably they are not quite as good (helps explain Clarko’s willingness to move on the three Hawthorn greats mentioned above).

I close this review with some of the key questions put to the reader on the sleeve (which are covered in detail within the book). I’ll leave it to you to seek out the answers.

Do umpires really favour the home side?

Is Geelong the true master of the draft?

Are Victorians the most passionate fans?