Twickenham showdown: Why the boot will be on the other foot at scrum time

How do you build the best scrum in the world?

Eddie Jones had his own ideas before the start of the 2018 Six Nations. He invited the well-weathered Georgia forwards over to a training session with England at Latymer Upper School in West London, all expenses paid.

“We want to have the best scrum in the world and they’re the biggest, ugliest, strongest scrum pack in the world,” he said.

During the first couple of years of Jones’ tenure as England coach, England were scrappy, aggressive and pugnacious at the set-piece. They didn’t back down to anyone and more often than not, they persuaded referees to share their view of who was dominating the scrums.

On the 2016 tour of Australia, Dan Cole was heralded, Scott Sio was demonised, England won. That was straightforward cause-and-effect early in the Eddie Jones era.

2016 was a happy tour for Eddie Jones and England. (Photo by Tim Anger)

It also agreed readily with the traditional stereotype of English rugby, populated by brutish set-piece gargoyles and cunning scrum ogres.

As New Zealand sports columnist Michael Laws famously remarked back 2003, “They’re battle-hardened Vikings… raw-boned, cauliflower-eared monoliths that intimidated and unsettled. When they ran on to the field it was like watching a tribe of white orcs on steroids.”

England won the World Cup for the first and only time in their history a couple of months later.

In contrast, Australia’s scrummaging during the Eddie Jones era (2001-2005) was a story of steady deterioration and a lack of intellectual investment in one of the fundamental platforms of the game.

In the 2003 World Cup final, the three Australian props were Al Baxter, Bill Young and Matt Dunning. Despite their obvious limitations, both Dunning and Baxter were still there (along with Jones) when white orc Andrew Sheridan unmanned the Wallaby scrum at Twickenham in November 2005. Baxter was yellow-carded for repeatedly collapsing under pressure, and when Dunning moved over to replace him he had to be stretchered off after one scrum against the England strongman.

The writing was on the wall for Eddie Jones. He called up a complete unknown, ‘clubbie’ Dave Fitter, for the final match of the 2005 tour against Wales, and I can still hear the phone ringing after the Wallaby team had been announced.

The excited voice on the other end was the head of analytical services for the Wales squad, Alun Carter.

“Who the heck is David Fitter?” said Alun. I had to confess my ignorance.

Footage was found, a plan was hastily implemented, and in the game proper, it came to fruition. Australia collapsed a succession of scrums in the shadow of their own posts and conceded a penalty try which enabled us to claim our first win over the Wallabies since 1987. David Fitter disappeared from the international stage as quickly as he had arrived.

After the tour was over, Eddie Jones resigned as Australian coach, to be replaced by a forwards-minded coach in John ‘Knuckles’ Connolly.

But the damage had been done, and it was still costing the Wallabies as late as the 2007 World Cup, in a quarter-final against England and their bête noir, Sheridan. That kind of damage in the foundation of your rugby culture can take years to repair.

The banner headline announced by Eddie Jones at the start of England’s 2018 campaign has long been trodden underfoot like old newspaper, and the fair has moved on. Veteran 82-cap tight-head prop Dan Cole was ‘rested’ for the summer tour to South Africa, and he has been excluded from the squad for the end of year tour matches.

With Harlequins’ Kyle Sinckler starting at instead of Cole, the English forwards conceded their first pushover try in living memory in the second Test at Bloemfontein:

Sinckler pops up, England retreat, and it is a penalty try at the crossroads moment in the series.

England were therefore already going backwards in the scrum when Lions’ loosehead Mako Vunipola picked up an injury just before the autumn series, and Joe Marler made his significant decision to retire from international rugby but continue playing for his club. The four props selected against South Africa on Saturday boasted a mere 26 caps between them.

England’s opponents next Saturday, New Zealand, have meanwhile been steadily moving in the opposite direction. When Graham Henry was appointed head coach after the 2003 World Cup, he said the following:

“We have to get back to the scrum being a contest rather than a mechanism to restart the game. There’s a huge forward contest in European club rugby and we don’t get the same in Super 12. I think that is wrong and we need to change that.

“We have to put a lot of time into our ability to be stable and accurate at set pieces to set a platform for the talent.”

That is the real dog-work New Zealand undertook in the years following, repairing the damage done to the foundations of their game with the aid of influential scrum visionaries like Mike Cron, who spread his gospel of biomechanical virtues far beyond the boundaries of the All Blacks and into the grassroots.

At the 2003 World Cup, the All Blacks were pushing 1200 kilos on the scrum machine. Before the 2005 Tests against the British and Irish Lions, they were shifting in excess of 2000, and Carl Hayman was taking care of Andrew Sheridan – both in the Maori tour match and on the weekend after the Baxter/Dunning demolition later that year.

Maybe it is pure coincidence that the two coaches who presided over the deterioration of the scrummage in their own countries are now the main coaches for England. Whatever the truth of the matter, it is now the All Blacks who will be coming to Twickenham next Saturday to scrum England off the paddock – not the other way around.

They will be greatly encouraged by the performance of the Springboks in that area last Saturday. The battleground was set at the first scrum in the tenth minute: 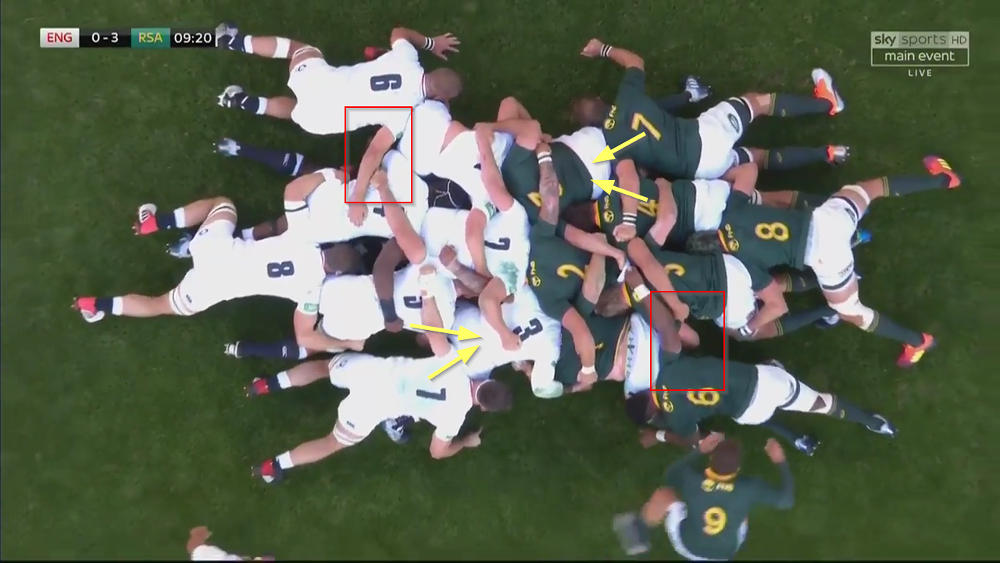 Angles and the ability to manipulate them are everything in a modern scrum, and there are plenty in this overhead shot. Support is noticeably tauter – more close-knit – on the tighthead side than it is on the loose, where the angle of both number 1s results in a pronounced gap between the lock and flanker.

It is clear from this first scrum where most of the South African effort will be directed. They have picked out the man cementing the England scrum with his experience – both the Bokke number 3 Frans Malherbe and number 2 Malcolm Marx are targeting hooker and co-captain Dylan Hartley in a vice-like squeeze.

South Africa reaped their first reward from this tactic near the half-hour mark, with the pressure from Marx and Malherbe forcing Hartley up and out of the top of the scrum on an England feed:

This how the same scrum looked from ‘spider-cam’ overhead:

With Hartley out, there is little either of the smaller England props can do to stop their opponents from moving the scrum forwards and around the corner to win the penalty.

Only a couple of minutes later, England suffered the indignity of being pushed off their own ball:

The pressure on Hartley is so severe that he is forced to release his bind on Sinckler as the right-hand side of the England scrum frays and comes apart.

Both this scrum and the initial screenshot show how much size England loosehead Alec Hepburn is giving away to his ‘widebody’ opposite number Malherbe. Neither of the looseheads from Exeter Chiefs (Hepburn and Ben Moon) tip the scales at more than 110 kilos, and both struggled to contain the bulk and power of men weighing 15-20 kilos more.

It also remains a mystery why the tidier technician of the two (Moon) entered the game from the bench, rather than starting it as he does down at Sandy Park.

It was a surprise that South Africa did not try to promote one or both sides of the scrum on their own feed. On the one occasion they did, they won an easy penalty that would have won the game if Handre Pollard had succeeded off the tee:

The scrum is won as a battle of inches: as soon as Thomas du Toit and Wilco Louw win the first half dozen, the England back-row is out of the contest, and it is suddenly eight men pushing against five: 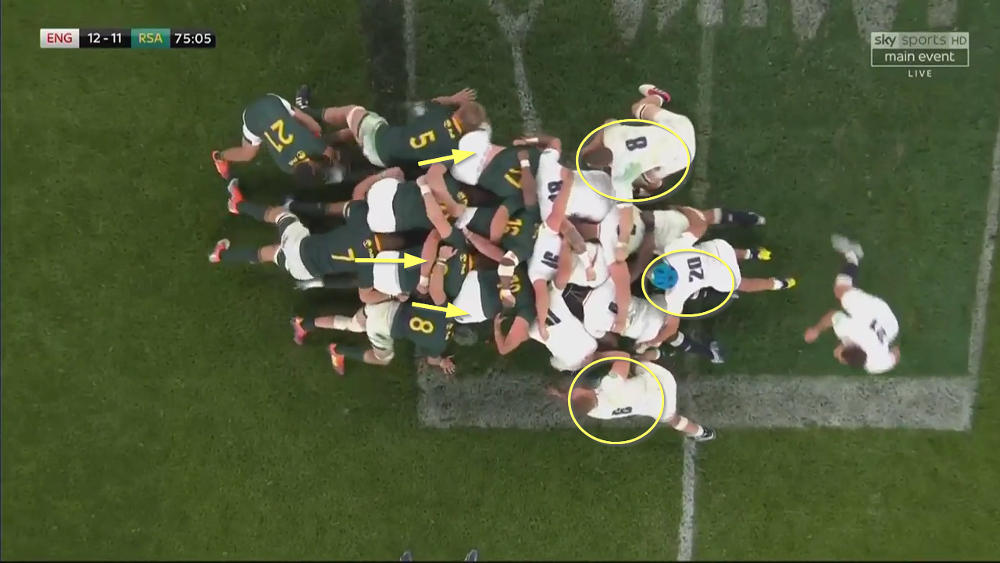 At other times, the England scrum managed to hold on by the skin of their teeth, with the ball delivered quickly via channel one: 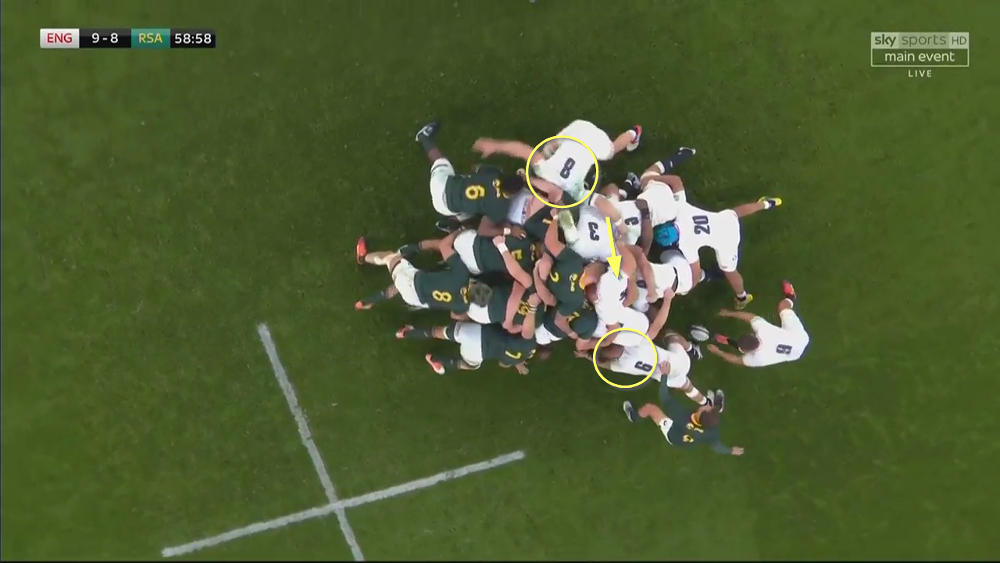 The flankers have been split away from the main effort and Kyle Sinckler has been driven in sideways at 90 degrees by the pressure, but the ball is coming out between the number 8 and the near-side flanker, and that saves the day.

Summary
It is not all bad news. England did indeed win the (legitimate) scrum penalty which led to their decisive goal against South Africa in the 71st minute.

That was, however, the exception to the rule. England’s undersized props often struggled to contain their opposite numbers and the pressure came raining down on England co-captain Dylan Hartley in the middle of their front row.

Yes, first choices and solid back-ups like Mako Vunipola and Matt Mullan are unavailable because of injury. But the absences of Dan Cole, and maybe even Joe Marler, are harder for England supporters to explain.

Cole is probably the only English-qualified player who would rank in the top half dozen tightheads in the Premiership. Vincent Koch and Juan Figallo at Saracens, Tomas Francis at Exeter, Ben Franks at Northampton, John Afoa at Bristol and now Ruan Dreyer at Gloucester could all reasonably expect to start the game ahead of the two England incumbents.

In the current circumstances, the idea that ‘we want to build the best scrum in the world’ is fake news. England is simply not building world dominators at prop any more. The distinct whiff of déjà vu, and Eddie Jones’ association with a decade-long decline of scrummaging standards in Australia is hard to ignore.

After 2003, New Zealand made an honest re-assessment of their attitude to scrummaging and the fundamentals of the set-piece, and they are still benefiting from it.

They have now progressed to the stage where they will be expecting to attack in an aspect of the game where they have traditionally had to defend at the ‘home of rugby’ – both with their starters and off the bench. The question is not whether they will get an advantage at scrum time next Saturday, but how big it will be.

Andrew Sheridan may have retired four years ago, but the hulking ghost of the England titan still stalks a Randwick man. England will not be forgiven either by their supporters or the media for any portion of a humiliation suffered at the hands of the All Blacks scrum on their home patch.

As the set-piece goes, so too may the fortunes of Eddie Jones as England coach.