The All Black javelin - the 'Sonny Bill' attack

In modern rugby, the All Blacks are the trendsetters.

Once it was Australia, then it was England. Now, New Zealand.

Since the days of Graham Henry espousing Total Rugby, to the adjustment and hiring of ‘Mick the Kick’ in 2009 after the whitewash against South Africa, they’ve been pioneers, and had to be.

An A+ performance to one team, New Zealand might call a C. As to ensure constant innovation, they have to think like this, as to overcome future obstacles.

Line speed is the next.

England, Ireland and the Lions have all had Andy Farrell at the helm. All have beaten the All Blacks. This is no coincidence.

He is a defensive coach who coaches line speed, designed to spoil teams mid-flow.

Even back in 2012, the All Blacks struggled with their natural expansive game against line speed.

If we go with the trends, they will field more innovations to combat other teams and their strategies.

To keep ahead of the curve, this means finding ways to counter line speed, especially before they face off these teams at the world cup.

Jacques Brunel himself stated they would take lessons on defensive line speed from the Lions into the series with the All Blacks.

Why one wouldn’t focus on new innovations instead of year-old tactics New Zealand know in detail, I’ll never know.

The All Blacks had patterns waiting for it, which were used to devastating effect.

Before we go into line speed, the important thing to remember is that the line gains confidence from its inside men.

The first three defenders in the pillar defence give confidence to the outside defensive line.

The 13 cannot rush if their inside is being hit.

Now that’s sorted, let’s get into it.

This is a call heard in the All or Nothing: All Blacks series. My gut tells me this is the name New Zealand have assigned for the following plays, as such I shall use it as the description.

In the Lions series, the All Blacks could almost be forgiven for playing Warrenball.

They used this attack, a lot, due to the Lions’ line speed.

To counter this, the All Blacks played their second first receiver often at 15, and had their 12 usually in the form of a crash ball player.

Sonny Bill Williams, Ngani Laumape and Ma’a Nonu all have filled this role.

Against the ‘rush 13’ defence, this is an incredibly astute choice. All of these choices for 12 had multiple qualities and skillsets about them. Two in particular, were shared by all.

They’re powerful men. They can distribute and offload.

These traits combine very nicely, for the exploitation of a ‘rush 13’.

The reasoning is that these men are the initiators of ‘javelin plays’.

Plays that follow a certain dynamic off the first phase in particular. These are moves the All Blacks expect to happen as routine, whereas other teams would think themselves lucky to achieve.

Javelin plays are plays that are launched off a set-piece.

They are unique to the All Blacks, in that the offload in the tackle is a designed and necessary part of the javelin move.

This, for me personifies why the standards of the All Blacks surpass any other team in the world by a country mile.

The skillsets are so high that the offload is a standard occurrence.

In these plays, the All Blacks will run tight lines off each other to occupy and compress the 10-12-13 (midfield). They traditionally use their 10, 12 and 14 to do this.

This has multiple benefits.

The outside men cannot rush, due to the targeting of the midfield.

Because the strike runner is often the 12, the defence will all have their heads turned in, as he will strike the 10-12/12-13 channel. This means they are often unaware of what’s happening outside them.

To cover the flat and tight options from Beauden Barrett, Williams and Ben Smith, they will also constrict, marking their own man but leading to separation between the 13 and 14 on the outside.

This hole is the target of the javelin runner.

The hard-running power 12 prevents the outside rush moving up, while the off the ball work by his 10 and 14 allows him a chance for a one-on-one, increasing the chance of breaching the gain line – a hugely important part of this whole tactic working.

This move combines multiple elements of the javelin attack yet, despite its effectiveness, is the novice version.

The difference? The All Blacks have taken it further.

Let’s take a look how.

The principles are followed even with 14 men. The 10-12-13 are constricted by the running trio of Barrett, Williams and Ryan Crotty.

The constriction opens the gap between 13-14, and the trio’s ‘off-the-ball’ gives Williams a 1-on-1 with Finn Russell.

The gain line is made, the offload is given, and Damian McKenzie goes through on the javelin line.

His final job as the javelin Runner is to draw the openside winger and 15, before putting his support players in. 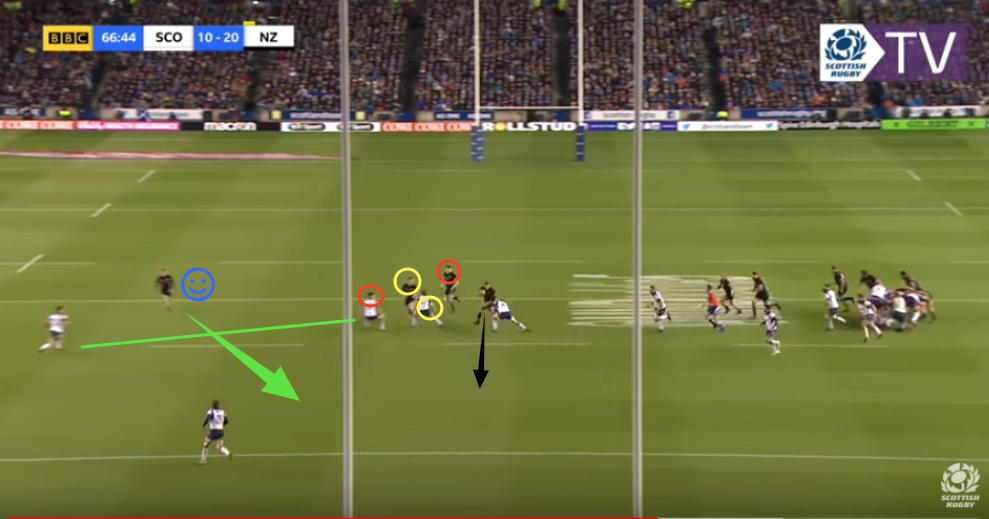 We can see here how the tightness of the All Black lines allows a one-on-one for Williams, while also constricting the Scottish midfield and, in turn, opening the 13-14 hole for McKenzie. 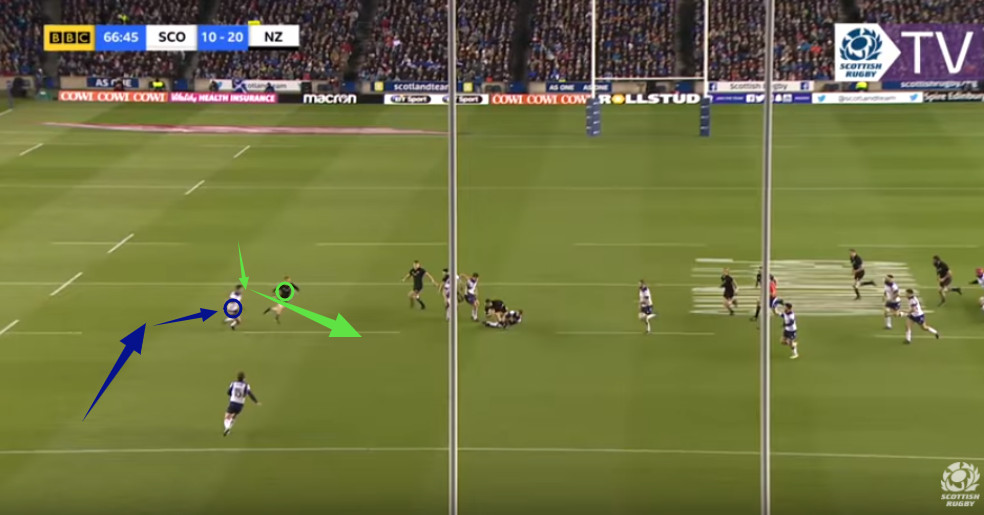 McKenzie’s wide start position forces Jones to mark him wide. This is key, as the javelin line is an out-to-in line.

The same as the England version, it plays on the winger focusing on the inside play and not paying attention to his front.

This gives McKenzie an edge as, not only is he running at a growing gap as the 13 constricts, he can also change his line before the winger changes his, even if watched.

We see it proved here, as Huw Jones is caught watching the developing play within the 10-12-13 and not McKenzie.

Jones’ original line was to intercept McKenzie’s starting line as shown above. Distracted by the play, he doesn’t notice McKenzie’s change in line, allowing McKenzie through without being touched. 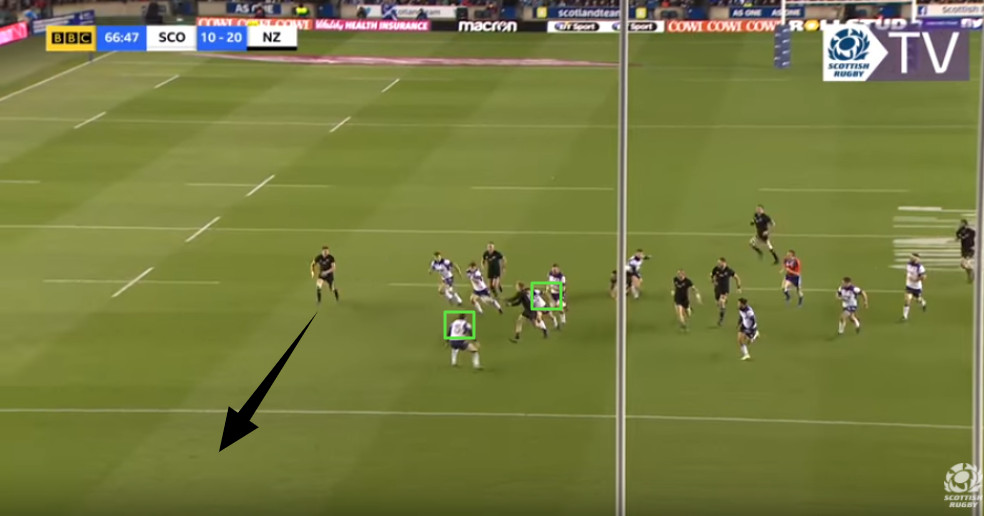 McKenzie, in turn, commits the openside and fullback, allowing Barrett an easy run in.

This bears similarity to the England version. Brian O’Driscoll started out opposite Mike Tindall, but did not notice his out-to-in line due to watching the play.

By the time he does, it’s too late. Tindall’s line takes him right through the gap, and onto a try.

The flat pass and off-the-ball tying in of the 10-12 allows Laumape a one-on-one with Davies’ inside shoulder via a clever running line, reaching the gain line.

This break, plus the constriction of the Lions midfield to cover all three, opens the 13-14 hole, and allows Anton Lienert-Brown to run the javelin line and receive the ball behind the line, guaranteeing a clean break.

As javelin runner, he runs an identical line to McKenzie, drawing the openside winger and fullback, clearing Barrett for his first Test try.

This is the Scotland variant, albeit with errors.

Jack Goodhue has to slow, due to over-running. It’s not his fault, as a poor pass from 9 slows up Sonny Bill Williams.

If Sonny Bill doesn’t have to slow down to catch the pass from 9, Goodhue doesn’t overrun and he goes through clean like Lienert-Brown and McKenzie.

In this case, however, footwork is needed. He has McKenzie on his right coming with him.

Correctly, this is probably a try.

Williams does his job here against a two-man tackle. Which I colour myself incredibly impressed by.

What must be remembered on the first phase, is that off-the-ball and a powerful 12 are key.

The All Blacks having Sonny Bill Williams in their team is a huge element as to why they can do this.

The 12 needs to get over the gain line to be in the position to offload accurately, the off-the-ball is needed to ensure the 12 makes a one-on-one contact to get the gain line to do this, while the tight-knit running by the 10-12-14 is key to opening that 13-14 hole for the javelin runner.

Stopping the ‘roll and flop’

Sonny Bill Williams always offloads from his right arm. To do this efficiently, he uses a technique I’ve termed the ‘roll and pop’ that enables him to control the offload from beginning to end.

Williams’s power means regularly making the gain line but, if his arm is wrapped by the defender, the ball cannot be offloaded, and the javelin can’t happen.

To circumvent this, he uses the ‘roll and pop’, a technique designed for him to nullify the right-hand Tackler in a two-on-one tackle.

This involves him rolling his arm over the right tackler and his power partially taking him through the tackle, allowing his now free arm to offload with accuracy.

Lets take a look at some examples.

The ‘roll and pop’ is essential for this move. A defender must hit Sonny Bill’s left side hard before he has a chance to do this.

Either that, or said tackler must move his arm to hold Williams’ arm post tackle to interfere with the offload.

For those astute readers, you would notice it happens in the France example too. Little things yes, but all put together, can stop this before it does real damage.

Analysis will mean teams have a respect for this Attack, restricting the aggression of the ‘rush 13’ defence and allowing more wide opportunities for New Zealand.

This in itself opens the game, to where the All Blacks really want to play.