Another college football weekend is in the books, and it’s Alabama first, the rest of the nation a very distant second.

That said, there was still plenty of good football games as the conference races enter the final stretch, with playoff spots up for grabs. So, let’s take a look at who covered themselves in glory and who didn’t, with Week 11’s Heroes and Villains.

Heroes
Boise State: a big win against rivals Fresno State. The Broncos clawed their way back from a 17-3 deficit just after half-time for a 24-17 victory that keeps them alive in the Mountain West Conference title race. Bruising running back Alexander Mattison had 144 yards and two touchdowns.

Northwestern: the Wildcats are headed to Indianapolis and the Big Ten championship game after sewing up the western division with a hard-fought 24-10 win over Iowa, whilst Wisconsin and Purdue both lost.

Daniel Jones: the Duke quarterback amassed a program-record 547 total yards (361 passing and 186 rushing) for the Blue Devils in their 42-35 win over rival North Carolina.

Oklahoma: the Sooners survived the annual defence-free Bedlam game against Oklahoma State, winning 48-47 when the Cowboys’ two-point conversion fell incomplete on the last play of the game. Kyler Murray’s Heisman campaign is alive.

Adrian Martinez: Nebraska’s freshman quarterback is finally healthy and going to work as the Huskers rebounded from a shocking start to post their third win under Scott Frost, thumping Illinois 54-35. Martinez accounted for 345 total yards and four total touchdowns.

Utah State: the Aggies scored their ninth consecutive win with a 62-24 thumping of San Jose State, and remain the only undefeated team in the Mountain West conference play. Quarterback Jordan Love threw five touchdowns amongst 491 passing yards amongst a school record 802 yards of offense.

Notre Dame: no Ian Book, no worries. The Irish continued on their merry way with backup Brandon Wimbush in at quarterback, dispatching a hapless Florida State squad 42-13, a score line that actually flatters the Seminoles.

Utah: the Utes have one hand on the Pac-12 South division title following a 32-25 win over Oregon, despite being without their starting quarterback Tyler Huntley and star running back Zack Moss.

Tennessee: Jeremy Pruitt clearly can coach, and the Vols are pointing in a northerly direction after so long in the wilderness. Case in point was their 24-7 win over Kentucky. One more win, over either Missouri or Vanderbilt, and Tennessee makes a Bowl game. Big effort by Pruitt to turn the program around.

Army: the Black Knights are 7-2 after their 31-13 win over Lafayette, and tomorrow will probably be ranked in the AP Top 25 poll for the first time in eons.

Nevada-Las Vegas: the Rebels, coming in with a 2-7 record and as 24-point underdogs, topped undefeated San Diego State 27-24. 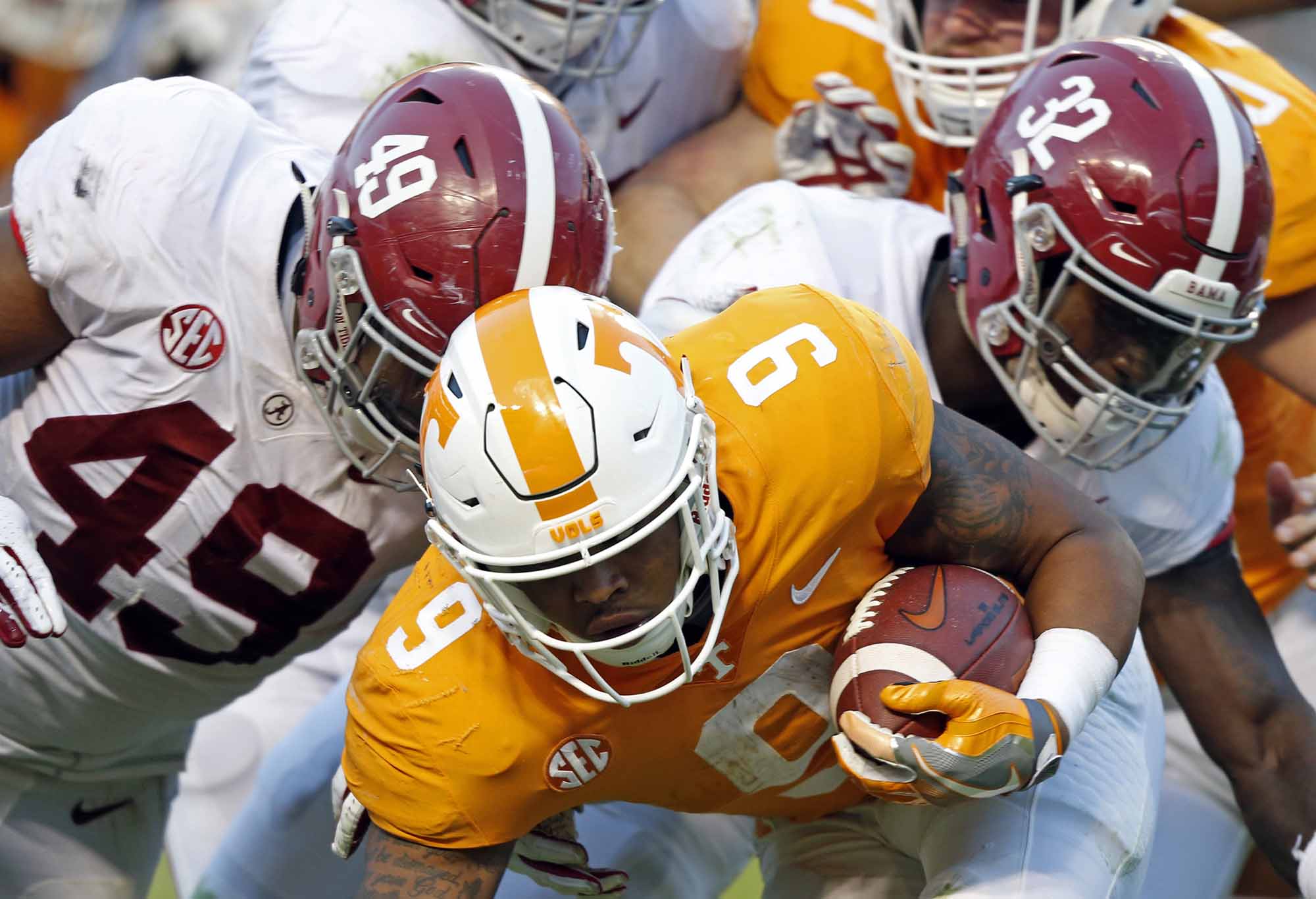 Villains
Miami: is there a more disappointing program considering the amount of pre-season hype than the Hurricanes? They’ve now lost four straight and need to beat either West Virginia or Pitt to reach a Bowl game. Probably won’t happen. Mark Richt is going to have a long off-season.

Southern California: fell 15-14 to Cal, the first time they’ve lost to the Bears since 2003. The Trojans gained just 41 yards in the second half. The coaching staff’s supreme inability to take advantage of available talent continues to confound and frustrate. Clay Helton was booed up the tunnel post-game, and could be fired literally at any moment now.

Alabama: so the Crimson Tide beat Mississippi State 24-0 but the story is star quarterback Tua Tagovailoa going off injured and not playing the second half. With backup Jalen Hurts also injured, it was third-stringer Mac Jones in the game, and to say he was underwhelming is an understatement. If Tua’s injury is serious and Hurts can’t go, the Tide might, finally, be vulnerable. Watch this space.

Colorado: the Buffs were 5-0 and are now 5-5 after a home loss to Gardner Minshew and the Washington State Cougars. Talk about the wheels falling off!

Purdue: the same team who smashed Ohio State a few weeks ago was belted 41-10 by a Minnesota team that’s been terrible, giving up 55 to Illinois last Saturday.

Virginia Tech: the Hokies drop to 4-5 on a disappointing season after being thumped 52-22 by a resurgent Pitt, giving up a whopping 492 rushing yards to the Panthers.

Texas Christian: the Horned Frogs suffered their worst loss in recent memory, smashed 47-10 by an unstoppable West Virginia squad, and now Garry Patterson’s men require wins in their last two games (against Baylor and Oklahoma State) to avoid missing the post-season for just the third time in Patterson’s long tenure in Fort Worth.

Kentucky: things are falling apart for the Wildcats who have lost in convincing fashion two weeks in a row, thumped by Georgia last week and handled by Tennessee this week, 24-7. That’s one of the more surprising results of the entire season.