In one of the great displays of post-match remorse, Wallabies Captain Michael Hooper sat dressed in the ‘number ones’ next to Michael Cheika after the 9-6 loss to Wales in Cardiff, and gave a straight-faced answer to the question that was always coming.

“If I had my time again, I would’ve gone for the shot,” he said, explaining the twin decisions to ignore penalty goal attempts and instead kick for the corner.

“Backed our guys, backed the want to get the try and keep the foot on, but probably my reading of the game there was amiss with it was going to come down to penalties in the end,” he continued, borrowing from the works of ‘Captain Obvious’.

“Hindsight’s obviously a nice factor but I should’ve gone for goal.”

Pressed by (I think) one of the local journalists on whether he did initially point toward the posts as appeared, or whether there was some discussion among the Wallabies, Hooper simply replied, “We kicked for touch.”

“So what happened there, what was the decision?”

“We just kicked for touch.”

OK then. At least he recognised at some point that the three-point options were there. Sort of.

But let’s just unpack this a bit. Hooper admitted, “…but probably my reading of the game there was amiss with it was going to come down to penalties in the end.”

That is, in the 50th and 54th minutes of a game which at both moments the scoreboard read three-all – and with four penalty goal attempts in total the only scoring plays of the game to those points – the Australian captain hadn’t yet recognised that the game might be decided by penalties.

I had initially offered up in the social media post-mortem on Sunday that I was comfortable with the first decision to kick for the corner in the 50th minute, with my recollection being that it was out of Bernard Foley’s range. 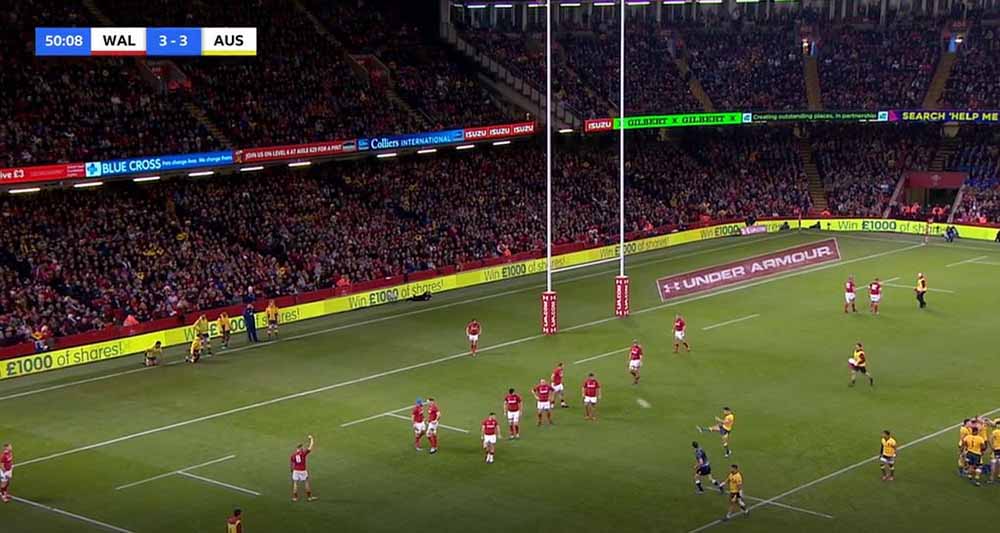 This image above forced me to revisit that position. I’m actually still comfortable with the decision; with half an hour to play, and Wallabies having been on an attacking roll since the resumption, kicking for the corner represented an opportunity to attack off set piece deep in the Welsh 22.

But the kick at goal would have been Foley’s easiest of the night. As the image shows, the mark was on the easier side for the right-footed Foley, was no more than twenty metres back from the posts, and a similar distance in from touch. At worst, on the angle, he wouldn’t have been any further than twenty-five from the posts. Even on a bad day, Foley kicks that goal easily. 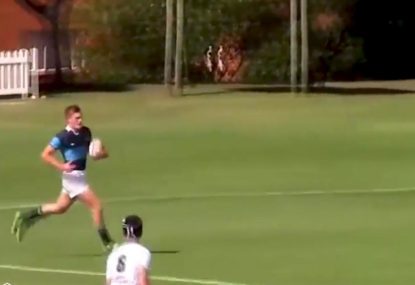 Still, I could live with that decision.

From the resulting lineout drive, Wallabies hooker Tolu Latu lost possession under pressure from Welsh captain Alun-Wyn Jones. The Wallabies actually secured the loose ball and after referee Ben O’Keeffe had ruled a knock-on, appealed to both O’Keeffe and his near-side assistant that it should have been play on, with Jones effectively propelling the ball backwards. They may have had a point.

But regardless, that should’ve been a red flag to the Wallabies brains trust that things weren’t going to go all their way, and that points would be a premium whenever offered. 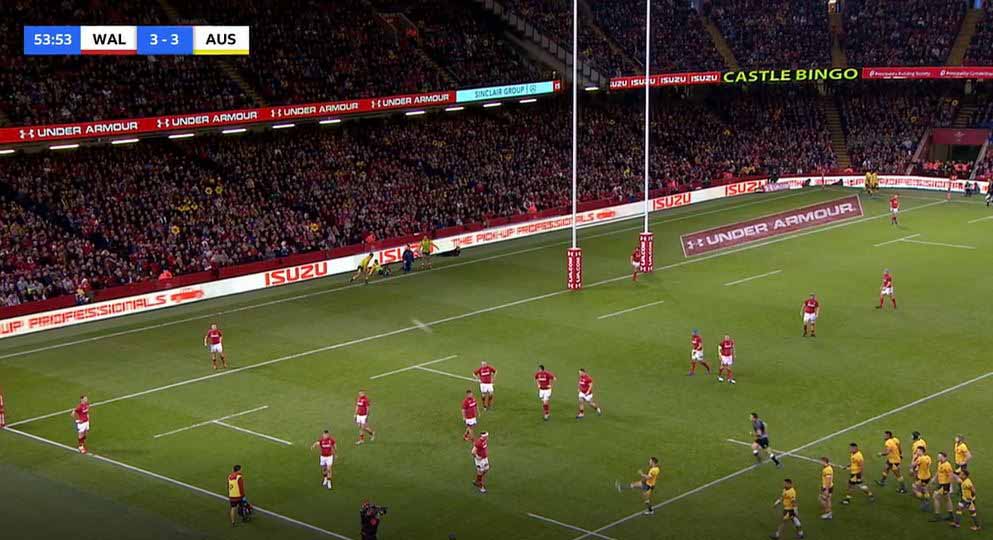 As this image shows, the mark this time was around eight metres in from touch, and just outside the Welsh 22-metre line. It was still well within Foley’s range, and again on his preferred side. As the penalty was awarded, Will Genia actually motioned downward with his hands to slow things down, before pointing to the posts.

The BBC vision we saw in Australia didn’t show the Wallabies huddle (it was showing O’Keeffe speaking with Welsh replacement Liam Williams), and the next shot of the Wallabies we saw, Foley was collecting the ball to kick for the corner. It’s unclear who made the decision, but either way, Genia’s suggestion to relax, reset, and take the points was ignored.

Foley kicked for the corner, and Latu overshot the lineout throw aiming for Adam Coleman jumping at number four. Wales went wide on the counter-attack, before Leigh Halfpenny kicked downfield for Dane Haylett-Petty to regain possession back near the Wallabies own 22m line.

Three points spurned and seventy metres lost. And still with twenty-five minutes to play. It was a big moment.

Sadly, it was just the next moment in a growing trend of poor decisions from the senior Australian players who should have known better.

Tatafu Polota-Nau was on within minutes of Latu’s errant and costly lineout throw, and his own first set piece throw was won by the Wallabies at number four soon after, but under heavy Welsh pressure.

Later, not long after Rob Simmons entered the fray, regularly touted as the best lineout exponent in Australia, lineout calls to the middle and the back where contested at best, and easily stolen at worst.

This should have been the sign for the Wallabies to throw to the front – the lineout version of ‘channel one’ ball in the scrum – and just get on with the game, but this was just another occasion where the ‘reading of the game there was amiss’.

The deeper the game went, the worse the Australian panic became. The attack was being ambitiously launched from deeper and deeper behind the gain line. Wales held their discipline in the centre channel in their own half, but conceded penalties in the tram lines, comfortable in the knowledge that they had the Wallabies covered in the lineout, and should they happen to concede a penalty in kicking distance, at least the angle would be a factor.

And with no possibility of getting into position where even a drop goal might be an option, the Wallabies had to take what they could get in the 75th minute, when Matt Toomua kicked the penalty to level the scores at 6-6. 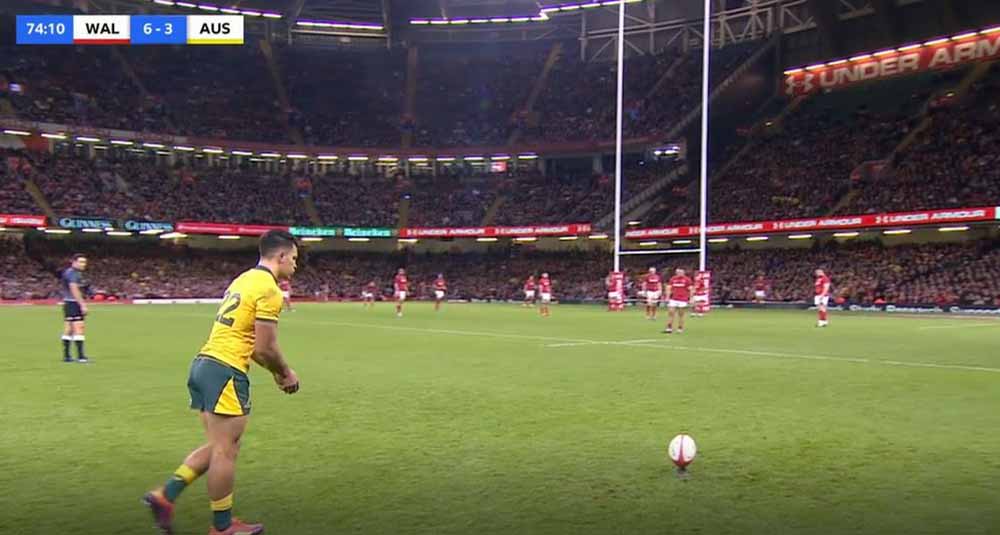 Toomua’s goal-kicking has perhaps been the most surprising Wallabies find this season. A very occasional kicker at the Brumbies – and several of the few kicks he did take being quick drop kick conversions from in front with the clock ticking – Toomua from the tee in 2018 has been consistent, reliable, and most importantly, accurate.

Sadly, that’s the extent of the Wallabies fall in 2018; that the discovery of a quality backup kicker is highlight.

Coming the same weekend Australian one-day cricket captain put all his batsmen – including himself – to perform or perish, the Wallabies appear to be in a free-fall of their own making, intent on attacking their way out the slump, and with next to no responsibility or accountability being offered or found

It’s the rugby equivalent of Homer Simpson trying “dig our way out” of an already large hole.

The Wales loss means the Italy match this weekend becomes win-at-all-cost, which in turn means all hands on deck and all possible development opportunities lost as the Wallabies desperately reach for more shovels.

But hey, at least they’ve realised they should’ve kicked for goal…