This is the second book review I was intending to do for those interested in some light reading over the AFL off-season, which happens to coincide fortuitously with the Summer holidays.

Book: The Football Solution: How Richmond’s Premiership Can Save Australia.
Author: George Megalogenis
What: Ostensibly espouses the theory that the manner in which Richmond won the 2017 premiership might act as a shining light for Australian politics, although in reality, much of the book covers the history of the game generally, and the Richmond Football Club more specifically.

This book is already a little bit dated, given the catalyst for its writing was Richmond’s’ premiership from 2017. It may have held a bit more currency if Richmond had continued its good form this season all the way to grand final day.

Nevertheless, it’s an engaging read, especially for anyone interested in the history of Australian Football and the early years of the inner-city VFL clubs, which at one point, was most of the league.

Many would know Megalogenis as a seasoned political journalist. He has also authored a number of books on Australian politics. In the past, you may have seen him as a panel member on the ABC show: Insiders, especially if you tuned in five minutes earlier for the start of Offsiders.

What I wasn’t aware of until Richmond broke its premiership drought was that Megalogenis is a life-long Tigers fan, a real footy fan, not the kind you occasionally come across in the political game.

Not only do we share the fact that our clubs broke long premiership droughts (mine occurring the year before Richmond’s), we also share some similar life experiences: similar age; being born into a Southern European soccer household and becoming a devotee of the indigenous game.

Megalogenis has explained publicly that in part, the book was influenced by his experience on Twitter and the huge difference he had observed in the manner politics was discussed as opposed to how sport was discussed. 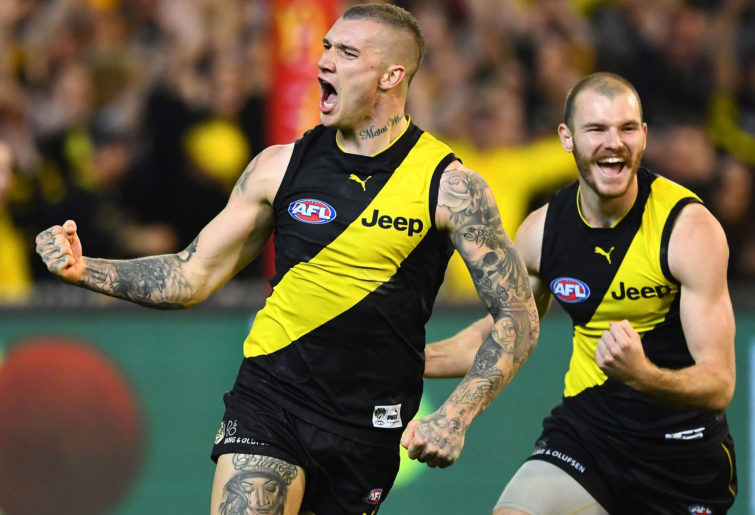 The former with its take-no-prisoners approach, the two sides of politics never agreeing to meet somewhere in the middle, meaning all discussions were in vain (if they could even be called a discussion).

This was in stark contrast to the day, midway through the 2017 season, when he boldly predicted that Richmond was going to win the flag. On the whole, the reaction was very different to what he had expected. It was overwhelmingly positive and encouraging.

Being the deep thinker that he is, he took a step back, and pondered the question about how football clubs are run in comparison to how political parties are run.

It occurred to him that the modern political malaise of changing sitting Prime Ministers on a whim was not too dissimilar to Richmond’s barren 35-year period when they too would look to sack coaches on a whim.

Sections of the book focus on Richmond’s modern leaders, the President, Peggy O’Neal, and the CEO, former player, Brendon Gale, and how together, they’ve introduced a new culture which acted as a counter-weight to the typical response of yesteryear in relation to one poor season.

Let’s not forget, the coach, Damien Hardwick, had already been coach for seven seasons, when at the end of 2016 they fell out of the finals prior to bouncing back the following season. The Tigers of old, and many other football clubs for that matter, would have gone down the easy route of sacking its coach with such a long, unsuccessful stint.

But not the new Tiger regime.

Similarly, once upon a time, an Australian political leader could lose one election, and survive to fight another one. That’s not the case anymore, and Megalogenis argues that the manner in which the Tigers now conduct themselves might act as a shining example of how the political parties can change their culture.

An interesting theory, certainly worthy of a treatise, one Megalogenis argues with intelligence, but at the same time, it’s probably not a theory which can sustain a whole book.

The bulk of the book is actually focused on the history of the game, and Richmond’s place in that history. I can’t really say that the two segments of the book flow seamlessly, but being a lover of Australian Football history, I enjoyed reading it anyway.

Megalogenis dedicates one part of the early history to the two sides of the argument around the place Marn Grook has in that history. While historians such as Geoffrey Blainey have dismissed the link outright, Megalogenis argues in favour of a more sympathetic hearing.

What is not in dispute is that it’s an extraordinary coincidence that the man we call the father of the game, Tom Wills, grew up in the Western Districts of Victoria at a time when there were few Europeans. He grew up with the indigenous population, spoke their language, played with the local children, and there is little doubt that at a minimum, he saw the local population playing Marn Grook.

That’s good enough for Megalogenis, and it’s hard to disagree.

Megalogenis reminds us, if we needed reminding, how incredibly popular the game was from the earliest days. This was a time when most of a club’s support was drawn from the suburb which bore the club’s name. The majority of spectators would have walked to the game.

By 1920, clubs such as Collingwood, Carlton and Richmond were regularly getting 20,000 plus to football games, a significant percentage of the populations of the respective suburbs. 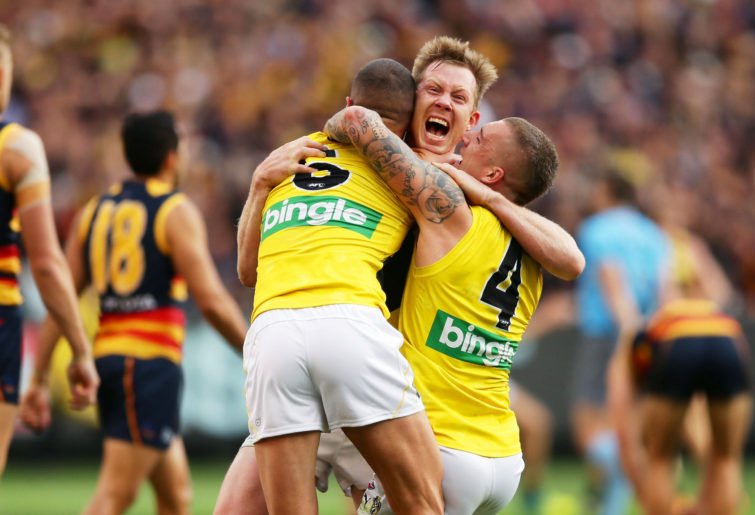 Disruptions ensued, with the depression of the 1930s, World War II and then the post-war immigration boom. Australian Football rode these disruptions to retain its hold on the city, even if bit by bit, it meant that the support for footy clubs was not coming from the local suburbs, but from far and wide across the metropolitan region.

I close with one of the most poignant tales in the book. Richmond broke another premiership drought back in 1967, on the way to becoming a powerhouse club through the 1970s.

A large Richmond contingent was hoping to celebrate in the same manner as such wins were celebrated back in the 1920s and 1930s. A mob of supporters descended on Richmond Town Hall, only to find it had been booked for a private function, unrelated to footy.

Where were the Richmond supporters? Back at home in the outer suburbs watching the replay on the TV – then early glimpse into the emerging state of modern footy.

The Richmond Tigers finished 12th on the ladder in season 2021. They had nine wins, one draw and 12 losses. They were unfortunate to miss out on the finals by one and a half wins. There were plenty of injuries that the Tigers were forced to deal with. They only had four players that featured […]

Three-time Richmond premiership captain Trent Cotchin has relinquished his leadership duties but will play on with the Tigers in 2022.

Welcome to part six of my season reviews. 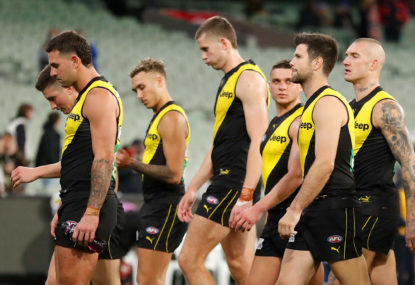