Manchester is Blue for the foreseeable future

Two articles headlined the BBC football website ‘gossip’ column this morning. Like so many others I watch this feed intently, hoping beyond hope that Man United have managed to convince Messi to end his career at Old Trafford.

This morning’s headlines, for me, sum up the premiership now, and for years to come.

Manchester United will apparently bid for Jordan Pickford of Everton if David de Gea refuses to commit to another contract.

And Manchester City have beaten Barcelona to the signature of Frenkie de Jong, the greatest talent to emerge from Holland since Patrick Kluivert or Marco Van Basten. City hope he’s the best since since Johan Cruyff. Maybe they’re right.

Manchester United weren’t even mentioned in the de Jong story. Barcelona thought they had the inside running on another wunderkid who dreamed of the Nou Camp. They saw him as a natural successor to Sergio Busquets. He idolises Messi. But he chose City.

Pep Guardiola. The attacking football City play. The year in, year out guarantee of Champions League football. The sheer class of everything City. How could de Jong resist?

Juventus were mentioned as perhaps the only team who could gazump City. The prospect of becoming part of the evolving galacticos of the Old Lady might be enough to sway de Jong. But he’s not headed to United.

United have somehow held on to de Gea for all this time. He has never had the support of a world-class defence. Peter Schmeichel and Edwin Van de Sar before him rightly became United legends with their feats of goal-keeping brilliance, but they always had the support of the likes of Jaap Stam, Rio Ferdinand, Nemanja Vidic, Dennis Irwin.

De Gea, like all Spanish players, must have grown up dreaming that his legacy would be measured largely by his contribution to the legend of Barcelona, or Real.

Yet he has remained loyal to United and he needs to be acknowledged for that. Maybe that is about to come to an end.

And for all the quality of Pickford, if de Gea departs and United’s defence is built around the young English keeper, rather than perhaps the world’s best, where does that leave United?

Right where Liverpool found themselves before Klopp I reckon. In that no-man’s-land where good quality English players, and mid range Europeans, consider signing up. Where United slip down the pecking order of the BBC gossip site, so that the ‘stars’ United are linked with are tossing up between Valencia, West Brom…. and United. And meanwhile the next de Jong, and the Neymars, and the Kanes, circulate between the real heavyweights, Bayern, Real, Juve, Barca…. and City.

United took decades to work out how to evolve beyond Matt Busby. Liverpool seemed to do the same getting beyond Paisley.

Klopp is beginning to change that for the ‘Pool. Is Mourinho capable of that for United? David Moyes, Louis Van Gaal. United have underachieved.

If it goes on long enough it becomes self fulfilling, and Manchester will turn blue for decades to come. 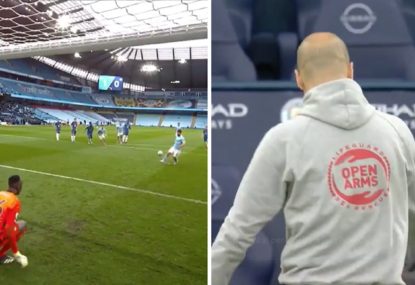 Pep Guardiola has hit back at suggestions from Jurgen Klopp that Manchester City benefited from a two-week break over Christmas due to the coronavirus pandemic.