Resentment and hope, pessimism and cynicism, sky-is-falling metaphors manifested in reality and the words of Kevin Rudd quoted unironically – the FFA annual general meeting was held yesterday, and what a smorgasbord of conflicting sentiments it inspired.

Leaving us with three new directors from four, two new qualifying members and the final words of a persistently blinkered ex-chairman, the meeting set a discordant tone. It may well ring out in dissonance for a while before we get a final major or minor melody playing.

Steven Lowy opened the meeting with an address that was entirely too long and was delivered with bitterness and steeped in irony.

He began by recounting a recent dinner for the existing board, which he compared – in a cringeworthy and inappropriately grandiose gesture to rival James Cameron at the 1998 Oscars – to the last supper. Was Steven Lowy to assume the role of Jesus Christ? And who would play Judas and Saint Peter? Is Frank Lowy, in this metaphor, the Lord Almighty?

Mr Lowy again reiterated the position of the previous board in opposition to the Congress Review Working Group’s (CRWG) recommendations.

He thought it prudent to give advice to the new future board members.

“Each board member will have to justify and explain its choices to the entire football community,” Mr Lowy said, apparently ignorant to the astonishing irony present in him offering up this advice, having overseen an almost totally opaque governing entity.

He rattled off the achievements of the FFA, A-League, Socceroos and Matildas before listing his own credentials for some reason. This was his last moment as Australian football’s boss and he was still brandishing his weapon and roaring out a rebel yell on an empty battlefield upon which, as general of the losing side, he led a charge into the maw of defeat some months ago.

“We would like to have to have moved more swiftly on issues like the new operating model and the expansion of the A-League and address the urgent need to provide much-needed resources and match experience for our junior national teams, both male and female,” Mr Lowy said.

“We would’ve also have liked to have made better progress on better connecting the grassroots with the professional game.”

Regret, then, a sentiment we all share when it comes to the last three years.

The business of the AGM then began, and first two qualifying members – to become stakeholders after meeting the relevant criteria in due time – were voted on.

The Association of Australian Football Clubs (AAFC) and Football Coaches Australia were both approved by a show of hands to become future members. A movement to backdate the qualification process for the AAFC – as was recommended by the CRWG and signalled as appropriate by the congress when the report came out – was then voted down, first in a show of hands and then, when contested, in a polled vote.

The fact a flip-flop occurred here is a remnant of the old skulduggery that the fresh air of a new era will hopefully blow away.

The Congress failed to pass a Constitutional change that was recommended in the CRWG report that was agreed by the majority of Congress in relation to @AAFClubs. ????????‍♀️

After that, the board director elections were held, the marquee event. As had been mentioned at the top of the show, Mark Rendell had pulled out of the running. All the member federations, stakeholder groups and A-League club representative sidled into a small designated voting room and cast a ballot on the remaining candidates. The final results of the first round of voting were as follows.

Heather Reid received nearly unanimous support and was automatically voted in as a director along with Joseph Carrozzi and Chris Nikou, having exceeded the minimum percentage share for that to happen. All the other candidates were then pooled for another vote to fill the fourth and final slot, but it was clear from these early results that Remo Nogarotto and Stephen Conroy were the only two viable candidates remaining.

The fact that Mark Shield got literally zero votes was disappointing, having been a bright and enthusiastic speaker at the community forum earlier this month as well as being a hugely experienced and involved football man. Morry Bailes, Linda Norquay and Danny Moulis all also were unable to lash together enough voting allies to make an impression on the occasion. Ms Norquay has been tipped by some as a frontrunner for one of the board-appointed director positions.

Wow, Shield got literally no votes in the first round. Man, that Community forum, and candidates' performances in it, seems to have had literally no effect. #FFAVotes pic.twitter.com/85yRCitFrg

A fairly moot process then dawdled along from which all candidates except Mr Nogarotto eventually withdrew. Mr Nogarotto was then confirmed as the winner of that fourth director’s spot.

“I declare the motion carried,” Mr Lowy said, with all the enthusiasm of a man presiding over the details of his own funeral.

All the successful candidates were then given a chance to say a few words, a taster perhaps of an attitude to come.

“I’ve got my sleeves rolled up, ready for the hard work, so let’s begin.”

“Normally when such attention is directed to governance bodies it’s normally not good news,” he said.

“So I’m hoping that from today unity is what the name of the game is and the focus shifts to our athletes, to the fantastic people who play the game and to the opportunity that they have…

“I’m humbled, absolutely humbled, to be in this position, but the hard work is about to start, so thank you all for your support.” 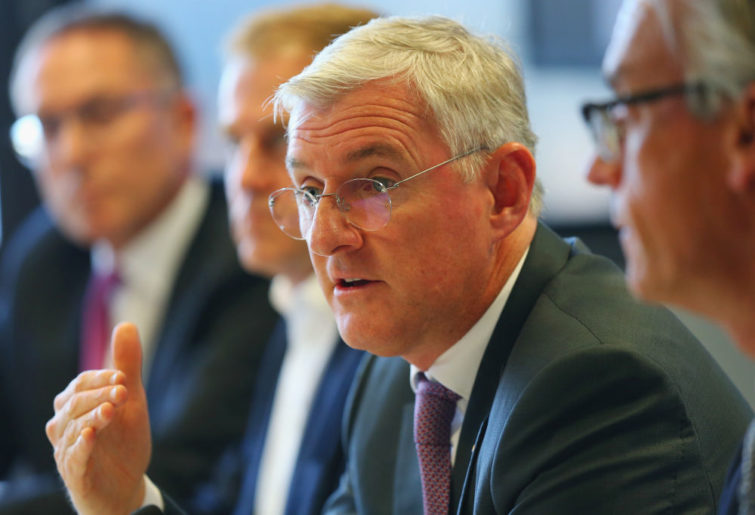 Chris Nikou, former and now future board member, stood up next.

“Look, a lot has been said in the last two years, but at the heart of it there’s a lot of passion in our sport and it’s time,” Mr Nikou said, before going on to reuse a metaphor he’d brought out at the community forum to illustrate one of his few verbalised positions “for everyone to get in the boat and row together”.

“Difference of opinion is fine; unity of purpose is more important, and I feel that with board that we’ve got going forward there’s a lot of hard work and there’ll be a lot of debate, but we will bring the sport forward.”

Then he turned to the back of the room.

“To the press, hopefully the dialogue shifts from administration to sporting things – that would be good,” he said while smirking, but upon hearing no evidence of shared mirth in the room, he returned to a neutral expression before thanking his former board colleagues and sitting down.

If Mr Nikou is expecting administrative shonk to go unreported by the press, he’s got another think coming. He represents a hole, big enough to spy through, in the partition separating the Lowy era from this one, and it was not only a flat joke but also a rather unwise slip, a flash of the ankle of his own private desires for continued opacity.

Remo Nogarotto then stood, the last director to speak.

“I’d like to extend my thanks as well,” Nogarotto said. “And thank you Steven [Conroy] for graciously stepping down there at the end.” Mr Conroy had been the last rival to withdraw from the race for the final director’s spot.

“I find what happened today to be sound, and in the interest of the game.

“I agree with the other three directors that we need to unite now behind a common purpose and a common vision.

“But let’s not be intimidated or ashamed of democracy, because democracy, after all, is a good thing.”

Mr Lowy then read out a letter ex-Prime Minister Kevin Rudd had apparently written to President Barack Obama after the latter was elected.

“‘Infinite expectations, finite resources’, I don’t think I could improve on that message for any incoming chairman,” he concluded, one last woe-was-me message delivered just before the death knell rang over his tenure as chairman.

The suitability of all the newly elected directors will be debated, but the final verdict cannot be handed down yet. Mr Carrozzi’s history with Greater Western Sydney, particularly concerning that club’s relationship with the fans of the Western Sydney Wanderers, leaves a mark on him in spite of his encouraging words over the past few weeks.

Mr Nogarotto’s associations with Australian football’s past will give some pause over his intentions. Mr Nikou is obviously compromised in the eyes of many because of his past tenure on the board.

Ms Reid, as was demonstrated perhaps by her overwhelming share of the votes, is the most faultless candidate but of course isn’t infallible either.

It’s also worth mentioning here at the end that the backroom games of vote whipping, alliances and backscratching are not over. Craig Foster’s withdrawal, as well as that of Bonita Mersiades as potential independent chair of the Women’s Council, are evidence that the realpolitik of the FFA is still mired in secrecy and handshakes. Mersiades said in a statement that she had heard “a member of the football fraternity” had marked her out as an “agitator” and was as a result to be excised from the running.

A piece of the roof under which the AGM was held fell off as the meeting ended. Perhaps the sky is indeed still falling.

Mixed feelings abound, but the fact this entire process, both its positive and negative aspects, was almost all available to digest is, if nothing else, a sign of a clearer future.