Irish give New Zealand a bitter pill to swallow

Known, for its strength, flavour and appearance, the bitter is a distinctive drop.

Many bitters were downed across the 26 counties in the Republic of Ireland this last Saturday – cheering the end of the All Blacks’ 118 year-string of victories over Ireland in Ireland.

Ireland’s 16-9 win over the All Blacks showed a side in ascendency, with whispers that they – not New Zealand – are now the favourites for next year’s World Cup.

Joe Schmidt’s team brought a dominant scrum onto the pitch, a variety in the game and an appearance of confidence that did not sway for the full 80 minutes. They were ahead for the entire match and never looked like being seriously challenged. Even in the final stages, with New Zealand mounting an attack, the Irish looked in control.

Against the very best sides in the world like the All Blacks, good coaches will instil a philosophy to keep the match close for a chance to win.

Great coaches will leave nothing to chance and have their sides dominate for a full 80 to secure the win. Steve Hansen has been hammering this home for years and Joe Schmidt, since taking the helm at Ireland, is too. 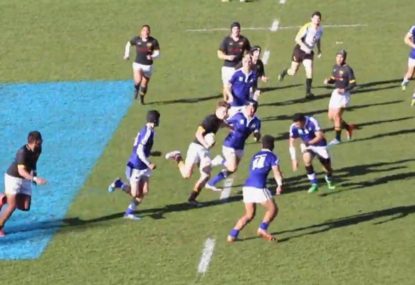 What makes Ireland’s victory over the All Blacks on Saturday more significant than the Springboks’ win in Wellington is the amount of possession Ireland had.

Electing to rarely kick away possession in the first 40, Ireland were in a position to dictate the pace of the match.

By the time the All Blacks were trotting into the tunnel to face Hansen’s halftime fury, the visitors had clearly logged significantly more running metres than they were accustomed to and tackled way above their first-half percentage averages.

Schmidt’s players knew their coach would not allow them to take their foot off the pedal; another 40 still had to be played. And in the end, the men in green did just that, playing to the edge of exhaustion and securing an historic win.