A litany of chances, all of them good and all of them missed, made for a torturous night for Western Sydney.

Newcastle, below the Wanderers on the ladder to start the game, leapfrogged them with a scratchy 2-0 win, with the second goal a late sickener for the home team.

“I felt like we were in our 18-yard box a lot,” said Nikolai Topor-Stanley after the game.

“It was probably the worst we’ve played as well, a stupid game,” said Ernie Merrick. They had won, but both of them were probably right.

The pitch that hosted this contest was absolutely abominable. Merrick had gleaned a handful of plastic shards and a steel screw from the grass before kick-off; “a carpark” is how he described the pitch.

A hip hop concert had been held there last week, with this debris blowing onto the pitch. So, not only was it a more potent source of tetanus than your average bed of nails, it also had rolling smears of dead grass and churned earth, a paddock barely fit for walking on in thongs much less a competitive game of top flight football.

That this grubby pitch was inside Spotless Stadium was enough to raise an acrid smirk. 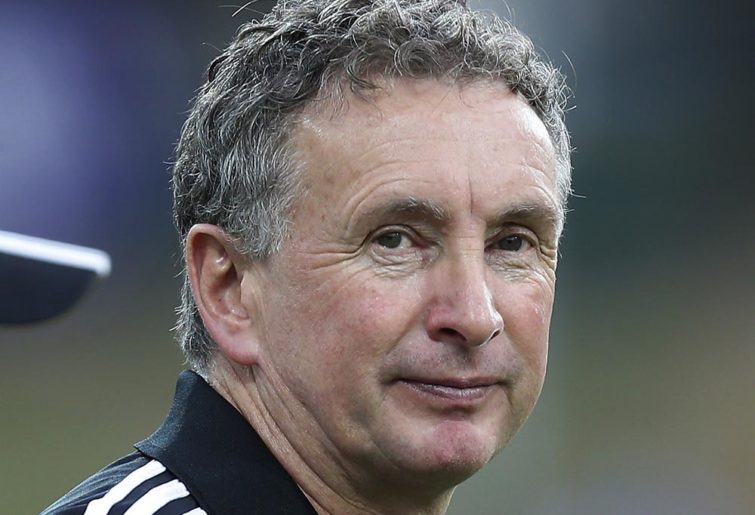 Ernie Merrick was unhappy with the pitch (AAP Image/Theron Kirkman)

Abraham Majok, making his first start in the A-League for Western Sydney, saw his studs fail him, scratching about as he was on the pitch-equivalent of a carpenter’s bench covered in a thick blanket of sawdust. He slipped readying himself for a cross, but had the chance to connect with another cross a minute or so later, when Josh Risdon pinged in a looper toward the far post; Majok had an open goal, but connected too truly with the ball, heading too acutely back across the face, allowing Glen Moss to save.

This fairly harrowing miss aside, Majok was taking up a nice, tucked-in position on the left wing, and was making some thrilling, leggy runs. Later in the first half, he really opened up the throttle, pacing past two better-placed Newcastle defenders in a straight sprint to get to the ball first. It was such an astonishing display of athleticism, even his teammates hadn’t bothered trotting up, so unlikely was it that he’d even make a contest of things.

The surface was making passing very difficult; it seemed so hard, and littered with hard clods or bald patches, that the ball would run along it at an almost startling pace, bobbling along as if propelled by a manic hamster sprinting around on the inside.

As a result, Newcastle’s direct, slightly frantic passing was working better in the early going; passes are snapped so pointedly between Jets on the counter, it hardly matters that they arrive with more speed and bobble than normal. Dimi Petratos and Jason Hoffman, the latter starting as his team’s striker, were combining well on the right, one-touch triangles pinging from instep to instep.

Most of the chances created by either team in the opening half hour largely came from fraught counter-attacks or set pieces. Newcastle opened the scoring in the wake of the latter event, with Petratos hooking in a sharp pass, skimming over the ground, into the box after gathering a cleared corner. Nikolai Topor-Stanley collected the pass, and squared it inwards for Hoffman, who tipped it through the fingers of Vedran Janjetovic. Petratos’s insistence on aggressive verticality, in both his passing and running, keeps Newcastle’s attacking appetite up, and his pass was a beauty here.

The Wanderers surged in response to their concession, with Keanu Baccus becoming literally pivotal, often acting as the solitary midfield pivot, transferring passes from the defenders up to the attack. Majok – who had swapped flanks – and Risdon were enjoying themselves on the right – Jair is not what you would call a defensive winger, or even a winger – and Alex Baumjohann was growing into the game. Riera struck the post with a header just before half time when he should have scored, beneficiary of a super cross from Raul Llorente. Half time came, with the Wanderers vexed and rueful and 1-0 down.

Hoffman had a chance right as the second half began, played in by Ronald Vargas, but could only toe the ball right into Janjetovic’s right arm. Riera then had an equally good chance, after a lovely ball from Bruce Kamau. Kamau then missed a diving header, mistiming it and achieving only a bare glance after Risdon’s wonderful curling cross.

Chances were spluttering out of this game now, but it was the Wanderers that were missing the best of them. This game, along with the Socceroos’ against Korea, also has me rethinking the whole “Is Risdon the best option at right back?” question.

Vargas and Jair had a pair of chances to add to Newcastle’s lead, but Janjetovic foiled them, just, on both occasions.

Often, when Newcastle’s centre backs have the ball and aren’t being pressed, you can see the forwards all rush up to the last defender, arrange themselves in a staggered line, and take turns running in behind, hoping to prompt a long ball. This was not the pitch for this sort of approach, but Newcastle aren’t easily dissuaded from their set modus operandi. One of the many downsides to this particular scheme is it completely bypasses Steven Ugarkovic, Newcastle’s most considered passer.

Kamau and Majok combined, one crossing for the other, in what looked like a certain goal – it would have been had Kamau’s cross been hit a fraction earlier. Risdon was carving up the Jets on the right, finding unlikely and pleasing angles for all of his crosses, while playing on the side of the pitch containing the most torrid patch of turf, a hellish parcel of land making victims of at least half a dozen toppled players.

Majok might have had a hat-trick in this game, had his first touch been better. On this pitch, a heavy touch will scupper the most considered and airy run, and another great ball from his colleague Kamau saw Majok run free in behind.

His heavy touch actually took him past Moss, who dived in vain, but it also forced Majok too wide to do anything other than curl the ball across the face of the open goal. If a debut can be both promising, and filled with conspicuous calamity, then that’s what Majok’s was. His off-the-ball running was phenomenal.

The game was frantic, and as a result it was a shock when one looked up and saw the 90th minute approaching. Newcastle had long since clutched their narrow lead close, and now were working solely on the counter. A very late surge, after Baumjohann had given the ball away with all of his teammates up in the Newcastle half pushing for an equaliser, saw Vargas score a sealer. Petratos had done most of the counter’s work, running hard into the box, and having skipped past a defender he selflessly squared it for Vargas to convert. The final whistle went.

How frustrating this must have been for Western Sydney. Not only were they forced to play in a shabby, untended, adopted home, but they had played well enough to score at least three goals, and yet scored none. “If you have these kind of chances, you have to score … we need many chances to score goals,” Markus Babbel said after the game. Newcastle will relish their first win of the season, but will leave Western Sydney knowing they were lucky.

With the season postponed, here’s a review of the Newcastle Jets’ 2019-20 season.