When does kids sport become too much?

We all want our kids to be healthy, and sport provides an obvious way to burn off all that excess energy and maintain healthy bodies and minds in our kids.

It’s also important to introduce our children to sport early, to establish good habits for the rest of their lives and to have a positive outlook on physical activity.

A 2017 study published in ‘Pediatrics’, the official journal of the American academy of pediatrics (“Childhood Sports Participation and Adolescent Sport Profile” by F. Gallant, J. O’Loughlin, J. Brunet, C. Sabiston & M. Belanger), concluded that sport sampling should be promoted in childhood because it may be linked to higher physical activity levels during adolescence.

However, in today’s environment of rep teams, private clinics and increasingly high-profile (and rich!) superstars that our children are aspiring to become, when is the amount of sport they are playing too much?

Maybe your kid is the super-sporty one that is picked for every school team. That’s great. It’s brilliant for their self-esteem, and has obvious health benefits.

However, children’s bodies are far from being the finished article, and undue stresses and strains can cause significant muscular and skeletal problems in the future.

We all know that weight training for young bodies is frowned upon, and widely condemned for its potentially harmful effects on bone growth and muscular development.

However, what is less accepted is that over-training in non-weight bearing exercises can also be detrimental, both physically and mentally.

Malcolm Gladwell’s famous ’10,000 Hour’ rule has been endlessly rolled out for years as the benchmark by which youth development in sport is measured.

If you want to make it, you’ve got to practice. A lot. That’s basically the premise.

In a meta-analysis of 88 studies on deliberate practice, the researchers found that practice accounted for just an 18 per cent difference in performance in sport.

This suggests that if you are one of the few that has the ability to make it at elite level in the sporting arena, that excessive training alone is unlikely to be the difference between success or failure when taken into consideration alongside other factors, such as coaching quality, strength of competition, mental resilience, nutrition, injury prevention and good old-fashioned luck.

This leads us back to the issue of what our children are doing on a normal basis in our communities.

How often do we hear of children being picked for a ‘rep’ team, when inside you know these kids are just run-of-the-mill average players? Basketball and soccer are particular culprits here when it comes to over-loading players with meaningless competition just to swell their own coffers.

In my opinion, if you are not in the first squad, then surely you are not getting significant benefit from traveling from suburban Melbourne to Moe or Ballan on a weekday night to play a third-grade game?

Kids are made to feel that they are missing out if not involved in this. My daughter is an average domestic under-12 basketballer. She enjoys the social aspect of the game, but is never going to play WNBL, and doesn’t want to.

The amount of times she has been asked to play ‘rep’ basketball because they were a few players short was incredible.

So much for being an elite competition – more like an elite moneymaking machine!

Soccer is even worse, with pushy parents (dads, in particular) living vicariously through the children and sourcing expensive private clinics in addition to their club football in vain attempts to help little Johnny crack the big leagues in Europe.

Having spent a decade working as a soccer agent, and a further two years inside another major sport, I can honestly say without fear of contradiction that great players are born, not made. You can polish a diamond, but not a log.

Instead, focus your time, money on attention on ensuring that child enjoys their leisure time. If you can’t tell if you are dealing with a log or a diamond, seek an independent assessment from someone that has no financial incentive to see a gem.

I deliberately said ‘leisure’ and not ‘sport,’ because diversity is the key here. Don’t just train for basketball or footy twice a week, and then play a game the weekend.

Encourage an instrument, a language – maybe book club or an environmental group.

If it has to be sport, then at least try and break it up – train once and play once, and break it up with something complimentary in between, like swimming or causal hit of tennis, or a bike ride.

If your team won’t support this approach, find another more accommodating club – don’t let them dictate your child’s wellbeing (or lack of!).

Your child may really want to play lots and lots of sport. To this I say, they may want a pony and a jet ski too, but they don’t get this, do they? Don’t let the tail wag the dog!

If your kid happens to be the next Elysse Perry or Tim Cahill, then by all means, go ahead and support them all the way.

But make sure of a few things first;

In these times of increased mental anxiety amongst young people, it is important that we acknowledge the pressures that modern society is placing them under, and to try and alleviate them rather than add to them.

Our obsession with ranking, with overloading and “testing and evaluation [sic] which becomes increasingly intense with every passing year—is a system that very clearly substitutes extrinsic rewards and goals for intrinsic ones. It is almost designed to produce anxiety and depression” (Dr. Peter Gray, Psychology Today, 2010).

Canada defeated Haiti 3-0 in their World Cup qualifier but it was this effort by goalkeeper Josue Duverger that’s gone viral. Just after half-time Duverger took a back pass a little too casually and he then searched for a hole in the ground to hide in. 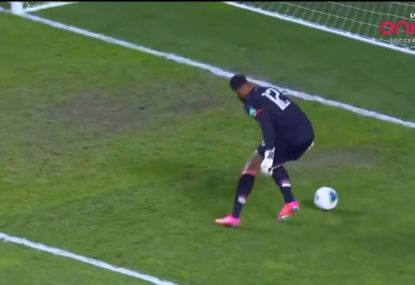 The Matildas have battled out a goalless draw with in-form Sweden to boost their morale heading into the Olympics next month.

The Socceroos maintained their perfect World Cup Qualifying record with a 1-0 win over Jordan. 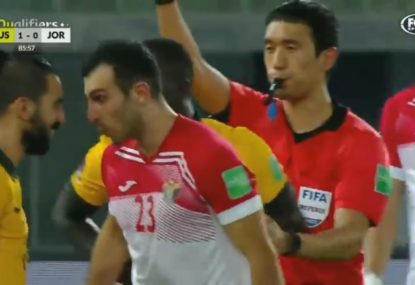