The pressure was mounting on the 36ers following a four-game losing streak and coach Joey Wright made the difficult call to cut import point guard Adris De Leon despite his long-time close relationship with him dating back to their first team at the Gold Coast Blaze.

But Wright knew his team needed a change and required a boost which is where the signing of last year’s runner-up in league MVP voting Conger came in.

Conger hasn’t necessarily done a hell of a lot on his own in his first two matches, but it has been the kick up the backside the rest of his new Sixers teammates needed to deliver two dominant and emphatic performances.

The 36ers came from behind to beat the Illawarra Hawks by 25 points last week and then this Friday night controlled the contest most of the way against the Cairns Taipans to win by 14.

That sees them now head to Wollongong on Sunday to play the struggling Hawks with plenty of confidence and momentum before the general bye for the league due to the FIBA break to allow for the playing of another set of World Cup qualifying matches.

Two weeks ago the 36ers just needed a win, now all of a sudden they are full of confidence once more and when they are playing like that, attacking the rim, allowed to play at by far the fastest pace in the league and get that momentum going, they are quite the force.

With Nathan Sobey running the point and having the likes of Ramone Moore, Conger and Jacob Wiley especially alongside him who all love to push the pace and get to the hole, it’s quite the spectacle.

In a lot of ways, they were able to do as they pleased in that regard in Friday night’s home win over Cairns with Wiley putting on quite the show on his way to his best night in the NBL with 30 points on 12/17 shooting from the field.

But with Anthony Drmic finding his shooting touch too with 18 points on 5/6 from three-point range with Sobey and captain Daniel Johnson combining for 18 points, this Adelaide team is now building momentum nicely and it’s going to be tough for the Hawks to stop them on Sunday.

Obviously going on to play that way against top teams like the Perth Wildcats, Melbourne United and Sydney Kings is the next step with this new line-up boosted by the presence of Conger, but there’s no question the rest of the league will now know the Sixers are a real title threat again. 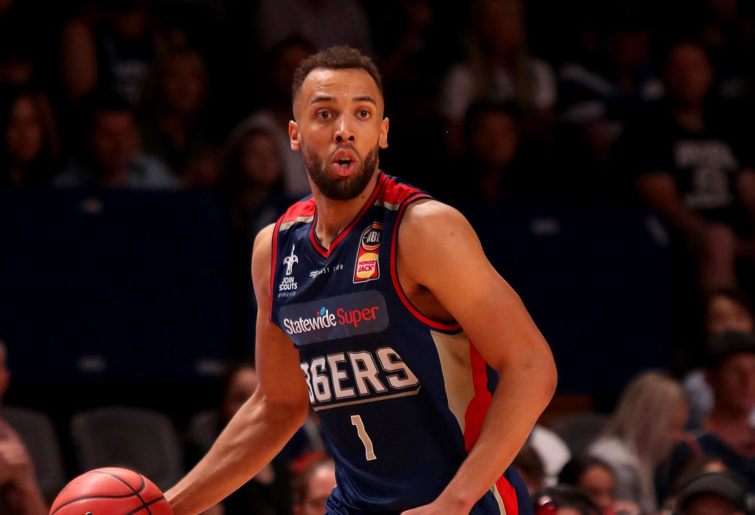 (AAP Image/James Elsby) NO ARCHIVING, EDITORIAL USE ONLY

While Sobey, Johnson and even rookie Harry Froling have had breakout games already this season for the 36ers, Friday night was time for Wiley and Drmic to further highlight just how many weapons the team has.

Coach Joey Wright was happy for the pair but never doubted that his team could get back on track even when on the four-game losing slide.

“Guys like Drm, he feels like he is missing too much but he’s the sort of guy who can just keep shooting. He’s getting his averages back up and getting some shots down over the last couple of games,” Wright said.

“It was just outstanding to see Jacob play like that. I love to see his emotion out there on the court with a lot of the little things that he’s doing. There’s obviously the big dunks that everyone sees but he’s also getting some deflections, chasing some guys down and doing all those little things.”

While the last two games have been impressive for the 36ers, Wright is fully aware of how important it is to continue their momentum on Sunday on the road to the Hawks.

“Right now we’re still 5-6, that game on Sunday is going to be a tough game they’ve lost a couple and they’re going to be battling, it’s still a long season,” Wright said.

“I would love to, we want all the momentum we can get, good things are happening we can build on that positive energy, we know what’s good about us and know what’s bad about us. We got a tough game this weekend on Sunday so we gotta get ready for that.”