England loss confirms Wallabies are no closer to RWC success

So it’s official. In losing a ninth game from 13 Tests in 2018, the Wallabies have now posted their worst season ever.

Only twice in history have the Wallabies lost nine Tests in a season, and this current squad is responsible for both of them, in 2016 and 2018.

Among the Wallabies’ five worst seasons in the history of the game also sit the eight losses recorded in 2005, and again in 2013; Eddie Jones was moved on in 2005 and Robbie Deans didn’t see out 2013.

There are no signs that’s about to happen to Michael Cheika, though the discontent is unquestionably gaining volume.

However, such is the timeframe now – Australia won’t play another Test until next July – that installing a new coaching team so close to next year’s Rugby World Cup would almost certainly write off any chances of tournament success in Japan next September and October. And therein lies the conundrum for Rugby Australia.

What can it least afford – to do something, or to do nothing?

Whatever the answer to that question, it’s clear that the methods employed in 2018 have delivered nothing. The Wallabies are effectively in the same place they were at the end of the hapless 2016 season, which in turn seemed so far removed from the highs of the 2015 RWC Final.

Right now, the only straw available for Wallabies fans to clutch is that after the lows of 2016, the Wallabies played some surprisingly good rugby in 2017, and indeed, showed that it could combine a strong set piece and forwards-led game with sharp attack.

Like the 2015 RWC Final, this similarly feels like a long time ago, with the Wallabies forgetting all that this season to round out the year scoring just 2.3 tries per game in crossing the stripe just 30 times in 13 Tests.

The loss to England, then, was essentially the perfect summary of the Wallabies’ 2018 season.

A scrum that went backwards from the first whistle was followed by a breakdown presence that lacked all game and no more so than in attack. When the Wallabies did have the ball, there was no evident pattern or shape or even any intent that suggested they knew what they were trying to achieve.

In short, a team that struggled to make the gain line was forced to rely on rare moments of individual brilliance to do anything of note. Parity in the lineout was the only element of the game that the Wallabies did well.

It’s hardly the foundation to take into a RWC year, yet that is exactly the point the Wallabies will be starting from next July. It’s a sobering way to start an international season.

Watching the game on Sunday, and even after the event now, all I can think of is this: where is this Wallabies squad up to right now?

Clearly, Cheika has no intention of standing down and equally, Rugby Australia are showing no signs of moving on him on before the RWC anyway.

Cheika was asked to present plans for the Wallabies to the RA board after the completion of The Rugby Championship and before the Spring Tour, and whatever he presented was enough to convince them that his plans for the team would produce better results before the year was out.

But losses to Wales and England have proved that the team is no further advanced than at the completion of TRC, which in turn showed no progress through the southern hemisphere tournament, and which in all honesty took backwards steps from the Ireland series in June.

There was much discussion at the time for a ‘Director of Rugby’ type of appointment to work in conjunction with Cheika and his assistants, but Cheika was able to resist this idea.

I’m not sure he’ll be able to resist it any longer. If Cheika is indeed delivering the right messages to the team, it’s very debateable that they’re being comprehended. If the same voices aren’t getting through, then a different voice is surely needed.

And a different voice is surely needed around the selection table, after Cheika’s final team selection – even if somewhat forced by disciplinary issues – produced the most puzzling of all the puzzling selections in 2018. Such has been the inconsistency and general bewilderment around selections this year, that no-one really knows what the best side comprises now. That’s hardly the position you want, ten months out from a RWC tournament.

And what of the players? Where are they currently?

A couple of players – senior players at that – choosing to ignore the team’s own standards on tour isn’t a great sign. Neither is news of that decision making its way to the leadership group.

The leadership group then sitting on said news until after the easiest game on tour before taking it to the coach so that action be taken looks even worse. Who trusts who now?

But maybe the biggest question is around the way forward from here?

The Wallabies themselves set the goal of three Spring Tour wins, and tripped up at the first hurdle in Cardiff. 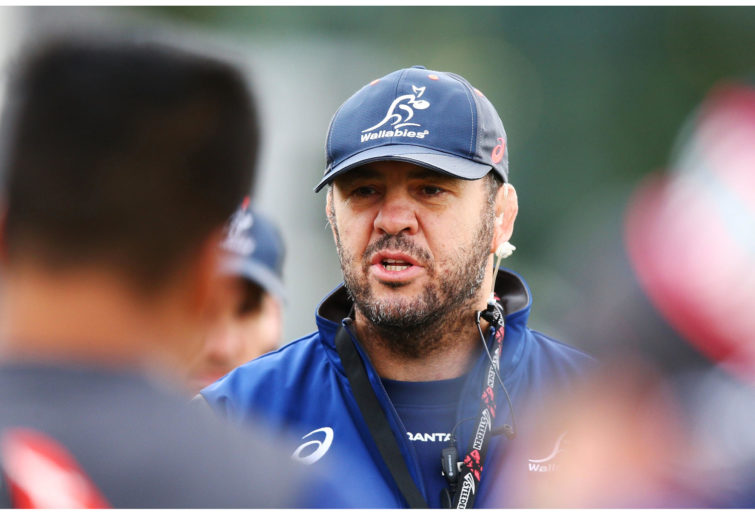 So from this point in the RWC cycle right now, what does success in Japan now look like? Is it still making the Final? Is it making the Semis? Is it just getting past Wales and French giant-killers Fiji in Pool D?

Even with Joe Schmidt announcing overnight his intention to step down as Ireland coach after the Cup, I’ll be stunned if Michael Cheika is removed as Wallabies coach at the Rugby Australian board meeting next month.

But gee, I’d be intrigued to hear how on earth he plans on getting the side out of this deepest and darkest of holes before next September.