The Australian sporting landscape has maybe never seen a more divisive character than Anthony Mundine, an Indigenous Australian who happens to also be an adherent of the Islamic faith, while cultivating the self-proclaimed provocative persona of ‘The Man’.

Does this identity conflation make modern Australia and the sporting arena feel more than a little uncomfortable? You bet, and the problem may not be with Mundine but the vulnerability of a nation that may know what it is but not who it is as a multi-ethnic community with a First Nation heritage.

Mundine has utilised his public profile as an immensely talented sportsman, whose formal education ended at year 12, to speak out on social issues, especially with regards to Indigenous affairs and perceived omissions within Australia’s national narrative.

Now, the 43-year-old is again agitating our national psyche as he readies himself for his latest and possible last sporting contest with Jeff Horn at Lang Park on November 30th.

The Horn camp has accused Mundine of a lack of promotional activity in the lead up to the fight and skipping out on his duties.

Such a claim almost seems an oxymoron when the billing of an event contains the name Anthony Mundine in this country.

Standing small within the Australian political landscape but on the shoulders of a boxing giant such as Muhammad Ali, Mundine is aware of the horrific incarceration rates of his First Nations People and unashamedly speaks into that forum, even attacking politically mobile figures from his own family such as Warren Mundine as “fighting for themselves and their pockets. Not for the people.”

It’s interesting how much the stereotypes that infiltrate the popular memes of what it is to be Australian, do not like an Aboriginal Muslim man speaking back.

This is someone whose consciousness was nurtured growing up in his country of birth being pulled over by police because he was a young Aboriginal man driving a new car when contracted by the Brisbane Broncos as a 19-year-old rugby league prodigy.

What it has developed in him is a heightened sensitivity towards those who are ‘othered’ in modern Australia; whether it be troubled fellow brothers or sisters from within the sporting context, or the stance of nine-year-old Queensland school girl Harper Nielson refusing to stand for the national anthem earlier this year.

That’s ‘the man’ that many do not know – the man that leads a life of strict noble adherence to his faith, a proud Aboriginal man who in private is humble and softly spoken.

A man who initially planned, to train in preparation for the fight with Horn, away from the limelight at Roy Jones Jr’s facility in Florida but returned home stating, “I didn’t feel right there. When you have that sixth sense, you’ve got to come home. Now I’m home, it feels good.”

What has since transpired is an interesting adversarial war of words that mimics the Australian cultural and political landscape.

In an intriguing build up to the fight, Mundine feels Horn is a protected species, something he cannot avoid because of the image that has been built around him as the wholesome all-Australian ‘nice guy’.

He, physically, is commodified and caricatured to mirror, by his minders and those in power, ‘white privilege’, a phrase that infuriates the anti-Mundine lobby but which is often wilfully misunderstood.

Mundine himself stated, “I’ve got nothing against white people, I’ve had a lot of love from white fellas. I’ve got a lot of white mates who understand the plight. It’s the system that frustrates me”.

Mundine, for all his lack of formal education, gets this and he deflects the power imbalances built around ethnicity with inflated verbal output that maybe reveals more about the responder than Mundine.

Whether he wins or loses against Horn, his claim as always goes a little deeper than just pre-fight ego to suggest that his quality as ‘a man’ as well as a 43-year-old boxer, will tell in the end when the two meet at Lang Park.

“I’ve been promoting this game, I’m the heart of this game. I’ve been the heart for 20 years. The most part of two decades”.

On the other hand, Jeff Horn’s historical win over Manny Pacquiao in 2017 for the WBO welterweight championship catapulted the almost anonymous former Brisbane schoolteacher into the limelight and sporting iconography of Australia.

Before long, he was wearing the Australian underdog tag, a tag Horn wore proudly, connecting him to the sporting community in a way that tapped into the fabricated mythology of mateship and modest laconic, easy going self-deprecating spirit that we like to think sits at the core of our nurtured fair go ethos that eschews the tall poppy syndrome.

Mundine has never enjoyed such widespread respect and love from the Australian community and acknowledges that Horn’s team have done a great job in manipulating his rise by tapping into constructions of identity that serve those in power.

Horn’s last fight against American Terence Crawford ended in defeat via a technical knockout, yet trainer Glenn Rushton claimed that if the fight had gone on one more round Horn would have won.

Rushton is the ‘cultural face’ of the Horn camp and it is he who makes the inflammatory statements that, at times, go too far in their commentary on Mundine as his recent homophobic slurs suggested. 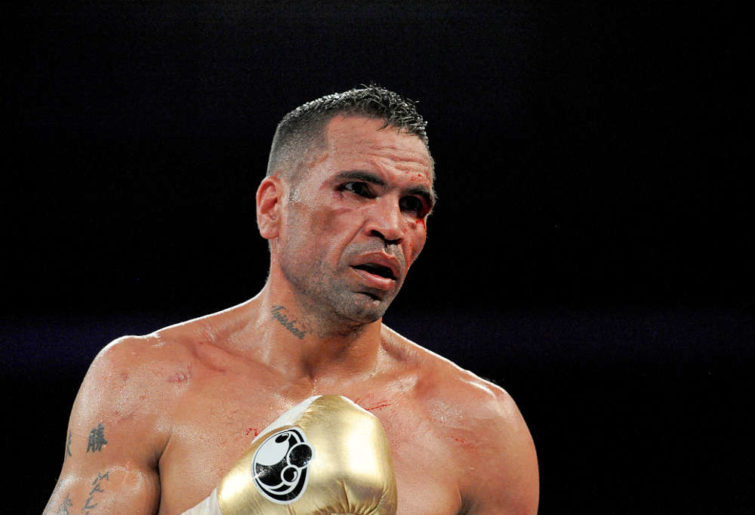 Yet the Horn camp remains untainted surrounded by a ‘cultural ring’ of confidence because they mirror back to the Australian public how we want to see ourselves and not as we are.

Mundine’s response to Rushton’s claims around Horn’s misfortune during the Crawford fight were to suggest that he is delusional but, interestingly, Mundine is full of respect for Horn.

“The kid is good and he’s a hard worker but when you’ve got someone with talent, skill and the hard work, it’s another level of animal”. Mundine does not back down, but he also moves in directions that professional sport often wishes to turn its gaze away from, even though, in many ways contemporary sport is very much a media animal, political and voracious.

Such an animal as the media, where the medium has become the message, demands to be fed. So the upcoming fight has also provided a platform for Mundine to again challenge the social heartbeat of Australia and most poignantly the Australian National Anthem, which Mundine has stated he will not stand for.

“It’s not an anthem that is for everybody, I’m not saying this to stir **** up. I’m saying it because its real.”

The national anthem debate storm of 2018 came to a head when nine-year-old Brisbane schoolgirl Harper Nielsen refused to stand for an anthem that she claimed failed to acknowledge Indigenous Australians.

Personalities such as One Nation leader Pauline Hanson and radio shock jock Alan Jones criticised Harper for her stance but Mundine believes she understands, “The plight, the struggle, the constant everyday injustice to Indigenous people.”

Horn stated he had no issue with Mundine’s stand on the anthem but hoped he would join him in the ring, “I respect Mundine, I respect his culture. I would stand and honour whatever Anthony wants there on the night.”

The fight certainly will encapsulate not only a great sporting event but one that will challenge the very social fabric of a nation which is still to reconcile its history.

Mundine, hate him or love him, has been a phenomenal athlete for more than a quarter of a century but believes he will never be given due credit for his achievements.

“I’m an Aboriginal Muslim and they don’t like that. On top of that, I speak my mind, They really don’t like that… I don’t care if you’re black, white, brown or brindle. I’ll take you on your merit, your heart, your character and how you treat your fellow human beings”.

The national anthem debate has provided a catalyst regardless of what side of the argument you may stand with, for we are all left sick at heart if we fail to hear the cry of our nation from its First Nations Peoples’ foundations and integrate it with the full and true legacy of its British colonisation and its multi–ethnic post-WW2 migration history.

For the present, we will have to settle for something less but nevertheless a spectacle hopefully worth watching: a boxing match between two men, one consciously and the other perhaps less consciously, representing the gap we still need to close before we are truly a modern nation of worth beyond our property prices.