Where to next for the Wallabies?

Excuses abound. Where do we start?

We don’t have the player depth, so our best players are battle fatigued. New Zealand has the luxury to pick from its four cracking Super Rugby teams.

Our backyards are smaller. Australian backyards have been sliced and diced. There are seven-foot fences around most schools these days, which mean far more barriers for kids to play sport. We are a fat nation. But, heck, we are better on the smartphones and gadgets.

We have forgotten how to kick. Arguably the most potent weapon to win a world cup is a sharpshooter. When we won in 1999 we had John Eales, Matt Burke, Ben Tune and Stephen Larkham. Where are our sharpshooters these days? Where are the likes of Tune’s precision bomb, then run, chase and collect? Ireland pulled a Ben Tune against the All Blacks on the weekend.

Where is the next Eales with a long-range boot, or our Matt Burke with the ace in the hole? Then there was Mr Miracle himself, with a freakish Larkham drop goal. Here are a couple more names: Dan Carter and Johnny Wilkinson.

We don’t take risks. From top to bottom the entirety of Australia is paralysed with fear. We are taught by conservative coaches to play conservative footy. Don’t chip and chase or grubber; no, that’s not footy. Not so in New Zealand – they chance their arm. And now Ireland have the kick chase down pat.

Players don’t hold their position and can’t get the fundamentals right. Wallabies vs England, two-on-two and just five metres out – that’s just one man each. No winger comes off the line to help out a fellow player, who is slow to come off the line. England try. Hair being pulled out.

Come on, get it right, lads – that’s a gimme. And start at schoolboy level. No, scratch that – teach them at under-7s about fundamental backline positional play. Do you think a New Zealand player would be caught out of position like that these days?

There is a player roundabout. How is it the Reds halves are now playing in Melbourne? How did this happen? Seriously? Digby Ioane, a cracking outside centre, ended up playing for the Crusaders. Yes, there is a player drain overseas.

There is a constant attack on coaches. Ewen Mackenzie is 100 per cent a legend. Haters get stuffed. Michael Cheika’s a legend. Eddie Jones? Kegend. Yet only one of these coaches remains coaching in Australia, and none of them are coaching Super Rugby teams. Forget the player drain, what about the coaching drain?

We don’t have the money. Rugby lost the war with rugby league and AFL long ago.

Invoke 1999 World Cup-style kicking. Kurtley Beale, kick and chase like Ben Tune. Reece Hodge needs a long-range boot like John Eales, but in the style of Jonny Wilkinson. To win a world cup Reece Hodge must play flyhalf. He is the only man who can kick far enough. England won in 2003 with two-kick territorial plays. This is undoubtedly the approach we must go with. 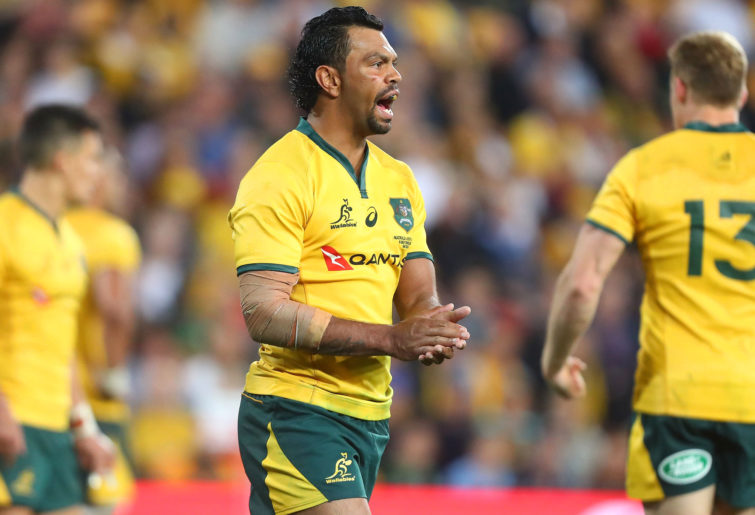 The first kick from inside 20 on one side of the field speared two-thirds up the field to the opposite corner of the ground. Opposition lineout. Once the ball turned over. Pumped into the danger zone five to ten metres out. Opposition lineout, and a chance for us to pounce.

World cups are about high pressure, and you want the opposition to be under pressure for the better part of the game.

Bernard Foley stays in team for goal kicking but not as flyhalf. Foley goes to inside centre, the same as Elton Flatley did when he went kick-for-kick against Jonny Wilkinson in 2003. Unless a sharpshooter arises in next 12 months, lock these players in as our boots.

While we’re at it, hold a kicking competition with every Australian player and have the best boots make the Wallabies, plain and simple. Then rattle this concept down to under-7s to futureproof the Wallabies. The running rugby motto becomes: Kicking boots win world cups.

Next: Player fatigue. Rest them, for crying out loud. Who gives a stuff about Super Rugby in a World Cup year, unless of course it is the Reds. Keep eyes on the prize. David Pocock and Michael Hooper can be firing next year if we get our priorities right.

Finally, fix the coaching strategy. After the world cup bring Cheika back to the Waratahs. Send Larkham to the Brumbies. Put Mackenzie with the Rebels. They don’t have to be the rspective head coaches, though it would be great if they could be. Put them in a position of authority so the best is extracted from the Super Rugby and NRC teams.

In 2019 the Wallabies have a cracker world cup draw. It can be done.