The appeal of big clubs is as strong as ever

After being selected with pick one in the NAB AFL Draft last Thursday night, young gun Sam Walsh was, in his own words, ‘stoked’ to be joining a club like Carlton.

While this was a reoccurring line used by all the young men drafted on Thursday night and Friday afternoon regardless of the club that picked them, it’s interesting to ponder exactly what Walsh means when he says, ‘a club like Carlton’.

As most football fans are aware, Carlton have been one of (perhaps the) most successful teams of the first 160 years of Australian rules football, and as such are considered to be one of the blue bloods of the league (no pun intended).

But despite being around seemingly since the first oddly shaped Sherrins were kicked around the inner-city grass fields of old Melbourne town, the current reputation of the old dark navy Blues is very different.

To anybody born in the last quarter of a century, raised eyebrows and snickering have been the default reactions to anyone proclaiming their pleasure of joining the most disappointing football team of the modern era.

Despite their recent history of on-field incompetence, there is still a mystique that perpetrates around clubs like Carlton, as well as the other members of the AFL’s ‘big four’, Collingwood, Essendon and Richmond.

It’s a phenomenon that is not easily articulated or understood, and it is something that is even more elusive for start-up franchises to comprehend and emulate.

There’s an aura around certain clubs that stays attached for decades and generations, and it’s likely the key reason these teams remain in the prime time slots each weekend, irrespective of their current ladder position – although Carlton’s dream fixture in 2018 can probably be put down to an oversight by the AFL that they later tried to justify rather than rectify. 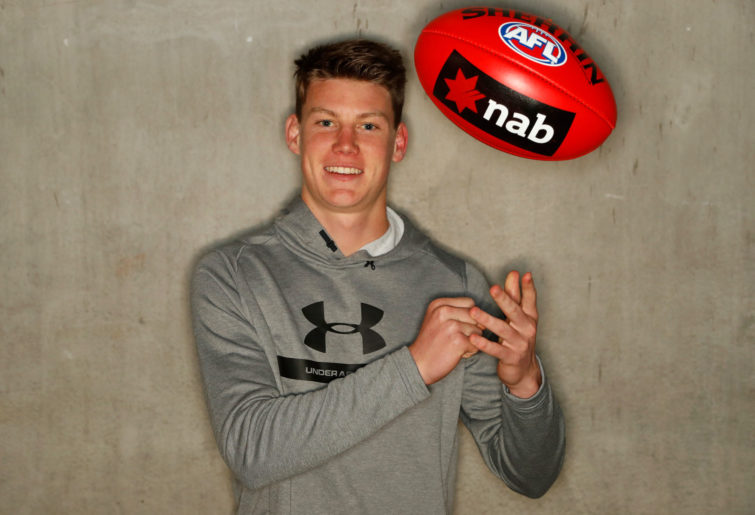 Sam Walsh poses for a photograph during the AFL Draft Combine at Marvel Stadium on October 4, 2018 in Melbourne, Australia. (Photo by Michael Willson/AFL Media/Getty Images)

Every professional sports league has them.

The English Premier League has Liverpool and Manchester United. The NBA has the LA Lakers and the Boston Celtics. Major League Baseball has the New York Yankees and the Boston Red Sox, and the NFL has the Dallas Cowboys and the Pittsburgh Steelers (among others).

All these teams/franchises have the same mystique, the same allure that makes them so attractive to young players entering their respective sports that can often override seasons and decades of poor performances.

Compare this, unfairly may it be, to teams that don’t possess such a supernatural quality.

Being drafted to the Suns is a lucrative opportunity for young footballers to live out their dream of playing in the big time. And as nice as the idea of living in Surfers Paradise is, that’s about all they have to offer at the moment.

When having this chat with a friend recently, it was hypothesised that perhaps the Suns will need another 50 years to create an identity in the league comparable to that of some of the big four. But imagine what another 50 years would do to the already enormously prestigious reputations of clubs like Collingwood and Carlton.

It’s of course a massive advantage these foundation clubs will always have over current and potential expansion clubs.

And you know what? Though we may chuckle when players are drafted to perennial underachievers, I’m with new Blues midfielder Sam Walsh.

I’d also be stoked to join a club like Carlton.