Wilder vs Fury ends in a controversial but fitting draw

In front of a sold-out Staples Center in Los Angeles, Deontay Wilder and Tyson Fury put their perfect records, the WBC and Lineal championships on the line.

The undercard built excitement in the crowd with Joyce getting a first-round KO against Joe Hanks, Ortiz winning by TKO in the tenth against Kauffman and Hurd also winning by knockout in the fourth round against Welborn.

With ring walks more extravagant than Wrestlemania, both fighters left their mark on the near-capacity crowd. Both fighters being equal parts cheered and booed.

Wilder opened with strong boxing taking the early rounds while Fury was held back by his low output.

After warming up, Fury found his distance and made it really hard for Wilder the remainder of the fight.

Wilder landed some huge punches during the 9th and 12th earning knockdowns which brought him back into the fight.

No one will ever know how, but everyone will admire Fury for how he got back up off the ring. A clearly close fight brought a split decision draw, which is fitting for two of the best heavyweights today.

After seeing Ortiz’s form on the undercard and knowing Anthony Joshua is also around on the other side of the Atlantic, the heavyweight division is well and truly alive again.

Round 1
Chants of USA drowned out the arena as both fighters started feeling each other out. Wilder found his distance early and lunged for a big KO that didn’t land. The overhand right missed.

Fury turned Wilder into the corner and tried to land a right, as a result he ate a left from Wilder which backed fury up to the other side of the ring.

Wilder landed more body shots and jabs through the round but Fury won the late skirmish. He may have stolen the round. Wilder 1-0.

Round 2
The fighters were less hesitant to initiate this round. Wilder leading with the jab and finding it three times to Fury’s one.

Backing Fury into the corner Wilder went to the body then used a left hook as Fury exited which was blocked. Fury landing on the gloves a lot and taunting. He landed one jab and appealed to the crowd.

Wilder lands a soft right and gets tangled up. The ref separates. Wilder lands a big right which Fury tries to reply with a left but doesn’t get as much on it as he hoped. Wilder 2-0.

Round 3
Wilder holding off engaging in the third hoping Fury will come forward. Fury tries to snap a jab at Wilder but eats a big one rocking his head back instead.

Wilder gets Fury against the rope and lands a big left to the body then moves Fury to the other side of the ring for a right to the body.

Fury ties it up in the corner and the ref separates. They both clash on the bell, Fury hitting Wilder’s arm while Wilder lands on Fury’s head. Wilder 3-0

Round 4
It looks like Fury has his distance sorted now. Wilder misses his jabs and eats a right pushing him off balance. Wilder sneaks a left in but Fury looks unphased.

Fury jabs twice into Wilders gloves and misses a third. Wilder lands a jab and avoids Fury’s but he can’t seem to line him up. Fury Round. Wilder 3-1.

Round 5
Wilder lands a jab to the body, Fury shakes and feints a lot but Wilder doesn’t seem to flinch. Fury sees a huge hook and ducks it.

Fury lands a jab and wilder returns one to the body. Fury taunts and then jabs to the body and lands between the gloves upstairs. Wilder misses a big right. Fury round. Wilder 3-2.

Round 6
Fury jabs in the gloves again then slips Wilder’s jab. Wilder throws. Both fighters move without landing a lot.

Fury finds the body again, Wilder’s left eye is starting to swell. Both fighters took this round off but Fury landed three more. 3-3.

Round 7
Wilder lands a soft left and avoids two lefts from Fury but eats two rights and gets staggered. He starts chasing and swinging wildly. I can’t tell if he is hurt or angered.

The fighters tie up in the ropes and are having words to each other. Wilder lands a jab but so does Fury which is then followed up with a right to the body.

Fury jabs then ducks and weaves around Wilder’s power punches. Fury round. Fury 4-3.

Round 8
Wilder starting to move and wiggle but he can’t seem to connect anything besides his jab. The storyline continues, Fury seems to be landing some nice rights and Wilder can’t land his big shots.

Fury backs up to the corner and Wilder lands a big left. He may have stolen the round. Fury 5-3.

Round 9
Wilder lands a right and another and Fury goes down. He beats the count and Wilder comes charging in. He eats a left for his sloppiness but he’s determined to try and finish it.

Fury seems to be ok and is finding his distance again. Wilder Round. 5-5 (for the knockdown).

Round 10
Fury comes out more active landing the jab and cutting Wilder’s guard with the right. Fury lands an uppercut and a right on the guard which makes the crowd erupt.

Round 11
Both fighters missing a lot in this round. Wilder moves in and eats a straight then another as he backs out.

Wilder tries a hook and misses but Fury looks hurt from a body shot. Fury lands a left hook and taps a right hook as they lock up. Wilder round 6-6.

Round 12
Wilder lands a jab to the body but reacts to Fury’s feints. Wilder lands a huge combination but Fury makes the count, the referee lets it continue and Wilder goes crazy!

Multiple hooks. The ref separates them. Fury is backpedaling with a high guard now. Fury lands a short right which rocks Eilder.

Wilder is clinching! Wilder is hurt and eating rights and lefts! Both fighters survive. Wilder round. My final score: 114-112

Boxer slammed for some of the worst acting we've ever seen

And boy, did it backfire! 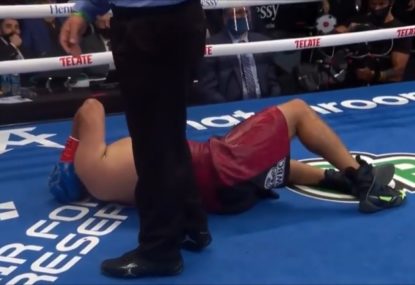 Boxer slammed for some of the worst acting we've ever seen