The Dees got smashed in the offseason, not just with the players they lost to expansion, but with the announcement from Daisy Pearce that she’s pregnant with twins. But despite getting smashed, they still look awfully good on paper.

Tyla Hanks is one of that new generation of Victorian midfielders who will probably surpass the likes of Pearce, Karen Paxman and Elise O’Dea in time.

Whether she can do it in her first season as an 18-year-old is another question, but whatever the answer, Hanks is a genuine gun — small but nimble and strong, with some of the best disposal and vision you’ll see on a football field.

With her comes Maddy Brancatisano, who’s athletic and hard at the ball, and in addition to stars Paxman and O’Dea, the Demons still have Ashley Guest, speedster Cat Phillips on the wing, and Maddy Guerin who only got one game last season, adding up to one of the deeper midfields in the competition.

It lacks the same experience that it had with Pearce, but with the addition of Hanks in particular, it won’t have lost any class.

The Dees backline looks pretty good too, despite the loss of Laura Duryea and Anna Teague — Tahlia Radan is a very good replacement from Brisbane, Meg Downie is a very good key defender, and Bianca Jacobsson is one of the best intercept markers in the competition.

Up forward, Melbourne have Tegan Cunningham, easily the best tall forward in the country despite having only played one season.

Cunningham had games last year where she could have kicked eight or nine if she’d just hung onto every mark, and maybe this year she will.

Youngster Eden Zanker is also tall and inexperienced, but with massive upside.

AFLW teams have had more notable success with small forward lines than tall ones, but possibly this is more the fault of weak AFLW midfields and their poor disposal than it is of the existing tall forwards.

Melbourne have always been better than most at delivering the ball, and if both Cunningham and Zanker start catching what lands in their hands, Melbourne could kick a lot of goals this season. 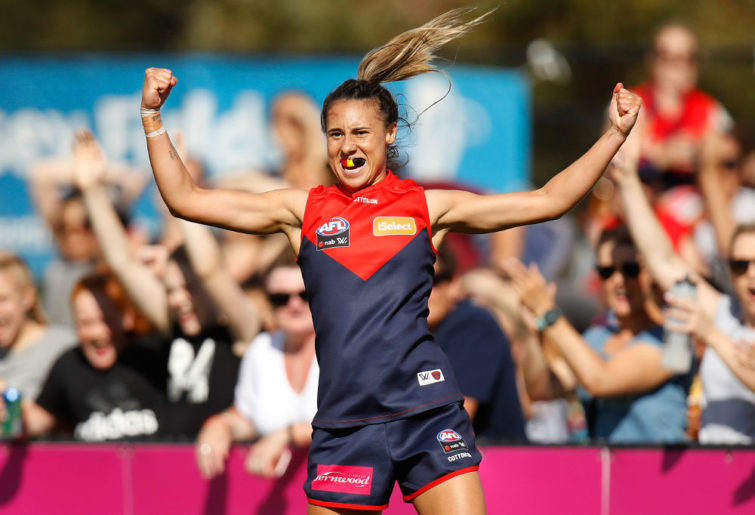 But despite their talent, there’s no question that Melbourne’s great strength — their midfield — has this year been brought back to the pack.

Teams that last year had weak midfields aren’t looking so weak any longer, and the teams with strong midfields, like GWS and Adelaide, have only gotten stronger.

This season Melbourne’s mids will need to contend with pressure like they’ve never experienced before, and on some big past occasions they haven’t handled it well.

Without that midfield dominance, a tall forward line that relies on accurate delivery could find itself starving for the ball, and while Melbourne’s backline is solid, it’s not spectacular.

Added to which, the Demons have been under achievers in the AFLW so far, possessing arguably the most talented lineup in the first two years but contriving to miss Grand Finals by losing matches they shouldn’t have.

If they’ve stumbled before when it’s relatively easy, I can’t be hopeful that they’ll do better when it’s harder. Demons to miss the finals by a whisker.