From Michael Jordan’s baseball career to Jarryd Hayne’s NFL dream, hundreds of athletes have tried their hand at a second discipline. Admittedly, the level of success has varied greatly, with many leaving much to be desired.

For most, competing for your country in any sport represents the impossible dream. For a small handful of lucky athletes, their talents extend beyond their chosen sport and into a second event – extending their careers and enhancing the legacy they leave on the sporting world. So, here are the stories of five of the greatest dual-sport athletes to have ever graced the sporting landscape.

Jim Thorpe
Most Australians have never heard the story of American Jim Thorpe, but he undoubtedly ranks as one of the finest all-around sportspeople to have ever lived.

Thorpe’s career began at college in Carlisle, Pennsylvania, where the Indian-American born student broke several school records in athletics and won the 1912 Intercollegiate Ballroom Dancing Championship. Recognising his athletic ability, the Carlisle football program quickly recruited Thorpe who, playing the positions of running back, defensive back, kicker and punter, scored all of his teams points in an upset victory over the number one ranked Harvard.

Following the inclusion of the pentathlon and decathlon in the 1912 Stockholm Olympics, the versatile Thorpe entered the US Olympic trials and qualified for the American team. Thorpe finished fourth in the high jump, seventh in long jump and won gold in both the decathlon and pentathlon.

Remarkably, the American had his shoes stolen the day prior to the competition and famously won with discarded shoes found on the Swedish streets. When told, “You, sir, are the greatest athlete in the world” by Sweden’s King Gustav V, Thorpe nonchalantly replied, “Thanks King”.

Following his Olympic career, Thorpe joined the New York Giants baseball squad, helping them to the 1913 Major League title. Returning to his football roots, he then signed for the Canton Bulldogs side in the American Professional Football Association, playing for the minuscule sum of $250 per game.

He would later become the first president of the Association, which would morph into the NFL we know and love today.

Israel Folau
Israel Folau’s career has been well documented in the Australian media, but unlike his league-counterpart Jarryd Hayne, Folau’s switch has been an overwhelming success.

A Queensland and Australian Schoolboy prodigy, Folau found himself on the wing for the Melbourne Storm in 2007 at just seventeen years of age. His 21 try tally equalled Matt Bowen for the highest in the competition, and broke the NRL record for most tries in a debut season.

The Storm won the premiership (later stripped) with a 34-8 victory over the Manly Sea Eagles, and Folau was duly rewarded with an Australian and Queensland Origin berth.

Following a short, yet successful stint at the Brisbane Broncos, Israel Folau became the centre of a bidding war between the NRL, AFL and rugby union. He would opt in favour of the GWS Giants, signing with the expansion side for an estimated six million dollars over four years.

While Folau’s AFL experiment is generally regarded as a failure, only lasting two seasons, his publicity played a fundamental role in building the club to its current state.

Following in the footsteps of Wendell Sailor and Sonny Bill Williams, Folau made another switch in December 2012, signing for the New South Wales Waratahs rugby union side. This transition reaped rapid rewards for the fullback, who became the first player to win back-to-back John Eales medals and the third to win two medals in his first three seasons.

Folau’s record currently stands at 38 Tests for the Wallabies and a further eight for the Kangaroos, firmly establishing himself among Australia’s great dual-internationals. Luckily for league and union fans alike, Israel Folau’s best rugby may still be ahead of him as he is only twenty-nine years old.

Duke Kahanamoku
Many recognise Duke Kahanamoku, affectionately known as the Big Kahuna, as the founding father of modern-day surfing. But most aren’t aware of Duke’s accomplished Olympic swimming career.

At his first Olympics in Stockholm in 1912, Kahanamoku tied the world record for the 100 metre freestyle in a qualifying heat before winning gold in the final.

Famously, Duke was so far ahead of the field at the halfway point, he had time to stop, look back and survey the rest of the field. He would return to the Antwerp Olympics following the war in 1920, adding two more gold medals to his tally.

However, as a boy growing up on the beaches of Hawaii, surfing was always Duke Kahanamoku’s first passion. As a member of the Waikiki Beach Boys, the Big Kahuna would often travel the world wowing crowds with his swimming exhibitions, in which he included surfing demonstrations.

His visit to Sydney’s Freshwater Beach in December 1914 is regarded as a groundbreaking moment that led to the formation of Australia’s surf culture and the sport of surfing as we know it today.

Consequently, the Big Kahuna became the first athlete to be inducted into the Swimming and Surfing Halls of Fame, as well as the United States Olympic Hall of Fame. The Duke Kahanamoku Invitational Surfing Championship, now named the Billabong Pro, is held annually in his honour on Oahu’s North Shore.

If his place in this article wasn’t already warranted, Duke competed for the United States at the 1932 Olympics in water polo and made significant contributions to the sport of Surf Lifesaving, cementing his position as one of the best water-sport athletes the world has ever witnessed.

Babe Didrikson Zaharias
In a field consisting of Ellyse Perry, Jana Pitman and Lolo Jones, it would take an extraordinary sportswoman to be named the greatest female multi-sport athlete. Babe Zaharias was certainly that.

Born to a Norwegian family in Texas, Zaharias grew up competing against the boys in basketball, volleyball, tennis, golf and swimming. She acquired the nickname ‘Babe’ when she hit an astounding five home runs in a neighbourhood pick-up game, drawing parallels to cult hero Babe Ruth.

Babe soon garnered significant attention from talent scouts, who convinced her to quit school and take up a professional basketball career.

While her basketball experiment was successful, it was short lived as Zaharias’ attention turned to track-and-field athletics. Competing at the Amateur Athletic Union’s 1932 National Championships, Babe was the sole representative for her employer’s team.

Up against squads consisting of over a dozen members, Babe competed in eight events ranging from discuss to hurdles and won enough events to single-handedly win the competition for her company.

This success continued into her 1932 home Olympics in Los Angeles, winning gold in the 80 metres hurdles and javelin.

In 1934, Zaharias again changed career paths to chase a career in golf. After being denied amateur status, Babe competed in the 1938 men’s Los Angeles Open, becoming the first woman to compete in a PGA event.

No other woman would achieve this feat for sixty-five years, until Suzy Whaley qualified for the 2003 Greater Hartford Open. Between 1946 and 1947, Babe Zaharias won fourteen straight tournaments in what remains today as the longest winning streak in Women’s golf.

As a founding mother of the modern-day LPGA, Babe Zaharias’ life was sadly cut short by colon cancer at the age of forty-five. After winning her last two competitive tournaments, we are left to wonder how long Babe’s reign as the queen of world golf could have extended.

Michael Milton
While he may not garner the media attention of Israel Folau or own global recognition like the Big Kahuna, Michael Milton stands as one of Australia’s greatest Paralympians and dual-sport athletes.

Born into a skiing family in Canberra, Milton had his left leg amputated at the age of nine as a result of bone cancer. Determined to get back on the snow, Milton learned to ski with one leg on the fields of Thredbo, leading to his selection for the 1988 Innsbruck Winter Paralympics.

At the 1992 Albertville Winter Paralympic Games, Milton became Australia’s first winter gold medallist in either the Olympics or Paralympics by taking out the Mens Super-G LW2 event. He furthered this with two medals at Lillehammer in 1994 and a remarkable four golds at the 2002 Salt Lake City Games.

In April 2006, Milton became Australia’s fastest ever downhill speed skier, regardless of disability, clocking a speed of over 213 kilometres per hour. 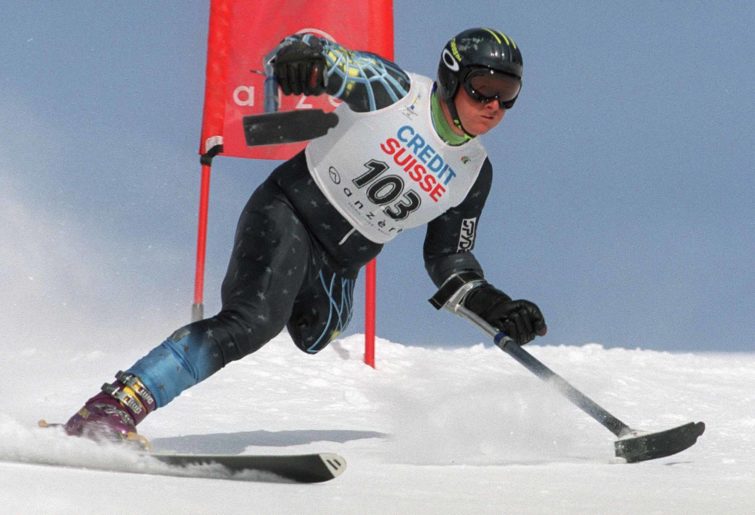 Many believed Milton’s sporting career was over in July 2007 following his diagnosis with oesophageal cancer, but in one of Australian sport’s greatest comebacks, he returned to compete at the 2008 Beijing Paralympic Games.

Since retirement, Milton has climbed Mt Kilimanjaro, walked the Kokoda track twice, competed in two World Paratriathlon Championships including a fourth placed finish and broken the world record for the fastest marathon on crutches. For his inspiring efforts, Michael Milton received an Order of Australia Medal and was named the Laureus World Sportsperson of the Year with a Disability in 2002.