Beautiful one day, perfect the next.

Or, in the case of the AFL franchise located on the Gold Coast: haemorrhaging talent one day, butt of all jokes the next.

This has been the running joke since the AFL made the decision to expand into what has for a long time been considered the barren wasteland of Australian professional sports.

The city of the Gold Coast is littered with failed sports franchises, but perhaps the arrogance that comes with being the number one corporate sports league in the country is what caused then AFL CEO Andrew Demetriou and co. to feel they would be the exception.

Instead, the Suns have been an exceptional disaster.

The Gold Coast Suns have received plenty of concessions from the AFL since the fledgling club’s inception into the league in 2011 – including a support payment of $25 million after a lull in sponsorships in 2017 – though on-field success is yet to coincide with the tremendous financial support afforded by the AFL.

Perhaps of even greater concern is the Suns’ horrendous on-field performances in spite of the their unprecedented access to the nation’s elite talent. Since the clubs’ debut draft in 2010, the Suns have drafted 18 players inside the top 10 on draft night. That’s not the entire first round we’re talking, just the top 10.

Only seven of those players remain on the Suns senior list – ten if you include the newly acquired trio of Jack Lukosius, Izak Rankine and Ben King.

Though quite a few of these now departed players were delisted or traded at the preference of the club, the recent departures of co-captains Tom Lynch and Steven May, young halfback Kade Kolodjashnij and the bizarre delisting of ball winner Jarryd Lyons have further fed into the vicious Suns cycle of ineptitude.

It is this haemorrhaging of talent that makes it impossible for the Gold Cost Suns to begin climbing from the cellar of the AFL ladder, and – coupled with the inability to create an attractive culture in a non-traditional AFL environment – is the reason the Suns cannot seem to get out of their non-enviable rut.

Of course, the one thing that will help the Gold Coast out of this rut is a simple but difficult sensation that can often help clubs mask all deficiencies.

For premiership points to start tallying up for the boys in the red, gold and blue, the buck must stop with this draft class. 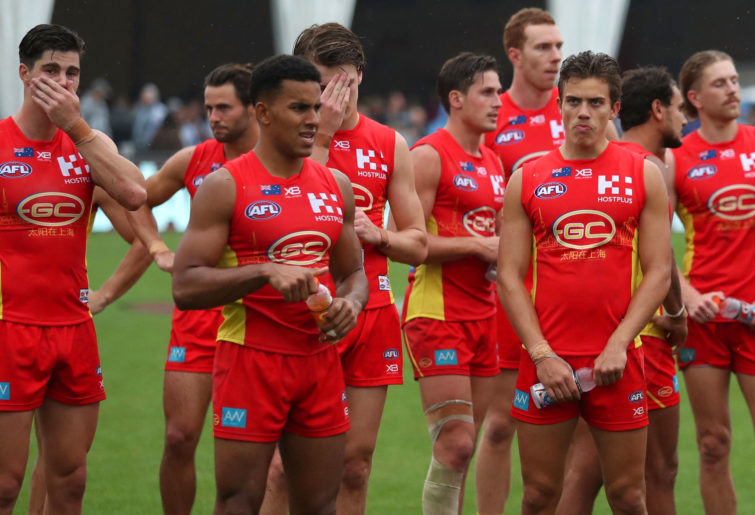 Jack Lukosius. An elite athlete for a boy his size, which has inevitably seen him likened to the great Nick Riewoldt. Lukosius is rated as not just the premier key positional talent from 2018, but possibly the best key position player drafted this decade not named Joe Daniher.

Izak Rankine. A freak indigenous talent who was an All-Australian both as a 16 and 17-year old. Looks born to play in – and impact – the biggest games of all. In years gone by – before age limits were introduced – Rankine would have been the type of talent that had an impact as a 17-year-old.

Ben King. The best key defender from this year’s group, King looks to settle in at fullback in a rebuilding Suns backline. Has the potential in the future to take games away from teams either in defence or up forward.

Gold Coast haven’t made it easy for themselves, but if they are to finally set things straight, these three potential generational talents have to stick around for the long haul. Or, at the very least, be convinced to do so.

Making things even more difficult will no doubt be the continual inquiries put forward by the two South Australian clubs in regard to the willingness of Lukosius and Rankine to return home.

As previously mentioned, winning will make those three players – as well as everybody else – feel a whole lot better about being a professional footballer on the Gold Coast.

The Gold Coast Suns simply cannot continue to mess this up. They cannot afford to lose these three players in two or three-years’ time in favour of stocking up on top ten draft picks once again.

That would be the very definition of insanity.