A team full of NBL players might still have qualified Australia for a FIBA World Cup this time four years ago but the commitment, dedication and organisation of this current group playing for the Boomers only highlights further the growth of the league.

While there might only be anywhere from one to four NBL players who make the final squad for next year’s FIBA World Cup in China, the commitment shown from the 24 players used during the qualifying period has to be admired.

It wasn’t without the odd hiccup including a surprise loss to Japan and of the terrible physical assaults hurled upon them in the Philippines. But right throughout it was a Boomers team committed and focused to represent Australia with pride.

Most of them will end up making way for the likes of Ben Simmons, Matthew Dellavedova, Aron Baynes, and Joe Ingles, if they are made available for the World Cup. But not once were any of the NBL players representing the Boomers worried about that.

The Boomers proved the dominant team in Asia through the qualifying period and head into that World Cup in September as genuine medal chances.

What it does is further highlight how far the NBL has come. The league is now a far smoother running machine, the league is organised enough to build the FIBA windows into the season and the work between Basketball Australia and the NBL has ensured it’s been a well-run process.

That leads to greater commitment from the players who come together after being rivals the week before and after on the NBL floor to bond as teammates, and it shows with the way they play.

Coach Andrej Lemanis’ system is perfect for international basketball and he has brought in players who thrive in that system – from guards Cam Gliddon, Jason Cadee and Nathan Sobey to bigs like Matt Hodgson, Angus Brandt, Daniel Johnson and then this past weekend Nate Jawai. 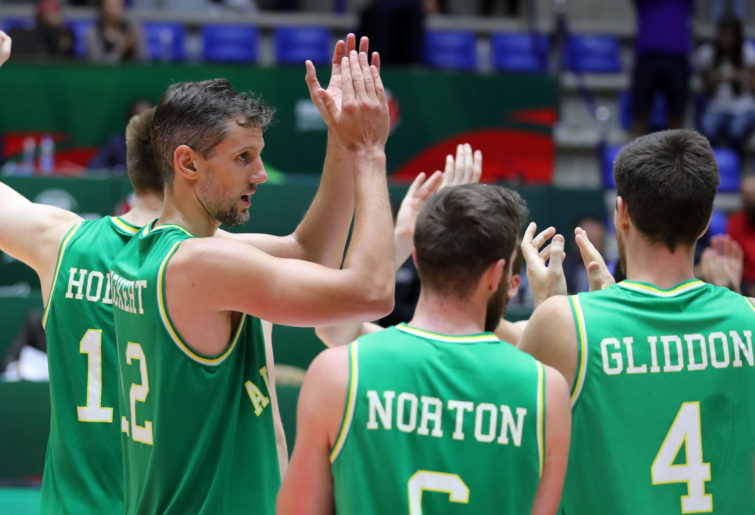 Lemanis couldn’t be prouder of the commitment shown from every player involved over the qualifying period for the Boomers.

“This current qualifying format has exposed a whole bunch of players to the international game of basketball,” Lemanis said.

“We’ve had 24 players through and it’s been a fun and rewarding experience for me to watch each one of them grow at different times in this environment, and to see how much it means to them to play in the green and gold and see the reward for what they’ve put in during some of their junior careers and in the NBL.

“That’s been really fun and I couldn’t be more proud of the body of work these guys have put together and the way they have represented Australia on the international stage. We’ve done it with class and with some skill, and all Australians should be pretty proud of this group.”

Cadee is one player who has done a tremendous job running the point for the Boomers throughout the campaign and then he broke out for 21 points and five three-pointers in Monday night’s big win over Qatar in Melbourne.

He has also joined Lemanis at the Brisbane Bullets this NBL season so he enjoys the way his coach goes about their business, and he has no doubt their bond was formed even stronger after what they all went through in the Philippines.

“It helped our whole group because we sat there the next day and looked at each other, and knew that everyone had each other’s back. That will stay with us as long as we’re together, especially with Drej,” Cadee said.

“I know he was shaken by the whole incident and he felt like it was his fault that we were put in that situation, but I’ve loved every minute of working with Drej from the day I started working with him. I’m sure I’ll continue loving it moving forward.”

For Lemanis, coaching the Boomers continues to give him quite the workload and a juggling act to deal with while still being in charge of a team at the NBL while also leading Australia into an upcoming World Cup and Olympics campaign where medals are hoped for.

But what he found when first appointed national coach, and he gave up his role with the New Zealand Breakers, was that he missed that daily grind of coaching his own team.

So while it’s added work for him, he wouldn’t have it any other way.

“In the first 12 to 18 months there was a lot on for sure but as a coach it’s good to have a lot on because it means you’re employed,” Lemanis said.

“When I talk about creating our environment, to be able to recruit good players some of that comes because of trusts and relationships built through that environment.

“There’s always plusses and minuses with every situation, and the one who probably suffers the most is my wife. She’s the one who doesn’t see me and we don’t get to go on holidays. That’s just the way it is for now and it’s a lot of work but good fun.”

The NBL resumes this Thursday night with a blockbuster between the Sydney Kings and Perth Wildcats with Round 8 extended until Monday night where Melbourne United hosts the Brisbane Bullets.