They poached top players from their rivals in the offseason, consistently won matches they looked cooked in – and are now turning it on in the finals.

If that doesn’t make Sydney Chiefs the Hawks of the esports world, I don’t know what does.

As much as rival fans might have enjoyed watching this outfit struggle their way through the regular season, there’s no denying the sleeping giants are wide awake – and they could be set to steal that elusive maiden Elite Series championship from right under their opponent’s noses.

Coming into semi-final weekend at the Gfinity Elite Series, there looked to be one CS:GO contender and one contender only.

That team was Perth Ground Zero, who finished the season atop the standings having lost just the one match – which was played with a lineup of reserves.

Their achievements throughout the esports tournament were well-documented; they’d smashed the Chiefs 16-2 in the first week of the competition, while the 16-0 bath they gave reigning champions Melbourne Order in will be talked about forever.

The Chiefs, on the other hand, only qualified for the top four by the skin of their teeth. A lacklustre start to the season saw them demolished by Ground Zero and put away comfortably by Melbourne Avant too.

They battled well to claim three wins over the following three weeks, but they were all exceptionally close victories over opposition they should’ve been swatting aside.

With the beginning of the finals bringing with them a shift to a best-of-three format, map picks were always going to be important, and Ground Zero looked to have it all figured out.

They let the Chiefs have their main choice, Train, for the second round, but backed themselves heavily on Dust II and Mirage either side of it.

Nothing could have prepared from for the first-half barrage they were in for. 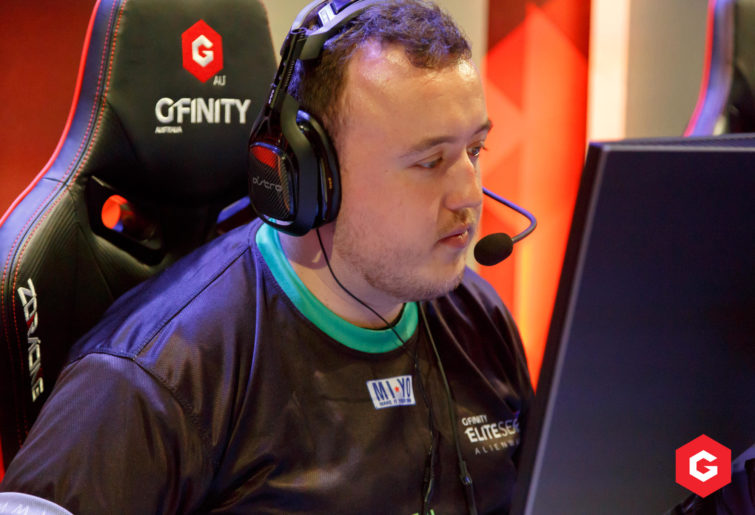 BURNRUOk and Ground Zero were bundled out in the semis. (Photo: Gfinity Australia)

From the get go, it was obvious the Chiefs were communicating more. The body language was up, the talk was constant and the results came with it. It’s not a stretch to say they just looked like they were having a lot more fun this weekend.

Four straight round victories set the tone, with the first-half rampage putting the scoreboard 10-3 in Sydney’s favour at one point.

Ground Zero finally got their bearings in the shadows of half time, and a strong effort in the second stanza saw them fight off five of the seven match points they were up against, but the Chiefs were deserved Game 1 winners, 16-13.

The script got flipped in the second game, however, with Ground Zero’s superb T-side on Train and clinical CT performance helping them level the best-of-three with an upset 16-10 win on the Chiefs preferred map – but the twists didn’t stop there as we headed to a third and final match.

Perth got themselves ahead 6-3 in the early goings, and would have had one part of their mind on next week when they led 9-6 at the half. They even held three match points with a 15-12 lead, but the Chiefs were up to the task, knocking down the final three rounds and coming from behind in overtime to claim a memorable 19-17 map win and 2-1 match win.

It’d be easy to look at the close score – another knife’s edge Chiefs win – and say they got lucky. But, you’d be wrong.

It cannot be understated how significant the turnaround since the first week has been for this side; for them to dig deep and stave off three match points against a team that tore them to shreds not too long ago is nothing short of stunning.

Far be it for to me to claim they were disinterested during the regular season, but the fact they had the mental fortitude to fight from behind against a top team – where in the past they’d been spurned into action by a lesser side getting too close for comfort – is encouraging too.

But it’s not just overarching seasonal trends that suggest Chiefs could be building something big – their performance within this match was far more dominant than the score may suggest.

In what was a very much a contest between the (somewhat uncharacteristically) structured and disciplined Perth versus the raw and spontaneous Chiefs, the Sydneysiders won at both games.

The superior skills of the men in blue were evident from the beginning, and Ground Zero just couldn’t get the Chiefs to respect or bend to their strategies.

Perth weren’t blameless in this phenomenon, however, with their brazen commitment to certain strats proving extremely detrimental. The overtime period of the decisive third match saw them roll out the exact same bomb site approach in two straight rounds – and they got absolutely cleaned up twice.

Sydney knew that, if it came down to a firefight, they’d emerge on top. Armed with that knowledge, they were able to wait their opponents out masterfully, and then often absorb Perth’s pushes when they were forced to make them.

On the occasions Ground Zero got impatient and tried to get aggressive, it blew up in their face – most notably during a disastrous round on Train where the green team lost a five-on-two.

Chiefs captain MoeyCQ said it best in the post-game interview when he claimed “[Ground Zero] should have won that game. There’s no hiding it – they know that.”

The bitterly disappointing end to a season that long looked destined to finish in ultimate triumph will be tough to swallow.

The Chiefs, on the other hand, could face the ultimate test next week if Melbourne Order bring their top team back for the decider. If they can knock off last year’s champions, the importance of hitting form at the right time of year will only be further reinforced.