Both the Roar and the Chiefs were facing off against different teams and the general consensus is that we’d see these two Sydney teams meet next week for the finals. This wasn’t certain, however, as both Sydney teams have chosen to run with their B rosters for some games during this season.

When they aren’t using their top people, victory just isn’t certain giving both Brisbane Deceptors and even Melbourne Order a chance at moving on to the finals.

The first game of the weekend saw the Deceptors face off against Chiefs. The Brisbane team has been what you could almost call deceptively strong lately and were sitting on top of the ladder after their last 3-0 win against the Sydney Roar’s roster.

What it would take for Brisbane to win this aside from Sydney having a bad day is for Jake, their veteran super-star to bring his team together. This man has done wonders using not only his playing skills but also his coaching abilities to help bring this young team together.

To even get them this far is a massive achievement and it would take his every effort to see them win over the Chiefs to make the finals.

Jake is also former teammates with the members he was facing off against in the Sydney Chiefs so any insight he could bring would only give his team an edge.

The first game saw relentless efforts from both teams trying to secure the opening goal. It seemed like neither team could do anything to score despite some near misses and a lot of attempts from both sides.

It wasn’t until the last 30 seconds where Kami from the Sydney Chiefs attempted a shot which bounced straight off the backboard and into team member Drippay. Drippay attempted a shot of his own which bounced back to their other teammate Torsos who secured the goal. A full team effort from the Sydney Chief’s to pull off the first goal for the semifinals.

Jake followed up getting a goal of his own against his former teammates forcing the game to go into overtime for the first match. This contest for the first match was quickly put to bed when Torsos managed to secure the second goal, winning the first in this best of seven match up for the Chiefs.

This set the pace for the rest of the games as while Deceptors did well getting in a few goals here and there, overall victory would be the Chiefs, as most predicted. The second match came down to a 3 – 1 win in favour of the Sydney team

A break seemed to see both teams come back reinvigorated and the Deceptors managed to steal away a game from the season in a close 3-2 match. Unfortunately, this would be their only win as the Chiefs continued to plug away and just outplay their opponents.

Eventually, it came to a close with the Sydney Chiefs holding a 4-1 hard fought victory over Deceptors and moving on to the semi-finals.

Who would be their opponents next week was still to be decided in the second set of games for the weekend when the Sydney Roar faced off against Melbourne Order. This felt like one of the stranger matches as the Order only managed to just sneak their way into the semifinals matchups thanks to last week’s win over the Chief’s B lineup.

They’ve been a fairly inconsistent team sitting at the bottom of the ladder for many games but holding a few moments of brilliance here and there. It seems like the Order is a team that can really bring it but are shaken easily.

Zen, in particular, is also an incredibly dominant player who carries a lot of the weight for his team members when he performs. They have had a streak of wins lately but it would still be a tall order for them to be able to beat the Roar and the Sydney team proved why in these final four games.

It’s important to remember that The Roar has been doing a bunch of swapping with team members across these matches and this time it seemed they were running one of their stronger rosters. Because of this, it’s particularly hard to look at past games and really get a feel for how things are going to play. Running the incredibly strong team lineup of CJCJ, Shadey, Express ensured they had a strong victory over the Order team.

Express scored the first goal after a stellar pass from Shadey for the Sydney Roar. This was after some tries from both teams but the aggression from the Sydney team just couldn’t be denied.

Order did manage to get a goal of their own with a sneaky top corner goal from Julz pushing the game into overtime. Eventually after over a minute and a half of overtime, the Roar won the first game by rolling a ball into an undefended goal.

The following game was close with the scores going back and forth throughout the match. Just before the game turned to overtime the Roar secured the second game but only just, with a shot at the net in the last seconds.

While these matches consistently went to the Sydney team, they were close and really good to watch. You could tell we were finally in the semi-finals of this competition. 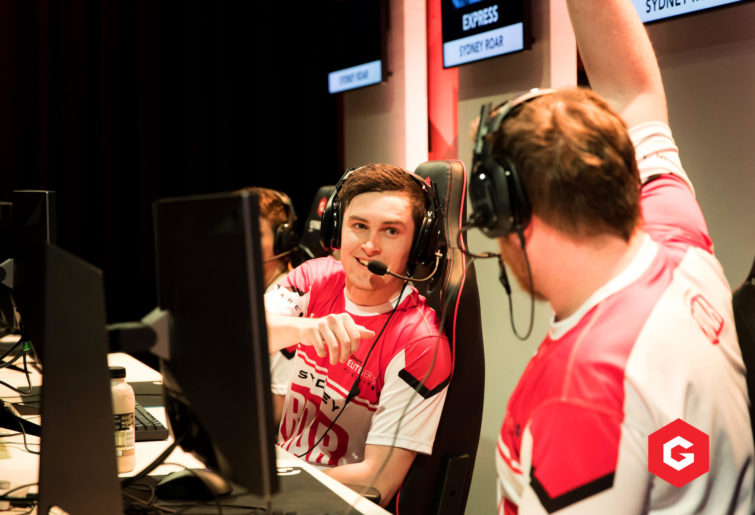 The third match started to see some real separation between the two teams. While the games were still hard fought this time the Roar managed three goals while only allowing Order to score one goal.

Despite the absolute best and commendable efforts from Melbourne Order in the end Sydney were just far too strong. The fourth and final game was won with Sydney seeming to dominate control on the fields. The score for this game was only 2-1 but it really felt like Order were already defeated and the Roar really had the confidence from the previous matches to take out this game.

The final 4-0 result isn’t really indicative of what we saw on the field but the result is the same. Two Sydney teams will face off in the finals just as we had expected from week one of this competition. It’ll surely be a massive match to watch with the home crowd in the Hoyts arena to watch the game live.