When the Gfinity Elite Series esports competition kicked off in June of this year, it was Melbourne who rose to the summit.

The more well-known of the Victorian clubs – Order – conquered all before them in not one, but all three tournaments as they rubber-stamped the city’s bold claim as being Australia’s esports capital.

The second season of the Gfinity Elite Series is set to come to a close this weekend and, while Order have managed to reach two of the three grand finals again, all eyes will be on the Sydney Chiefs as they look to sweep the deciders and move Sydney’s esports scene back to the forefront.

With two mouth-watering clashes between Order and Chiefs – arguably Australia’s ‘old firm’ esports rivalry – and an intriguing Sydney derby in Rocket League, the grand finals are sure to provide some of the most fiercely-contested action we’ll see on any 2018 sporting calendar.

Who’ll come out on top? Let’s dive in.

Grand finals between traditional rivals are always something to look forward to, but it’s even spicier when the decider in question is a rematch.

That’s what esports fans will be treated to on Saturday as Order and Chiefs face off in the CS:GO grand final to kick the weekend off.

It’s been an especially interesting recent history for these teams, with an overtime thriller to conclude the first season going Order’s way, while it was the Chiefs who prevailed 16-14 – the tightest possible CS:GO scoreline – in the final week of this season.

In between those matches, however, will be the one that sticks out in both teams’ minds – a dominant 3-0 best-of-five sweep by Melbourne in last season’s big dance.

Sydney will be out for revenge, but whether they can exact it or not may be out of their hands entirely.

While these teams were by far and away the top two CS:GO sides a season ago, the going has been a lot tougher this time around.

The Chiefs took an eternity to get going, with horror 16-2 and 16-8 losses to Perth and Melbourne Avant getting their season off to the worst possible start, before thoroughly unconvincing wins over bottom teams Brisbane and Sydney Roar got them back to an even ledger.

They snuck into the finals in the last game of the season with the aforementioned narrow win over Order, but found another gear in the semis last week with a sublime victory over first-place finishers Ground Zero.

A recent victory over their grand final opponents would be cause for buoyancy – but that’s where things get tricky.

While it’s true that Chiefs won the earlier clash between these times, it could be an entirely different Order side that takes the stage on Saturday.

Order’s season has largely lived or died by the availability of their top line-up, who are often tied up with international commitments.

That top side tore the Roar and Avant to shreds in their two matches, but the backup team have found the shoes slightly too big to fill. Losses in two of their three regular season appearances would have been concerning, but they too found something special in the semis with an upset win over Avant.

The draftees are capable of taking it to the Chiefs as it is, but if the superstars return, they become hot favourites.

It’ll be an all-Sydney affair on Sunday morning when the Chiefs and Roar go head to head in the Rocket League decider, but that’s not the only subplot giving this fixture intrigue.

As far as the Chiefs are concerned, this game is all about redemption.

With their Rocket League team arguably the most internationally accomplished squad at the Elite Series (across all three tournaments), it was nothing short of astonishing to see them booted from the semi-finals last season by a completely unheralded Melbourne Avant team.

It was Geelong in 2008. It was Richmond this past September. Nobody saw it coming – least of all the losing team.

Fortunately, they’ve only had five months to let the disappointment burn and, after an admittedly stop-start second season, have the chance to finally put their hands on a trophy they’d think is rightfully theirs.

For the Roar, on the other hand, this is about putting the cherry on top of a stunning turnaround from last season’s misery.

Following a rough debut season where they looked totally out of their depth, the team went out and poached a talented roster from Tainted Minds, and have enjoyed immediate success.

We knew a new contender was in town in the first week after the new-look Roar put reigning champions Order away quite comfortably.

While they, like Chiefs, didn’t put their foot down as the team to beat, they’ve certainly been a cut above the rest – with a 3-0 win over the Chiefs earlier a huge confidence booster.

The Roar certainly have the talent to knock off their crosstown rivals and walk away with the trophy, but nobody will be hungrier this weekend – in any grand final – than the Chiefs.

To cap off the already enthralling weekend, we get two teams who already have beef duking it out for the ultimate prize.

It’s no secret Order’s Street Fighter team has the biggest mouths in the league, and none is bigger than RoF’s.

The keen showman has backed up all his trash talk and onstage antics with absolutely superb play, but it still hasn’t escaped the eye of his rivals.

Earlier this season, we talked to Chiefs player DaBigChoppa and he said he “just [wanted] RoF to shut up.” 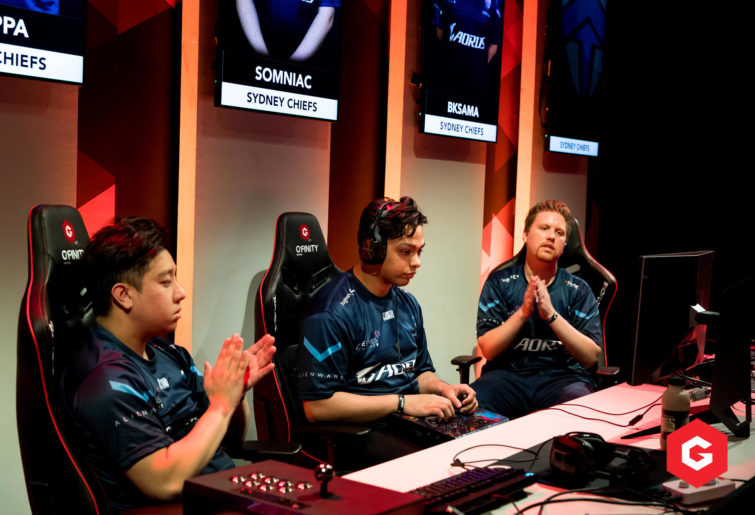 DaBigChoppa (centre) is keen to take down the champs. (Photo: Gfinity Australia)

“I like the character though, he’s a character, but I just wanna put him in his place.

“He does a lot of stuff (in-game) that he gets away with and people are not blowing him up for it.

“I know if I get put up against him he’s gonna get shut down for all of his dumb stuff. I’m not talking **** – I’m just stating how I feel.”

If seeing how that all plays out isn’t a reason to tune in, then I don’t know what is.

As far as the game itself goes, this is one of the hardest ones to call.

Both sides breezed through most of their opening matches – with their only loss each coming against top team Melbourne Avant 4-3.

But a convincing 4-1 Order victory in the final week of this season gives them favouritism here.